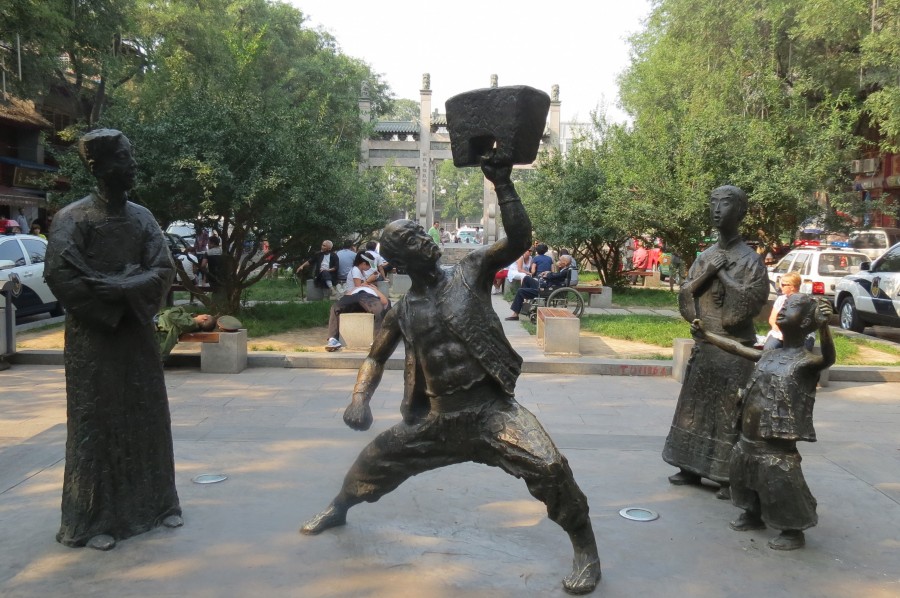 China Eastern Airlines to Xi’An, the eternal capital of China !

China Eastern Airlines to Xi’An, the eternal capital of China!

Read our previous posting “Beijing China … A hutong and the Olympic Park!”

This morning’s breakfast at the Horizon Club lounge of the Shangri-La Hotel Beijing was somewhat of a challenge. None of the staff on duty at the lounge spoke English! An order for an english breakfast with scrambled eggs, tomato, mushrooms and bacon resulted in a platter where all of the above had been cooked together. Lynn’s “brown toast” request resulted in a platter of french toast. A request for “dark toast” brought out the chef, who nodded in understanding, which somehow led to two platters of cooked tomatoes making their way to our table!

We then had to crawl our way to the Beijing airport in the middle of Beijing traffic, which was awful this morning; it took us almost two hours. Lynn and I took that opportunity to learn from our guide how to order breakfast in chinese so that our experience earlier that morning would not be repeated.

Our guide had told us that the chinese currency bills which I had arrived in China with, saved from my last trip to China about fifteen years ago, had become quite valuable since the current bills were different and my bills had become collectors’ items. So when we left him at the airport, I gave him a special tip made up of those old bills, which he said he would save for his grandchildren.

Xi’An (which means  Western Capital), about 750km southwest of Beijing. Xi’An, now a city of about eight million people or a small town by Chinese standards, is considered to be the middle of the country, separating east from west, north from south. It is a proud and ancient city, and was the capital of China for many centuries; during the Tang dynasty and several dynasties after that, when it was called Chang’An (Eternal Peace), the city was the largest in the world. It became the starting point for the famous Silk Road to Europe.

The Xi’An airport is new, gargantuan and empty, ready to receive the billions of chinese yet to be born. My mobile hotspot is working perfectly, so we continue to have internet access wherever we go. David, our guide, tells me that the city is about 91% Han, which is about the same as the whole country, and 10 to 15% muslim. Apparently, the one child policy only applies in China to the Han, not to the minorities. And he corrects me on Shanghai being the most populous city in China; no, it’s Chongqing with its thirty million people which takes the cake.

Talking of cake, guess what was waiting for us when we checked in at the Xi’An Shangri La hotel. Yes indeed, another cake with a happy 40th anniversary card, another box of dark chocolates, a bottle of wine, a basket of fruit, a vase of beautiful lily flowers, a second box of chocolates (!), as well as the “welcome back, Mr. Gagnon” greeting and the traditional welcoming pot of tea. The Shangri La hotel tradition of providing you with a pot of hot tea upon arrival has always been dear to me.

I would have expected the tea to be perhaps the best known local tea, the White Monkey tea  of the Xinling mountains south of Xi’An, so named because trained monkeys are used to pick the tea leaves from the steep mountain slopes. No, the welcoming tea at the Shangri La hotel is always the same, and the flavor of the tea is unique for me and brings back so many happy memories of the past. Just by sipping this tea, I am transported to the Kowloon Shangri La in Hong Kong and the beautiful floor to ceiling nighttime view of Hong Kong island. This time, I am determined to find out what type of tea this is so that I can try to get it back home. By the end of the day, I had managed, I think, to identify it: Jasmine Green Tea from the Boh Plantations in Kuala Lumpur, Malaysia.

Our first adventure is Xi’An is to walk the Muslim quarter in the center of town, and in particular Hua Jue Xiang (alley), near the drum tower. The goods on offer on the various stalls seem to be the same: an incredible variety of zuo (dates) all priced differently based on quality, which county they come from, etc…; lots of hetao (walnuts); shiliu (pomegrenate) which is in season at the moment. As for food, there are many stands offering shizibin (parsimmon cake), xianbin (filled in pie), and yellow bean cake. And a couple of restaurants offering the most popular dish in town, yangrou paomo (mutton soup), which is on our program for tomorrow lunchtime.

We then proceeded to the Hang Tang Tian Xia restaurant for a lesson on how to make jiaoze (dumplings), the most famous specialty of Xi’An. I had asked our guide why Xi’An was famous for dumplings when there were so many other places in China and Hong Kong where dumplings were popular; he told me that this was because of Xi’An’s winter wheat, which is regarded as providing the best flour in China for making dumplings. Little did I know that the stuff was made of wheat flour, water and salt. Lynn already knew it all and had no problem showing the chef her skills at making dough, filling it with pork, closing it and shaping it into all sorts of shapes.

Read what happens next at “Terracotta Warriors of Xi’An!”

« Beijing China … A hutong and the Olympic Park !
Terracotta Warriors of Xi’An ! »