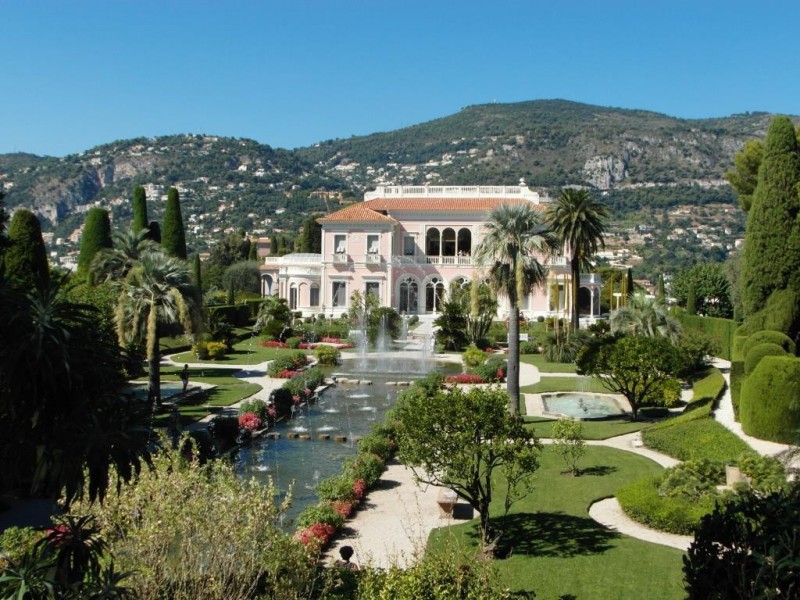 Read our previous posting at “Salade Nicoise et cuisine nissarde : The best of Provence and Italy!”

Whenever we rent an apartment in a large city somewhere in  the world or stay for an extended period , as we have done a number of times so  far in Paris, London, Rome, Florence, Buenos Aires, etc..,  we try to divide our touring up by sections  and dedicate a whole day to each part of town or suburb. That is also the plan for  our upcoming trip to Nice, and my initial look at all there is to see and do in the region is that, if I am not careful in my planning, we will run out of days!

Between Cannes and San Remo, each of which will warrant a day, and Nice itself, which warrants at least three days, I should normally have to reserve at least a day each for Antibes, Juan les Pins, Saint Paul de Vence, Villefranche sur Mer, Saint Jean  Cap Ferrat, Eze, Beaulieu sur Mer, Menton, and Monaco, all of which are within one hour at most from our Nice apartment. That’s already fourteen days!  When do I have time to simply waste the day  strolling on the Promenade des Anglais and putting my feet up on the beach? And what about my idea of making a little side trip to Corsica, since Nice is a port for several ferries going to and from Ajaccio, Calvi and other ports in Corsica?

Take Saint Jean Cap Ferrat, for example. Set on a beautiful  peninsula in the eastern suburbs of Nice, it would usually justify a nice walk  all around the peninsula to take in the incomparable sea views. It should be said that the price of real estate in this area is by far the most expensive anywhere in the world, several times the price per square meter one can find in New York, London, Paris or Tokyo. Since I could not manage to get an invitation to either Bill Gates’ villa or King Fahd’s small palace nearby, Lynn certainly will insist on visiting the Villa Ephrussi de Rothschild, one of the most magnificent villas on the Cote d’Azur. Built at the beginning of the twentieth century on the narrowest part of the Cap Ferrat peninsula, the villa and its gardens occupy a large piece of land with incomparable views of the Mediterranean.

Beatrice Ephrussi de Rothschild, who was the heir to the vast fortune of her extremely rich banker father Baron Alphonse de Rothschild, fell in love with the area after she visited Villa Kerylos nearby in what is now Beaulieu sur Mer, a Grecian style villa being built by her husband’s cousin, Theodore Reinach. Later separated from her philanderous and gambling addicted Russian banker husband Maurice Ephrussi, the Baroness divided her time every year between Deauville, Paris and Monaco, and also traveled the world to build up her art collection of great masters. She had her own private zoo on the property, raised horses, and was not only a good tennis player but even joined a flying club. She apparently knew how to throw a party; the poet Andre de Fouquieres wrote: “I remember, in particular, one summer night, when we had the privilege to see, in her gardens, which drew from her mansion across to the sea, and bathed in moonlight, Anna Pavlova dancing to the Chopin nocturnes.”

After her death in 1934, she bequeathed the Villa Ephrussi property to the Academie des Beaux Arts of France for use as a museum, which explains why we are able to visit this beautiful property.

The villa has a tea room and lunch restaurant in a  fabulous circular domed room with floor to ceiling windows as well as a terrace overlooking the  Mediterranean, which is most certainly where I will plan to have lunch that day. I probably need to call tomorrow and make a reservation.                     .

But where should we head to after lunch? How about Villa Santo Sospir and the Grand Hotel du Cap Ferrat, both located in Cap Ferrat?

Villa Santo Sospir is so named because her owner was the  well heeled Brazilian born Francine Weisweiller, who moved to France and who was to become an early  patron for both Yves Saint Laurent and Jean Cocteau. The villa itself has become known in French as “La Villa Tatouee”, the tattooed villa, because of  what Jean Cocteau did to it.

When Jean Cocteau, a very well known French multi-talented  artist, poet, novelist, filmmaker, etc… made a film out of his book “Les Enfants Terribles”, the principal  actress in the film, Nicole Stephane (real name: Nicole de Rothschild), introduced Cocteau to her friend Francine Weisweiller, and the two  of them hit it off immediately. Francine invited Cocteau to spend a week at her villa in Cap Ferrat.

A couple of days later, Cocteau, who is reputed to have said  “L’oisivete me fatigue et me desseche”  (Idleness tires me and dries me up), started decorating the walls and doors of  the villa with frescoes and other art. Apparently, Cocteau kept going and did not stop until the  whole place, including the floors, were covered with his art.

One aspect of Jean Cocteau’s life is of particular interest  to me. Jean Cocteau was very much bi-sexual and is well known for his affairs  with famous women and famous men alike. What I did not know until a few days  ago was that his lover for many years was none other than Jean Marais! Yes, the  Jean Marais. Ok, you don’t remember? Well, when I was a little boy and watched  with excitement the French  swashbuckling  movies of  seventeenth or eighteenth  century  musketeers or other heroes  fighting with panache the evildoers (usually the English), Jean Marais was the principal actor and hero in many of those movies. I was not aware that he was gay, not that it makes any difference. Le Bossu (The Hunchback) is a  movie from those days that I still remember fondly.

Unfortunately, I have an issue with Jean Cocteau, and that  may well make me very reluctant to pay a visit to Villa Santo Sospir. Jean  Cocteau was vocally and loudly pro-Hitler during the second world war, even  going as far as complaining that the French people were being “disrespectful”  towards the Fuehrer! Do I really want to lend any support to such a person by the simple act of visiting Villa Santo Sospir? A moral dilemma I shall have to mull over.

The issue with the Grand Hotel du Cap Ferrat is of a different order. Set at the southernmost extremity of the Cap Ferrat peninsula, the hotel has commanding views not only of the Mediterranean but also on the west side it offers fabulous panoramic views of all of Nice and the bay of Angels. Being in the best location in the best real estate area in the world comes with a price tag for the guests. Just for fun, I checked what the room prices were for the period we were going to be in the area; the cheapest room was about $2,500 per night! We could simply just go eat there, right? Well, yes we could if we were willing to pay $250 for lasagna. This is one I don’t need to mull over; we will walk around it or find something else to do. After all, I already knew as a child that “l’oisivete est la mere de tous les vices” (Idleness is the mother of all vices).