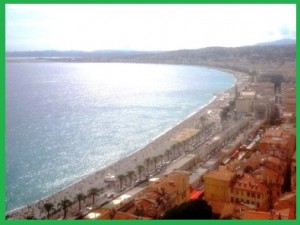 First, I need to clarify that I did not write the story below but copied and pasted it from a website. All credits should go to Margo Lestz, who lives in London and has a second home in Nice, and writes a very interesting blog called Riviera Ramblings: http://blogs.angloinfo.com/riviera-ramblings/

La Baie des Anges (Bay of Angels) is the name of the bay in which Nice France is located. Here’s what Margo wrote:

How “La Baie des Anges” (Bay of Angels) got its name:

Many rich and famous tourists visit Nice every year, but according to a legend, the first visitors were actually Adam and Eve – yes, the ones from the Bible.

They lost their home…   As the story goes, after they were kicked out of Paradise for being naughty, they were standing outside the locked gates looking at their new hostile surroundings.  Everywhere was barren and inhospitable.  They had no idea where to go or what to do.

Led by angels…   Then they heard the sound of rustling wings, looked up to see a band of angels flying overhead and motioning to them.  As they watched, the angels flew across the waters and hovered over a certain spot.  They were showing the couple a glorious bay, in front of a land that was as lush and beautiful as the Eden they could no longer enter.

And where do you think that bay was?  Right here on the French Riviera.  According to some, that is how the lovely bay which fronts Nice got its name, the “Baie des Anges” (Bay of Angels).

Same legend, different city…   Menton, a city just down the coast from Nice, also claims this legend, with one addition.  Apparently when Eve left the Garden of Eden she took a lemon with her.  She was looking for a place worthy of the lovely fruit and when she saw Menton she left the lemon there.  Menton is known for its lemons and has a wonderful lemon festival every year.

Where did they live?…   Well, I can’t say for sure if Adam and Eve settled in Menton or in Nice, but my theory is this:  First, they visited Menton, thought it was beautiful, left the lemon and then saw that Nice was even more beautiful and made it their home.

Why do I think this?  Well, for one thing, their house is still standing in the Old Town of Nice.  It has a magnificent carved frieze depicting the first couple sporting their fig leaves.  They each have some sort of club and it looks like they might be having a domestic quarrel.  It is called “La Maison d‘Adam et Eve” (Adam and Eve’s house) and is at No. 8, rue de la Poissonnerie where the street meets Cours Saleya.  This house is dated 1584 (ok, so maybe the first couple didn’t really live there). Some say that this club-toting couple represents the original owners of the house who were known for their arguments.  Whatever it is meant to symbolise, it is a lovely bit of decoration and easy to miss if you are not looking for it.

If the first legend is a bit too far-fetched for you, how about this one: It has to do with a 15 year old Christian girl from Caesarea, Israel who was a victim of Roman persecution in the year 250.

Killed by the Romans…   They tried to burn her at the stake but it started to rain and put out the fire.  Then they forced her to drink boiling tar but that didn’t do the job either.  Finally they cut off her head and put her body in a little boat which they set adrift on the Mediterranean Sea.

She arrives in Nice…   The angels guided the boat into the same bay where they had guided Adam and Eve all those years before.  The bones of Sainte Réparate are in the cathedral in the Old Town which bears her name in Place Rossetti.  But wait a minute…according to the Cathedral history, her bones arrived in 1060.  So, was the poor girl adrift at sea for 800 years?  I don’t know, but this is another theory for why the bay is called the “Baie des Anges” (Bay of Angels). If the above two legends don’t suit you, how about a fish story?  At one time the bay had many angel sharks in it.  But don’t worry, the angel shark is a relatively harmless shark with fins shaped like wings and they are no longer found in these waters. When the fishermen saw these winged sea creatures they must have thought they resembled angels.  There you have it, the third possible explanation for the name, “Baie des Anges” (Bay of Angels).

So did the name come from heavenly angels or underwater angels?  Who knows?  Personally, I prefer the first legend.  It is more romantic (and less violent). What about you?  Which one is your favourite?

Read our next posting “Barberousse and the woman who saved Nice!”

« Nizza or Nice France ? Cote d’Azur or French Riviera ?
Barberousse and the woman who saved Nice! »