Flower Market, the port and the sea in Nice France!

Read our previous posting : “La Colombe d’Or – Luncheon in the shadow of artists” 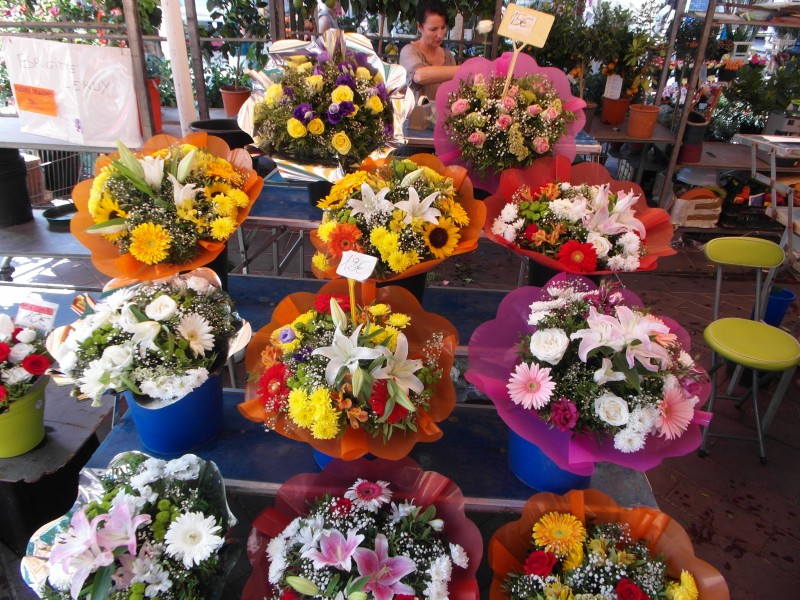 Main events of the day

*Visited the Marche aux Fleurs (Flower Market) at Cours Saleya in Nice and enjoyed some socca, a local food specialty.

*Took a boat tour of Nice, Villefranche-sur-Mer and Cap Ferrat 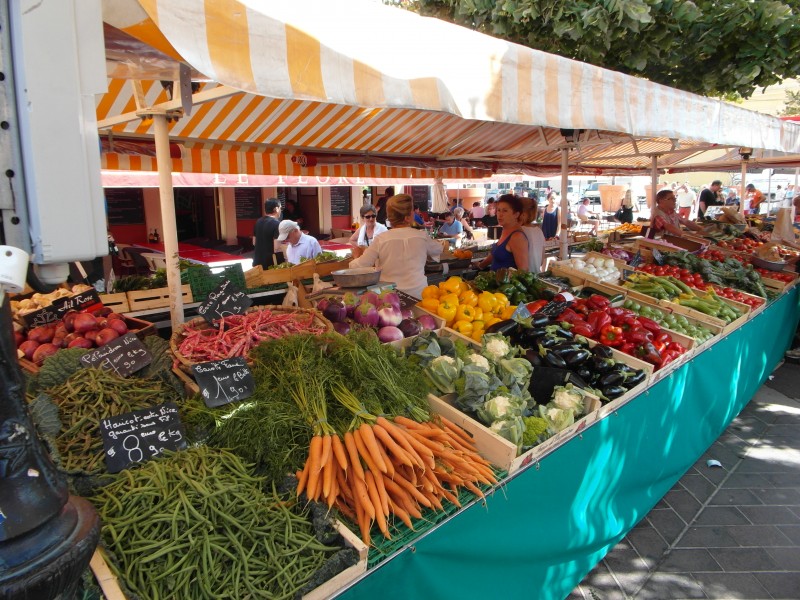 Since we have had a busy first few days in Nice, we decided to take it easy today and go visit the Flower Market. After breakfast, which for me so far has consisted of pain au chocolat, fruit and tea, we walked over to Cours Saleya in old Nice. This is about a fifteen minute walk from our vacation rental apartment, most of it walking thru pedestrian areas lined with bistros and cafes. I continue to be amazed at the number of outdoor restaurants in this town; we must have passed by at least a hundred just to get to Cours Saleya.

Although it is called the Flower Market, only a small part of the market consists of flower stands. Most of the flower market, several blocks long, consists of a food market (except on Mondays when it turns into a flea market). The breadth of selection and freshness is astounding, and Lynn wasted no time in buying enough fruit and vegetables to load me up with heavy bags to carry for the rest of the morning. 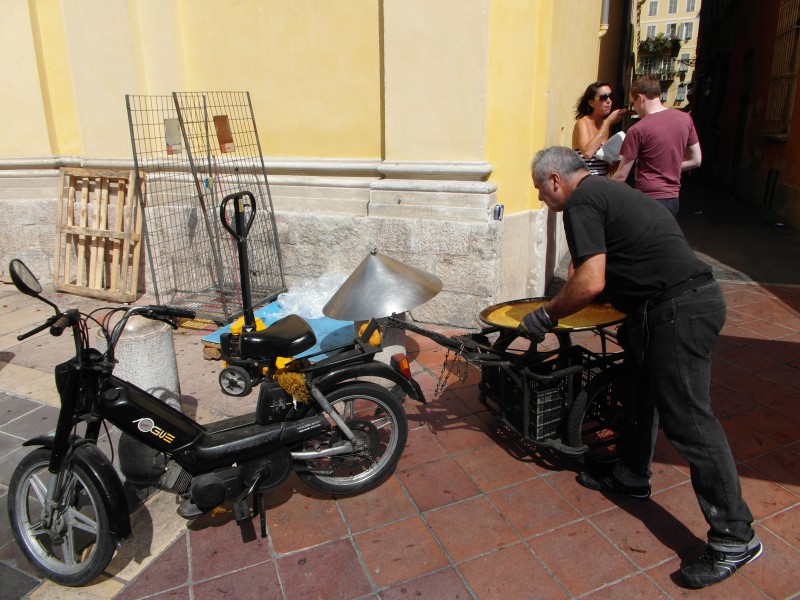 A tradition which quite a few visitors to Nice seem to respect is to eat some socca at the market. The food stand is in front of the church and offers in addition to socca, a type of chick pea pancake, other Nice specialities such as Pissaladiere and tourte de blette. 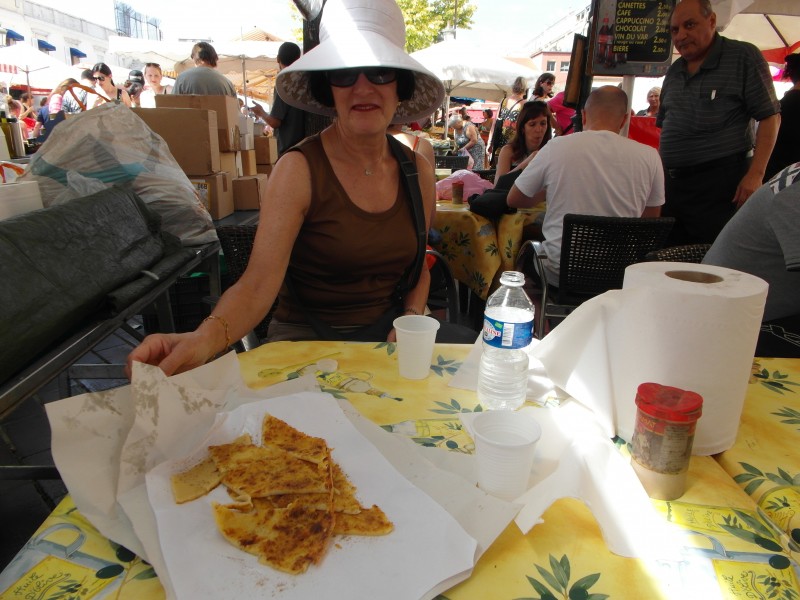 For 3 euros, we got one portion of socca which was more than enough to satisfy our desire to taste this delicacy and also provide me with enough nutrients to handle the twenty minute walk back to the apartment with my load of fruit and vegetables.

The port of Nice

As soon as the groceries were put away, we headed out to the bus stop, a few steps away from our front door. It is quite easy to master the Lignes d’Azur iphone app, which is quite handy in that it will tell you what the next bus to take is in order to get to your destination, the route and the exact times of departure and arrival. So I knew when we left the apartment that a no 7 bus would be at the bus stop two minutes later and would take us to the Nice port in twelve minutes. Well worth the one euro (US$1.30) cost of the ride, don’t you think?

We sat down for a simple lunch at l’Ane Rouge, a gastronomic seafood restaurant on the harbor front. We opted for the menu of the day and for a half bottle of a very refreshing Cotes de Provence Bandol rose. Close to us was the main access road for cars wishing to board the next ferry to Corsica, and it filled up quickly.

Leaving Nice harbor for a boat ride around Villefranche, Cap Ferrat and Nice

After lunch, we had a reservation for a “promenade en mer”, a boat ride which would take us to Villefranche, Cap Ferrat and along the Nice coast as well.  As soon as we left the protection of the port, the winds picked up quite a lot, even though it had seemed from shore to be a windless warm sunny day (by the way, we have just been having fantastic nice sunny warm weather since the first day after our arrival, and the forecast says it will continue that way!).

The summer place of the Zanussis in Saint Jean Cap Ferrat

As our boat went along the shoreline of Cap Ferrat and Saint Jean Cap Ferrat, the tour guide started pointing to one fabulous mansion after another built or owned by a celebrity. Kurt Jurgens, Elton John, Tina Turner, Mick Jagger, King Leopold of Belgium, King Farouk of Egypt, Sean Connery, Bill Gates are but some of the names I remember being mentioned. I suspect that seeing them from the water is the only way we were ever going to see them. Of particular interest, Villa Leopolda (owned at some point by Bill Gates) and Villa Ephrussi de Rothschild are the only two “villas” which have a view both of the Villefranche bay as well as of the Monaco bay on the other side of the Cap Ferrat peninsula.

The port of Villefranche-sur-Mer viewed from the water

We particularly enjoyed passing in front of the port of Villefranche-sur-Mer, a fantastic view in itself, and hearing the guide point out the green awnings of La Mere Germaine (where we had bouillabaisse a few days ago) with the comment that it offered the best bouillabaisse in the whole world!

Hotel Negresco of Nice, viewed from the sea

The boat tour later went along the Nice shoreline, offering us great views of Nice from the water.

Sunset at the Blue Beach restaurant on the beach in Nice

And what better way to end a day than with a good salade nicoise at Blue Beach on the beach of Nice at sunset. It was so heavenly and peaceful … and then I remembered that they don’t have the waves and the tides and the noise of an ocean beach. They have the serenity of the Mediterranean.

*Take a photo of the menu with your phone. It saves having to remember what you ate, which is pretty hard to do as you get as old as we are and particularly if you eat out frequently.

*I cannot recommend highly enough the shirts with hidden pockets which I am wearing on this trip. Six pockets of which five are hidden give me plenty of carrying space for my iphone and my mobile hotspot. More importantly, the hidden pockets under the arms are so well hidden that they provide me with space which is not only pickpocket-proof but also mugger-proof.  A great addition to my hidden cargo pants, which I have been taking on trips for a couple of years now. Thank you, Scottevest, for marking such outstanding products for the traveler.