Eat like a Tsar! Caviar Bar and Restaurant in St. Petersburg Russia

I have very fond memories from my childhood of The Russian Inn in Center City Philadelphia where I was first introduced to Russian cuisine accompanied with some background music and dancing.  Plus my maternal grandmother had come from Russia and often made borscht for us.  I loved it!  But those memories represent a far cry from the reality of today’s Russia.  If you enjoy exploring burgeoning culinary scenes like my husband and I do, then it’s time to plan a trip to Russia, not just to visit L’Hermitage in St. Petersburg and the Bolshoi in Moscow, but also to enjoy some of the culinary extravagances that have recently taken the art of Old Russia into the 21st century.

Since your trip to Russia will most certainly take you to the country’s former capital of St. Petersburg and today’s capital of Moscow, let me recommend a gem in each of these historic cities.  First, St. Petersburg and the world famous Caviar Bar and Restaurant at the Belmond Grand Hotel Europe, a member of the Leading Hotels of the World.

Caviar and Vodka Tasting at the historic Caviar Bar and Restaurant in St. Petersburg 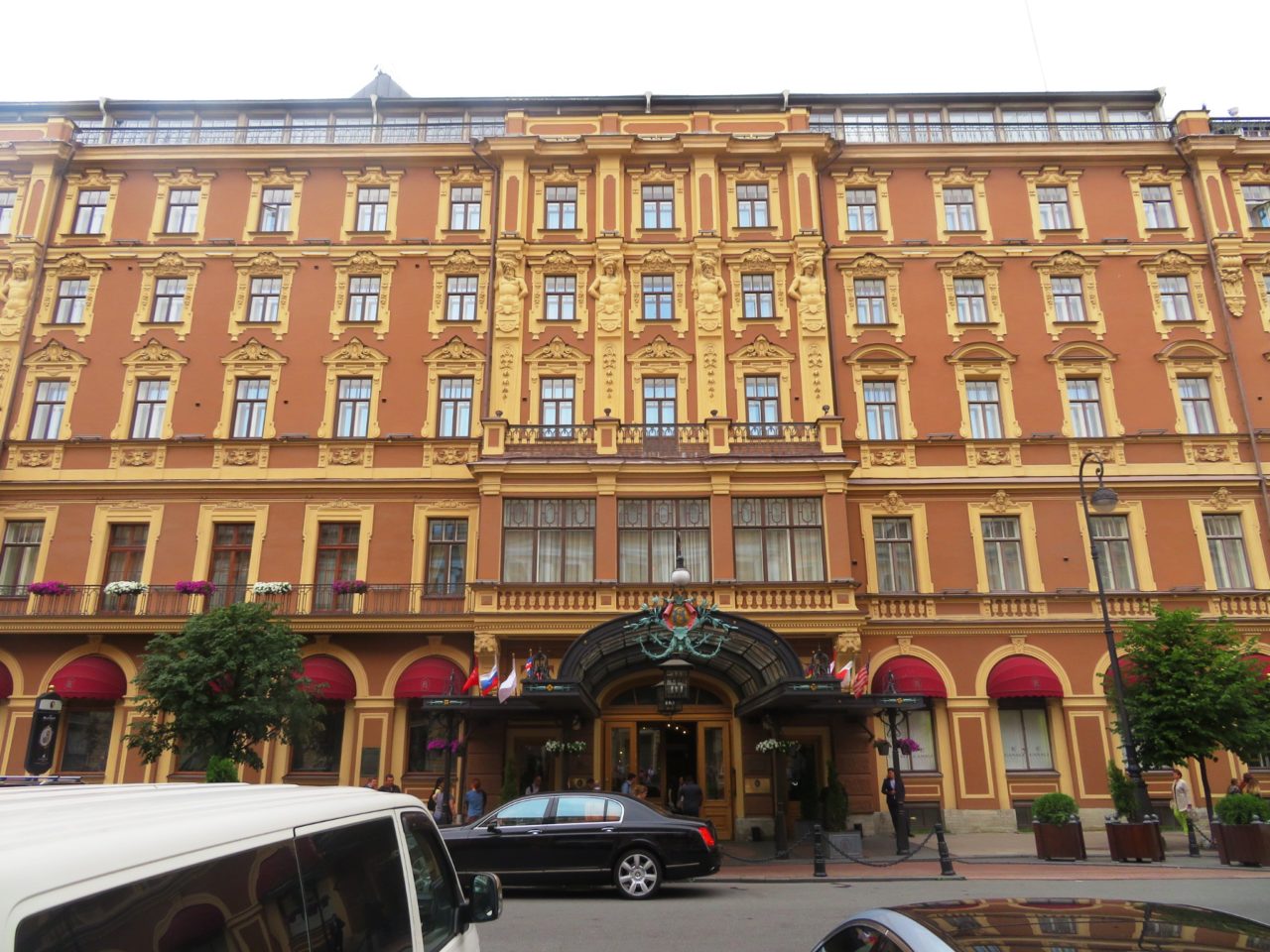 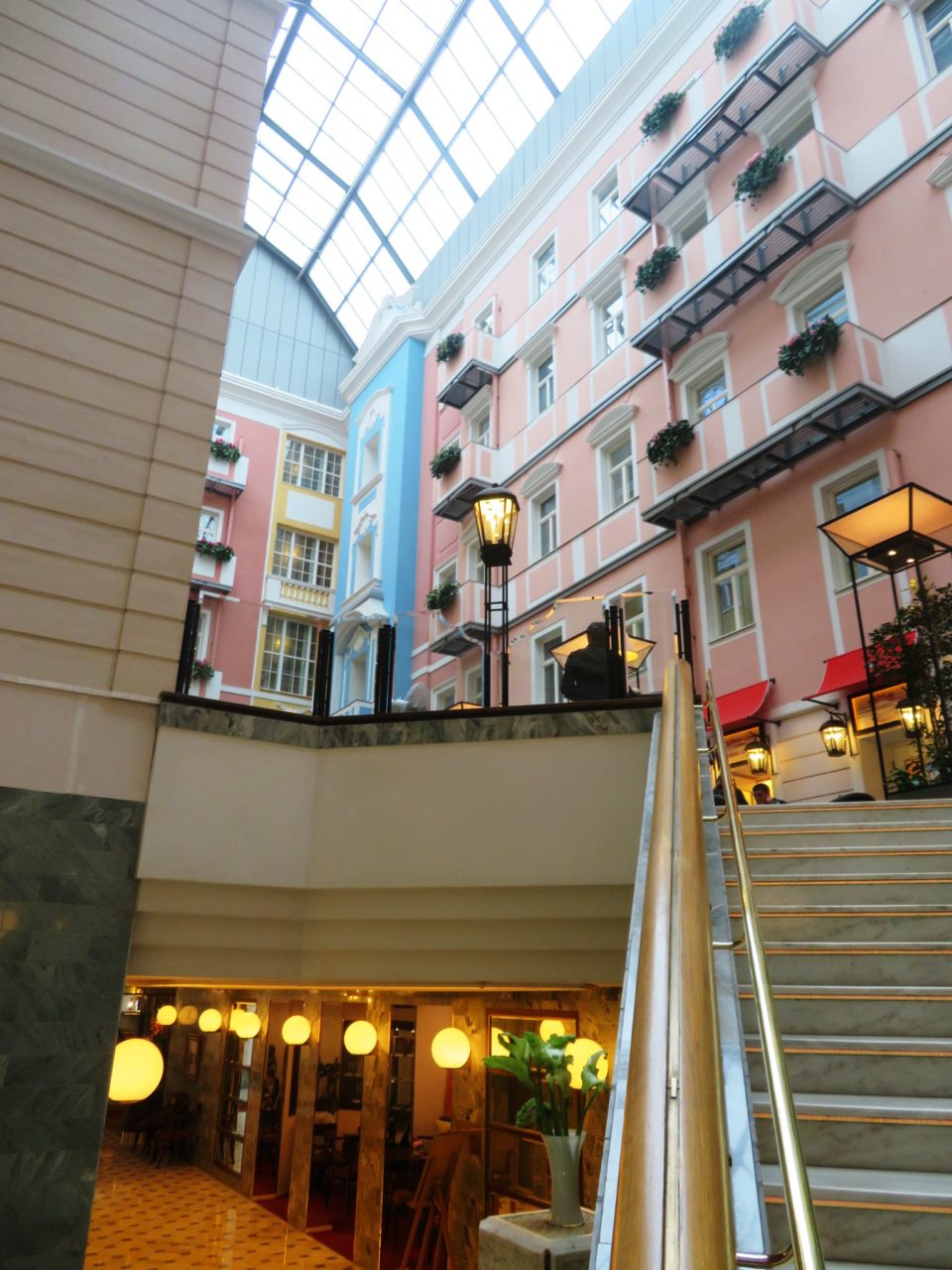 Just off the main boulevard of St. Petersburg, Nevsky Prospekt, housed in the architecturally exquisite Belmond Grand Hotel Europe, is St. Petersburg’s only caviar bar.  If you enjoy caviar and vodka and would like a “taste” of the grand opulence of Russian nobility in the 19th century, then you are most definitely in the right place.  The extensive menu of the Caviar Bar and Restaurant promises a “pure Russian experience” with its mind-boggling assortment of 15 types of Russian caviar, 13 varieties of historical Russian vodkas known as “Polugars”, and 35 types of classical Russian vodkas. 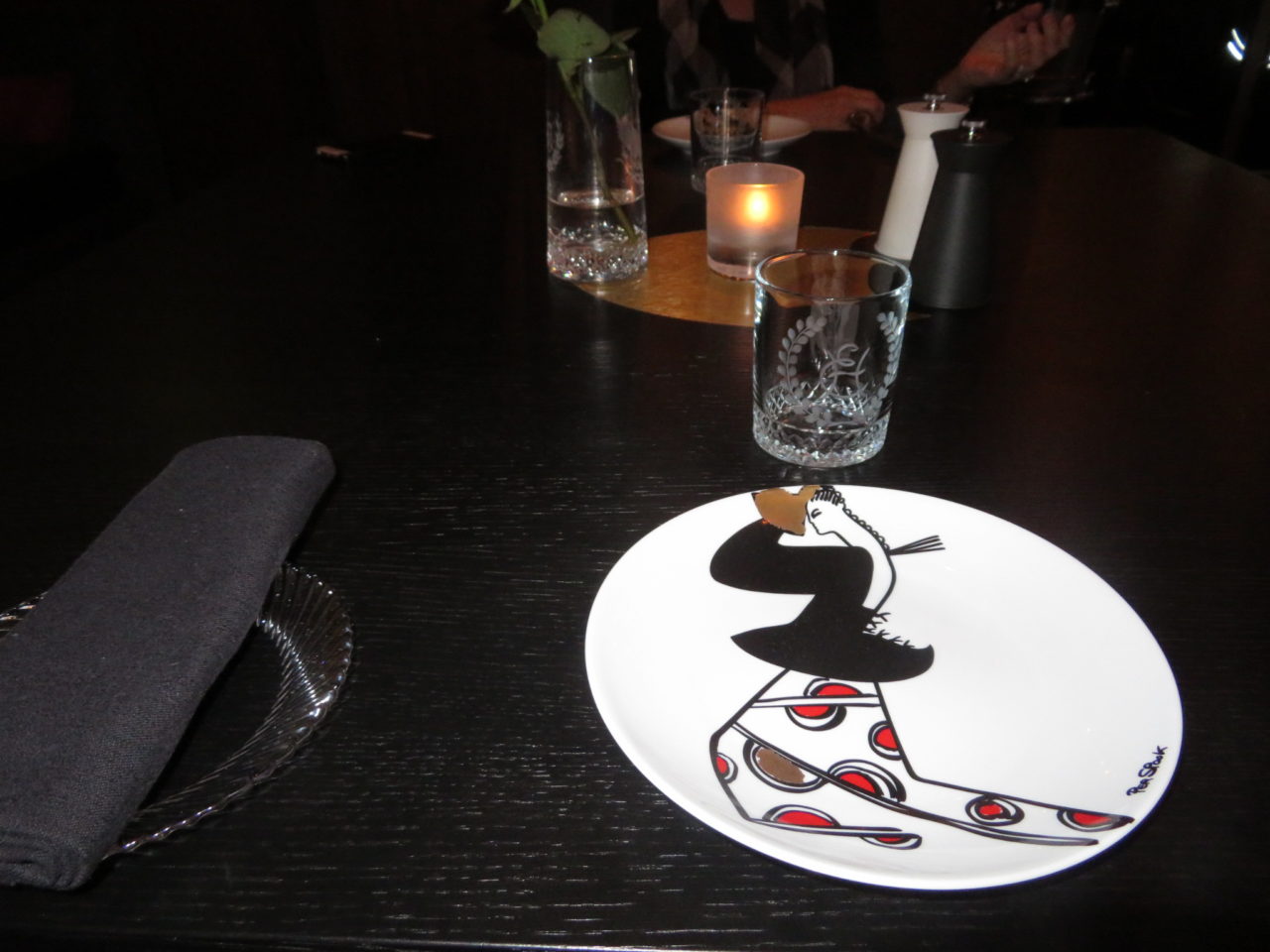 While the Caviar Bar and Restaurant features some vodka and caviar tasting menus, my husband and I opted for a more complete experience including all three of the Russian black sturgeon caviars plus the salmon and pike caviars.  To pair with our caviar selection we chose the Polugar Classic Rye from the historical collection and the Tsarskaya Gold Vodka from the classical collection. 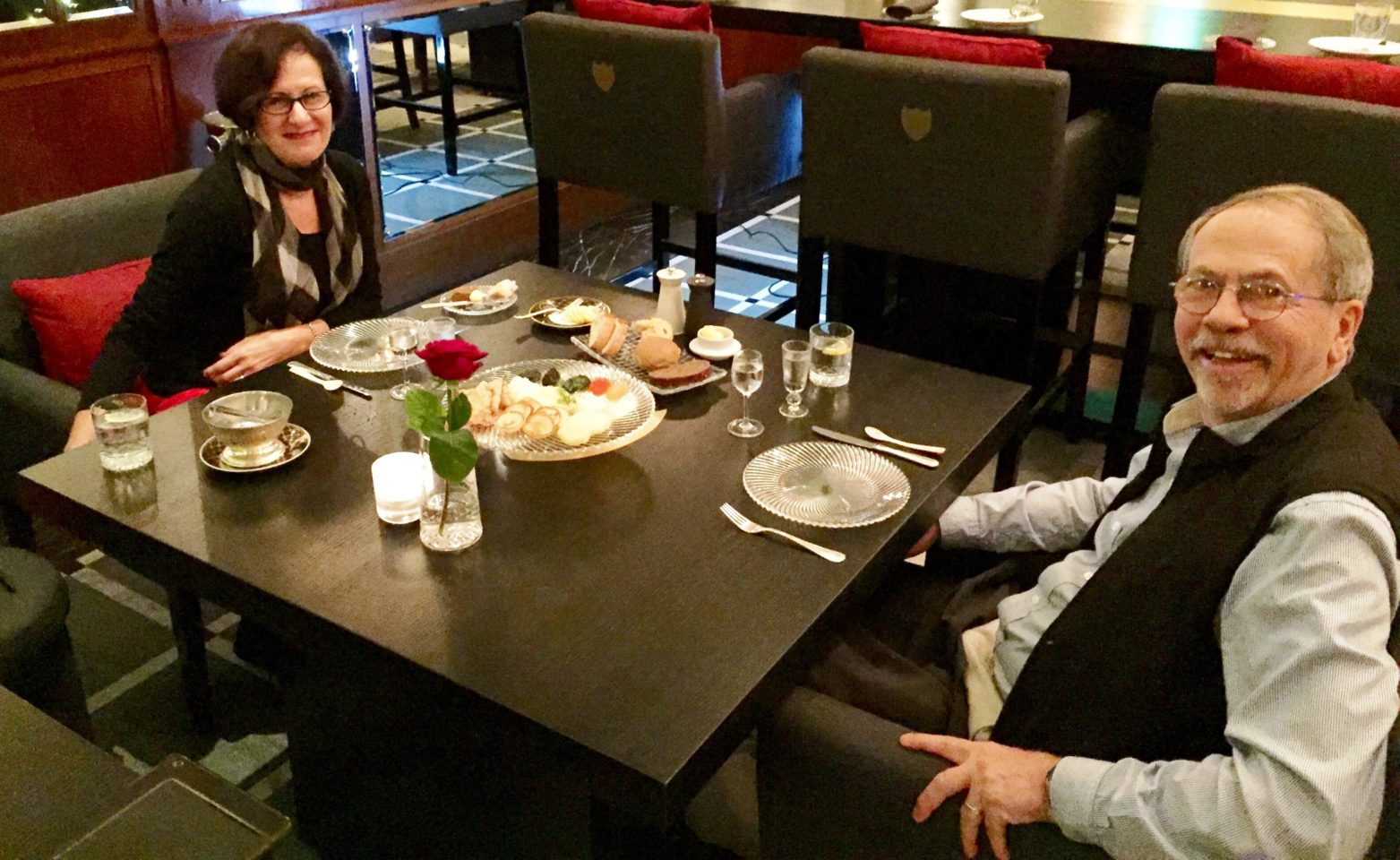 Denis and Lynn at Caviar Bar and Restaurant of the Belmond Grand Hotel Europe in St. Petersburg, Russia

So how did we fare?  As an amuse-bouche to set the stage for the tasting, the chef offered us each a petite version of the hotel’s signature dish of Egg in Egg.  The most elegant egg dish we have every enjoyed, this dish is an egg shell filled with truffle flavored scrambled eggs topped with 5 grams of salmon caviar.  Traditional artisanal Russian breads accompanied Egg in Egg. 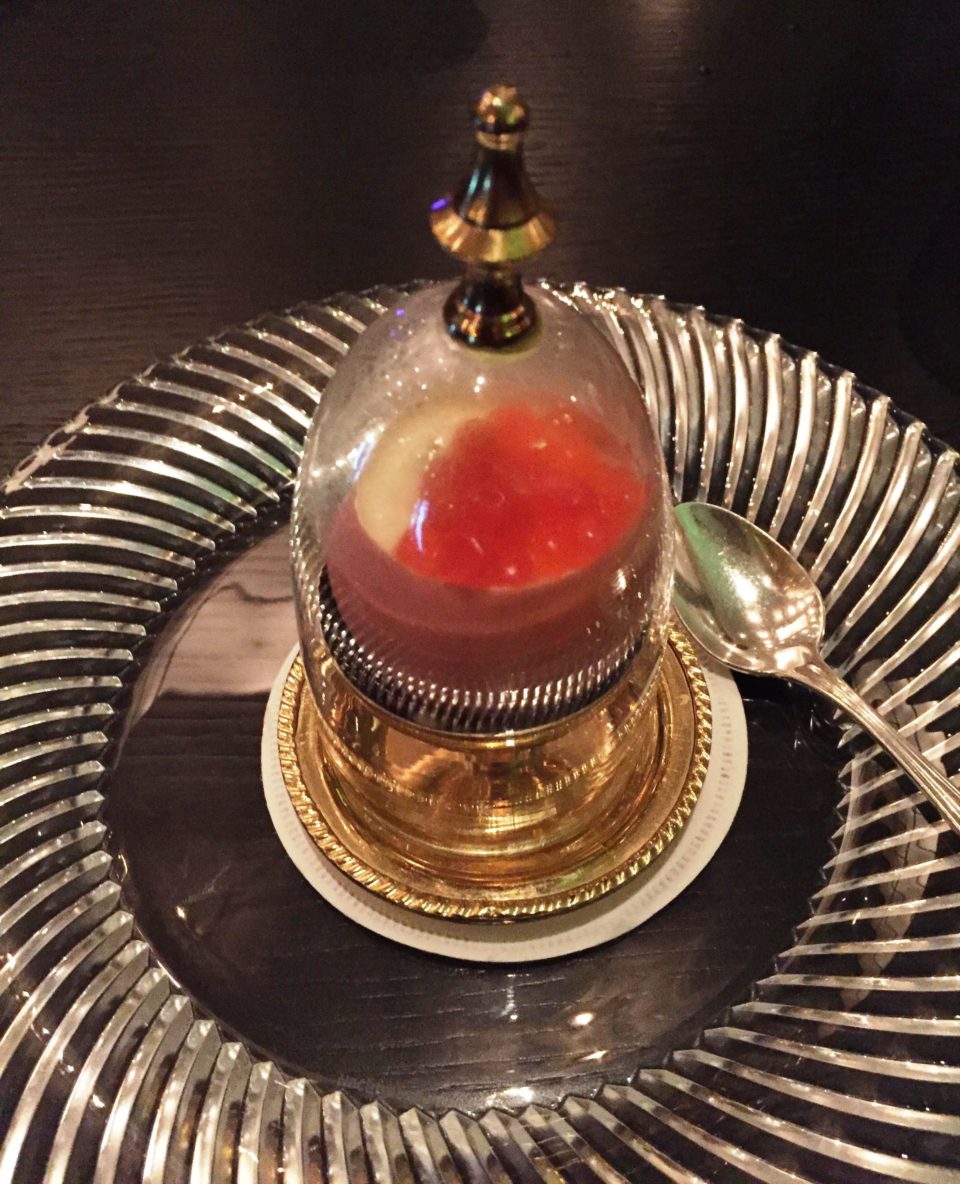 Egg in Egg dish at the Caviar Bar and Restaurant of the Belmond Grand Hotel Europe in St. Petersburg, Russia

Then came the Polugar Classic Rye.  I will never think of “vodka” in the same way again.  This is unlike any vodka I have ever known.  Smooth with a great depth of flavor, Polugar is clearly meant to be sipped and savored, a bit like a fine aged whiskey from Scotland.  So enchanted were we with the Polugar, that we hunted it down in Moscow’s famous Gum department store food gallery and purchased a bottle to take home with us, as our sommelier had informed us that Russia’s Polugar production made by traditional hand distillation processes was so small that the product was not exported. 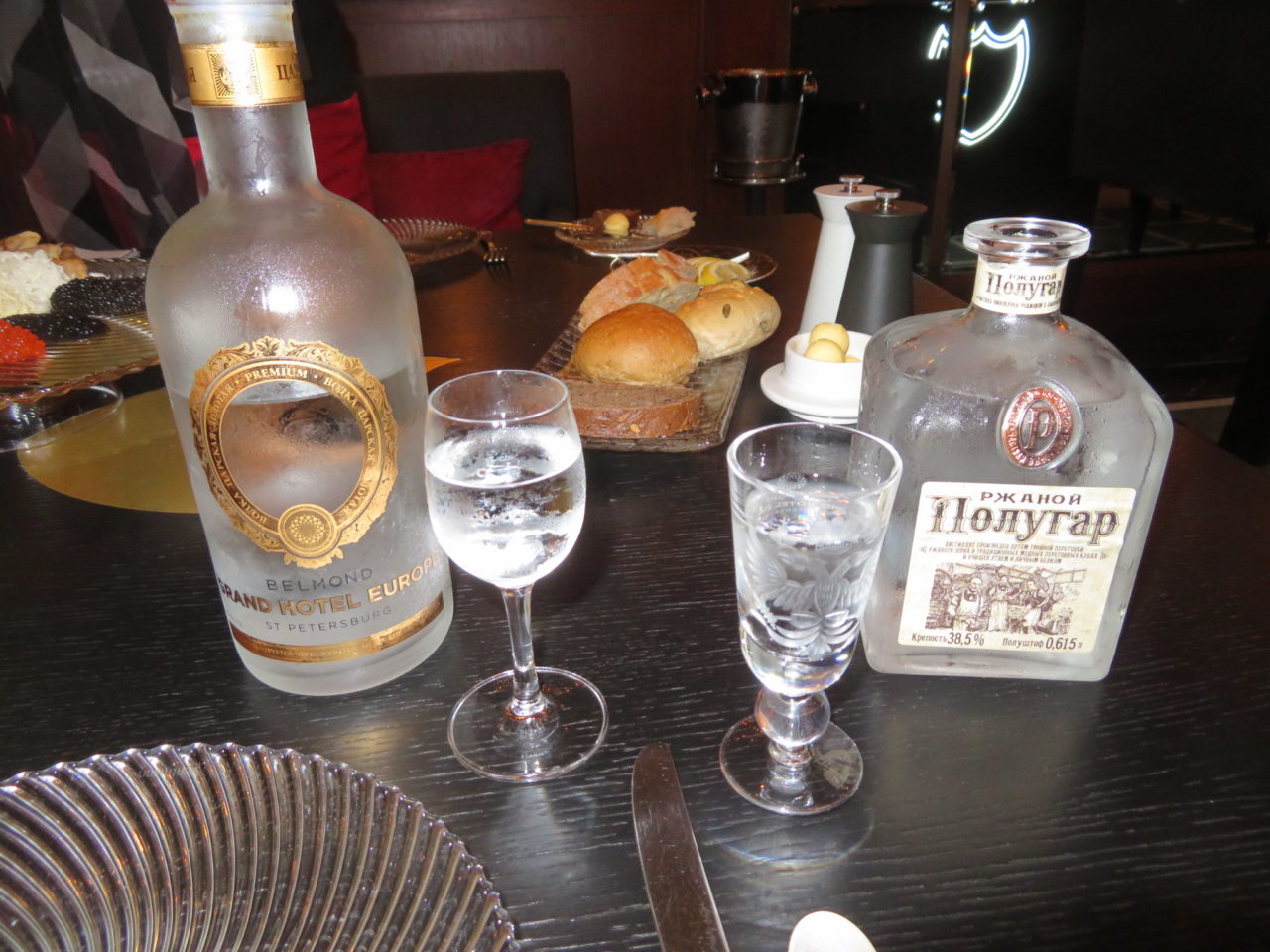 Tsarskaya Gold and Polugar Classic Rye vodkas at the Caviar Bar and Restaurant of the Belmond Grand Hotel Europe in St. Petersburg, Russia

The centerpiece of the caviar tasting was the grand platter of 15 grams each of the five types of caviar we ordered accompanied by the traditional sour cream, chopped egg white, sliced boiled potato, and two types of blini, one of which to my “western” mind essentially is a crêpe … but I know the Russians would never agree (!)    I savored a sip of Polugar before and after experiencing the three black caviars.  The Beluga caviar – the rarest of them all — had a light, silky texture, not salty, with a light essence of hazelnut.  The Oscietra, with its relatively large grains, was saltier and had a stronger, fishier flavor.  And finally, the Sevruga was the most salty and powerful in taste but creamier than the Oscietra.

I now moved onto the Tsarskaya Gold Vodka, part of a collection esteemed by the Romanov dynasty and the aristocracy.  An awesome suggestion by our vodka sommelier, Tsarskaya Gold was created of the finest ingredients for the Tsar’s most festive occasions.  I felt like nobility as I took my first sip.  Aaah … I could not help but note the exceptional smoothness of this vodka as well as the uniquely delightful aroma and flavor which the sommelier explained derived from linden-blossom honey and linden blossom. I was primed to continue the caviar tasting. The Salmon Caviar was slightly sweet, not salty, with large grains, and it paired perfectly with the Tsarskaya – but then most anything would!  Our final caviar, the Pike Caviar, which we were told has recently become popular in Russia, has a mild flavor and is best enjoyed with the combined flavors of the boiled potatoes and sour cream.  Of course, the Tsarskaya elevated the experience to the realm of nobility. 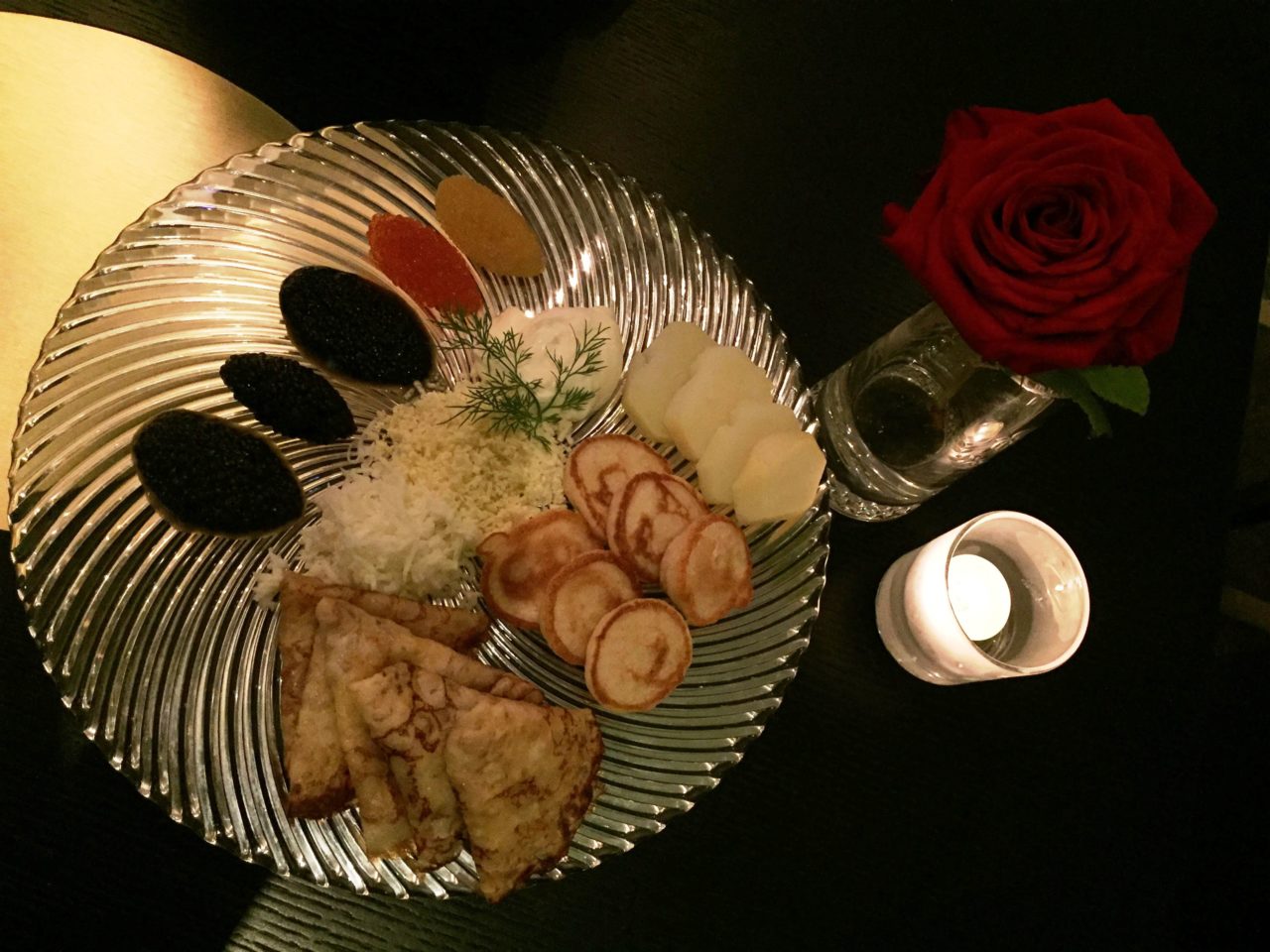 Our Caviar Tasting Platter at the Caviar Bar and Restaurant of the Belmond Grand Hotel Europe in St. Petersburg, Russia

With our tasting complete and every last drop of the food we served consumed, we were offered the Caviar Bar’s tradition of One for the Road and invited to select from one of the large assortment of flavored house-made vodkas.  We chose the Citrus vodka.

The sleek art deco ambiance and Russia’s only full-time professional vodka sommelier brought this extraordinary experience up to a 6* Plus – if such a thing can exist.  Plus, as we sipped our “one for the road” and imagined who else had savored this unforgettable experience, we realized we were in good company.  After all, the multiple award-winning Belmond Grand Hotel Europe has hosted hundreds of VIP guests throughout the years, from Pyotr Tchaikovsky to Lord and Lady Astor to Johann Strauss, President Bill Clinton and Sir Paul McCartney.

Our early evening caviar and vodka tasting at the renowned Caviar Bar and Restaurant whet our appetites for another memorable Russian culinary experience.  Since we were traveling in Russia as guests of Viking River Cruises on the Viking Akun cruise ship from St. Petersburg down the Volga River to Moscow — a cruise I highly recommend (see upcoming post) –,  I turned to the ship’s Concierge, Nadia, for guidance.  I told her that I wanted to surprise my husband, Denis, with an unforgettable birthday lunch in Moscow nearby Red Square, and this time I wanted to try one of the many hot new restaurants opening up to cater to the upscale tastes of the new Russian elite.  The final caveat was that I was specifically interested in the rebirth of “Russian” cuisine.  However, I warned her that the historic grandeur of the Caviar Bar and Restaurant in St. Petersburg would be a hard act to match but, as you will read in my next posting, she made an exquisite selection for my husband’s birthday!  Meanwhile, our sincere thanks to Nadia for finding us such a superb and reliable driver to chauffeur us back to our ship following our caviar and vodka tasting.