We have just flown out of Dulles Airport in Washington DC, and are on our way to Marrakech, Morocco where the daughter of a close Parisian friend is getting married on Saturday October 1st to an attorney, who also hails from Paris France.

It just happens that the groom’s French family owns an estate in Marrakech Morroco (easily accessible via frequent flights from Paris France), and that is where they will host the wedding reception on Saturday evening after the church wedding, as well as the Sunday brunch. The rehearsal dinner on Friday will actually be a cocktail reception at the enchanting Palais Rhoul in Marrakech. We are looking forward to all of these celebrations.

Both our daughters will be with us, since they both know the bride to be and her family very well; in fact, both our daughters  have individually stayed for longs periods at the family’s apartment near the Notre Dame de Paris cathedral in Paris France, and the bride-to-be lived with us for two summers in Wisconsin, working for my wife’s business.

We will naturally fly to Marrakech via Paris France, in order to cross the Atlantic on our favorite airline, the all-business-class Openskies. Openskies has only two routes, New York-Paris, and Washington-Paris. Both my wife and I have come to like the ease and comfort of making the trip to Europe on that airline from Dulles Airport. (2014 Update: sadly Openskies Airlines no longer flies out of Dulles Airport and Washington DC).

Of course, most of my trips have a few hiccups here and there; the first one in this case occurred four days before departure, when the cabin crew of Openskies went on strike! I found out about it on Monday morning when we received an email from the company announcing the work stoppage. Fortunately, not all of the cabin staff joined the strike action; you see, only half the staff is French!  Half the staff is located in Paris, France, the other half in the United States. The company said that the flight out of Dulles Airport would still take place, but with a schedule change which would consolidate both the Washington and the New York flights. We would fly out of Dulles Airport and make an extra stop in New York, pick up the New York passengers there, and then fly on to Paris France, arriving at Orly Sud two hours past the original scheduled arrival time. 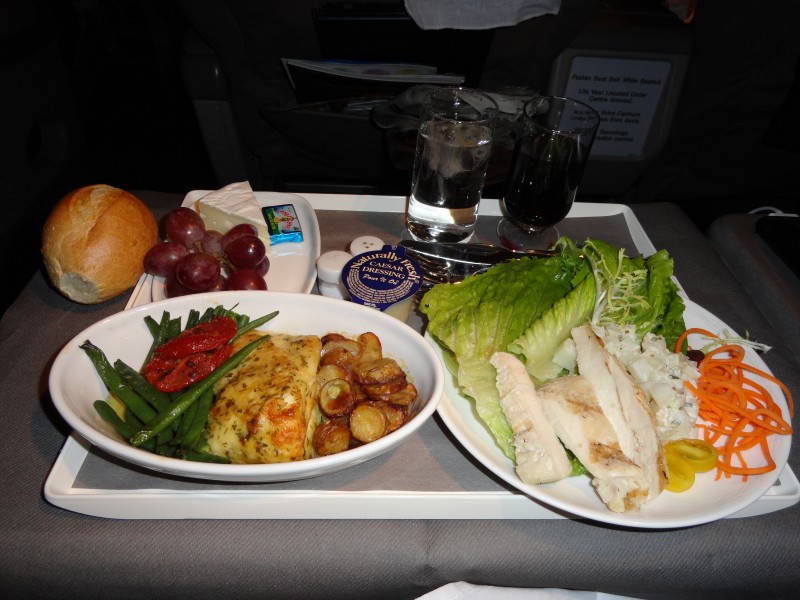 Dulles Airport to Marrakech : the food on OpenSkies Airlines!

That was relatively good news, since our connecting flight from Paris France to Marrakech Morocco was in the afternoon. It looked as if we would have enough time to make it.

There was nothing new or different announced on Tuesday, nor on Wednesday morning, the day of our departure. So we were quite optimistic when we stacked the luggage by the door of our townhouse, waiting for the SUV limo I had ordered for the trip to Dulles airport. You guessed it, I know; yes, the SUV limo did not show up at the appointed time. In fact, after repeated telephone calls and increasing levels of anxiety, a stretch limousine showed up at the door, 40 minutes late. “Beltway traffic”, claimed the driver as an excuse, as if five o’clock traffic on the Beltway in Washington was an unexpected event that he could not possibly have expected!

The other problem was that there was not enough room in this large limousine for all of our luggage; a stretch limo can comfortably sit eight people, but the trunk is very small. That was the reason I had ordered a large SUV, not a stretch limo. We finally solved that problem by sharing our seats with the overflow luggage, and made our way to Dulles Airport.

You would think that this would be the end of our ordeal, wouldn’t you? Our airline on strike, a detour to New York, the ride to the airport 40 minutes late, and the wrong type of vehicle; no, that was not the end of it. At Dulles Airport, after we successfully boarded the flight, and after the plane left the gate area towards the runway, the captain’s voice came on the speaker system; “Dulles Airport has closed all departures towards the west for the time being, because of weather; we are shutting down the engines and will wait here until further notice”.

Sounds familiar? Well, for those who did not hear that story, our last scheduled flight prior this OpenSkies flight was a flight to Quebec City for the wedding of one my brothers, a flight from that same Dulles airport, a flight where the captain made the same exact announcement. The end result then had been that we had sat on that plane for six hours until they had cancelled the flight and returned us to the gate. We had ended up driving rather than flying out of Dulles Airport … all the way to Quebec City.

I am glad to report that the end result was different today; after about half and hour, the captain received clearance to take off and we left for New York, where we stopped for about an hour before our departure for Paris France.

As I am writing this, we are now on the plane, occupying all of row 8 in this 84-passenger 757. One of my daughters is already sleeping after gulping down the delicious Parmesan-crusted cod fish we were served for dinner. And to think they had both Saint Emilion and Gigondas red wine to offer us! I just finished my tea after a satisfying meal (I particularly liked the cheese), and I am now going to take a nap, confident that when I wake up, all of the hiccups of the trip will already be behind us. Right?

Read what happens next in our posting : “Marrakech Morocco via Paris France” !