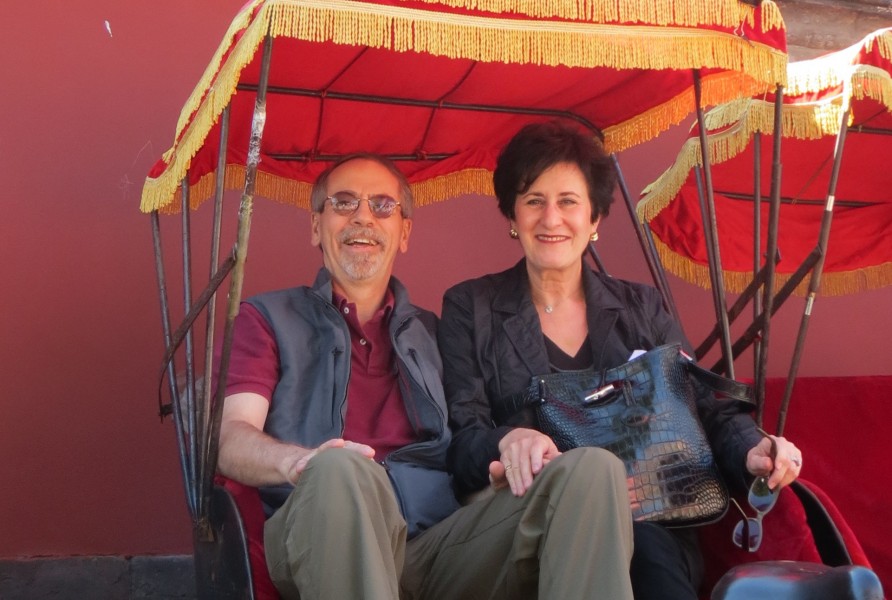 Air Canada to China : touring the hutongs of Beijing !

Lynn and I are on our way to China to celebrate our 40th wedding anniversary! We have just settled into our comfortable seats at the Maple Leaf lounge of the Toronto airport, as we wait to board our flight Air Canada 31 from Toronto to Beijing. How we ended up on this Air Canada flight and this airline is a story in itself, as I usually prefer to fly British Airways or Singapore Airways on long haul flights to Asia.

But earlier this year, a story appeared in the New York Times comparing the air fares offered by airline companies, large online travel services such as Expedia and others, and small specialized travel agencies. The article reported that the small specialized travel agencies can undercut the large companies by significant amounts. Needless to say, I was quickly on the phone with KDCal Travel in California (USChinaTrip.com), which was recommended for travel to China. They offered me a range of options, all of which were less than half the quoted “discounted” prices on the major airline and travel company websites, or about a third of the non-discounted fare which American Express Platinum would have used for its 2-for-1 tickets. In other words, this was a better price than what I had seen anywhere. I checked on Air Canada, the lowest priced option for flights from Washington DC to Beijing China, and discovered that the Air Canada business class seats were fully reclinable to a lie-flat bed, a sine qua non requirement for me on long haul flights. So here we are, booked on Air Canada, about to fly to the North Pole!

I decided to give Air Canada a chance. We would fly Air Canada from Washington DC to Toronto Canada, and then connect to an Air Canada flight from Toronto to Beijing China.

I am not sure whether this trip is starting on the right foot, given the events of this morning. First, the name of our Ethiopian taxi driver to Dulles Airport sounded like Atchoo, and although we had received our flu shot a few days ago and had just taken our Airborne trip pill before leaving the house, I could not help but wonder whether this was not an omen of an impending cold. More ominously, Lynn proceeded to spill tea on all of my computer equipment at the airport, just after I had set up my laptop and iphone at a work area near the gate.
In any case, I am thrilled to be going back to China, where I traveled often and extensively during the 80s and 90s. I happen to have a lot of admiration for Mao’s communist political system which delivered self-respect, freedom and basic rights to a great majority of the Chinese people in a way which the feudal and imperial systems of the past had never even tried to do. I have even more respect for Deng Xiao Ping’s brilliant decision to couple a freer economic system with the communist political system; I credit this masterstroke for the relentless rise of China since then, not only as an economic power, but also as a global power. I have no doubt that, in time, political freedom will grow, but I hope that it continues to be at a pace which protects the gains achieved by the current political structure. I was fortunate enough to travel to China from the early days of its opening (or should I say re-opening) to the West. I remember vividly the darkness of Shanghai at dusk, the absence of any neon lights and the near absence of any other lights, the vast sea of seemingly identical Mao uniforms biking home in silence in almost a regimental manner. I came to know the struggles of the state enterprises trying to adjust to the changing and new economic realities. And I came to love the Chinese people, whose warmth, friendliness and eagerness to improve impressed me to no end.
I even came to learn some Mandarin, enough to hold basic conversations and even negotiations. I have forgotten most of it now, and I will be curious to see how much comes back after a few days on the ground in China  (Zhongguo, or Middle Kingdom in Chinese). I never learnt the Chinese characters, and mastering them seems to me a lifelong endeavor for which I unfortunately do not have enough time left to tackle without putting both my golf and my tennis game in jeopardy.
But I am determined to learn more about Chinese food. I never paid much attention to it during all of my trips to China. A shame really, since according to James Beard, it happens to be the greatest cuisine in the world, better even than French or Italian!
Lynn and I will start our trip in Beijing, which is where we left off on our last trip to China fifteen years ago or so. At that time, we had to cut the trip short and fly back home because Lynn fell ill in Beijing (hence my concern about catching a cold on this trip). We had already done the main touristic sites of the capital, Tiannamen Square, the Forbidden City, the Summer Palace, the Temple of Heaven, the Great Wall, etc… So we will pick up where we left off, starting our trip and Beijing and working our way south towards Hong Kong and Macau.
Beijing, which means capital of the North, is located quite far north in China, just south of Mongolia; it is further north than Pyongyang of North Korea. Its population of more than 20 million people makes it the second largest city in China after Shanghai. Beijing only became Beijing in the fifteenth century or so, during the Ming Dynasty, when the Emperor added the capital of the north (Bei means north, Jing means capital) to his main capital until then, Nanjing, in Jiansu province in the lower part of the Yangtze river just north of Shanghai.

When the Ming emperor moved to Beijing, so did his chefs and the cuisine of the Jiansu region. The Huaiyang cuisine, as it is known, has become the most illustrious of the four grand cuisines of China, the other three being Shandong, Cantonese and Sichuan. Chinese food offered in America tends to be derived from Cantonese and Sichuan food to a large extent. By the way, below the four grand cuisines are a myriad of regional cuisines, generally categorized in eight main cuisine categories and innumerable sub-categories. I will never but touch the surface of what there is to learn about Chinese cuisine; at this point, I can’t even figure out how many different types there are.
The state banquet given to President Bush in 2002 was done with Huaiyang cuisine, as was the first state banquet of the People’s Republic of China in 1949, and the 50th anniversary state banquet in 1999. Shandong cuisine also later became part of Beijing cuisine through the influx of chefs from the Shandong region. So I am looking forward to some dishes from both the Huaiyang and the Shandong cuisines while in Beijing.
There is a general saying in China about the food, and it translates as follows: east is sweet, south is salty, west is sour, north is spicy. Thankfully, Beijing’s cuisine imported the best food from the rest of the country because of the Forbidden City and therefore offers plenty of non-spicy dishes. Beijing cuisine is further subdivided into the imperial cuisine, the aristocrat cuisine, and what I guess is the rest of the people’s cuisine. Being in the dry north of the China, it is more wheat based than in the wet south where rice is king. Lamb and pork seem to predominate. Since we only have three meals in Beijing, excluding breakfast, I have put my sights on three famous dishes from the area; jing jiang rou si (shredded pork), zhajiang mian (noodles with fried meat), and of course Peking kaoya (Peking duck).
Now, time to relax and enjoy a salad lunch in the lounge before our Air Canada flight takes off for Beijing China !

Read what happens next in “Shangri-La Hotels welcome in Beijing China” !