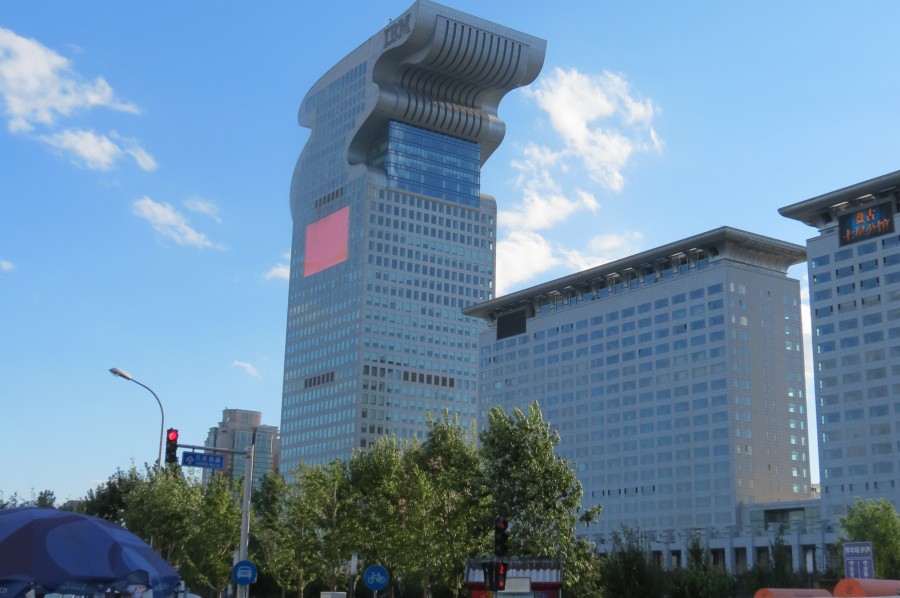 Beijing China : at the Olympic Park

Beijing China … a hutong and the Olympic Park!

Before I start on our day in Beijing China, I need to mention that I did receive my Chinese cell phone and my Chinese mobile hotspot yesterday; they were waiting for me when we arrived at our suite in the Shangri-La Hotel Beijing; I just did not initially notice in all the excitement.

Here’s something Jeff, our driver,  told us about the French language. He said that all Chinese know at least a few French language words. For example, he mentioned “bonjour”, “salut”, and “comment allez-vous?”. He explained that the reason for this widespread knowledge was that there were Chinese words whose pronounciation approximated closely the French words. BonJu in Chinese means Stupid Pig; SaLu in Chinese means foolish donkey; and the last expression means in Cantonese “Tonight we will be fighting tigers”.

Some cultural tidbits which we learnt today. First, was the chinese custom of using two fingers tapped on the table three times to thank someone who pours you some tea. Apparently, this goes back to Shiang Lung, the Qing emperor, who liked to go down in disguise to Suzhou and Hangzhou to find beautiful young women to bring back to Beijing. While the requirement for his officials and servants was to kowtow to the ground and tap their forehead on the ground three times in the presence of the emperor, this was impractical when the emperor tried to stay incognito; and so this was replaced by the finger tapping, and the practice just spread from there. So nowadays, when someone pours you some tea, you need to thank them by looking at them and tapping two fingers three times on the table quickly.

Secondly, when pouring tea at the table, you must make sure to put down the teapot with the spout pointing away from anyone at the table. Apparently, a teapot spout pointing at you means that you are being considered a male prostitute, the hint being the shape of the spout resembling a male organ.

Thirdly, you must never put down your chopsticks vertically into a bowl of rice or leave them in the bowl while you are talking at the table. This is a sign of death, since it is a chinese practice to honor the dead by leaving a bowl of rice with chopsticks in it at an empty chair’s place setting.

Finally, when you pour tea for someone, never fill the cup. It is a bad sign, and means you want the person to go away. Apparently comes from the cultural trait of the Chinese being very indirect about everything and the situation of people overstaying their welcome at a person’s home. Filling their cup was an indirect way to signal them to leave; funny, I never got the hint!

Now back to Beijing China.

This morning, we were scheduled to visit a hutong, which is the name given to the old neighborhoods of Beijing. There used to be 6,000 of them twenty years ago; there are now about 1,800 left, the rest being razed to make way for high rise and other commercial projects. The word itself means water well in Mongolian. We are going to a hutong near the Bell Tower and the Drum Tower; chinese tradition was to ring the bell in the morning, beat the drum in the evening. We took a rickshaw to explore the small alleys of the hutong.

Of notice was the fact that there was a public toilet and bath area literally every 100 meters, a contribution of the communist government to reduce the spread of disease in the hutongs. The public toilets and baths have become very important to the social life of the neighborhood. Jeff explained that the men go there in the morning, squat over the chinese toilet (not much more than a hole in the ground, and without any wall or separation between each toilet) reading the morning newspaper and chatting with the other men around them doing the same thing. The men then tear up the newspaper to use as toilet paper, and finally light up a cigarette and chat some more, in part to chase away the odor.

You could tell what type of important person lived at a particular house in a hutong by the type of statues on each side of the front  door, and by the number of marks above the door.  A statue with a round base (shape of a drum) denoted a military official; one with a square base (shape of a book) meant an administrative official. Four marks above the door meant a really high official.

We visited a local vegetable market and then went inside one of the houses in the hutong. While these houses were initially occupied by one family, the dwelling now houses six or seven families. We visited one family and had the opportunity to talk with the Beijing housewife who lived in the tiny three-room apartment with her husband and sixteen year old s on. On the wall was a calligraphy document which supposedly was written by her husband’s father and details all the rules which a woman must follow. Her favorite food was jiaoze (dumplings), I remember her saying.

For lunch, we went to a restaurant serving typical Beijng food, Yi Wan Ju (means one bowl)  on Pufang Lu, where I learnt not only how to scream at waiters like everyone else, but also how to object loudly to the bill when it came (less than $35 for the four of us) for being too much money.  Apparently, I am fast becoming a Beijinger! We had a banquet of typical Beijing food, starting with zahjiang mian (old Beijing noodles with fried bean sauce), but also including ma doufu (spicy bean curd), Tie Ma Tuer (cabbage with mustard), Tsung Tao Yang Jio (shallots fried with lamb), Tsiang Goi You Tsai (bok choi with mushrooms), and Tswan Jiao Jer (sour date juice). Don’t believe any of my spellings of those chinese names.

In the afternoon, we visited the silk market (tourist filled building with 1,600 shops selling knock offs and other Chinese products), the antiques market on Panjiayuan street (hundreds of shops selling furniture, paintings, ceramics, pearls, etc…), two porcelain stores (we were looking for a large wall porcelain plate from Jingdezhen, the capital of porcelain in China and therefore the world), and a large silk factory store (forgettable). We finished the day at the Olympic Park which seems to be extremely popular with Chinese tourists,  and visited the Water Cube.

We then tried to get to our dinner restaurant, Bianyifang on Bei Sanhuan Zhenglu in the Xicheng District. We could see the restaurant only a few hundred feet away, but in order to get there, we had to exit one highway and enter another, then find a way to get into the other direction of that highway, etc… Barriers and omnipresent police cameras make u-turns impossible, and rush hour traffic (at all times of the day) complicate the rest of the effort to no end. The whole thing took us an hour.

Binayifang is the oldest restaurant in Beijing for Peking duck, dating back to the 1400s, although it has now evolved into a chain of 8 to 10 restaurants in and around Beijing. We thoroughly enjoyed our meal there, where we also had the most appetizing Beijing version of spring rolls.

All in all, a good day in Beijing China!

Read what happens next at “China Eastern Airlines to Xi’An!”