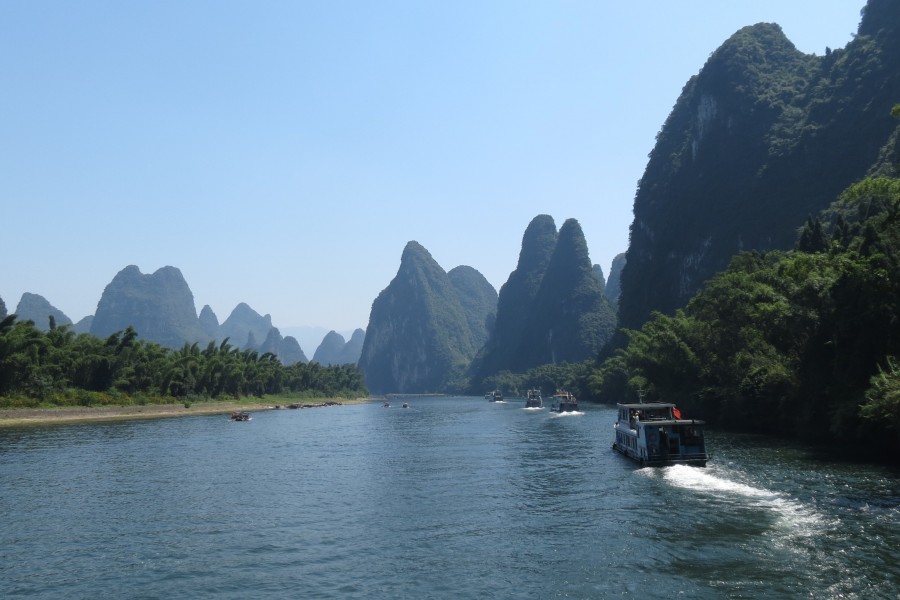 Yangshuo and the Li River cruise

Yangshuo and the Li River cruise.

We are currently on board Hong Kong Airlines flight 122 from Guilin to Hong Kong, and therefore we have said good bye to mainland China so to speak. What a surprise when our driver pulled up in front of the terminal at Guilin aiport. Two beautiful smiling young women, meticulously attired in red and grey uniforms, were waiting for us outside, literally in the street. Their task apparently was to escort us though passport control, customs, check in and security to the first class lounge located next to the departure gate.

I hope I find the strength to tell you more about it (it is now already 11pm and we have arrived in Hong Kong), but let me start by staying that the four-hour Li river cruise was fabulous from start to finish, the lunch at Yangshuo was memorable, and our arrival at the Kowloon Shangri-La hotel no less spectacular. What a day!

The day started with the phenomenal view from our window at the Shangri-La Guilin Hotel when we woke up at 6am this morning. The view of the karsts, the Li river, the morning pedestrian traffic, the manicured gardens and pools of the hotel, all combined to create a breathtaking picture from our wide hotel room window, which we were able to experience yet again when we sat down for breakfast at the Horizon Club. Lynn again had a Chinese breakfast, including shao mai dumplings.

We then left for the 45 minute ride to one of several piers in Guilin from which the Li river cruise boats depart for the trip to Yangshuo. Our guide told us that 5,000 people a day take the cruise down the river to Yangshuo, most of them leaving all at the same time at 9:30 in the morning, packed 100 to a boat. This is an endless procession of three decker boats leaving the docks in quick succession. Those large boats are government owned. The locals can also sell rides down the river in their smaller boats, but they are allowed only to go down to the next village.  The purpose, as the boat’s brochure describes it, is to admire the “grotesque peaks” (sic) of the karsts along the river.

Although we had assigned seats inside on deck two of our boat, Lynn and I remained standing on the top deck for most of the trip, in order to take in the spectacular views which we had for at least three of the four hour downstream trip. I managed to take more than 300 pictures of this magnificent stretch of water. One area, near the town of XingPing, is the landscape used on the 20 yuan bill of the chinese currency, and it is probably the most spectacular scenery you can imagine. 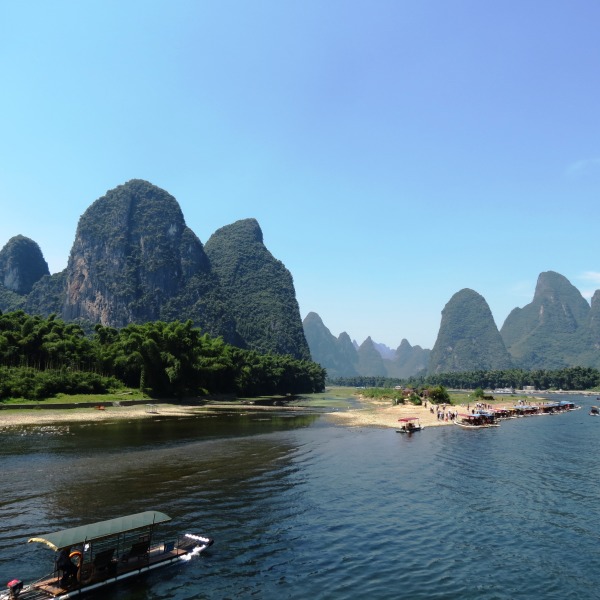 Yangshuo and the Li River cruise : karsts as seen on China 20-yuan bill!

There is a lot of what our guide called phoenix tail bamboo (thick bamboo about four to six inches in diameter) along the river, which used to become the material for the fishermen’s rafts; but now the government has banned the practice to save the natural environment along the river and the rafts are made of bamboo-looking plastic.

We met some interesting people on the boat. Our table had two italian doctors living and working in Paris, two newlyweds from Madrid, and two men from Iran.

After arrival in the charming and touristy village of Yangshuo, we had a great lunch consisting of the famous Pijao Yu (Yangshuo beerfish), as well as Tian Luo Nian (stuffed snails) and boiled Chinese lettuce. We then left Yangshuo by car for the drive back to Guilin Airport.

After we arrived at the Kowloon Shangri-La Hotel in Hong Kong, where they said they found records indicating that my last stay there was in 1998, Lynn and I received not only the usual welcoming tea (the best so far according to Lynn), vase of flowers, and platter of fruit, but also the best box of chocolates we have received on this trip (and there has been quite a few), plus a bottle of champagne, plus an additional bouquet of roses.

Hong Kong, seven million people, where our guide says that there are no houses, only skyscrapers. The tallest, built in 2006, has 118 floors, including a Ritz Carlton hotel whose lobby, on the 101st floor, is the tallest in the world.

I have so much more to say, but I have to stop. The floor to ceiling view of Hong Kong Island from our room window is too awesome, and I am too tired; I’ll just sit in front of the window and admire Hong Kong. I just love it!

Read more at “China – Reflections on our last trip to China“.

« Guilin China : the postcard city !
China – Reflections on our last trip to China ! »