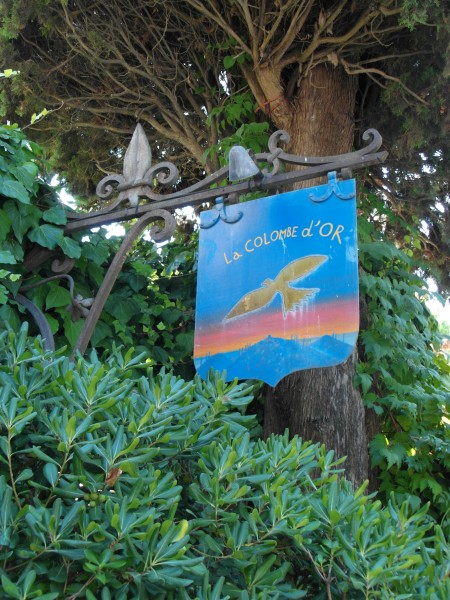 Read our previous posting at “Cocteau : L”Oisivete me fatigue (Idleness tires me) !”

I have been compelled to make another lunch reservation, this time at La Colombe d’Or in Saint Paul de Vence (I wonder if Anne-Marie has been there yet). This is not because the only thing I do on a vacation is eat lunch; it is because (1) the only way to see the amazing artwork owned and displayed by this hotel/restaurant is to either stay or eat there, and (2) there is a fascinating history associated with this place.

The founder of this hotel/restaurant in 1920 was a Paul Roux, who happened to like art, and his café in Saint Paul de Vence quickly became a hangout for artists after Modigliani, Bonnard and Signac started meeting there. Picasso, Matisse, Miro, Leger, Braque, Chagall, Calder, Buffet, Dufy, Utrillo, etc… are all reputed to have been regulars, who sometimes paid for their meals with artwork, paintings, sculptures and/or drawings, thus creating a priceless legacy. The reputation of La Colombe d’Or only served to attract other artists, movie stars and other famous people to the place. Hemingway and later John Houston were regulars at the bar. The signature book of La Colombe d’Or is filled with drawings, artwork and signatures from famous people who continue to make a pilgrimage to La Colombe d’Or. Joie de vivre!

Two historical incidents seem to be frequently mentioned. The first relate to a jealous row between F Scott and Zelda Fitzgerald over the Russian ballerina Isadora Duncan. Gerald and Sara Murphy were having dinner at La Colombe d’Or with the Fitzgeralds when F Scott Fitzgerald spotted the beautiful Isadora Duncan at a nearby table. Gerald Murphy got up to make the introductions and before you know it, F Scott Fitzgerald was at Isadora’s feet (the stories seem to vary as to whether he knelt down or sat down at her feet). Zelda, furious at all this, got up onto their dinner table, which was next to a ten foot ravine, and simply threw herself off the table into the ravine, resulting in bleeding and bruises and probably more.

Like a magnet the Art Hotel attracted the greatest film directors, actors, singers and writers of the day: Renoir, Prevert, Chaplin, Truffaut, Signoret, Piaf, Montand and Deitrich. It became one the most famous celebrity salons in the South of France. The second incident relate to Yves Montand who apparently met Simone Signoret at La Colombe d’Or, which explains why they later married there in Saint Paul de Vence. Today, nothing has changed. The likes of Michael Caine, Bono, Roger Moore, Richard Attenborough, Elton John, Madonna, etc…  can be sighted lunching at a table on the terrace.

As for the food, I am told not to miss the famous hors-d’oeuvres (appetizers). I know that F Scott Fitzgerald did not go to La Colombe d’Or for the food; he is said no to have cared much for French or Provencal food and simply asked for a club sandwich in every restaurant. Joie de vivre meets Art de vivre!

I just found out that there is a guide to the restaurants of Nice as well the rest of the French Riviera. It is called Guide Gantie and is available at guidegantie.com. A welcome addition to Michelin and Trip Advisor. I also found out that there’s a Musee Auguste Escoffier in Villeneuve Loubet, not far from the Musee Renoir in Cagnes. The king of chefs and the chef to kings, as he is referred to, may deserve a visit; something else to investigate. The list of places to visit in the Nice area is getting too long; I am going to have to prioritize and cut. One outing that will not be cut is the bouillabaisse at La Mere Germaine on the port in Villefranche, one of the few places on the French Riviera which serves the “real” bouillabaisse, prepared the old fashioned way (check the recipe on the website, just reading it is mouth watering).