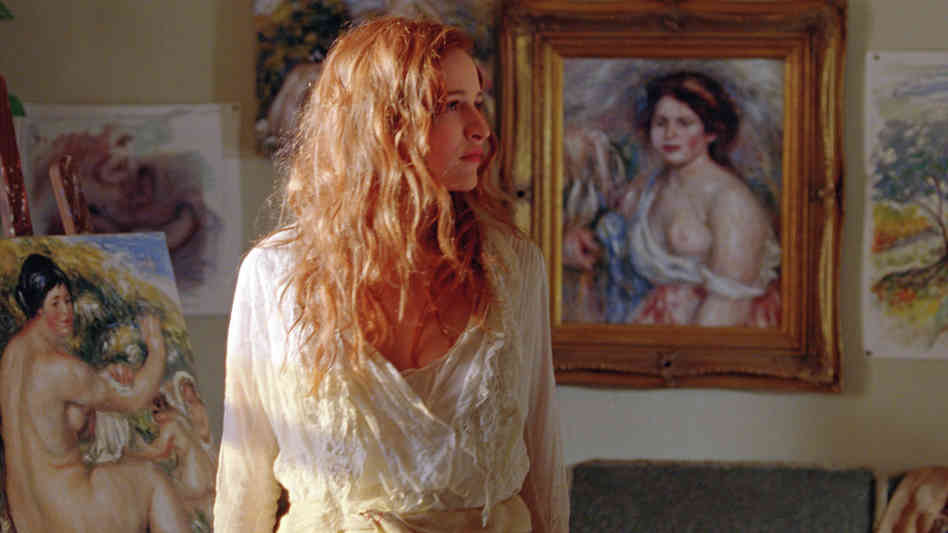 Nizza or Nice? Christa Theret as Andree Heuschling in the movie “Renoir”

Read our previous posting “Public Transport in France : a marvel“

I should be ready soon to make a list of our touring priorities for our upcoming trip to Nizza ( Nice France ) and the Cote d’Azur (French Riviera), and determine what will need to be cut. Meanwhile, I keep finding tidbits of interesting information of relevance to our trip. Here are a few examples of the things I take note of:

1. Nancy a le torticollis (Nancy has a stiff neck): I have been looking forward to having a bouillabaisse at La Mere Germaine on the port of Villefranche sur Mer. In looking up the story of La Mere Germaine, I was and am intrigued by her connection with the officers and sailors of the US Sixth Fleet, who were regular visitors and who put up a plaque in her honor outside the restaurant. A book has been written about her as the “mother of the sixth fleet”! Why would the sixth fleet, which is based in Napoli, visit Villefranche sur Mer? Well, it turns out that the bay of Villefranche is a very deep water bay which can accommodate large ships such as the warships of the US Navy; this also explains why nowadays large cruise ships tend to throw anchor in the bay of Villefranche as one of their stops on the Mediterranean. But there is more.
Did you know that a couple of months after D-Day, on August 15th 1944, there was another Allied Forces landing, this time on the beaches of the French Riviera? I wonder, how did the beautiful topless bathers on the beaches of the Riviera react to the sight of an army of soldiers coming out of the water? It was August after all. I felt the need to find out more about that landing.

The operation had been named Operation Dragoon by Churchill, who was opposed to it, saying that he had been “dragooned”, forced into it. Churchill had wanted a landing further east in Italy in order to head straight north and get to Berlin before the Soviets did. However, a weak Eisenhower was unable to resist the fit thrown by General de Gaulle, who threatened to pull out the French Forces (made out largely of Pieds-Noirs from North Africa) if the landing did not occur in France so as to head north and liberate France and Paris first. I just can’t imagine how the idea of a small number of North African French forces could prove so threatening to Eisenhower, until I realize that the decision might have had more to do with the attraction of the beautiful topless beaches of the French Riviera than to global military considerations. Naturally, General de Gaulle would not think of going anywhere else on a nice warm summer day; the mere thought of landing as a conqueror on a beach full of gorgeous women has got to be irresistible to generals and sailors alike. Think about it; the end of the war and the whole cold war period might have been totally different if Eisenhower had listened to Churchill and landed in say Serbia.

On August 14th 1944, the BBC broadcast the code signal “Nancy a le torticollis” (Nancy has a stiff neck) to tell the resistance forces of the impending invasion the next day. The invasion force, largely American forces but with some British and about 10% made up of French troops, took about two weeks to gain full control of the French Riviera. Nice, which as you may recall from previous postings had been called Nizza and been part of Italy for a long time, had been handed back to Italy by the Germans. Nizza fell to the Allied troops on August 28th 1944. That is why we now say “salade nicoise” and not ” insalata di Nizza “! Perhaps that also explains why we need to put the word French in front of the italian word Riviera, so that noone is tempted to think that Nizza is still part of Italy!

2. Andree Heuschling: Did you have a chance to see the movie “Renoir“, which was released in the USA last March? It relates to the last few years of Pierre-Auguste Renoir‘s life at his farm “Les Collettes”, very near Nizza in Cagnes sur Mer. The farm has since become the Musee Renoir and has recently reopened after a two-year renovation period. Central to the movie is the story of Andree Heuschling, usually called DeeDee, who became a model for Renoir in 1915 at the age of fifteen. Her beauty and charm motivated Renoir to keep painting, which he did until his death in 1919. DeeDee later married Renoir’s son, Jean Renoir, who apparently was quite indecisive but became a filmmaker at her urging. He starred DeeDee in fifteen movies, mostly silent movies, under the screenname Catherine Hessling. I look forward to visiting the Musee Renoir in a couple of weeks and admiring the (nude?)  paintings of Andree Heuschling by Pierre Auguste Renoir.

3. Auto Bleue: Yesterday, I wrote my blog about French public transport on the French Riviera. Since then, I have discovered that it gets even better than I thought. Since 2011, they have a system of electric car sharing rental in operation, called Auto Bleue, with more than 50 stations in and around Nizza. There is a station just a couple of hundred feet from our rental apartment. Similar to the bike rental services one sees in all large cities nowadays, one just reserves a car by internet or by phone and simply picks it up at one of the stations and returns it to the station when finished. The rates are quite reasonable and all inclusive. The cars are Peugeot 4-seater electric cars with a 100km range, so good enough for anywhere we want to go on the French Riviera (Cannes for example, which is our furthest point west, is only about 30 km west of Nice). I hope I get a chance to try this out, and if it works out, that could be our way to get to the Musee Escoffier and the Musee Renoir, or we could simply try it out on the Grande Corniche on the way to Monaco (after I check the brakes; I don’t want to have the same fate as Princess Grace).

4. SNCF by phone: did you know that the French railway company, SNCF, operates an English language phone service whereby you can get information as well as reserve and pay for your train ride by phone? It is available from 7am to 10pm every day.

5. Brigitte Bardot: Did you know that Brigitte Bardot, who lives in St-Tropez as you may already be aware of,  has been taken to court and fined five times for writing that the Muslims are invading France and ruining the French way of life?

6. Le Festin des Baguettes (The Feast of the Baguettes): While checking on events happening during our stay on the Riviera, I came across the Festins des Baguettes in Peille, held on the first sunday of September. The article mentioned a Bal des Baguettes and women hitting their chosen men with baguettes. I was wondering if I had found the origin of the omnipresent French baguette bread, although I was puzzled by the idea of a beautiful woman hitting me with a baguette. It actually sounds like a lot of fun, doesn’t it? Well, in reality, we are talking here about a different type of baguette. Baguette in the French language can also mean a wand. Ever since the fourteenth century, when a young shepherd used a wand to find water for a very dry town, Peille, a town in the hills not far from Nice, has been celebrating the Festin des Baguettes (Feast of the Baguettes) every year on the first sunday in september. Oh well, strike that one out!