Read our previous posting : “The autonomous polity of Mount Athos”

A stay at the Villa Galini Hotel in the Halkidiki region of northern Greece probably represents one of the very few opportunities you will ever have to live the life of a Greek shipping magnate. And that is because, before being turned into a hotel, Villa Galini was the residence of Yiannis Carras, a Greek shipping tycoon who lived there until his death in 1989.

In 1960, while sailing in the Halkidiki region of northern Greece aboard his yacht Carita, Yiannis Carras had fallen in love with the area and ended up buying a huge tract of land on the Sithonia peninsula, just south of the coastal town of Neos Marmaras. He named his new property Porto Carras. 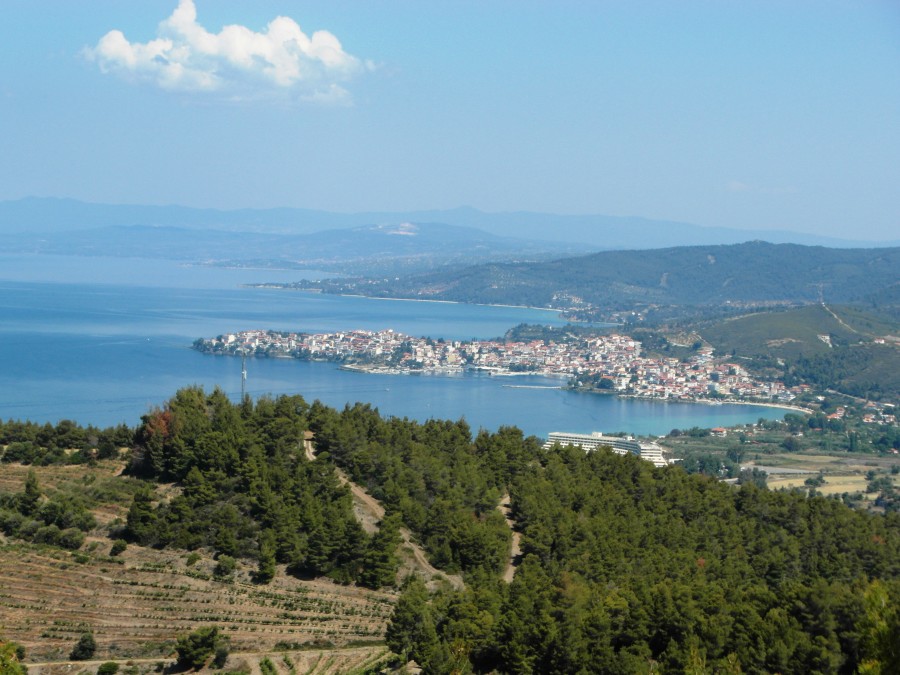 He also decided to build himself a new home on the high rocky cliff of Mount Meliton, at the center of his immense new property, on a spot offering eye-popping panoramic views of the coastline and the gulf of Toroneos. When it was finished at the end of the 70s, Villa Galini was celebrated in several magazines as one of the most beautiful buildings in Greece.

The views are obviously the primary assets of Villa Galini, with windows and balconies spread throughout the three sides of the house protruding from the cliff. But the views are nowhere as phenomenal as outside on the immense terrace of the pool area. The blues of the pool, the sea and the sky seem to blend themselves into a feeling of infinity and bliss.

View of Turtle Island from the pool terrace at Villa Galini

There are large living areas both outside around a large central courtyard as well as inside in beautifully decorated rooms along the sea side of the mansion.

Some simply left an autographed picture and you will see many of them throughout the house. My favorite is a picture of Yiannis Carras with Melina Mercouri.

But others left their imprint in other ways. One of the guest rooms has a Salvador Dali bathroom, and there are a couple of impressive Dali sculptures in the courtyard.

Salvador Dali sculpture in the central courtyard of Villa Galani

There is a magnificent colorful alcove room on the main floor by Yves Saint Laurent. And the music suite of the main living room features the piano of the famous Greek classical pianist, Gina Bachauer.

Villa Galini has been transformed into a hotel which should appeal to all those interested in a totally unique, spectacular and memorable experience. Wedding planners as well as corporate executives in search of a first class locale for meetings, conferences or retreats should give Villa Galini serious consideration. Porto Carras includes three helipads and one the best private marinas in Greece for those who travel in style!

However, should you feel that Villa Galini Hotel is beyond the reach of your wallet, or you simply wish to stay further down the slopes of Mount Meliton, have no fear. Porto Carras is one of the most outstanding resorts in all of Greece. Within the boundaries of Porto Carras lie, in addition to Villa Galini, two five-star hotels, a luxurious casino, two thalassotherapy and spa centers, an olive grove of 45,000 trees and one of the best vineyards in Greece.

But would it not be fun to live the life of a Greek shipping magnate at Villa Galini, if only for a few days?

« The autonomous polity of Mount Athos!
Afghanistan, the graveyard of Empires! »