Ago Glain with Pili Pili.

BEST of Benin food : Ago glain with pili pili ! A mouthful just to pronounce it!

Ago glain, a shellfish, tomato and onion stew, and the local red pepper hot sauce, pili pili, make for a savoury dish served on special occasions in Benin. 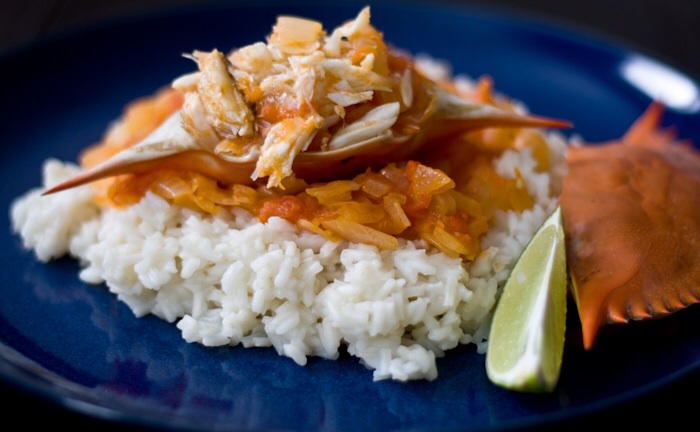 Ago Glain with Pili Pili

Here’s a great recipe for Ago Glain with pili pili from cdkitchen.com :

Directions:
Wash the crabs and place them live in a large stockpot full of boiling water to which the vinegar, salt, and pepper have been added. Cook the crabs for 10 minutes, skimming off any residue that rises to the top of the water. Then add the whole tomatoes, the bay leaf, parsley, and one of the onions with the cloves stuck in it. Remove the tomatoes after 5 minutes and continue to cook the rest of the ingredients for an additional 5 minutes or until the crabs are done. Remove the crabs. (You may wish to reserve the water in which the crabs have been cooked to use for cooking the white rice that traditionally accompanies this dish.) Remove the crabmeat from the body and the claws, trying to maintain the shells for serving. Place the crabmeat in the lime juice.

Meanwhile, heat the oil in a saucepan. Mince the two remaining onions and brown them lightly in the oil. Add the cooked tomatoes and cook the mixture until it is reduced to a pastelike consistency. When the mixture is reduced, add the Pili Pili, stir to ensure that the flavors are mixed, verify flavoring, and serve hot. The crabs are traditionally served in their own shells or in ceramic shells, on a bed of rice covered with the sauce. Alternately, the sauce may be served separately in a sauceboat.

Read our related posting: “Benin, cradle of the voodoo religion!”

Read our next posting: “Best of Bhutan food: Ema Datshi, the famous and fiery national dish of Bhutan!”

« Brunei, the fifth richest country in the world!
BEST of Bhutan food : Ema Datshi, the famous and fiery national dish of Bhutan! »