The term “maboke” , which is the plural of “liboke”, refers to the mode of cooking, with the food inside large banana leaves closed at the top, with the shape resembling that of  an old purse (hence the french term “aumoniere”).

The French word “capitaine” in the recipe name implies that it is a fish recipe. Since the Central African Republic is a landlocked country in the middle of Africa, we are talking about river fish, probably from the Oubangui river which flows by the capital city of Bangui. 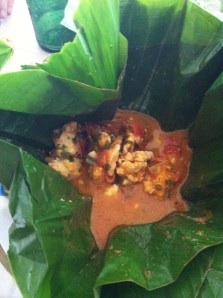 The recipe below uses Nile Perch and comes from www.cellnet.org.uk:

If using banana leaves, then arrange these in pairs, arranged in a cross pattern. Alternatively use 45cm squares of kitchen foil.

Finely chop the garlic, onion, parsley and chilli then mix together.

Wash, de-seed and slice the tomatoes into thin slivers. Place a tablespoon of the onion mix in the centre of each banana leaf (or each square of kitchen foil). Sit a fillet of Nile perch on top, then add a spoonful of the onion mix on top. Sit the tomato slivers on top of everything.

Close the parcels, tying securely with string then sit a rack in a roasting tin. Fill the roasting tin with boiling water up to the rack, then sit the mabokés on top.

Transfer to an oven pre-heated to 200°C and bake for about 25 minutes, or until the fish is cooked and flakes easily with a fork.

Serve hot, direct from the cooking parcel and accompanied by fried plantains and plain, boiled, rice.