Langouste a la Vanille, or Lobster in Vanilla sauce, is the national dish of the Comoros Islands in Southern Africa. The dish comes from the adaptation of French cooking to the local produce of the Comoros islands. The meat from Southern Africa lobster is rich, tender and a true delicacy. 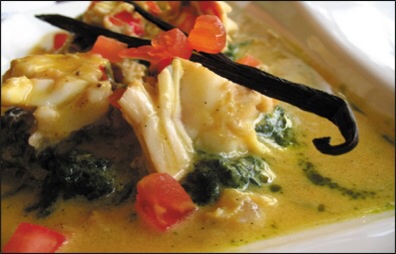 The following recipe for Langouste a la Vanille comes from Weblogtheworld.com:

Preparation:
1. Place a roasting pan large enough to hold the lobsters in the oven and preheat to 450 degrees. With the tip of a sharp knife pierce lobsters between the eyes to sever the spinal cord. Crack claws using the blunt edge of a cleaver or a hammer. Place lobsters in the hot roasting pan, drizzle with oil and roast until red, about 15 minutes. Remove from oven, and set aside.
2. Melt 2 teaspoons of butter in a small sauce pan, add the shallots and sauté over low heat until soft and translucent, about 3 minutes. Add wine and vinegar, raise heat and cook at a moderate boil until the liquid is reduced to 1 tablespoon, about 5 minutes. Remove the pan from the heat, and whisk in 6 tablespoons of butter, about 1 tablespoon at a time until all is incorporated. Scrape the seeds from the vanilla bean into the sauce, stir to combine and strain out the shallots through a chinois (strainer) into a clean saucepan. Use a spoon or wooden spoon to gently mash the shallots in the chinois to squeeze out all of the sauce. Season with 1/4 teaspoon salt and pepper, and set aside.
3. When the lobsters are cool enough to handle, remove the meat from the claws. Detach the tails, and discard the heads. With a pair of scissors, cut the shell on the underside of each tail in half lengthwise, remove the meat and cut into 1/4-inch-thick slices. Loosely cover the meat with aluminum foil, and keep warm.
4. Melt 1 tablespoon of butter in a large pot, and add spinach and Vidalia’s. Stir until greens have melted down, and continue to cook, stirring occasionally, until the greens become tender, about 5 minutes. Season them with 1/4 teaspoon of salt and pepper.
5. To serve, reheat the sauce over low heat until warm, whisking constantly. Place a bed of greens on each plate, arrange the lobster meat on top and spoon the sauce over the lobster. Top with clover Sprouts. Serve immediately.