For the Ivoirian dish of kedjenou, chicken and vegetables are slow-cooked in a well-sealed pot with little or no added liquid. The resulting dish has a full-flavored concentration of the chicken’s essence and meltingly tender meat. 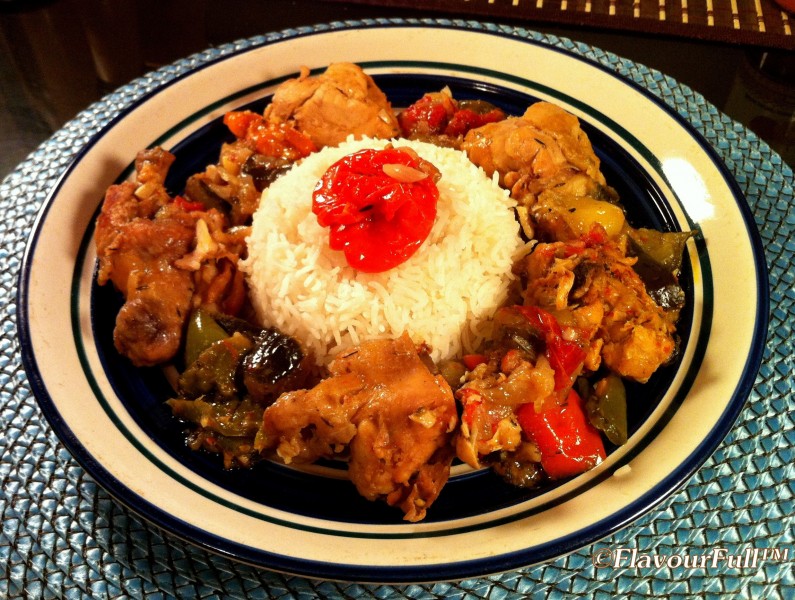 Preparation:
Preheat oven to 325°F. Add all the ingredients to a large oven-proof pot with a tight-fitting lid. Cover the pot with one or two layers of aluminum foil and place the lid on top of the foil.
Place the pot in the oven and bake for 2 to 3 hours. Remove the pot from the oven occasionally and shake it to keep the chicken from sticking.
Remove the pot from the oven. Let it rest for about 10 minutes. Serve hot with couscous, attiéké (see note), rice or boiled yams.
Kedjenou Variations
Kedjenou can also be cooked on the stovetop. Bring the ingredients to a simmer over medium heat. Then reduce heat to low and simmer for 1 1/2 to 2 hours. You will need to shake it a little more often than the oven-baked version to keep it from sticking.
Lower-fat Version: Remove the skin from the chicken and add 2 or 3 tablespoons of peanut oil.
Some (mostly French) recipes call for first browning the chicken in peanut oil and sauteing the onions. While this adds flavor to the dish, it is not strictly authentic.
You can add 1/2 cup water or chicken stock to the pot at the beginning if it looks way too dry. The tomatoes should give off enough liquid though that this shouldn’t be necessary.

Notes
Attiéké is a couscous-like side dish made from grated and fermented cassava. Instant boxed versions can be found in many Middle Eastern or African ethnic markets.

« Djibouti, at the mouth of the Red Sea, with the saltiest water on earth Lake Assal!
Dominica, the nature island of the Caribbean! A real gem! »