The King David Hotel in Jerusalem, the most famous hotel in Israel in the most historic city in the world! 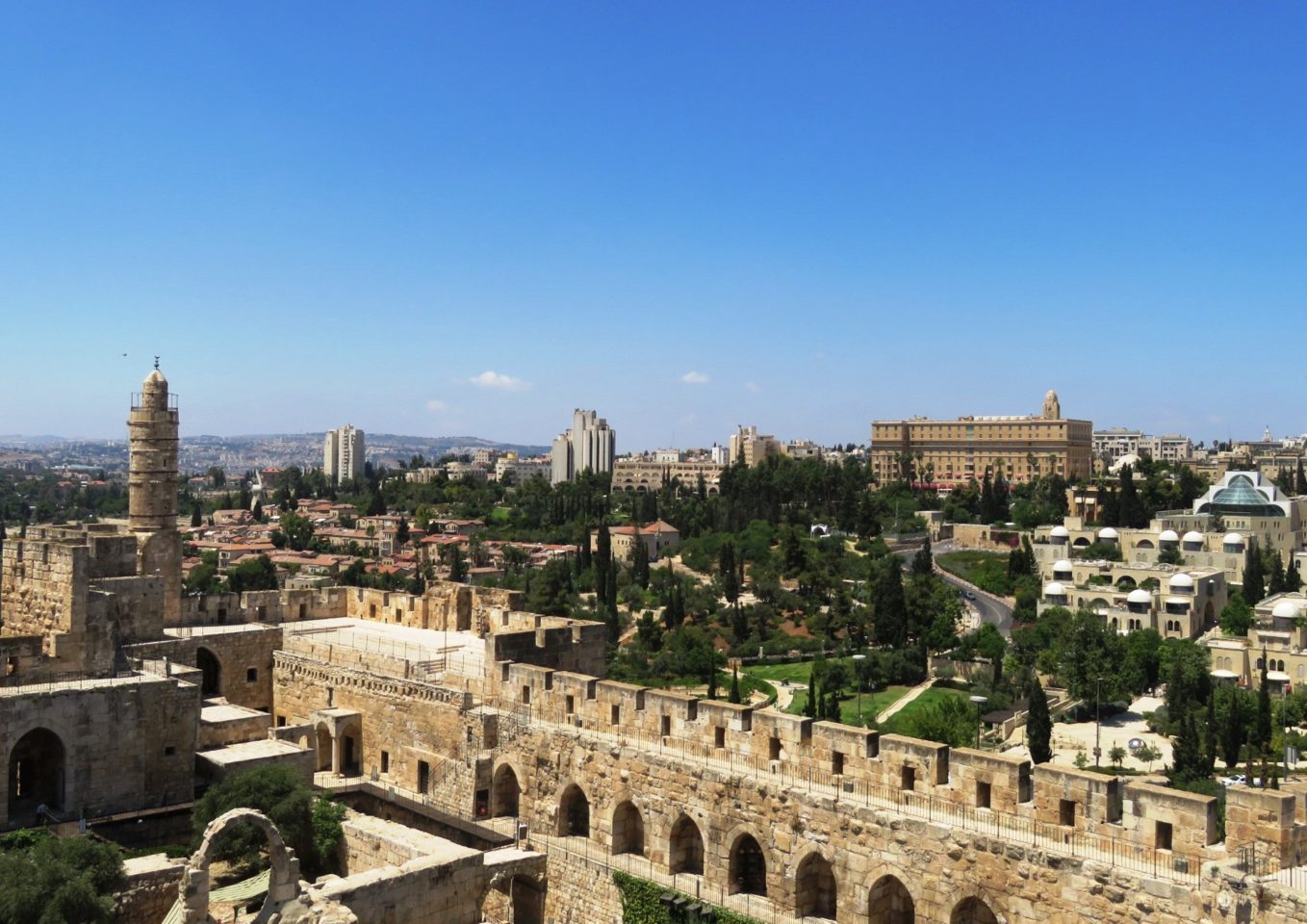 Walking into the historic King David Hotel overlooking the Old City of Jerusalem is like taking a giant step back into history. 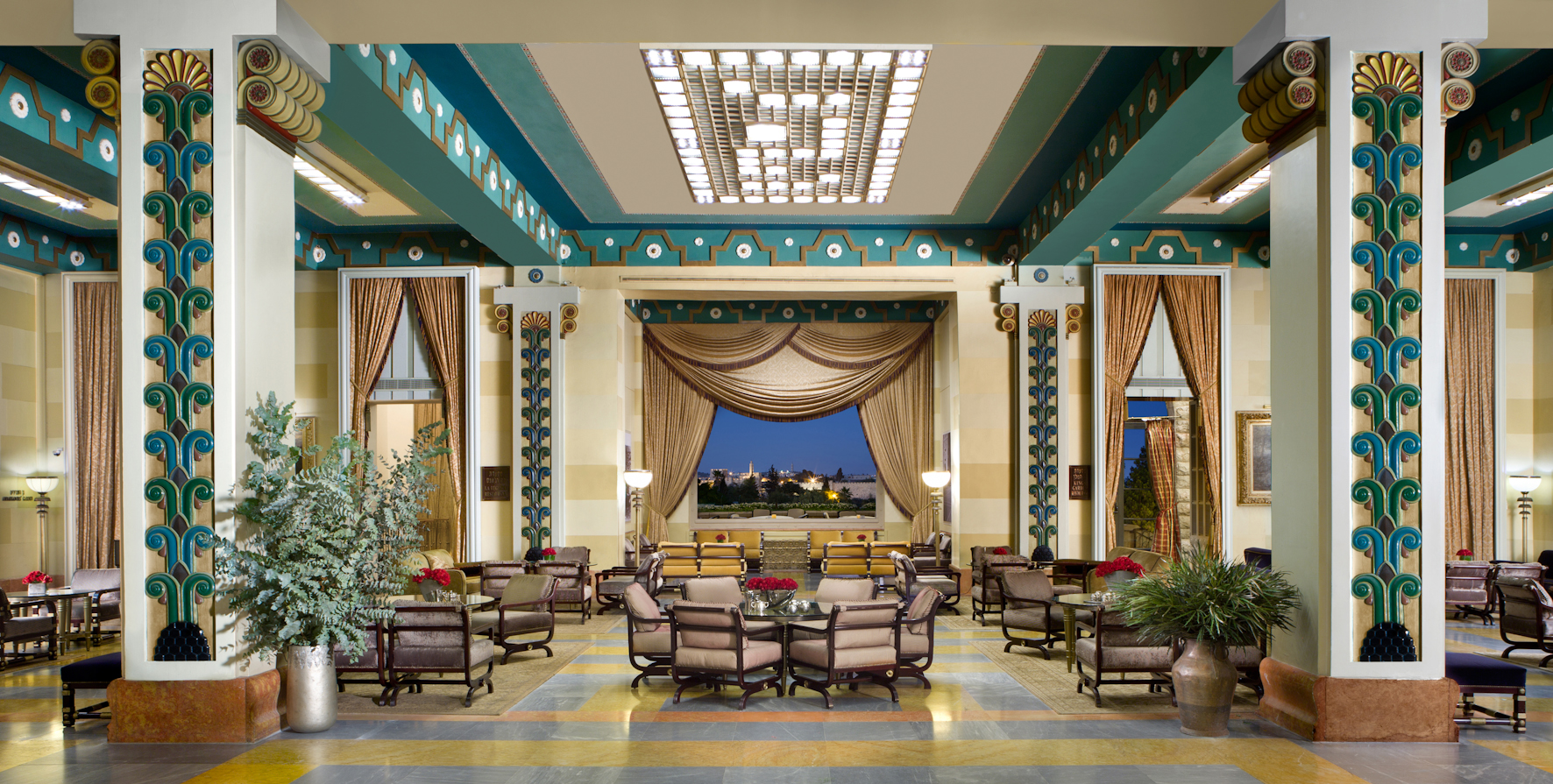 The 20-foot high ceiling and elegant furnishings evoke a bygone era of grandeur, the view from the panoramic glass wall of the Old City of Jerusalem is awe-inspiring, and the staff — so used to caring for foreign heads of state since the hotel first opened in 1931 — are clearly well-trained and devoted to their mission of making all their guests feel like “royalty”, an art which delineates only the truly finest hotels in the world. 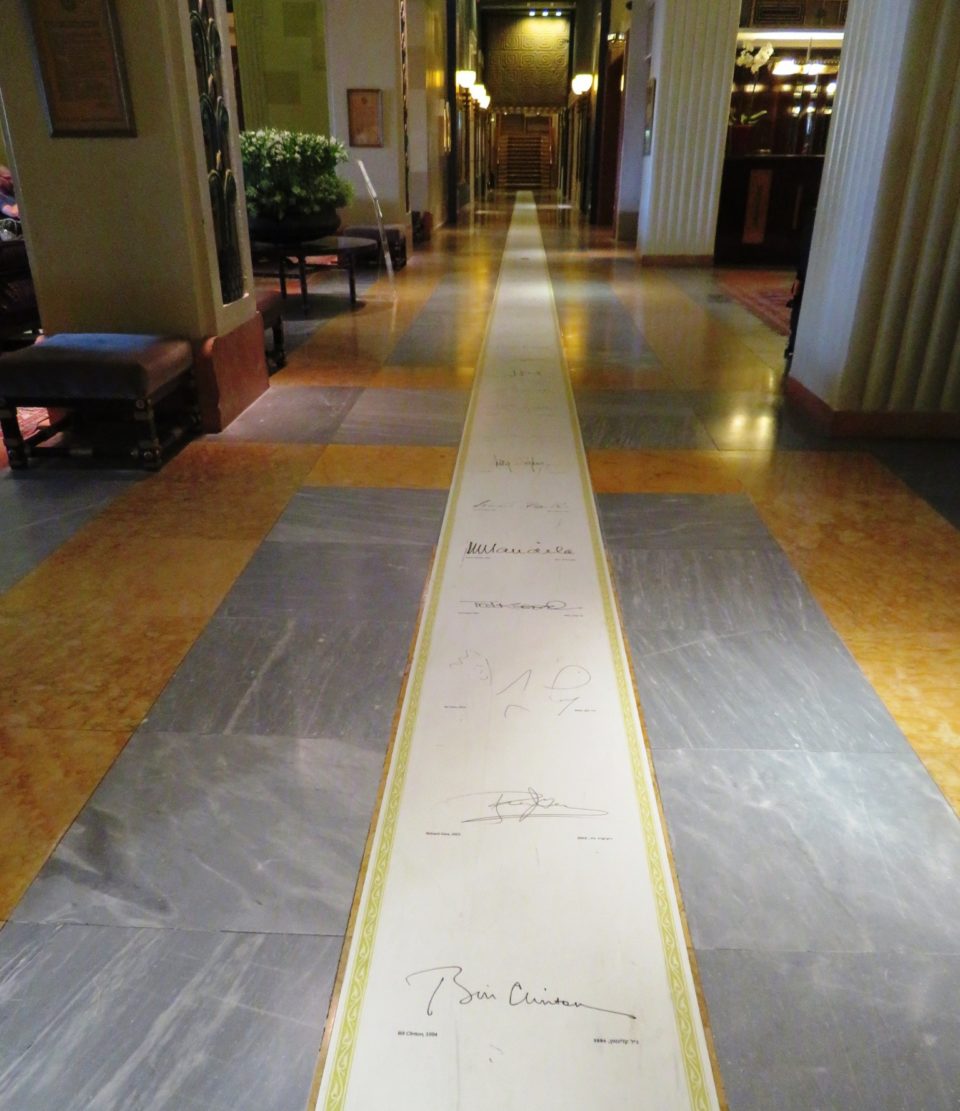 In fact, if you have any doubt about following in the footsteps of royalty and celebrity once you enter into this legendary hotel, just take a stroll past reception down the long hallway renowned for its walkway of fame composed of individual tiles with the signatures of some of the many visiting dignitaries over the past 70 years or so.  From King George V, King Hussein, Winston Churchill and Simone de Beauvoir to Jacqueline Kennedy Onassis, Henry Kissinger, Anwar Sadat, Nelson Mandela, Paul Newman, Isaac Stern and the list goes on … you know right away that you are in good company and that the staff will take care of your every need … from home-made chicken soup to fresh mint leaves from the hotel’s herb garden for your morning tea.  And this is the case even if you aren’t there to help promote world peace, negotiate a treaty, conduct an orchestra, create artistic tapestries for government buildings, write a ground-breaking book, or star in a blockbuster movie being filmed in the Holy Land. 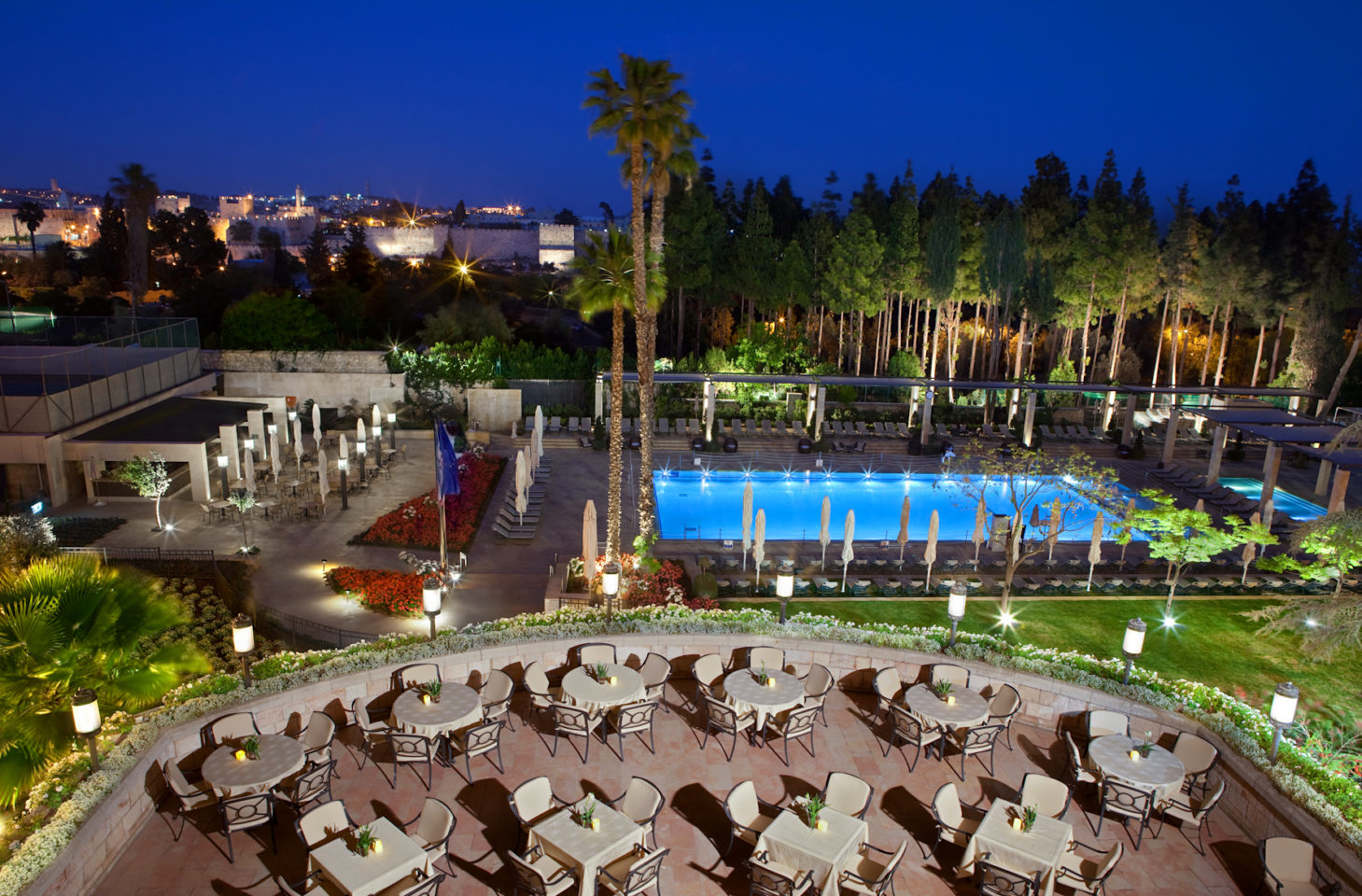 So very soon after arriving and even though we had been traveling for 18 hours, I relaxed deeply and had the sense that I was being well taken care of … as if I were the Lady of the Manor.  I was not disappointed.  In fact, my only disappointment was at departure — the King David lifestyle is so very easy to get used to and truly beckons its guests to return. 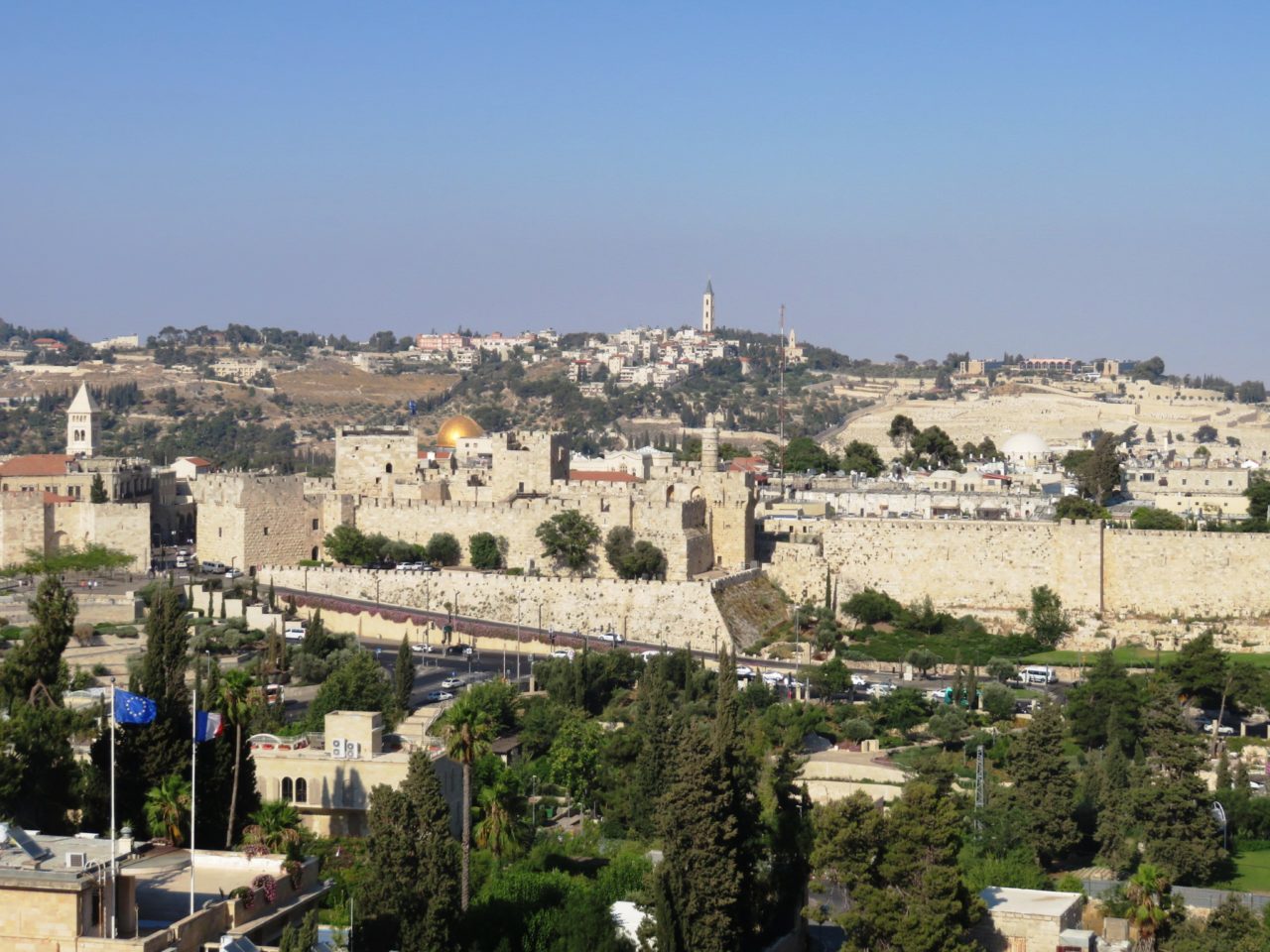 But superb service is not the only hallmark of The King David, and the hotel’s historical significance extends well beyond its walls.  They King David occupies a prime piece of real estate just outside the Old City of Jerusalem such that all the rooms overlooking the gardens and facing the Old City have glorious views of the Old City.  And isn’t that why you come to Jerusalem … to step back into history and walk in the footsteps of the many religious and historical figures who have lived within the walls of this ancient city?  Well, you can begin dreaming about them as you gaze from your window or the spacious terrace off your room, imagining the life of this ancient city as it used to be.  A well-chilled glass of Israeli Chardonnay, served to us on our veranda to welcome us to the King David, made that “imagining” all the more enjoyable. 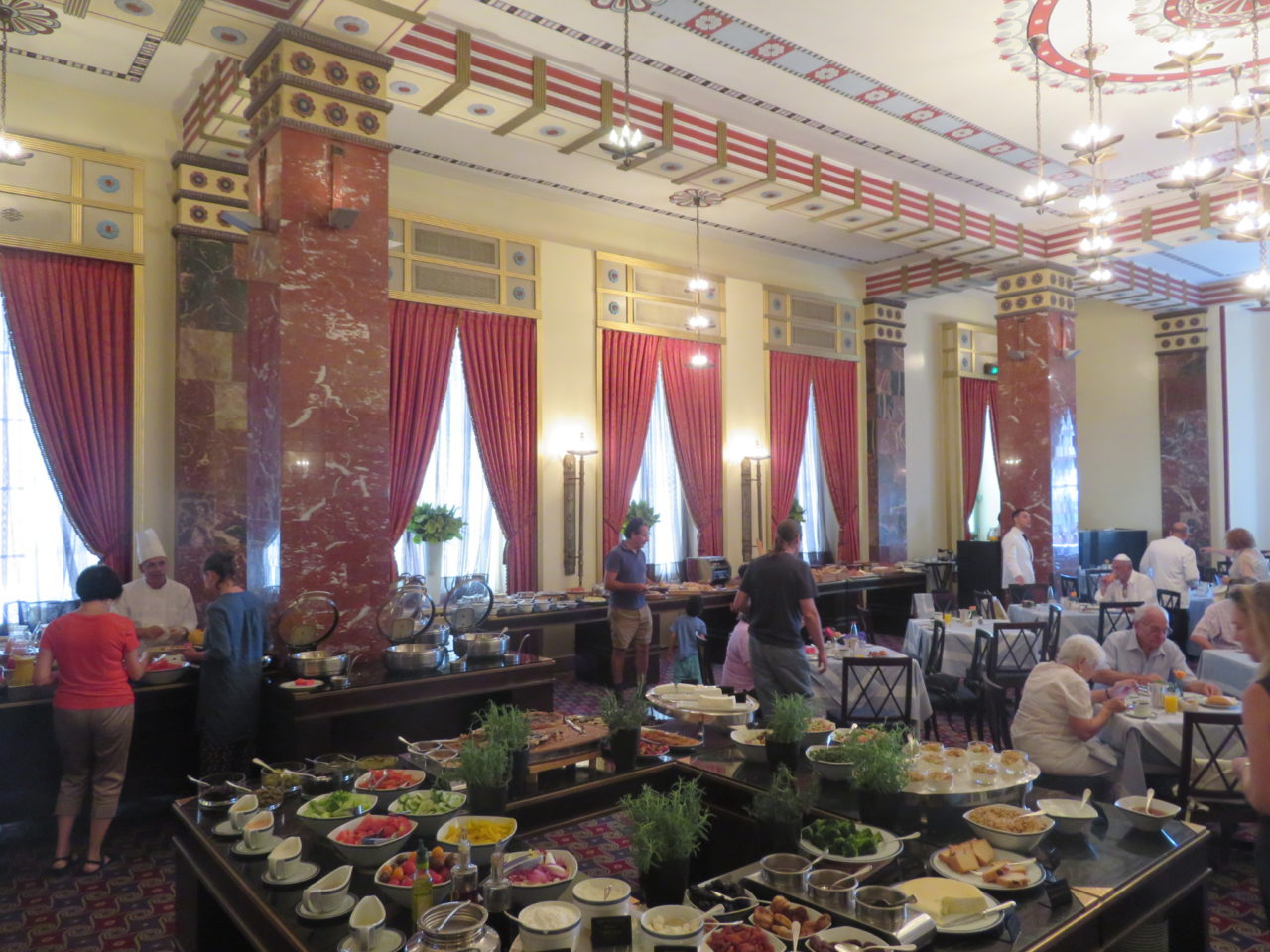 Guests of the King David can also appreciate this awe-inspiring view of old Jerusalem as they savor excellent cuisine in all three of the hotel’s major dining areas.  Breakfast is served in the dining area of the grand President’s Hall with its impressive exotic decor.  While there is a magnificent large buffet with many hot and cold dishes from which to choose, you can also order a dish from your waiter to be cooked to your specifications from the breakfast menu of chef specialties at your table.  Your waiter will come greet you after you are seated to take your drink order and to inquire whether you would like a hot dish prepared for you by the chef. 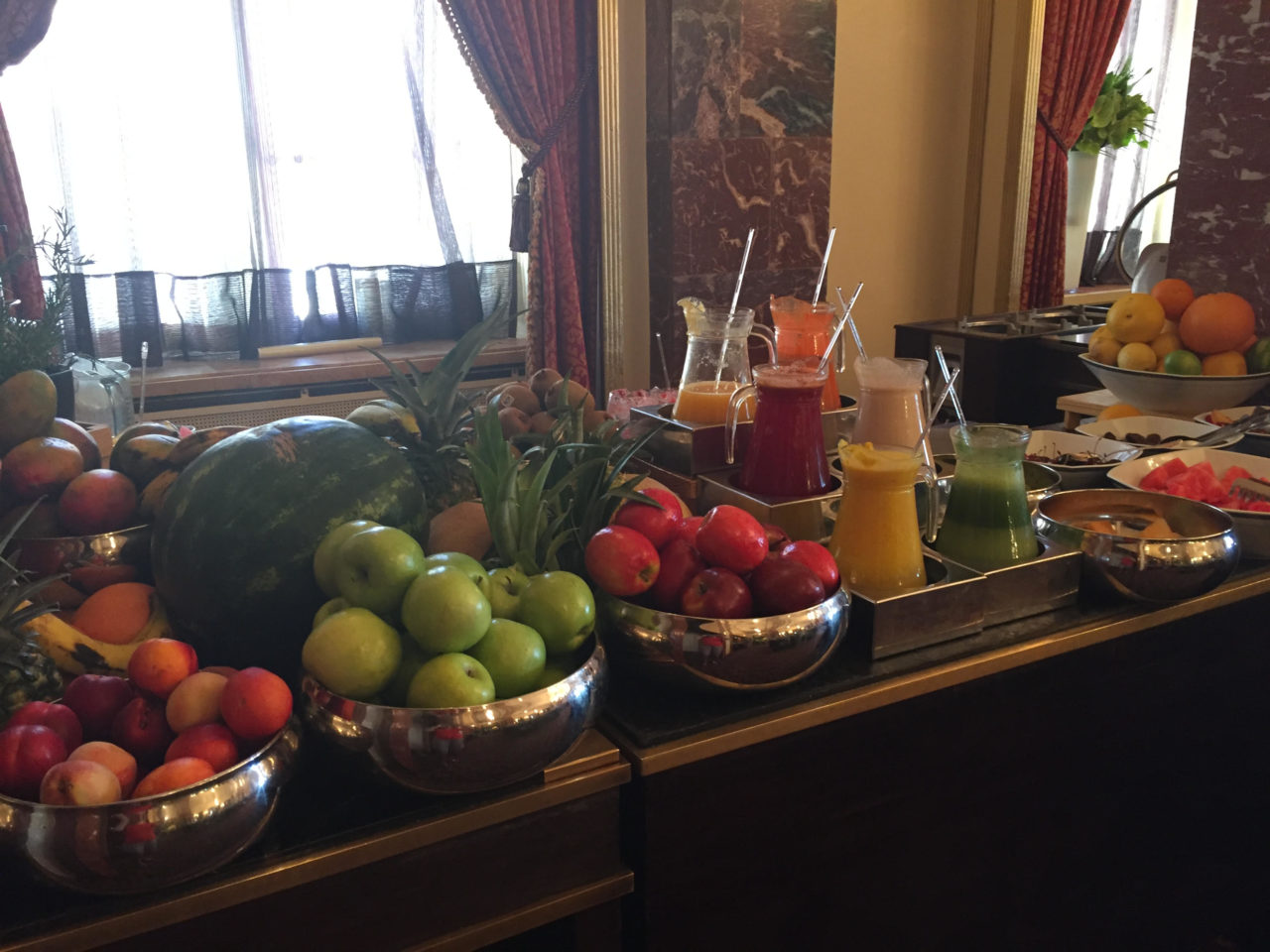 I always ordered a tall glass of freshly squeezed orange juice, a glass of cold ice water and a pot of green tea with fresh mint leaves, and then went onto the buffet and filled my platter with aromatic fresh fruits and salads, slices of vegetable and cheese quiches, local artisanal cheeses, smoked fish, olives and flavorful hot vegetable dishes of eggplant baked with tomatoes, pine nuts, and fresh olive oil or zucchini fritters.  After I finished this first platter, you might think I would be full but I always ordered a double espresso from the waiter and then returned to the buffet for my irresistible”dessert” of freshly baked Israeli poppy seed or orange cake. While facing the huge buffet area of the President’s Hall affords an interesting view of people-watching, the restaurant’s enormous rear bay windows afford a charming view of the gardens and the Old City walls. When the adjacent Ambassador’s Garden Room is opened up for breakfast, this view is majestic. 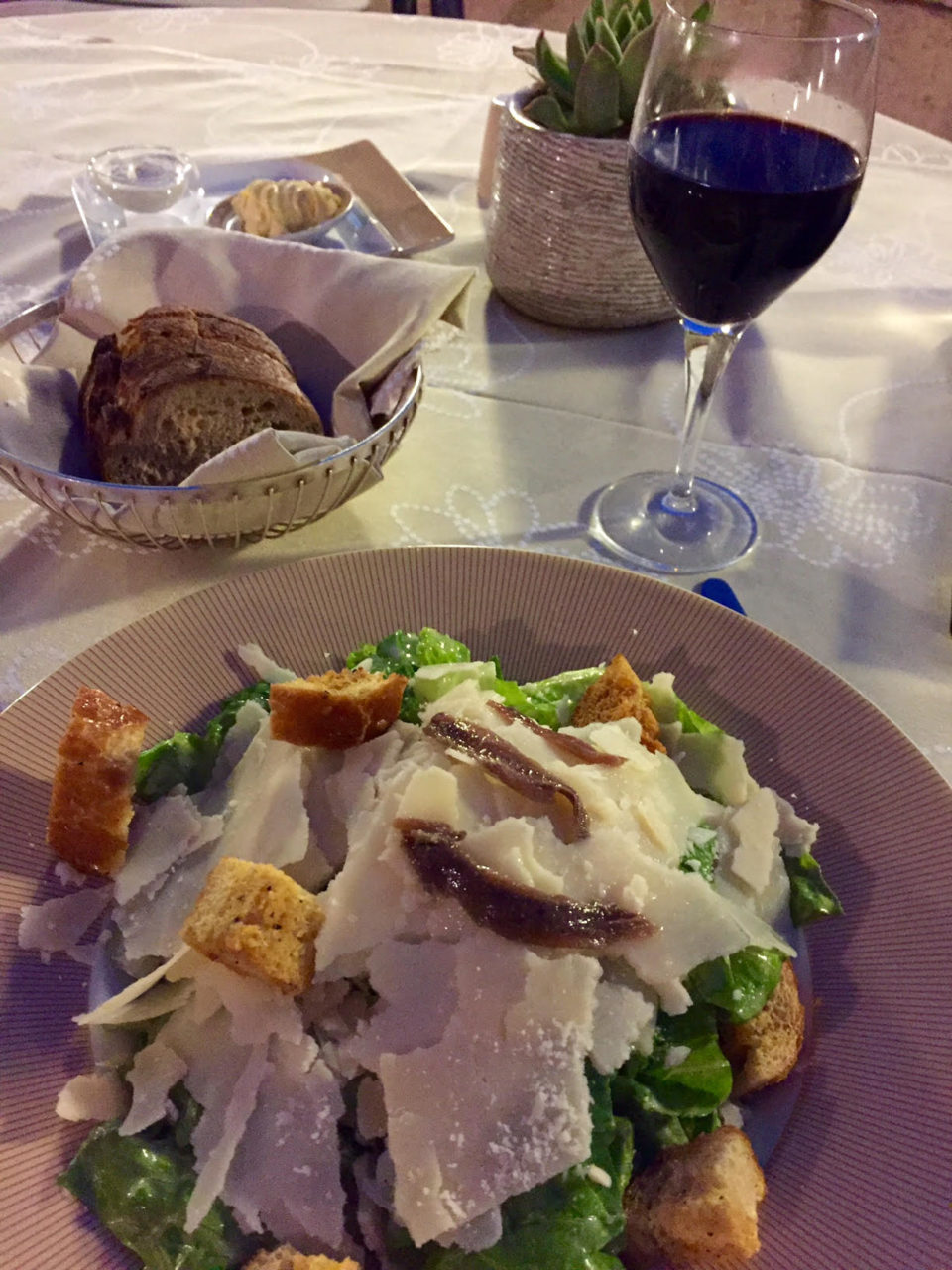 Lunch and a casual dinner are available at the hotel’s Kings Garden restaurant, which also offers splendid views of the Old City to complement its fish, dairy and vegetarian dishes.  The exterior portion of the restaurant, situated on a magnificent stone terrace overlooking the pool, tennis court, and hotel gardens, is a favorite spring and summer spot for dinner as it is graced by refreshing breezes, even in mid-summer.   But the problem is — if you want to call it that — the view is so enchanting and the breezes so inviting that one simply doesn’t want to leave … departing is such sweet sorrow. 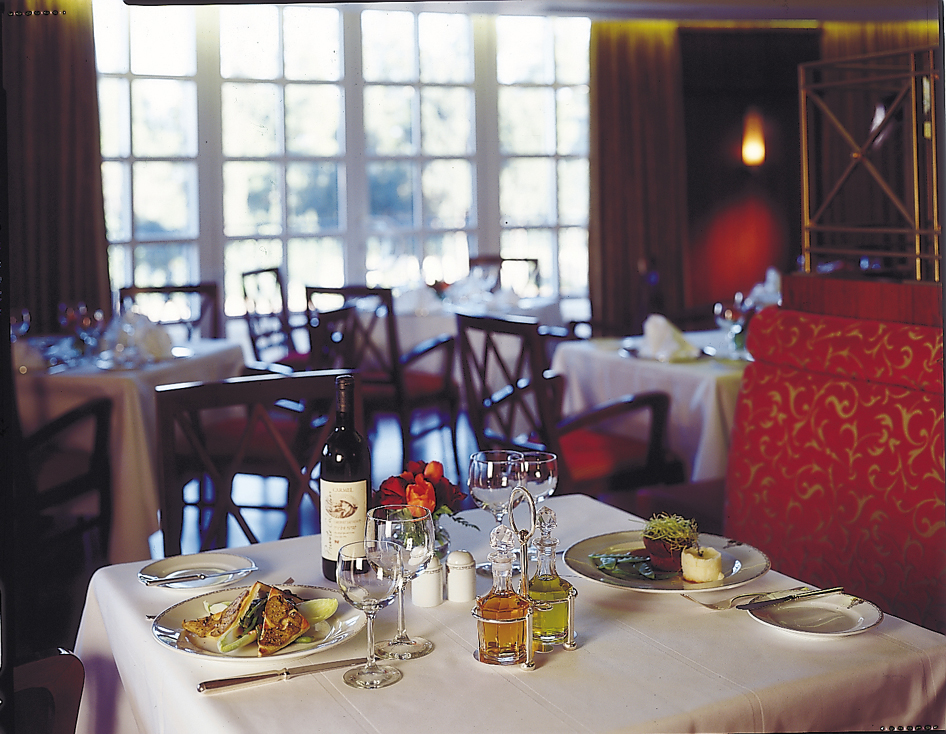 La piece de resistance for dining at the King David, is its 5-star restaurant, La Regence, offering Chef David Biton’s Israeli imprint on the best of contemporary French and international cuisine. The sweeping view from the restaurant’s balcony over the hotel’s pool, tennis courts and gardens onto the Old City, made even more magical by a starry night, magnificently enhances Chef Biton’s memorable cooking.  But describing the 12-course tasting menu he specially prepared for us, which we consumed along with almost two bottles of a divine Montefiore Cabernet Sauvignon over a period of at least 3-1/2 hours, definitely deserves its own article. 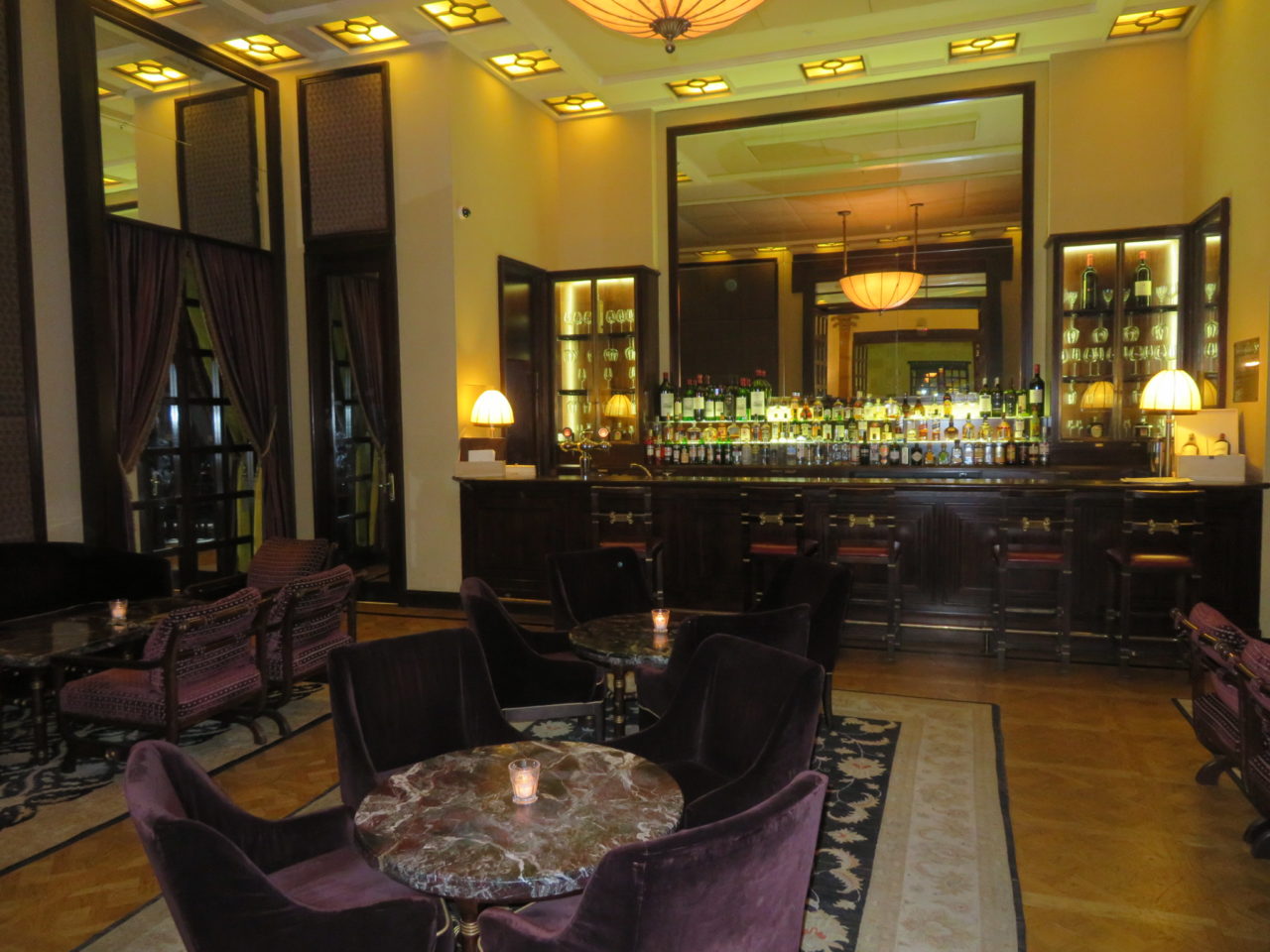 Suffice it to say that wherever you choose to eat in the venerable King David, you will enjoy memorable views of the Old City of Jerusalem that enhance your visit and leave you with extraordinary memories.  Plus, your mood cannot help but be influenced by the plush, comfortable seating arrangements in the public spaces of the hotel complemented by high ceilings and moldings with exotic decorative motifs taken from Assyrian, Hittite, Phoenician and Muslim buildings architecturally utilized “to evoke by reminiscence the ancient Semitic style and the ambiance of the glorious period of King David.”  And then there are the historic mementos, like the table in the Reading Room on which the 1994 peace treaty between Israel and Jordan was signed.  As you move around the hotel, you will find the ambiance serene but you can feel history come alive. 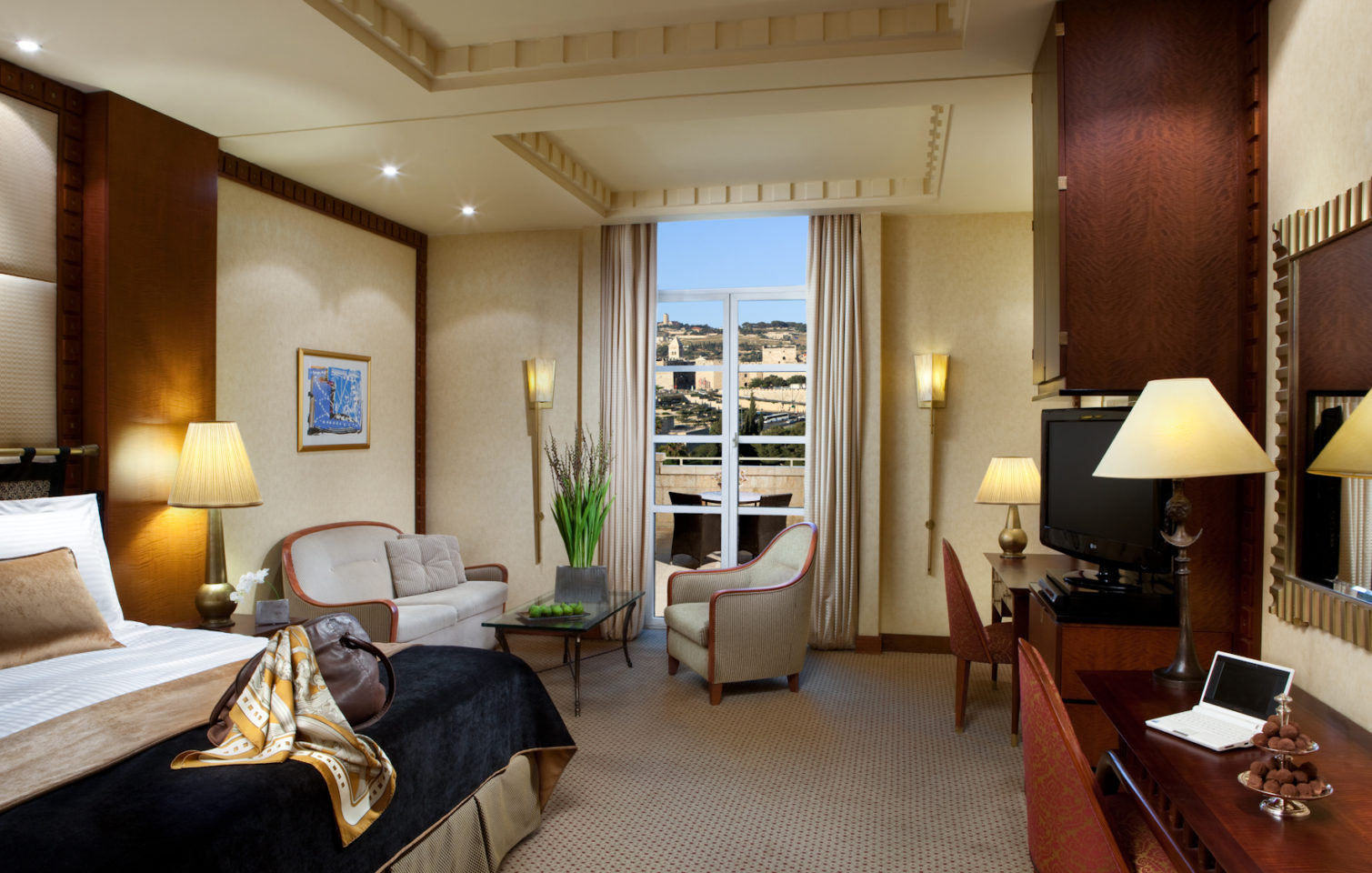 What type of accommodation do you prefer for a trip as significant as a visit to Jerusalem, perhaps the most historic city in the world?   The King David has 233 rooms, from those with new city views to those with Old City views … many of which offer large verandas … and onto seven categories of suites, from Garden to Presidential and Royal suites, all of which overlook the Old City.  All of the hotel’s rooms are luxurious and well-equipped with meticulous attention to detail to make your stay as comfortable as possible.  Plus, the King David offers the biggest outdoor swimming pool in Jerusalem as well as a children’s pool, both of which are heated in season, a children’s play area, and the requisite luxury hotel amenities, including a tennis court, gym, spa and complimentary WiFi throughout the hotel. 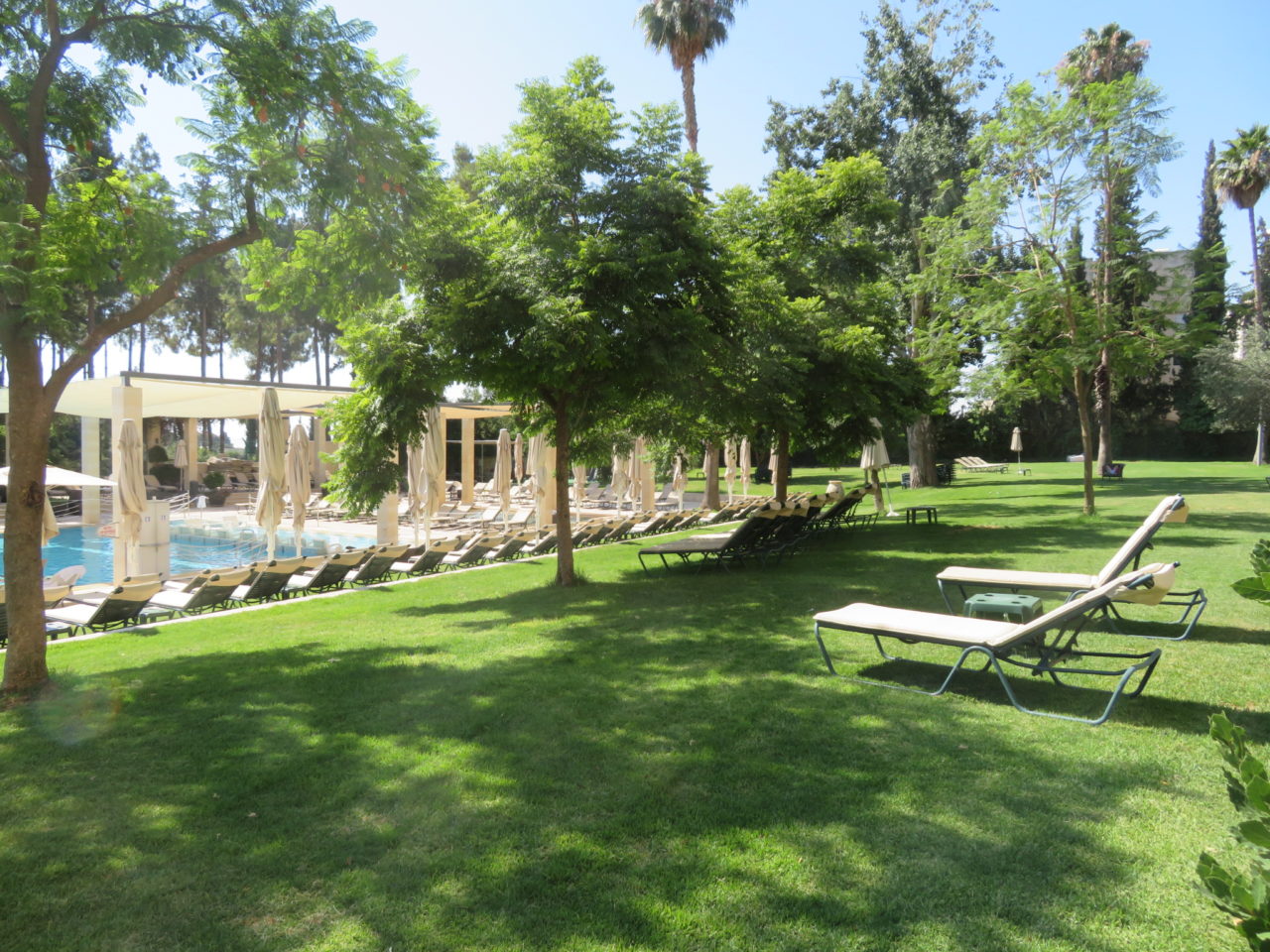 While taxis and “Uber”-style taxi service known as “Gett” in Israel are readily available, the walk from the King David to the Jaffa Gate of the Old City is an easy 12 minutes.  We also enjoyed exploring the central part of the new city where the famous and not-to-be-missed Machne Yehuda market is just an easy 25 minute walk from the hotel.  So the location of The King David Hotel is very convenient for touring by foot, and an easy taxi ride away from Jerusalem’s world-class museums and other cultural and historical sites. 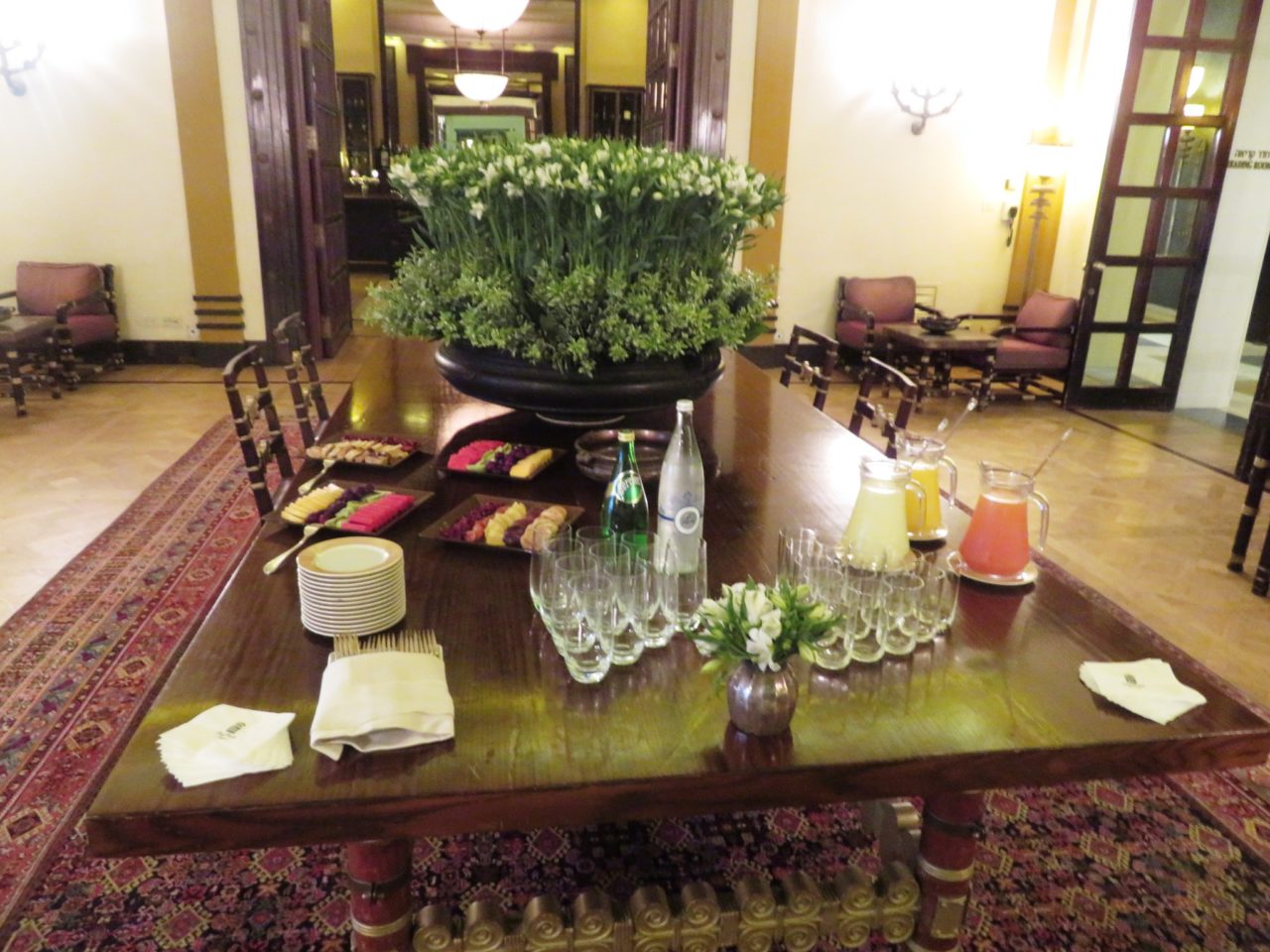 King David Hotel, Jerusalem Israel – Light refreshments in the Reading Room … on the table used for signing the historic peace treaty between Israel and Jordan !

In addition to its first-class service, unforgettable views of the Old City of Jerusalem throughout the hotel complemented by exotic decor, old world elegance, superb cuisine, luxurious rooms, serene ambiance and prime location, perhaps what is most extraordinary about the legendary King David Hotel is its history.  Since it opened more than 80 years ago, The King David Hotel has served as the official venue in Jerusalem for banquets and state occasions and entertained a lengthy list of the world’s most famous dignitaries, celebrities and VIPs.  Weighty decisions regarding world history have been debated, negotiated and finalized within these walls.  Artistic talent has been well nurtured here.  If only these walls could talk … 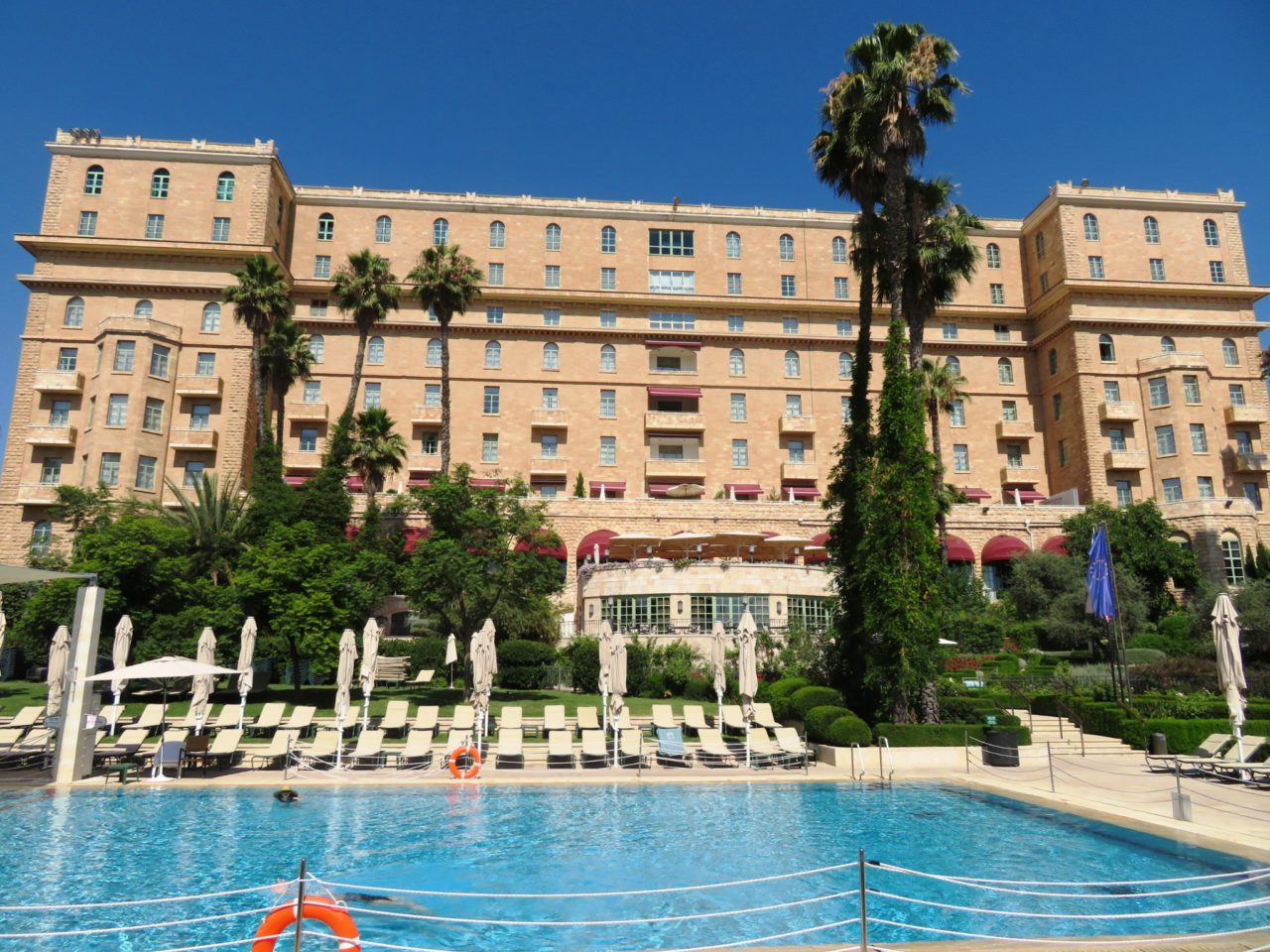 But inspired by the records of history, the royal service we receive within these walls, and the ideal ambiance provided by the King David Hotel, we can walk in the footsteps of those who have created history for over 3,000 years and make our own history while staying in Jerusalem,  the most historic city in the world …at The King David Hotel, the most famous hotel in Israel.  If you go, I promise that you will have a trip you will never forget.