Moscow may not yet be considered one of the top 10 destination cities in Europe for tourist travelers but it is well on its way to becoming one of its most fascinating destinations. We recently visited Moscow at the end of a marvelous and eye-opening cruise, Waterways of the Tsars with Viking River Cruises.  We toured St. Petersburg and then traveled to Moscow through some of Russia’s most important lakes and rivers, stopping along the way at historic towns and cities. Although I had read somewhere that Moscow was now home to more billionaires than any other city in the world, I was still surprised at the enormous changes which had taken place in what I had until then considered to be a stoic, stark and frankly unappealing city.

What a phenomenal change has taken place since I last saw Moscow, which truly impressed me as having become a world-class city. My previous visits to Russia’s capitol city had been as an international business executive a couple of decades ago. The hotel where I used to stay, the very luxurious and comfortable Kempinski Hotel, had housed me in a very well situated room with a superb close-up view of St. Basil Cathedral and the Kremlin.

But my trips during the decades preceding and following the dissolution of the Soviet Union were not chock full of positive memories. I still have vivid recollections of the machine-gun toting security guards pacing the sidewalk outside my hotel, the empty shelves of the GUM Department Store on Red Square, and the generally drab, boring and almost deserted streets which were the backdrop to my taxi rides around the city from one appointment to another.

Imagine my astonishment when my first experience upon returning to Moscow recently was to be caught in the early morning rush hour which seems to attract a fair number of the four million cars now navigating the streets of the city. Surrounding us were not the Russian-built box-shaped Ladas associated with the Russia of the Cold War and which have since become an object of curiosity rarely seen on the streets of the city. There were instead around us a myriad of modern cars, with no shortage of BMWs, Mercedes and other luxury models. 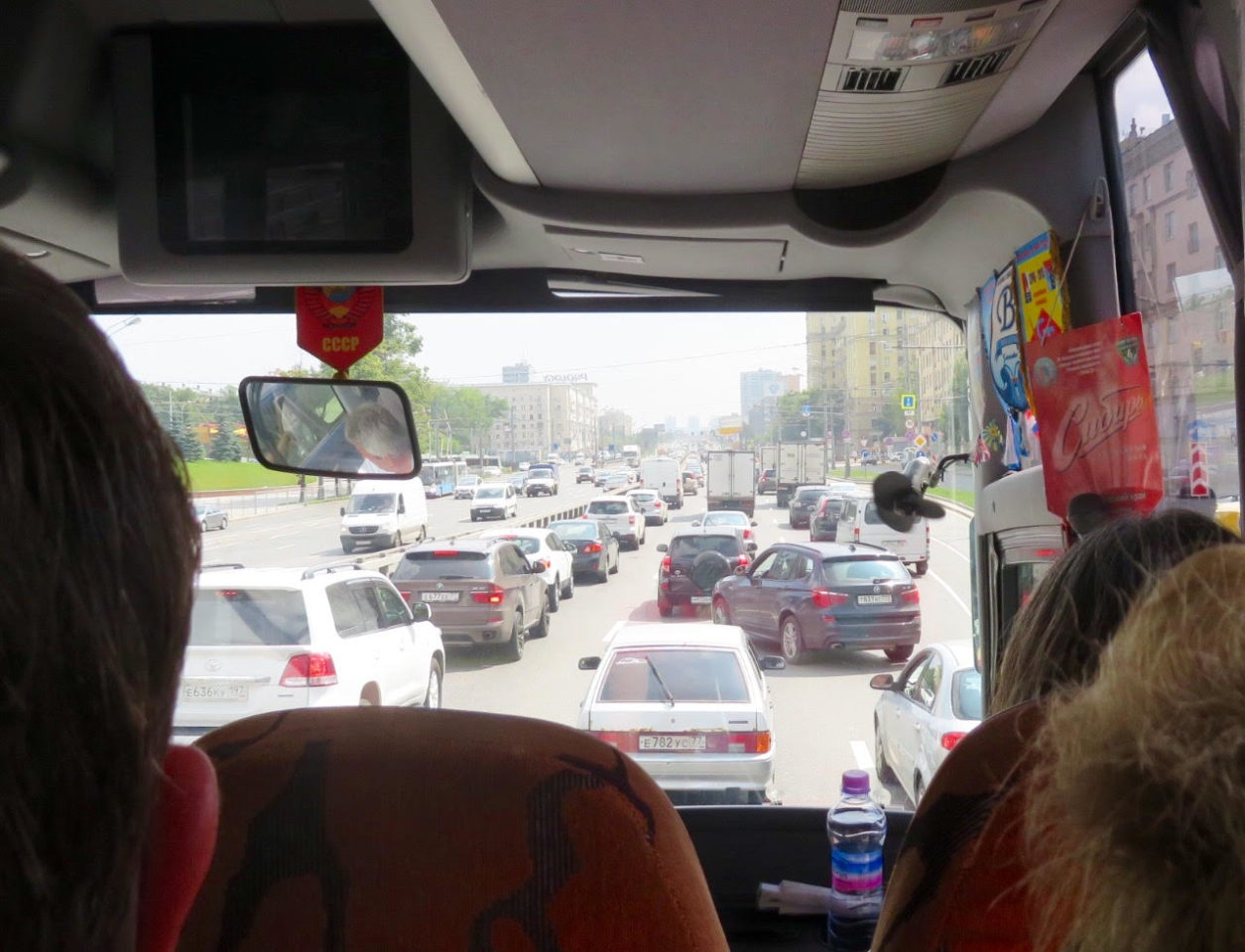 Greater Moscow, with its population of 20 million people, has become the largest metropolis in Europe and, thanks to the fall of communism and the introduction of private enterprise,  Moscow has generated incredible wealth for some of its citizens. And with the new riches has come a building boom which has forever altered the landscape of the city. 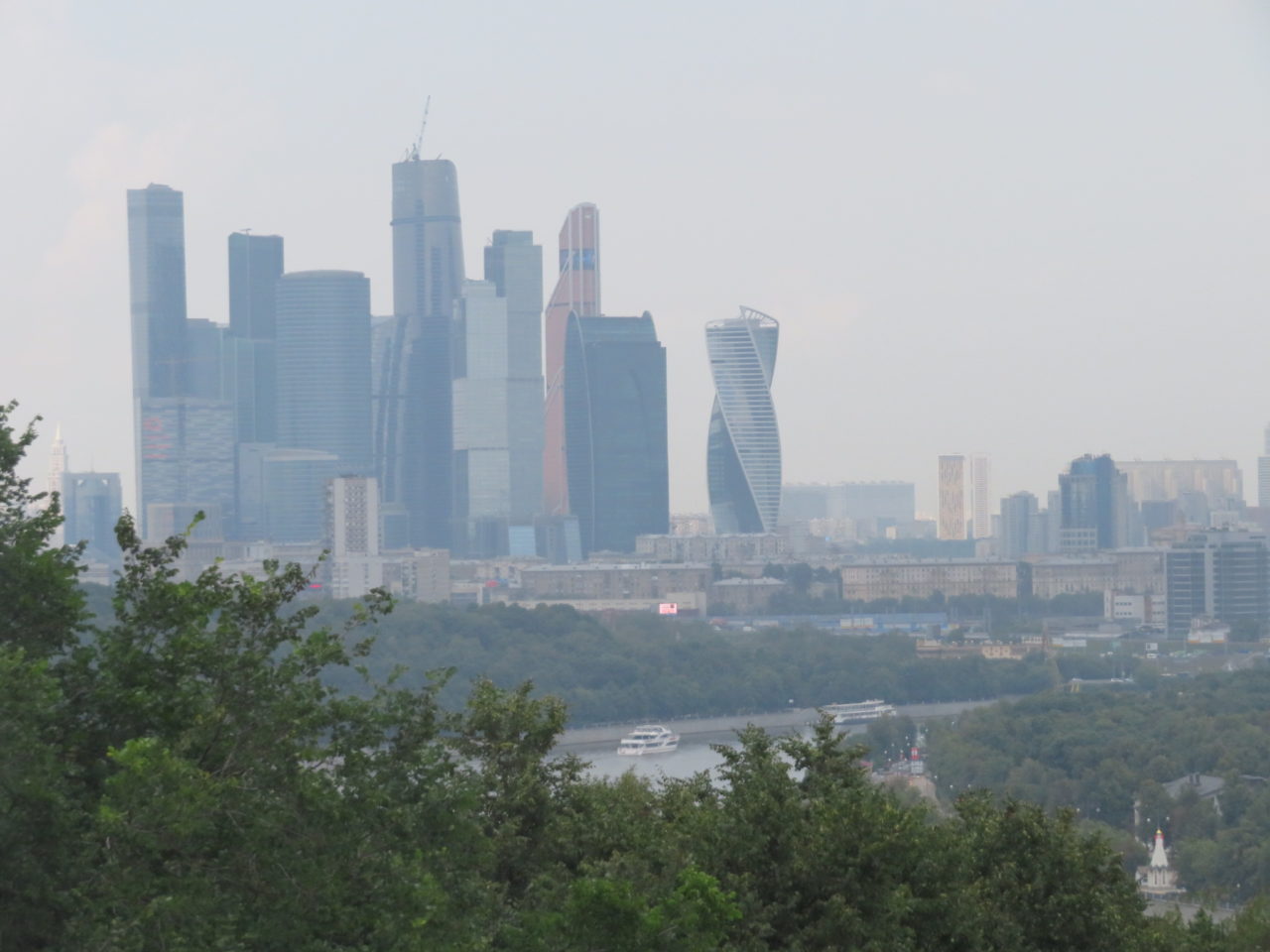 Moscow: Now a World-Class Destination ~The Skyline of the new Moscow

A large number of skyscraper cranes seemed to obstruct our views of the skyline wherever we looked around the city. Our guide explained that many new facilities, in particular hotels and sports facilities, were being built or expanded in preparation for the 2018 World Cup which is to be held in Moscow.  As our well-equipped German-model tour bus was inching its way towards the city center of Moscow down Tverskaya Street, formerly known as Gorky Street and considered to be the Champs Elysées of Moscow as well as one of the most expensive streets in the world (based on commercial lease rates), I had plenty of time to enjoy the sight of bustling and colorful pedestrian street traffic and the seemingly unending stream of cafés, shops and restaurants. This was not the Moscow of yesteryear. Indeed, Moscow has become a world-class destination. Forget your Cold War image of Stalinist-era architecture as representative of today’s Moscow. The Seven Sisters, the seven huge Stalinist skyscrapers which dominated the city’s skyline during the second half of the twentieth century, still offer an interesting architectural reminder of the past, as do the huge and ugly Soviet-era dormitory apartment buildings surrounding the city. Nowadays, strikingly modern and tall skyscrapers, as well as new commercial and residential buildings have taken over the skyline of Moscow, particularly outside of the historic city center. How attractive has Moscow become as a tourist destination?   In trying to answer that question, I had to ask myself what were the ingredients of a great destination city, and how did Moscow compare with other large cities in Europe. Here’s my score card:.

I think that a great tourist destination city must offer great public sights, sights that will generate awe and wonder and remain stamped in your memory of the city. The Eiffel Tower and the Arc de Triomphe  of Paris, the Parliament Buildings and Trafalgar Square of London, the Coliseum of Rome, the Brandenburg Gate of Berlin are some fine examples. 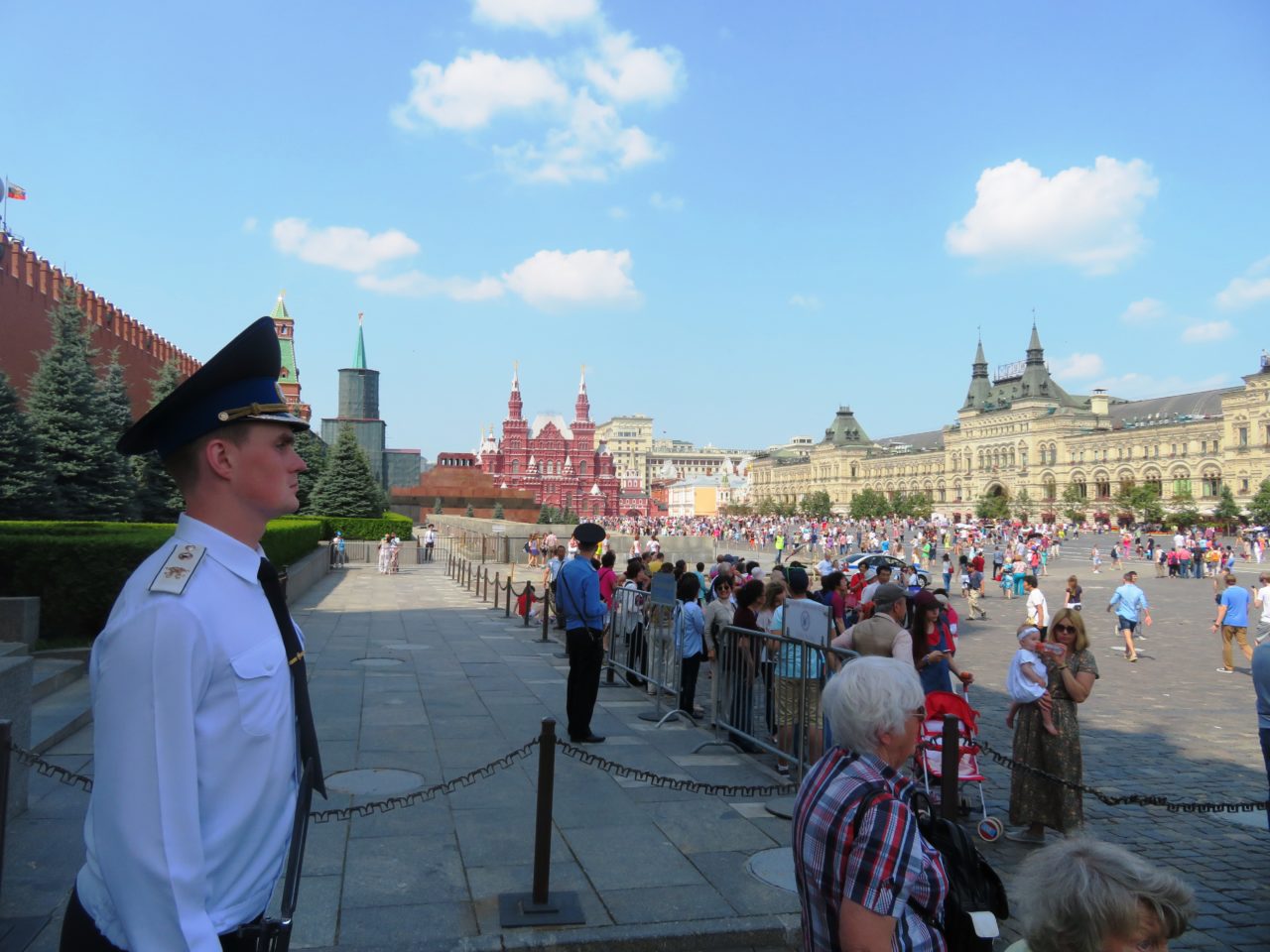 Moscow can rightfully claim a place among these elite cities, with its immense and magnificent Red Square anchored on its four sides by the incredibly beautiful St. Basil Cathedral, the walls, the buildings and the churches of the Kremlin, the colorful and stunning GUM Department Store complex and the deep red State History Museum of Russia. 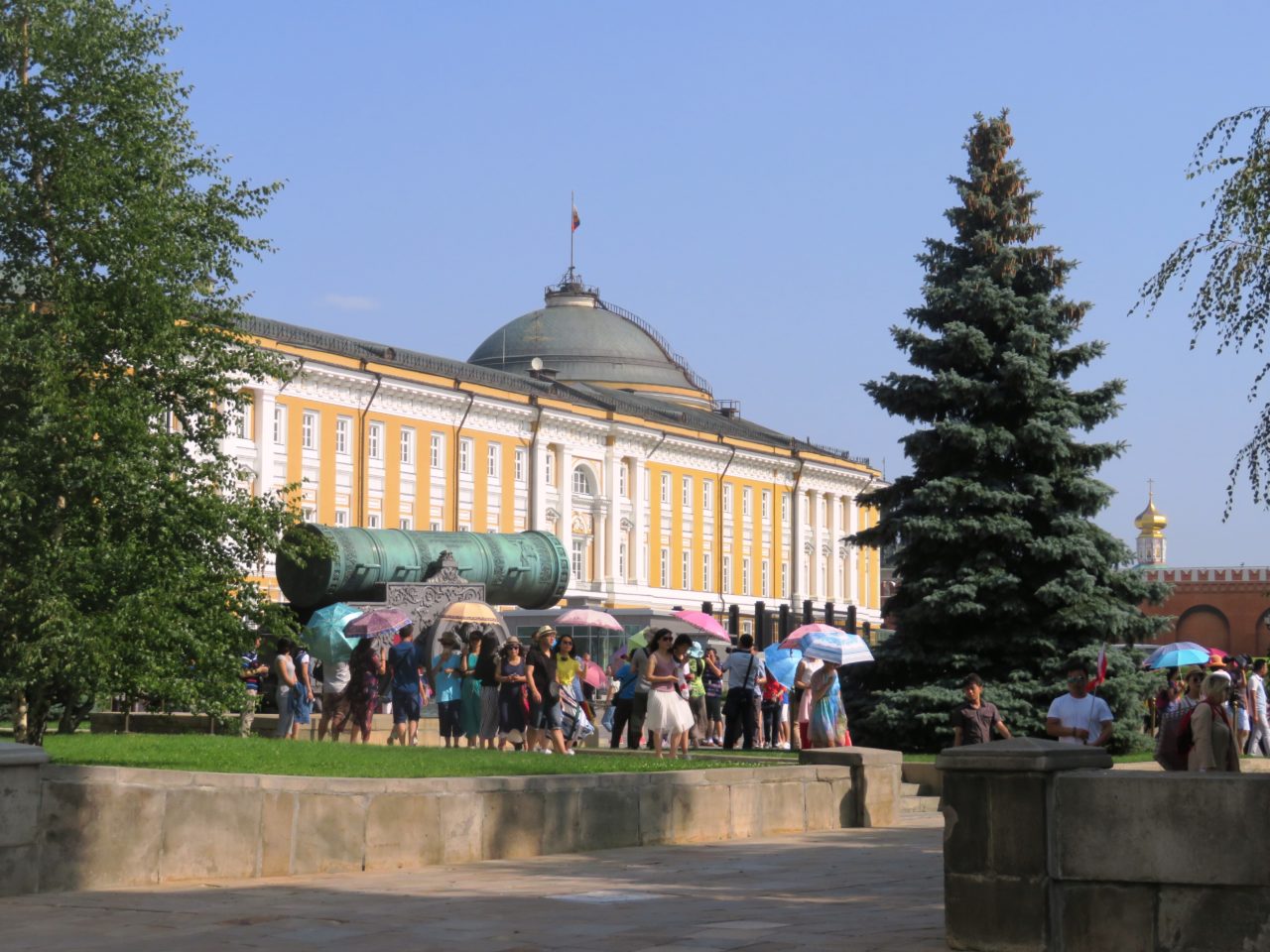 Moscow: Now a World-Class Destination ~ Inside the Kremlin

Moreover, Sparrows Hill, with its large panoramic lookout point over the city , its famous evening motorcycle gathering point and terrace andits front view of the historic Stalinist-era University of Moscow building, could well become another iconic sight of Moscow.

Paris has the most visited museum in the world, Le Louvre, as well as the Musée d’Orsay, to name but two. Similarly, the Victoria and Albert Museum and the British Museum are but two of several world class museums in London.

And now, in our opinion, Moscow has joined the select list of large cities with several world class museums.

The Armory Chamber Museum inside the walls of the Kremlin is the home to the treasures of the tsars and the most fascinating museum we visited during our latest stay in Moscow. Think of the Crown Jewels of the United Kingdom in the Jewel House of the Tower of London, but on a much grander scale. 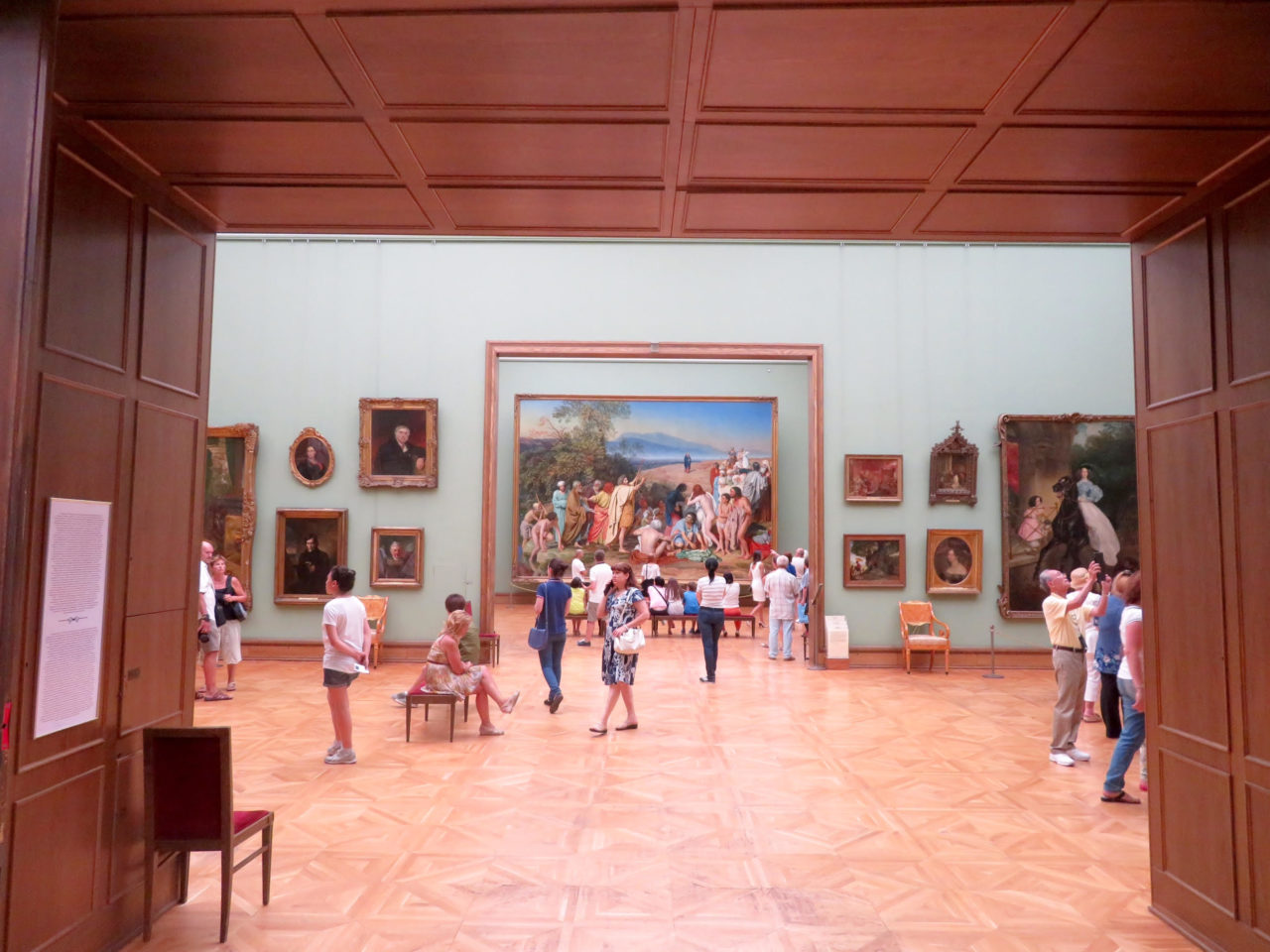 The Tratyakov Gallery in the city center of Moscow houses the world’s foremost collection of Russian art. The Pushkin Museum has the largest collection of European art in the city, including a very impressive number of Impressionist paintings. And the new large Jewish Museum is certainly the most hi-tech and most interactive museum I have visited around the world. 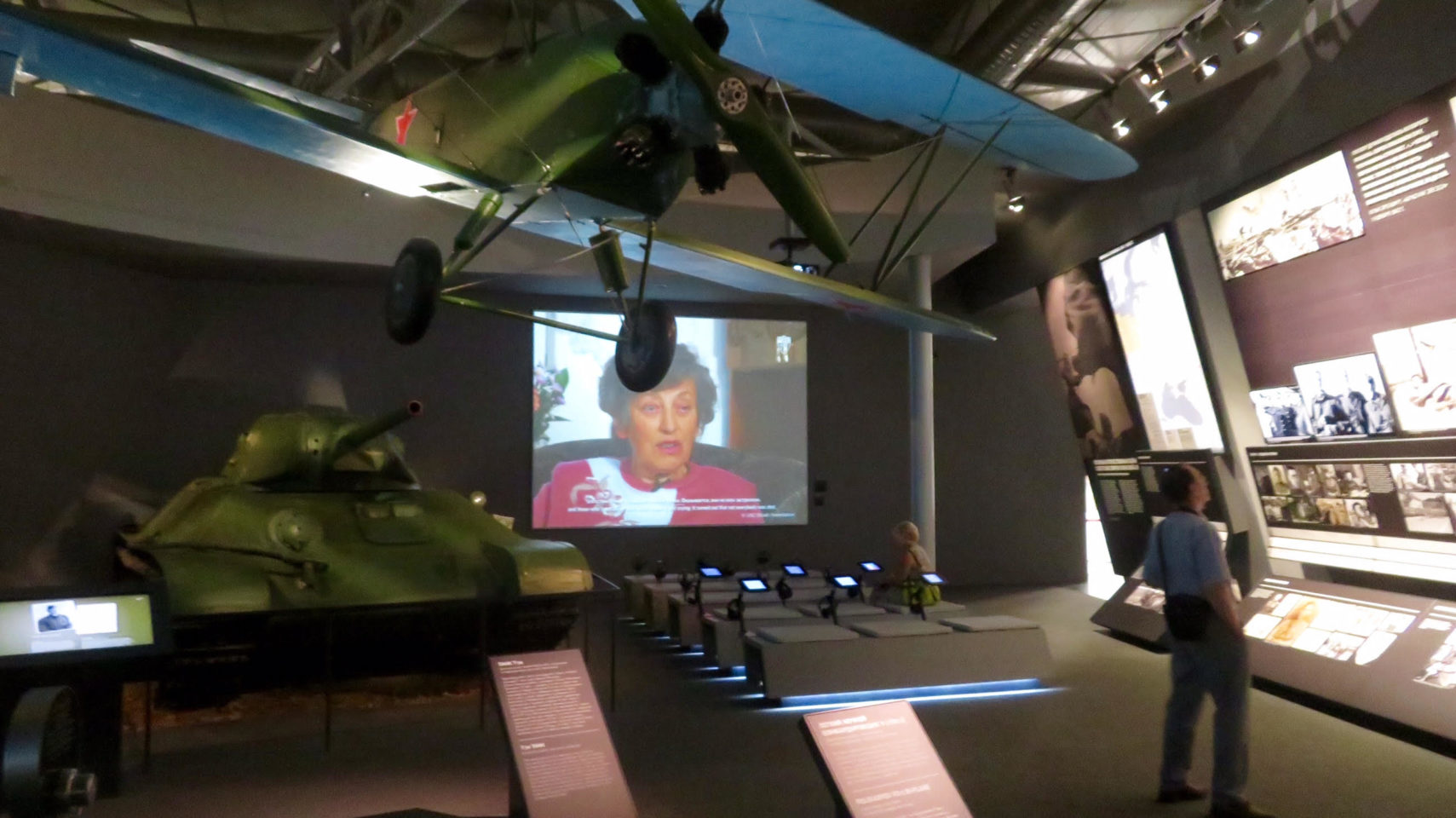 The luxurious Kempinski Hotel still occupies its prime location across the river from Red Square. Decades ago, it’s only major competition were the usually well located but otherwise uninviting government-owned hotels around the city.

Times have changed. Moscow now houses the most expensive luxury hotels in the world, according to a report I read. Nowadays, Red Square seems to be surrounded by a litany of five-star luxurious hotel properties, from the Ritz Carlton to the Four Seasons, the Intercontinental, the Park Hyatt and the St. Regis, but to name a few. And several other major hotel brands are building, renovating or investigating locations in Moscow. 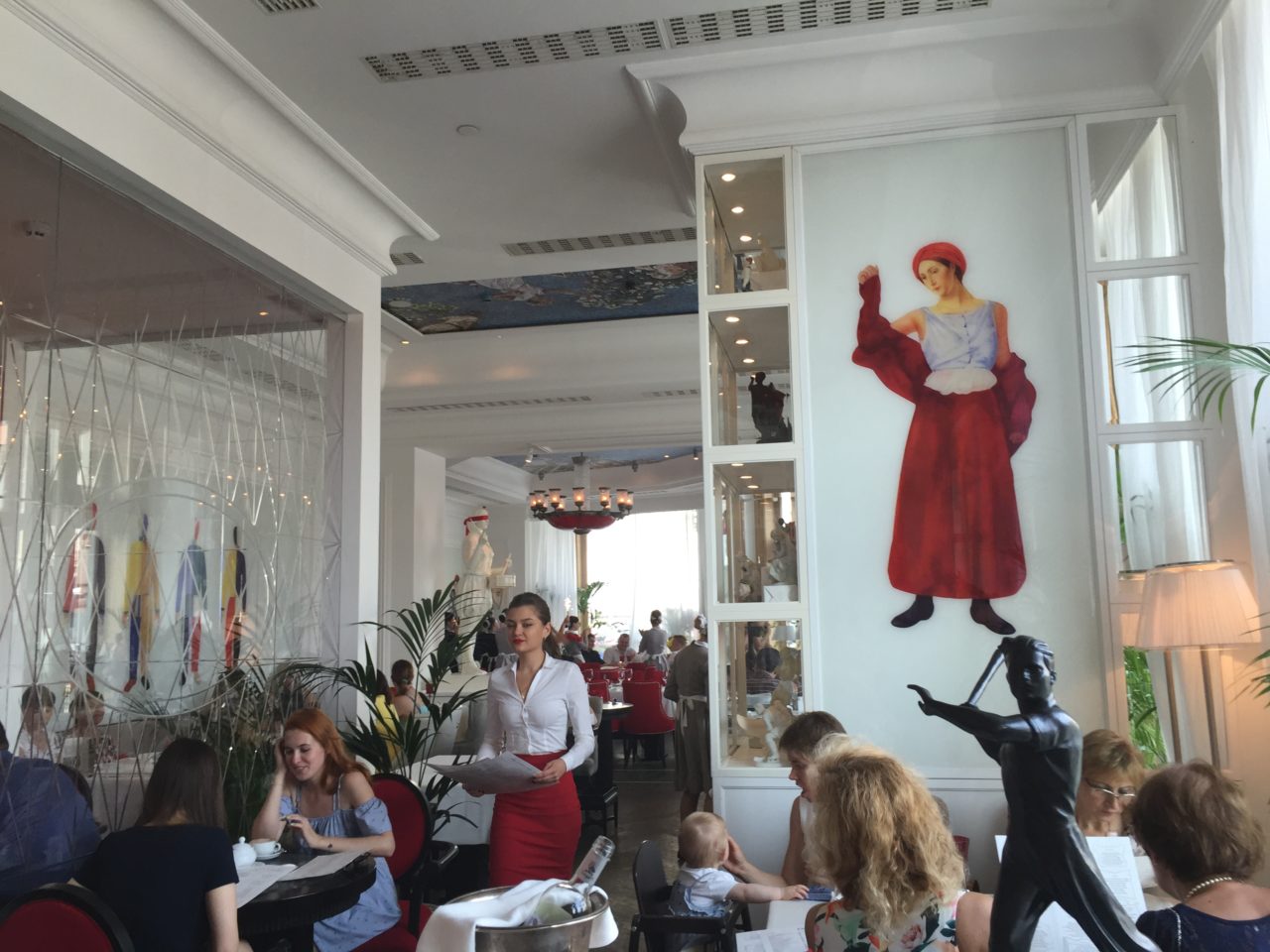 The restaurant scene in Moscow has also leaped into the twenty first century with a large collection of world class chefs and restaurants. We could only sample a few restaurants during our limited stay in the city, but we were impressed by those we visited and have no reason to disbelieve the glowing reports we received from other tourists who had dined at various other restaurants around Moscow. In addition, the number of cafés and fast food establishments occupying scores of retail space around town highlighted for us the growth of Russia’s capitol as a world class city. 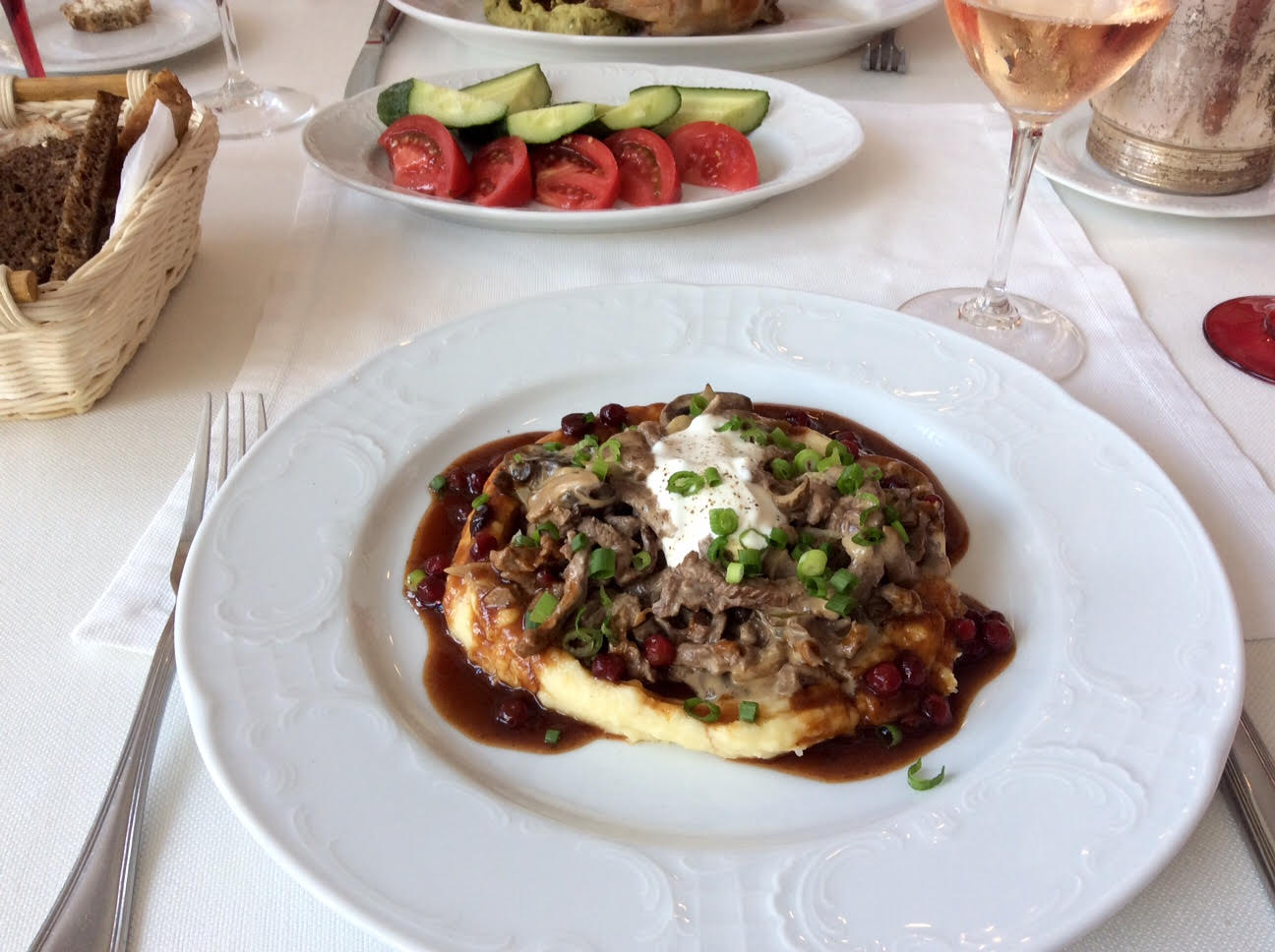 Moscow: Now a World-Class Destination ~ The Beef Stroganoff was delicious!

As for shops, there is no better illustration of the massive change which has occurred in Moscow than a visit to the GUM Department Store on Red Square. It is hard to imagine a more beautiful and luxurious department store anywhere in the world than the GUM of today. Empty shelves have given way to a plentiful and diverse array of the best which Russia and the world have to offer, set in a very upscale setting of several lavishly decorated floors and rows. Dior, Gucci, Burberry anyone? The parade of ultra luxurious concession shops inside GUM is a tribute to the best the world has to offer. 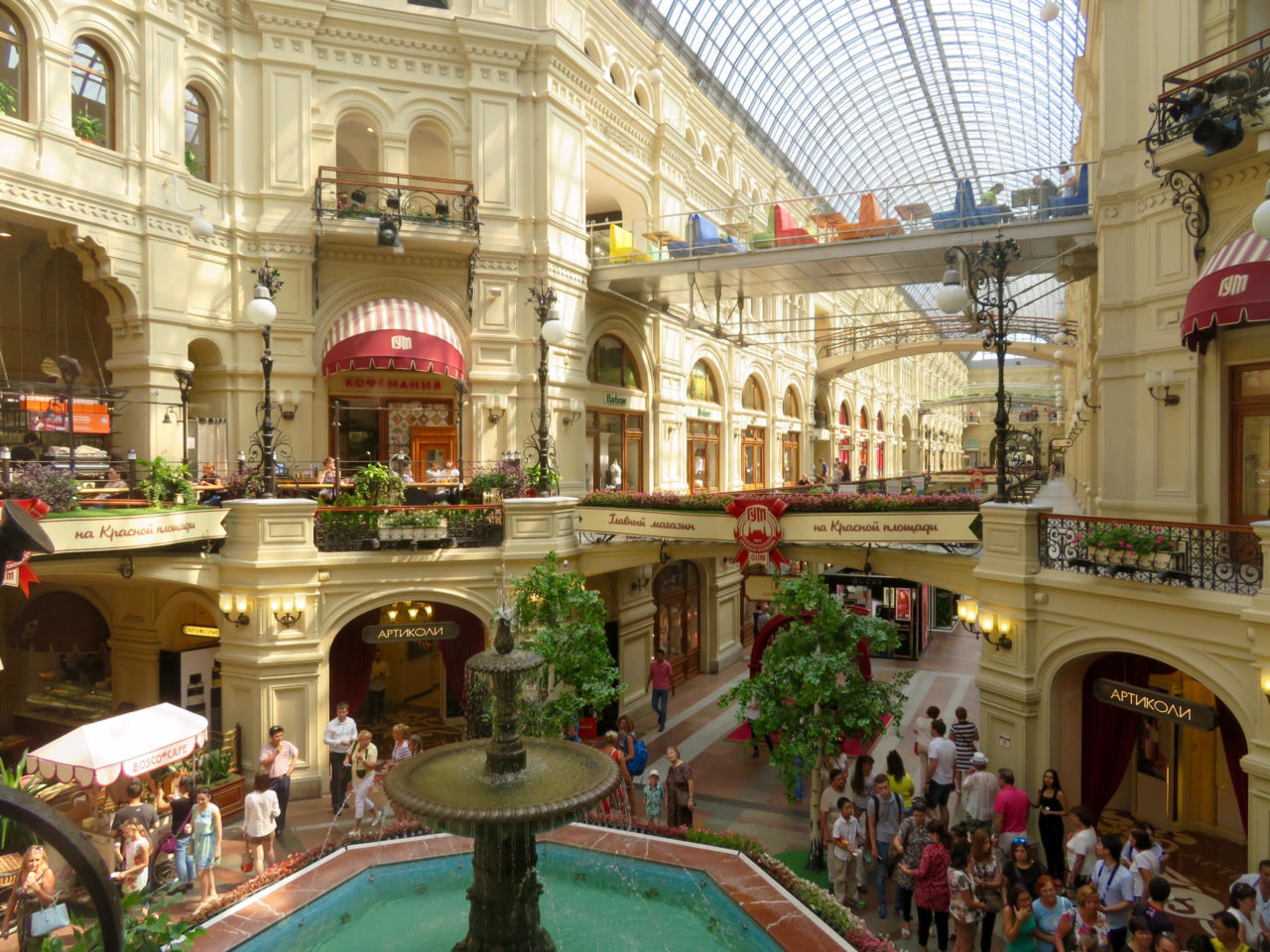 Each major subway system around the world has its own distinctive architecture and design, and all have significant appeal for the visiting tourist. However, the beauty of the large and historic Moscow metro system is in a class of its own, possibly outshining other metro systems around the world, including even the Paris Metro and its famed Art Nouveau entrances. After all, how many large cities of the world offer guided tours of their subway system, focusing on the works of art of each station? 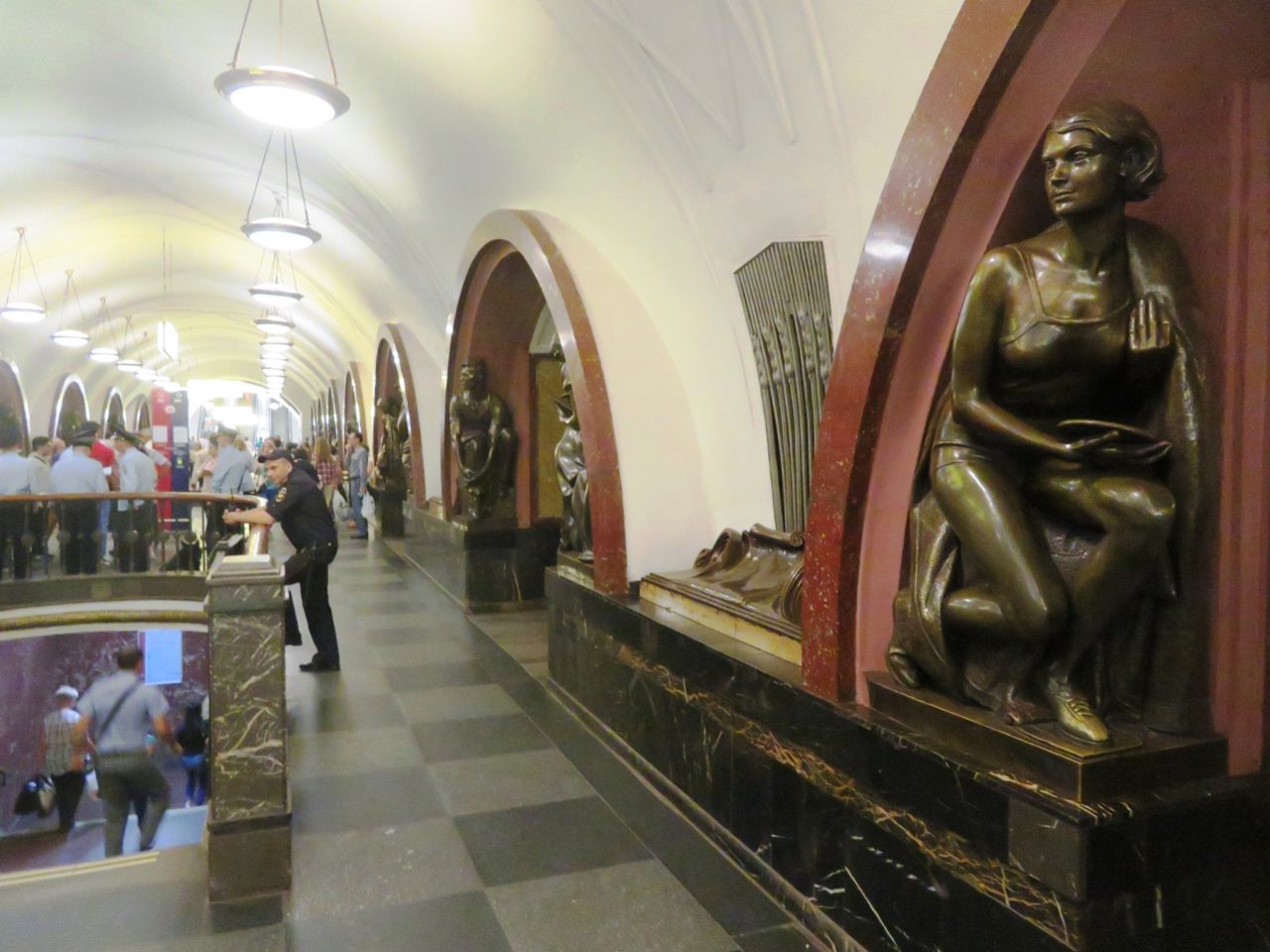 The bus system in Moscow also impresses with its extensive reach. Moreover, we noticed the large number of bike rental stations sprinkled around the center of the city. 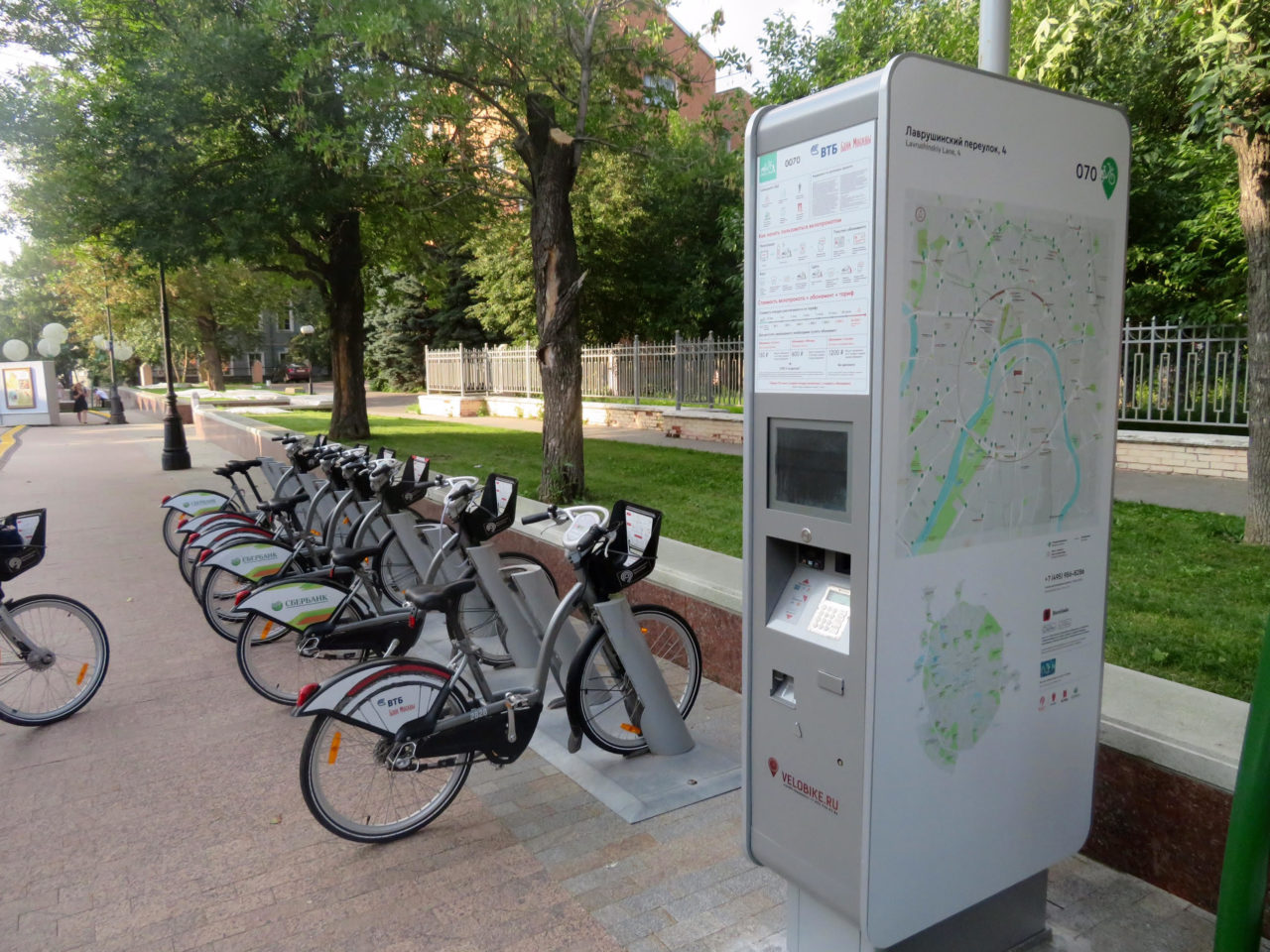 Plus, we experienced first hand the impeccable service of taxis and hired cars which chauffeured us to and from restaurants and museums we had decided to visit on our own. Transportation is easy and impressive in Moscow.

The attractiveness of a large city is greatly enhanced by the extent to which its history and culture have spanned long periods of time and are reflected in the architecture of its buildings, the makeup, customs  and way of life of its inhabitants, and indeed the whole fabric of the city.

Moscow is blessed with a fantastically rich although too often tragic history going back almost a thousand years. Bridging both the Western and the Eastern worlds, Russia has evolved its own unique language, culture, religion, even alphabet (Trying to decipher the Cyrillic alphabet as you tour Moscow will remind you of the unique history of Russia). 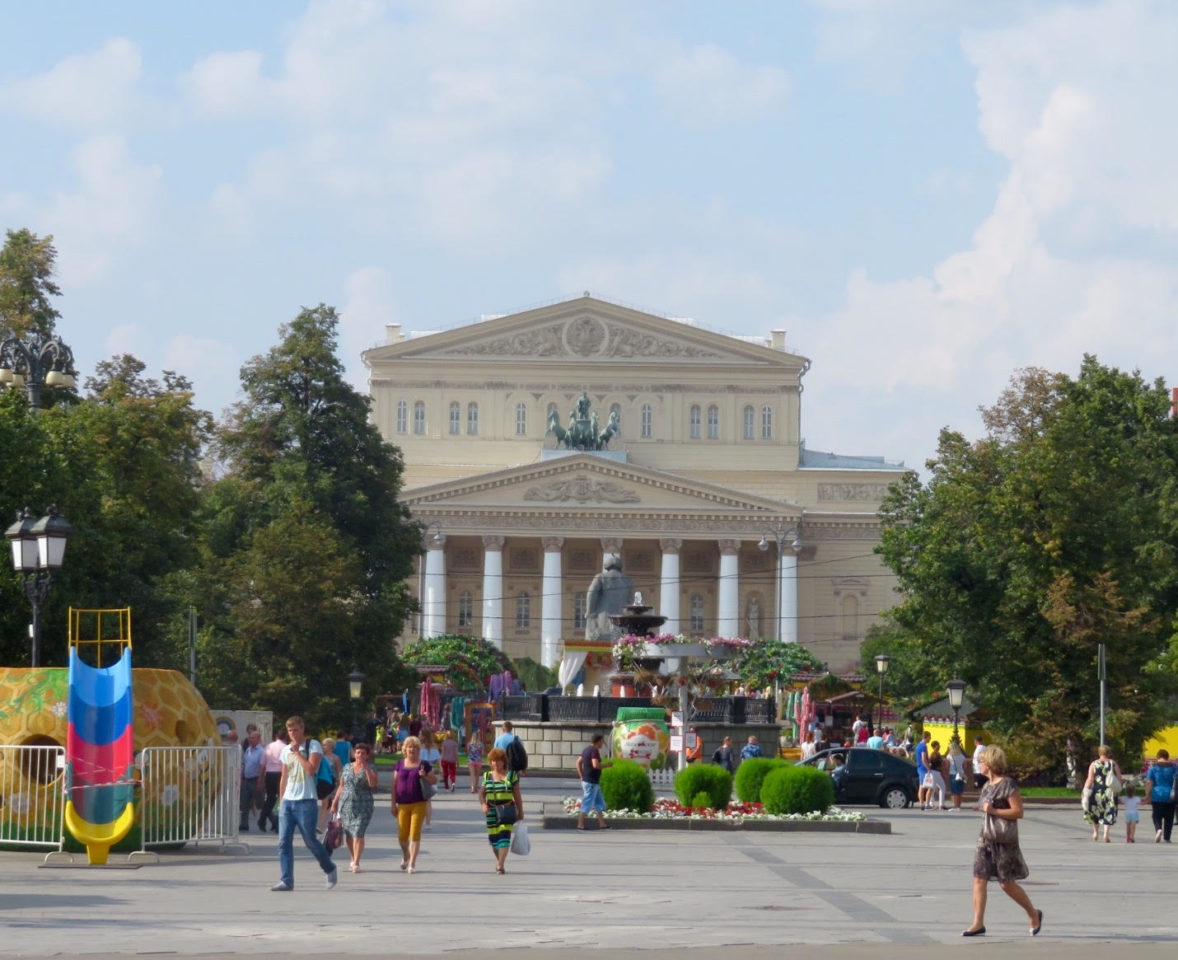 The many reminders of the unimaginable suffering which Russia experienced during the invasions by Napoleon and the French Army in the nineteenth century and by Hitler’s German Army in the twentieth century (when Russia lost 27 million people, more than all the other countries in the world combined) made me better understand and appreciate the proud, resourceful and determined Russian people.

We found the Russian people to be reserved at first but very friendly and warm-hearted once we tried to communicate with them. The Russians we came in contact with, who were involved in some way with the tourist trade, were by and large extremely well educated and very fluent in English. Our total lack of fluency with the Cyrillic alphabet and the Russian language were never a real obstacle to our enjoyment of Moscow, which deserves recognition as a world-class city and one of the best destination cities in Europe.

Stay tuned to BonVoyageurs.com for our writings about other Countries of the World as we share our joie de vivre from around the world. Luxury escapes, cruises and city breaks to Québec City, New York, Washington, Buenos Aires. In Europe and the Mediterranean, places like Paris and Nice in France, Florence, Rome, Napoli and the Amalfi Coast in Italy, Tel Aviv in Israel. In Asia, countries like China, India, Nepal and so much more!