TRAVEL BACK IN TIME WITH ROVOS RAIL IN SOUTH AFRICA FROM THE CAPITAL PRETORIA TO THE COASTAL GEM CITY OF DURBAN
What are you looking for when you start dreaming about your next vacation?  If you yearn for an escape from the 24/7 world of the 21st century, and if you are looking for a relaxing and comfortable way to travel, with all the “modern” conveniences but none of the modern-day disruptions, then come follow me back in time to the “golden age” of luxury rail travel aboard Rovos Rail.
. 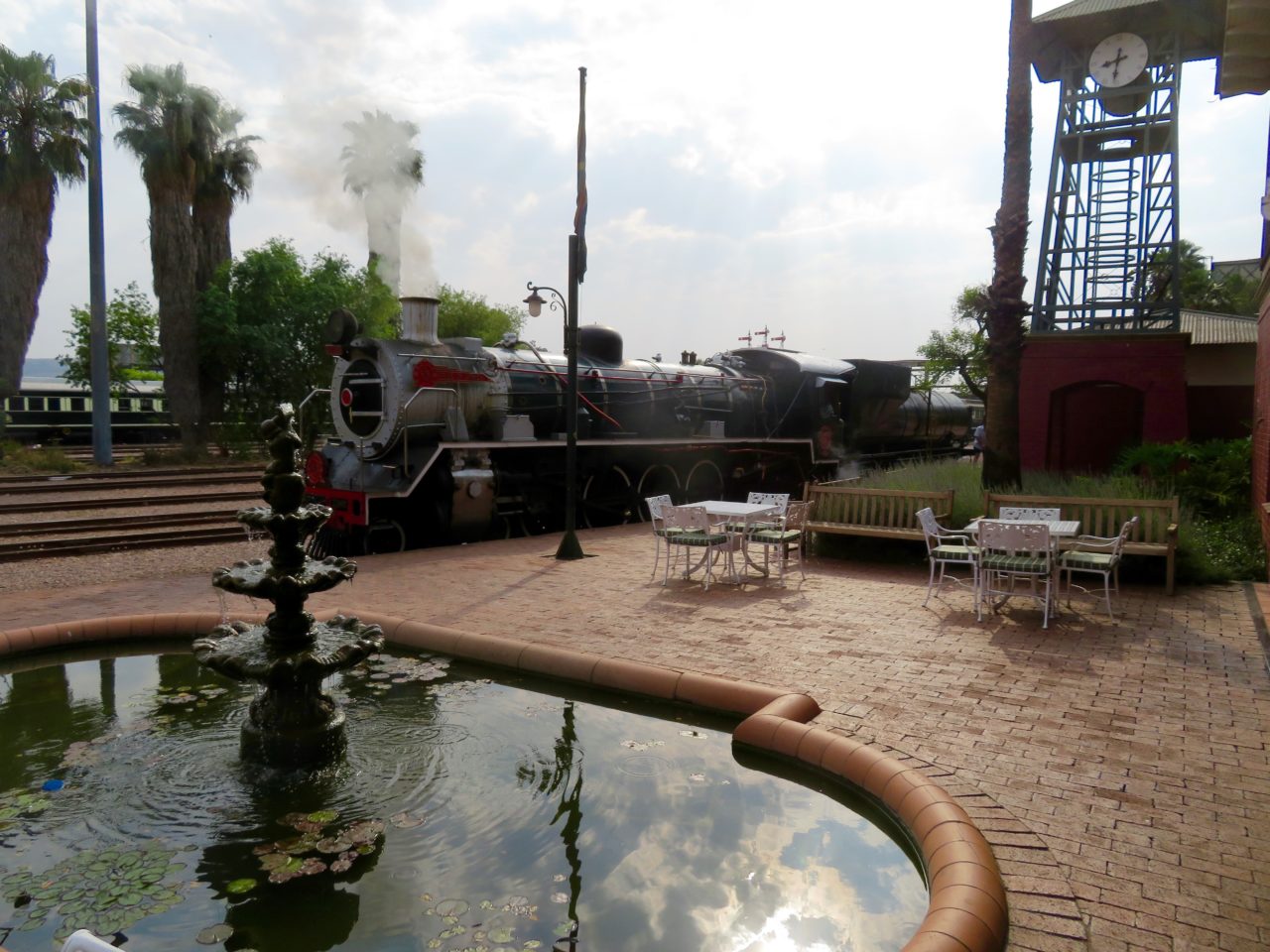 We boarded our expertly restored and magnificently maintained Pride of Africa Rovos Rail train in South Africa’s capital city of Pretoria.  The Pride of Africa is hailed as the most luxurious train in the world! 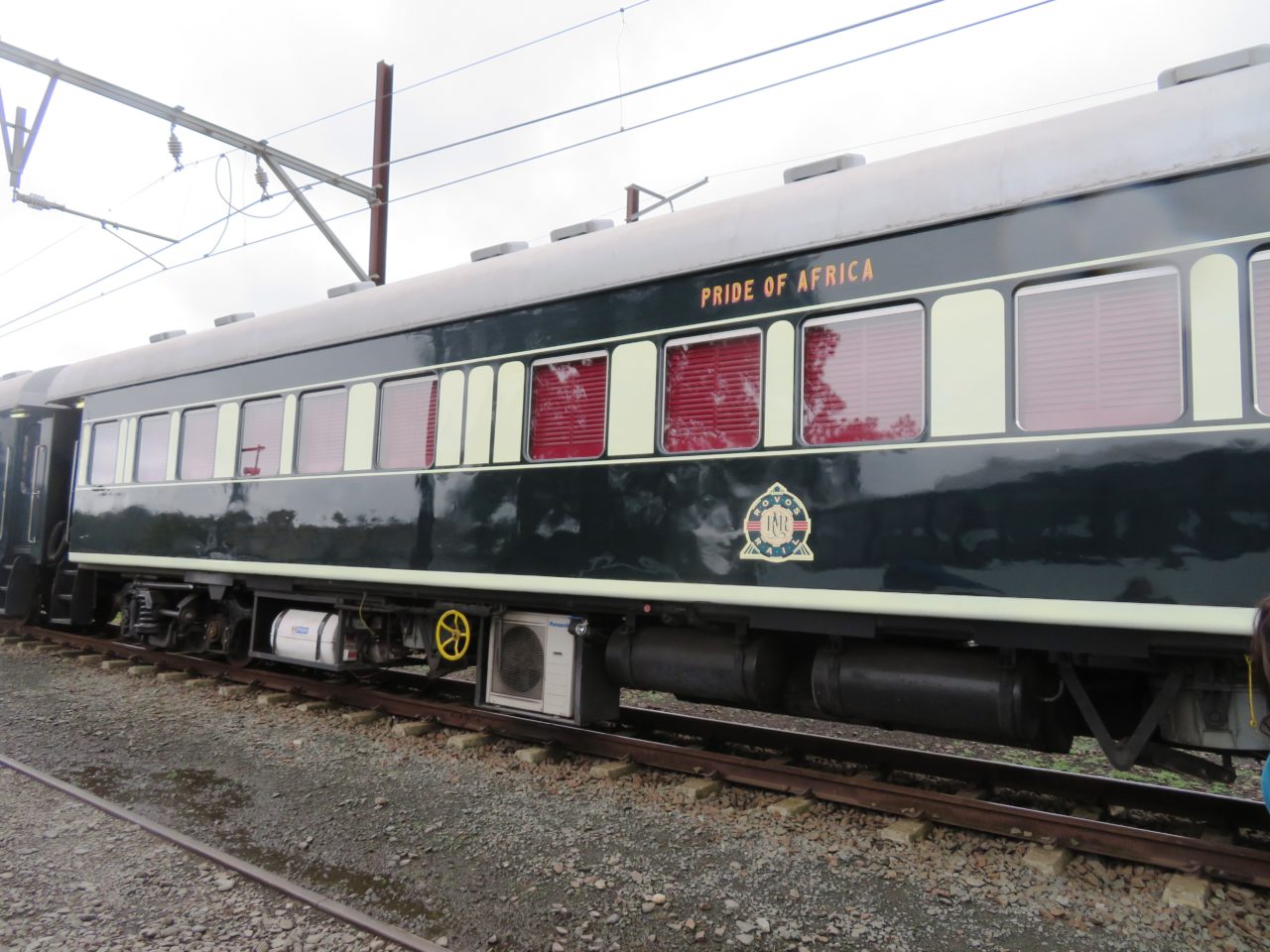 The Rovos Rail Pride of Africa train is hailed as the most luxurious train in the world!

The welcome at the Rovos Rail station almost felt like an enchanting scene out of Masterpiece Theatre.
. 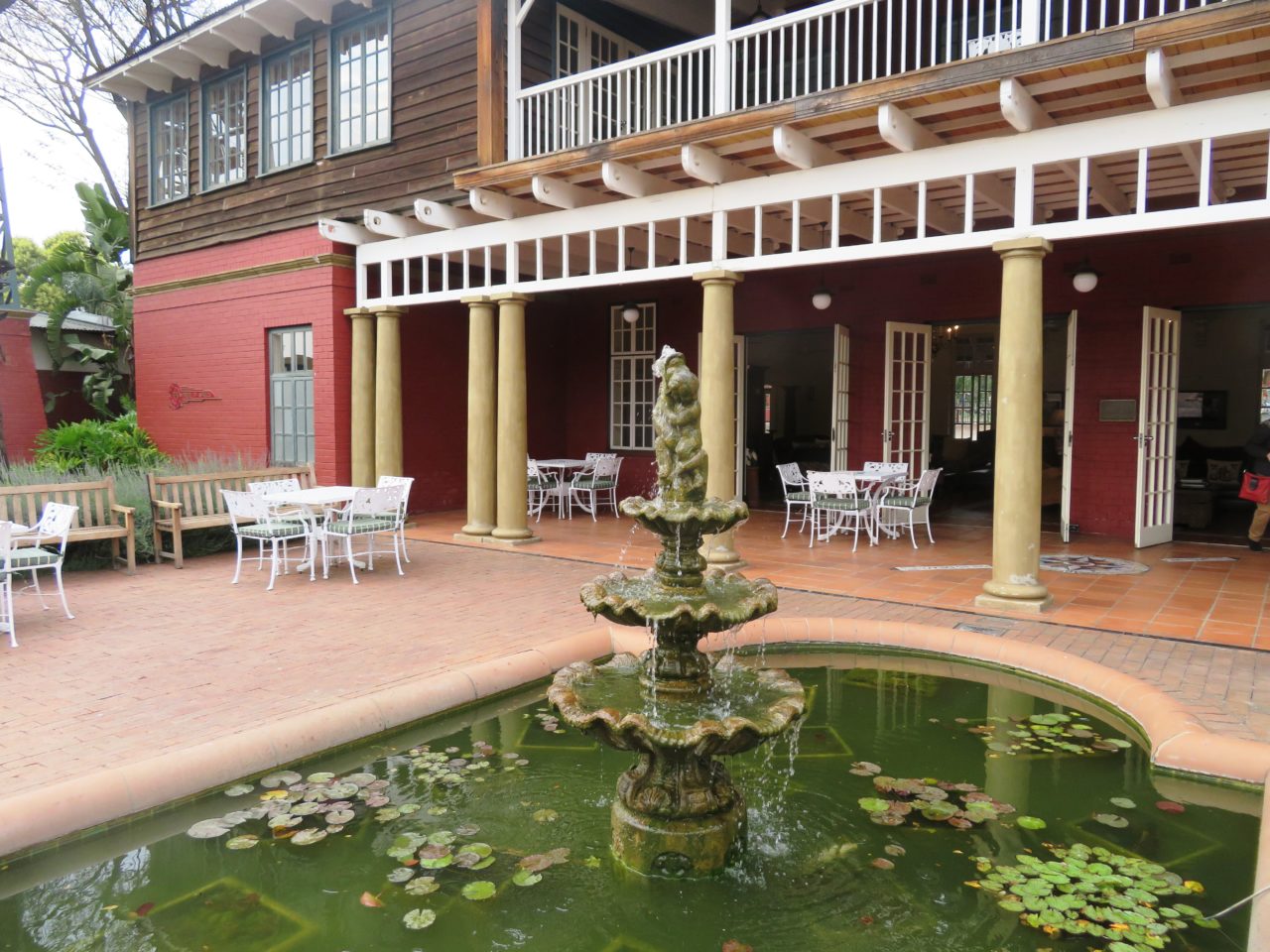 Upon our arrival at 8:30am, we were greeted by uniformed hostesses with champagne flutes filled with our choice of champagne or juice, and then ushered into an enormous reception hall handsomely decorated in the English manor house tradition with comfy over-stuffed sofas and chairs and wood-paneled walls.
. 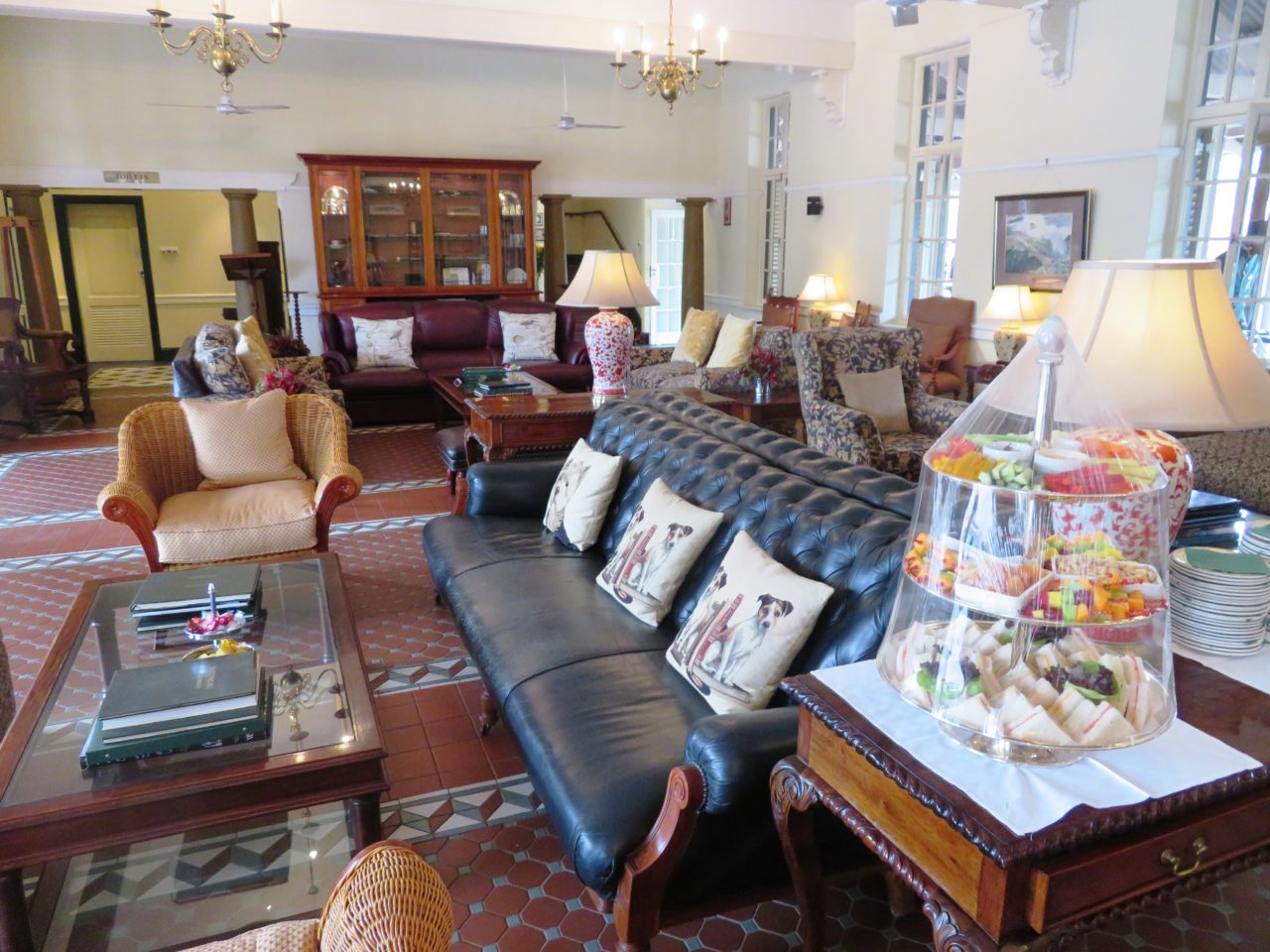 While we waited for the 30 or so other passengers to arrive, we were greeted not just by Rohan Vos, the founder and owner of Rovos Rail, but also by his charming daughter, Brenda. To our surprise, we also were welcomed by some baby chickens and the proud rooster himself who posed for a picture.  After all — this was Africa where animals play a very important role in the country (!)
. 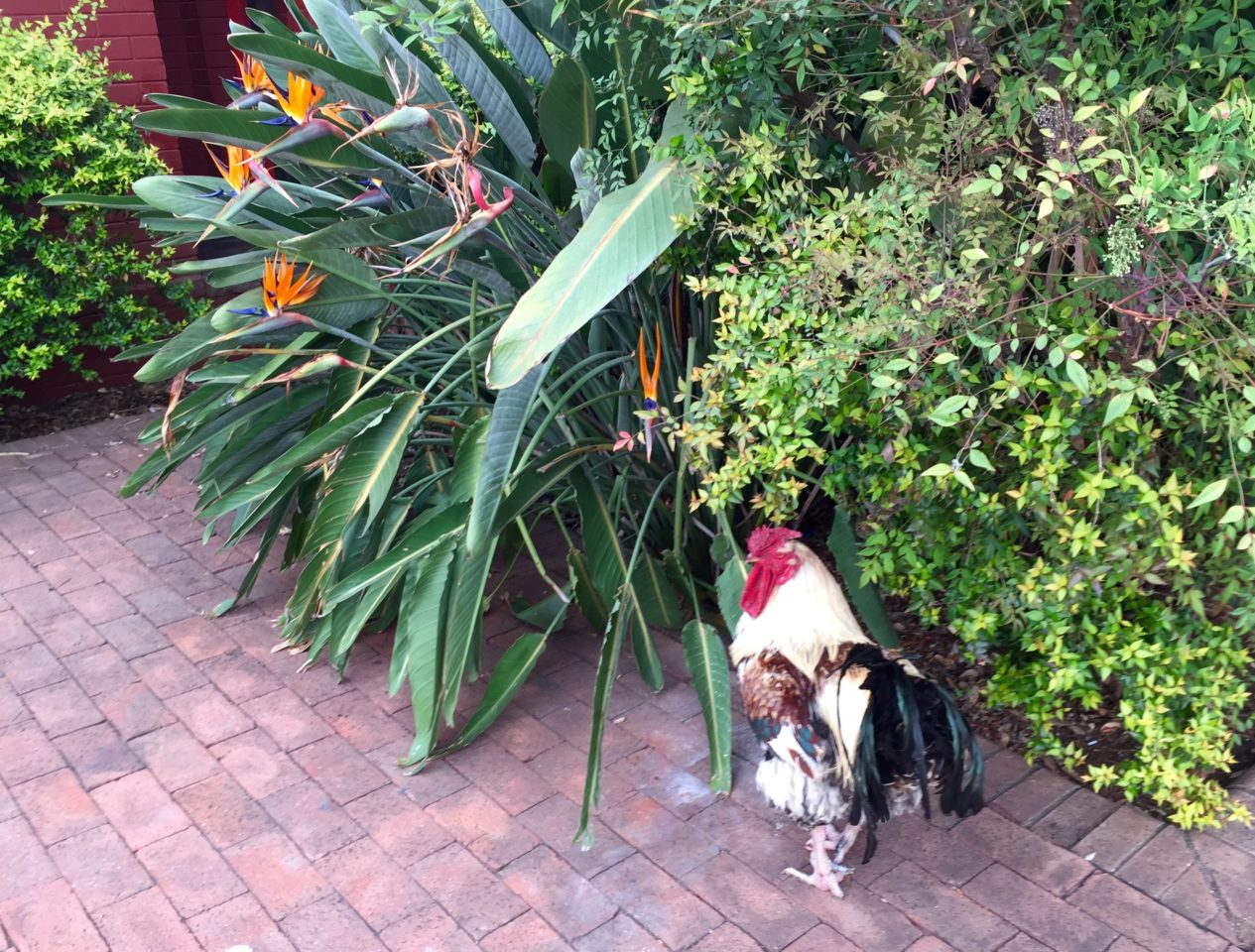 Meanwhile we were offered an impressive selection of assorted tea sandwiches and biscuits as well as some of the best gourmet potato chips I’ve every eaten — if you have the opportunity, do try “rootstock” handmade potato crisps from Stellenbosch (rootstockoriginals.com)!  After the most impressive service and greetings, just tasting those deliciously fresh crisps as I sipped the well-chilled champagne made me keenly aware that I was in for a journey that would be simply top-notch.
. 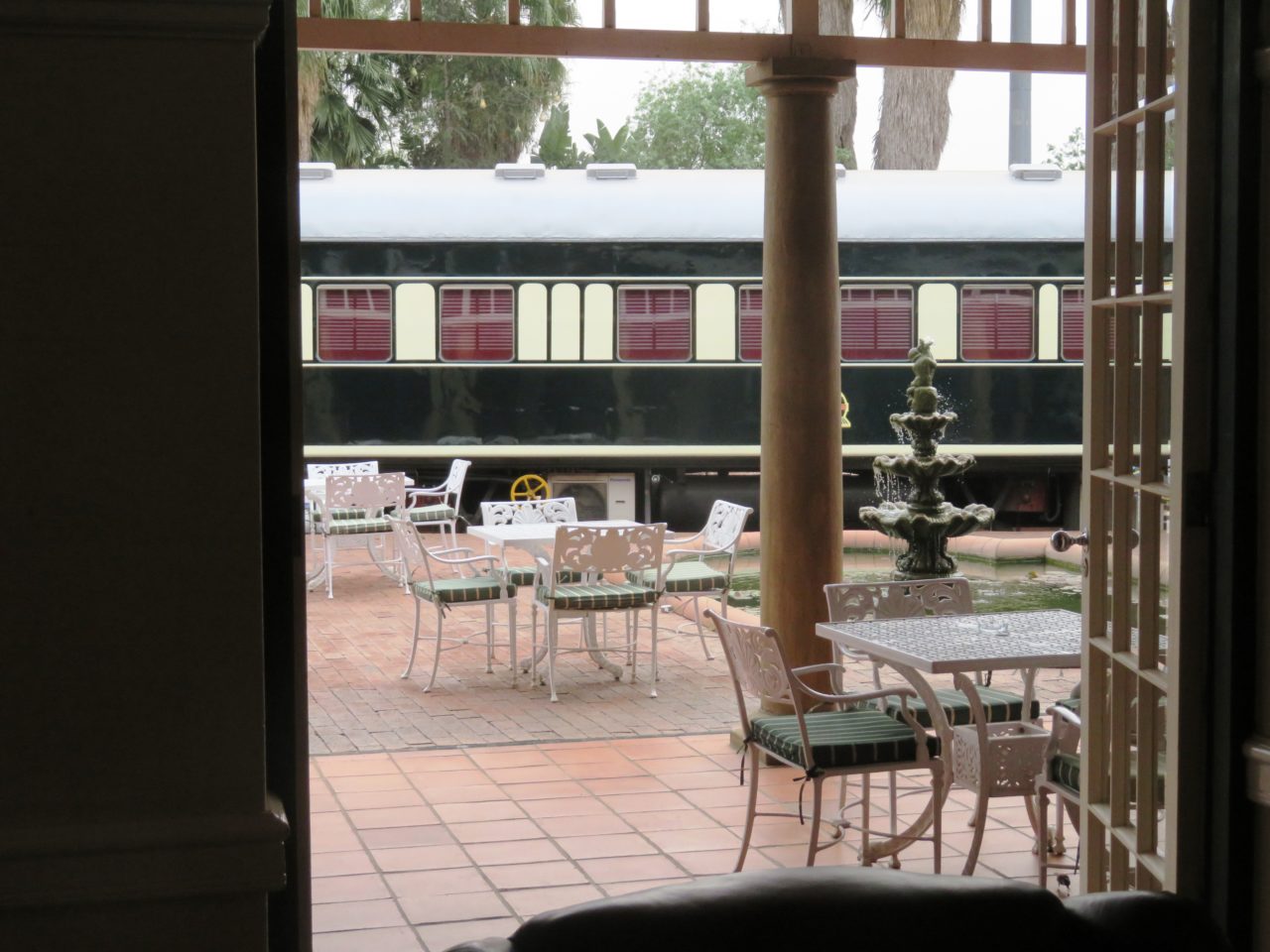 Waiting to board the Pride of Africa train at the Rovos Rail station in Pretoria, South Africa

We boarded the train around 10am after all the 30 or so passengers had arrived for our 3-day trip down from the 4400 foot altitude of Pretoria through the hills, towns and countryside to the charming coastal city of Durban.  As soon as we were escorted to our rooms where we found our luggage waiting for us, a charming young lady appeared to introduce herself as Monique, our “hostess” for the trip. 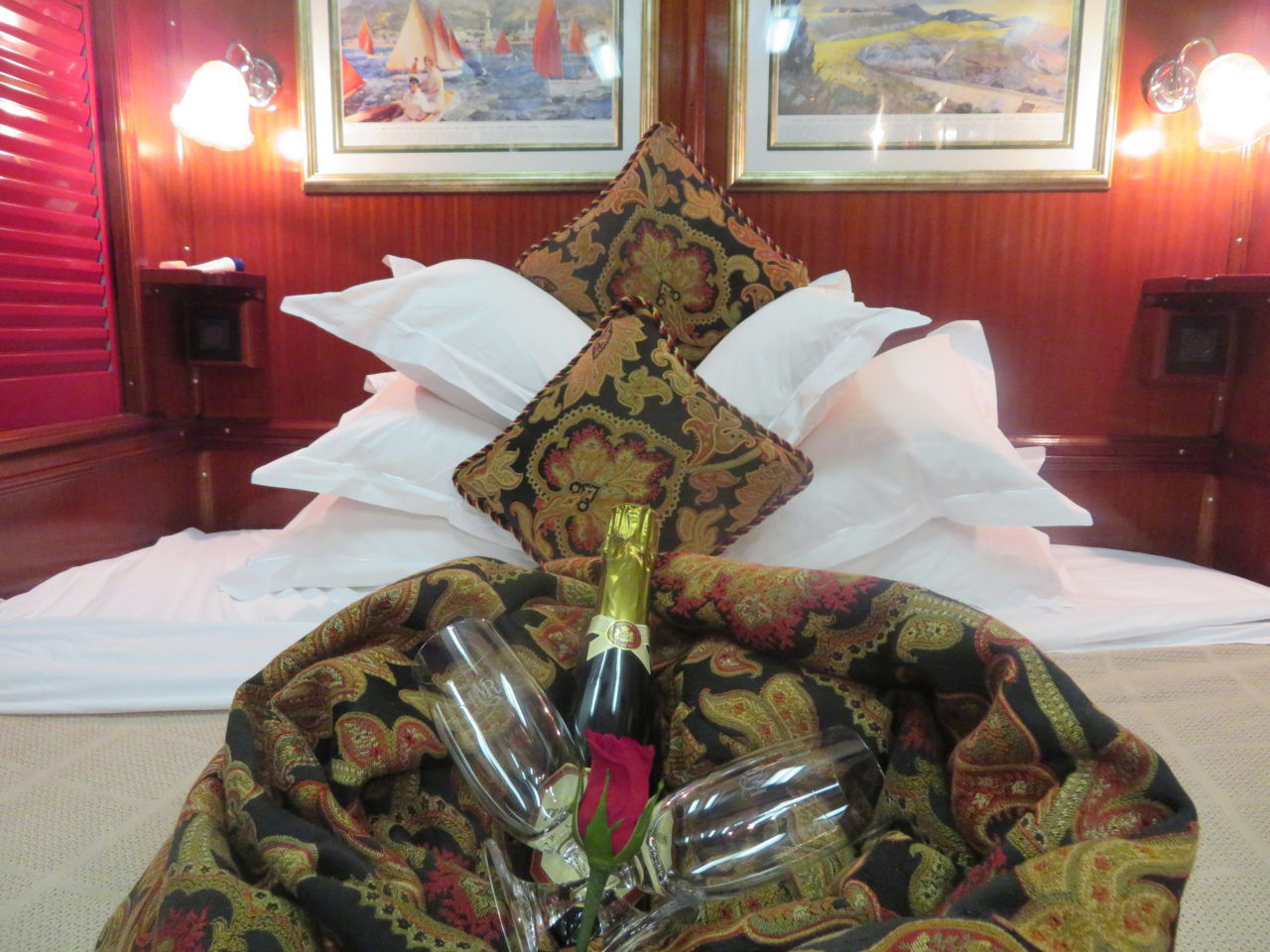 The king size bed in our deluxe suite aboard Rovos Rail

She explained the nature of life onboard Rovos Rail and introduced us to the facilities of our Deluxe Suite which offered all the amenities of a first-class hotel room including the individual HVAC control, rapid electric heating unit for our bathroom, refrigerator and tea and coffee makers, hairdryer, robes & slippers, ample closet storage, laundry bags for any laundry we needed to have done and even bags for an overnight shoe shine.  Most impressive was the fact that we could use our phone to call Monique for anything we needed whenever we needed it.  Definitely first-class service and undoubtedly with the signature of Rohan Vos.
. 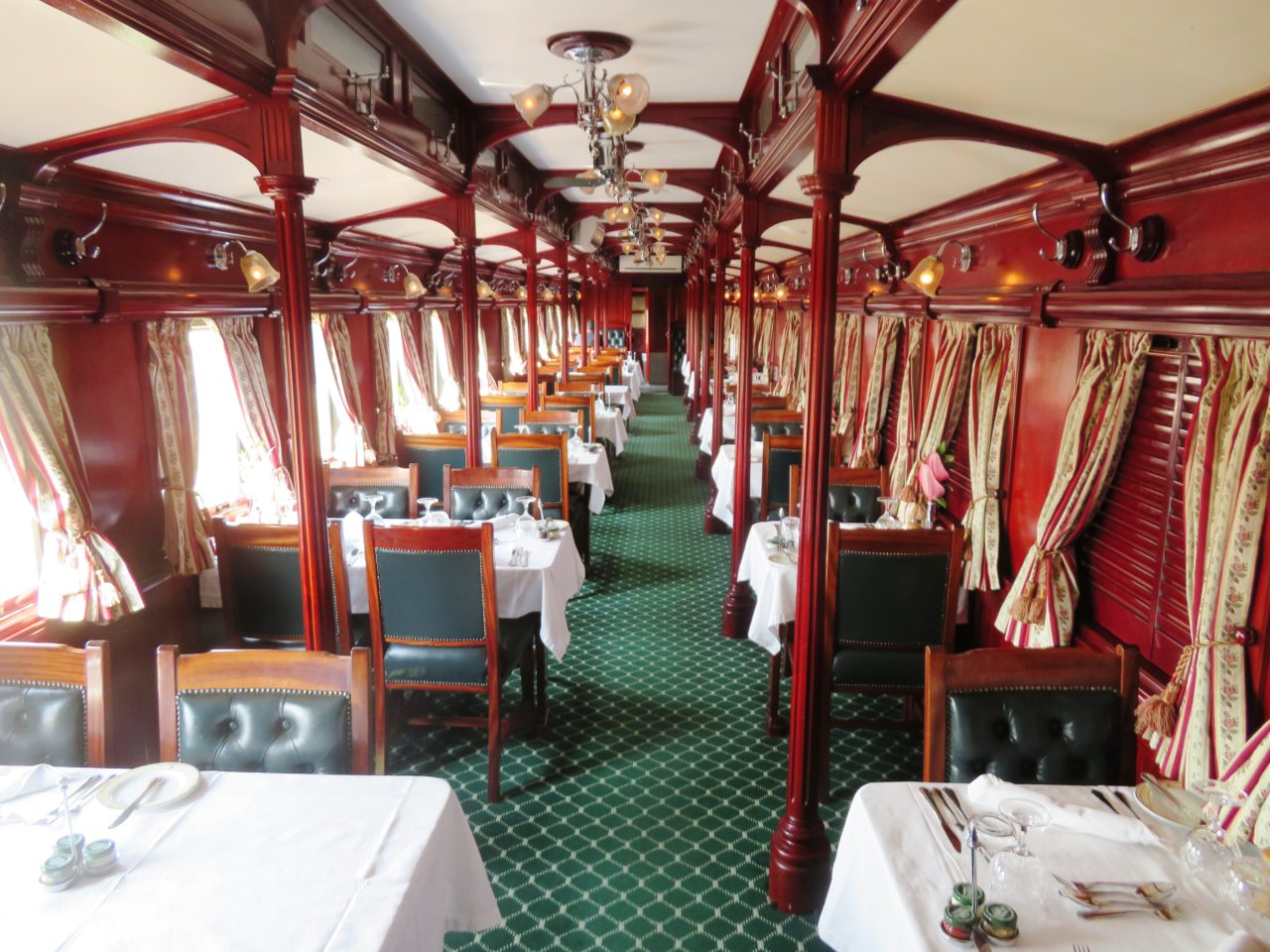 The dining car aboard Rovos Rail

Monique also explained that the elegant dining car, which served three superb meals per day, was just the next car down, while the lounge and fully stocked bar with a Barman on duty was open from mid-morning to late in the evening.
. 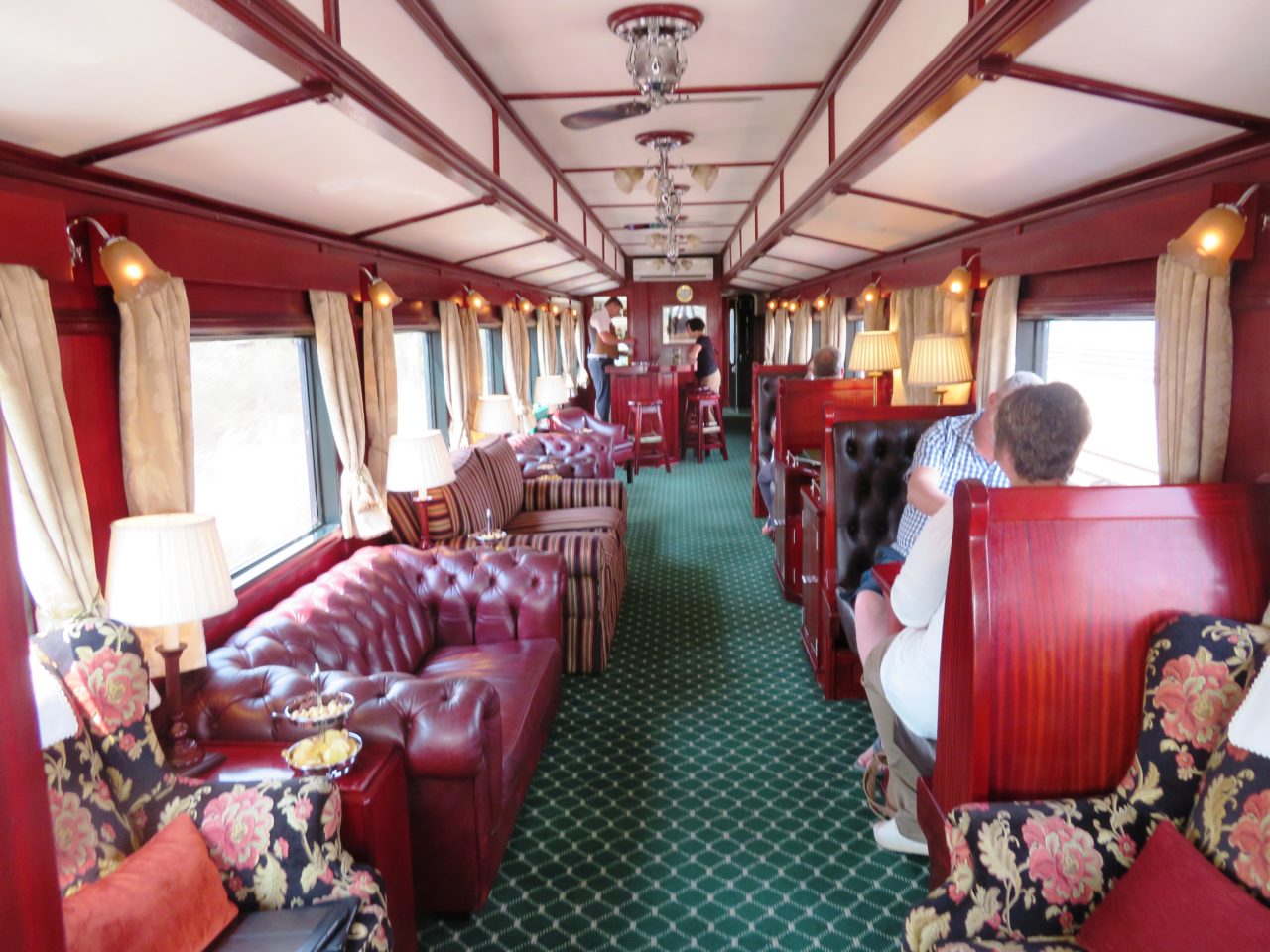 The lounge car aboard Rovos Rail

The lounge was also where Afternoon Tea was served daily …as if we didn’t have enough to eat with a fully cooked breakfast and a 3-course lunch and a 3- or 4-course dinner daily!
. 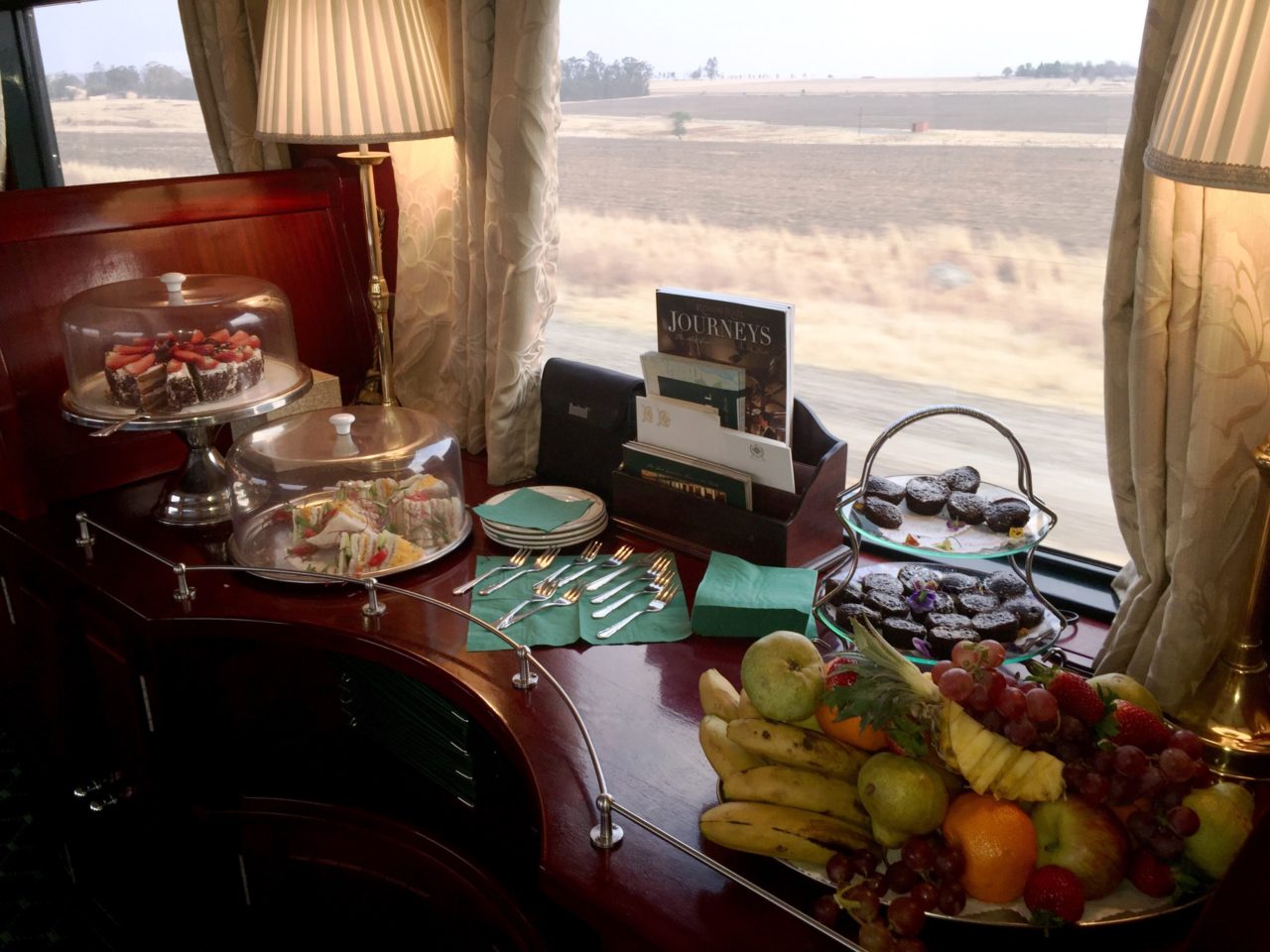 Tea Time in the lounge car aboard Rovos Rail

Thankfully, I quickly learned to order “half-portions” and managed to navigate the challenges of “gourmet” meals.  Of course, our friendly and expert sommelier came to visit us before each course to explain the wine pairing he recommended for the menu du jour.  Impressive indeed was the fact that each and every wine, from the dry whites to the robust reds to the sweet dessert wines was from a South African winery.
. 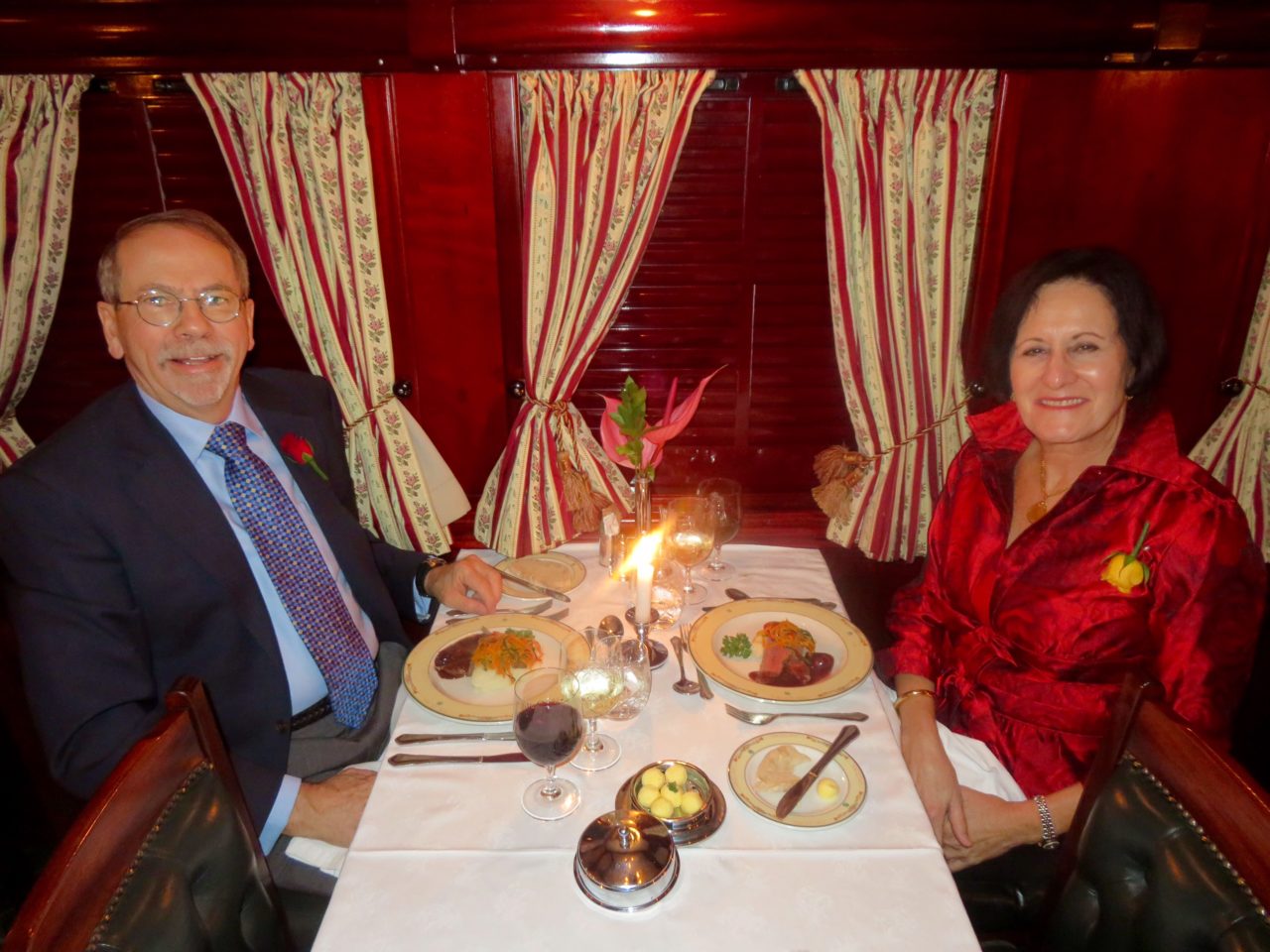 Of particular relevance to the “golden age” theme of Rovos Rail, Monique reminded us that we were expected to “dress” for dinner — tie and jacket for the gentlemen and a similar elegance for the ladies.  A perfect compromise from the “golden era” of tux & evening gown, don’t you think?
. 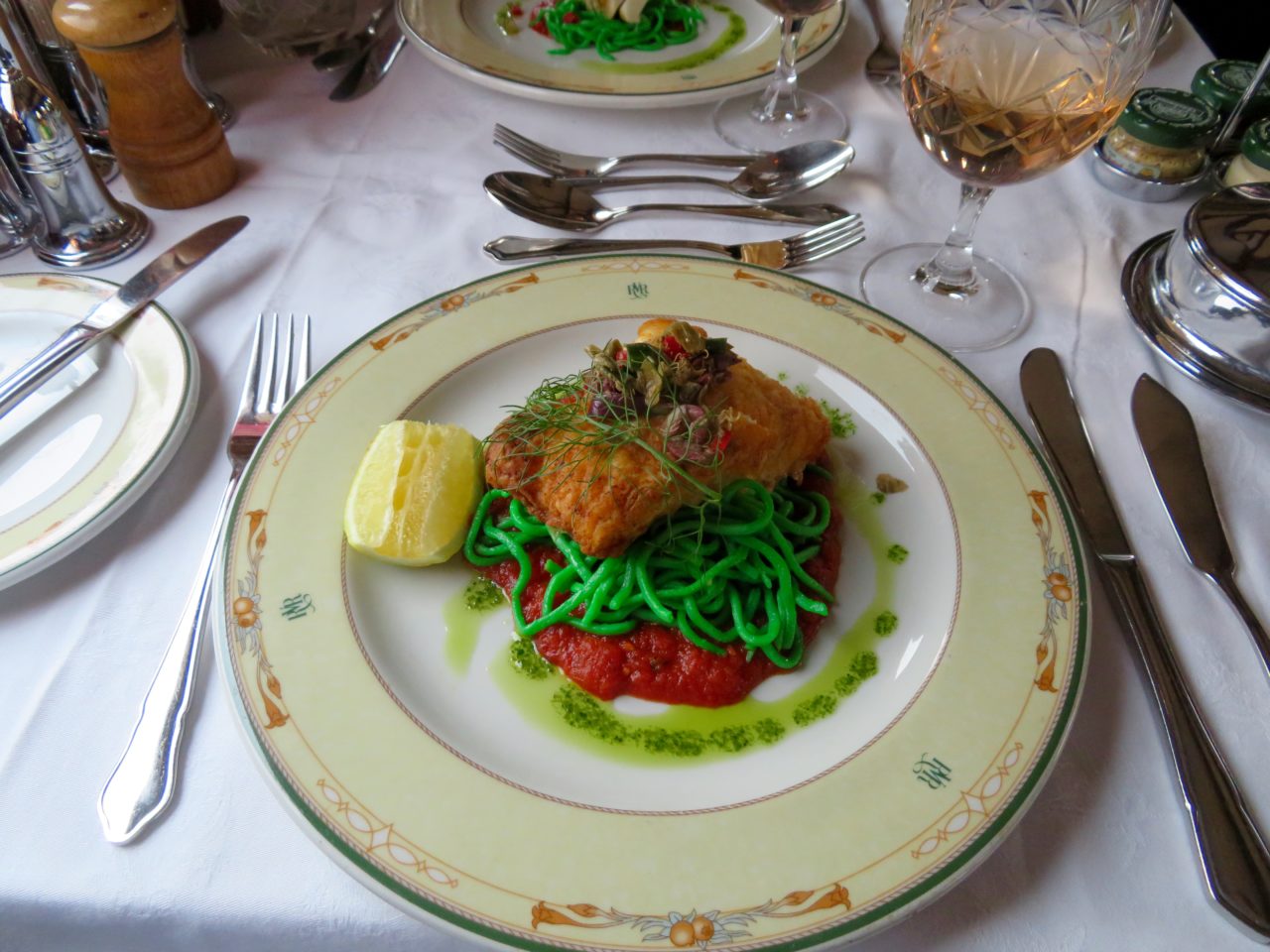 Similarly, there was no television in our room and we were asked to please leave our electronic devices in our rooms when we went into the public spaces on the train.  No phone calls, no emails, no surfing the net.
. 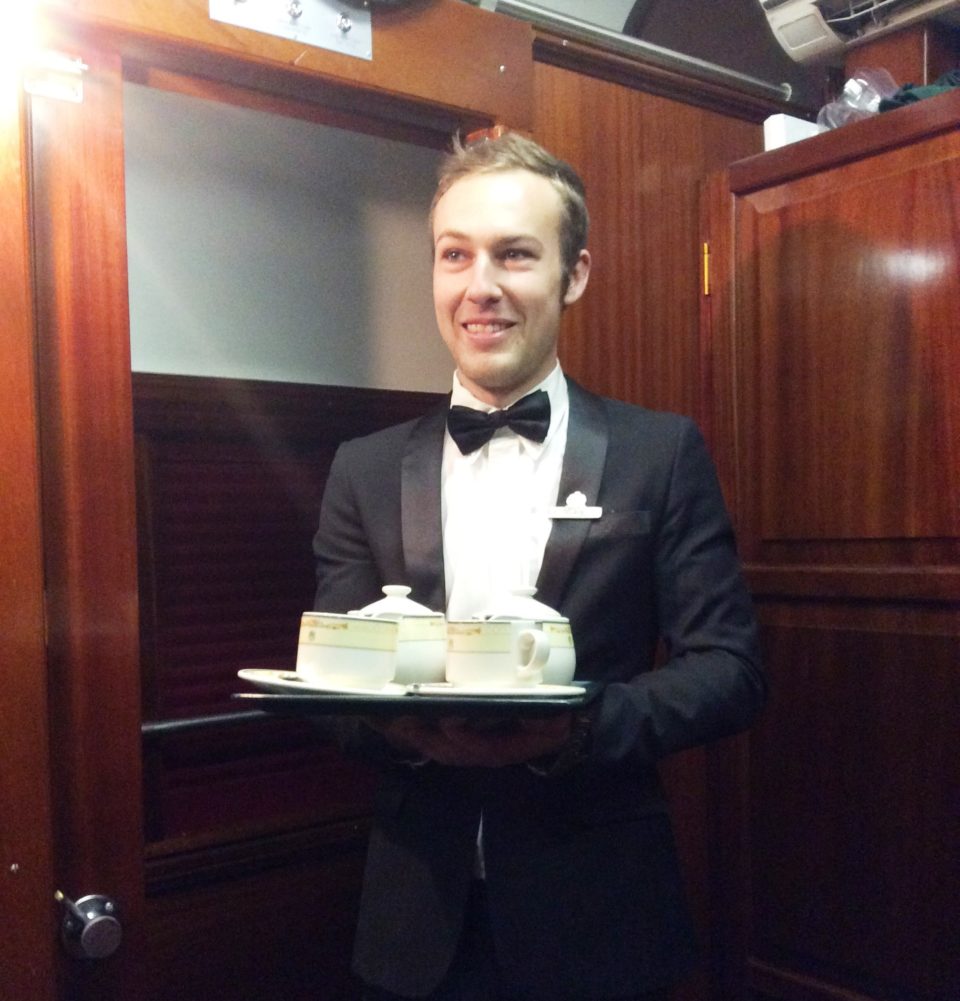 How does one disconnect from one’s devices?  Simple – by refocusing on the lost art of conversation.  Books were permitted in the lounge, but once again – no electronics.  Of course, one of the primary reasons you take a journey with Rovos Rail is to decompress and de-stress, to take time to smell the roses again, to sit by the window and watch the world pass by — and most certainly, to enjoy the journey with your partner.  Not so difficult to do when the waiters, the hostesses and the Barman are attending to your every need.
. 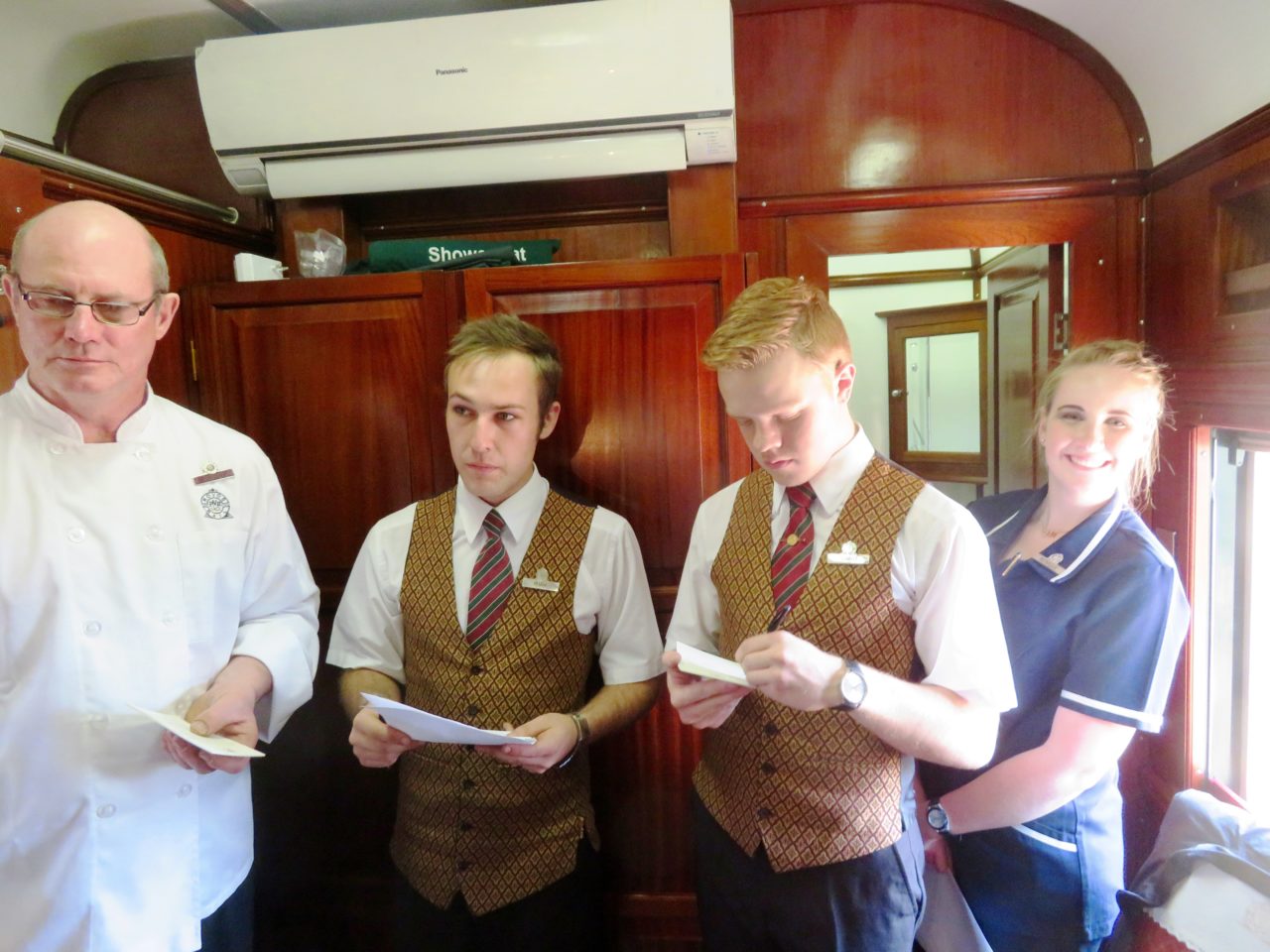 After our Hostess Monique departed, there was another tap at the door.  The Chef appeared with his two top assistants.  On a mission to ensure that we enjoyed the culinary part of our journey with Rovos Rail, the Chef reviewed our dining preferences with us and then discussed the nature of what we could expect for each meal, our choices of wines from the sommelier and so on.  Very impressive, and so was his attention throughout the journey to our particular food preferences.
. 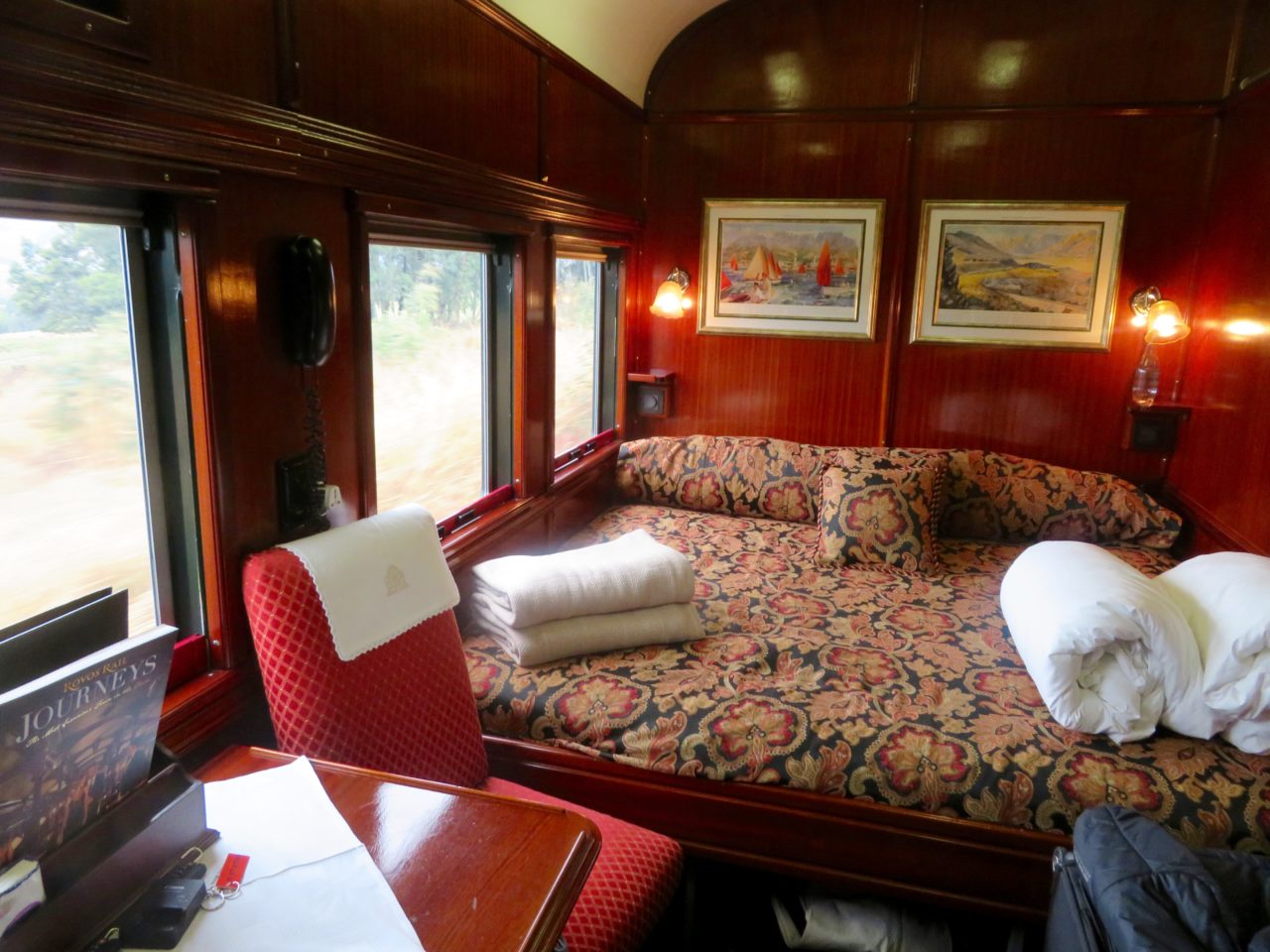 Part of our deluxe suite aboard Rovos Rail

Just a few hours later at lunch, my husband Denis received his hummus for the appetizer course without coriander and I was offer a fresh fruit platter in lieu of the cheese platter.  At each meal we received a menu with an impressive list of choices, and the charming young waiters took great pride in attending to our every need.
. 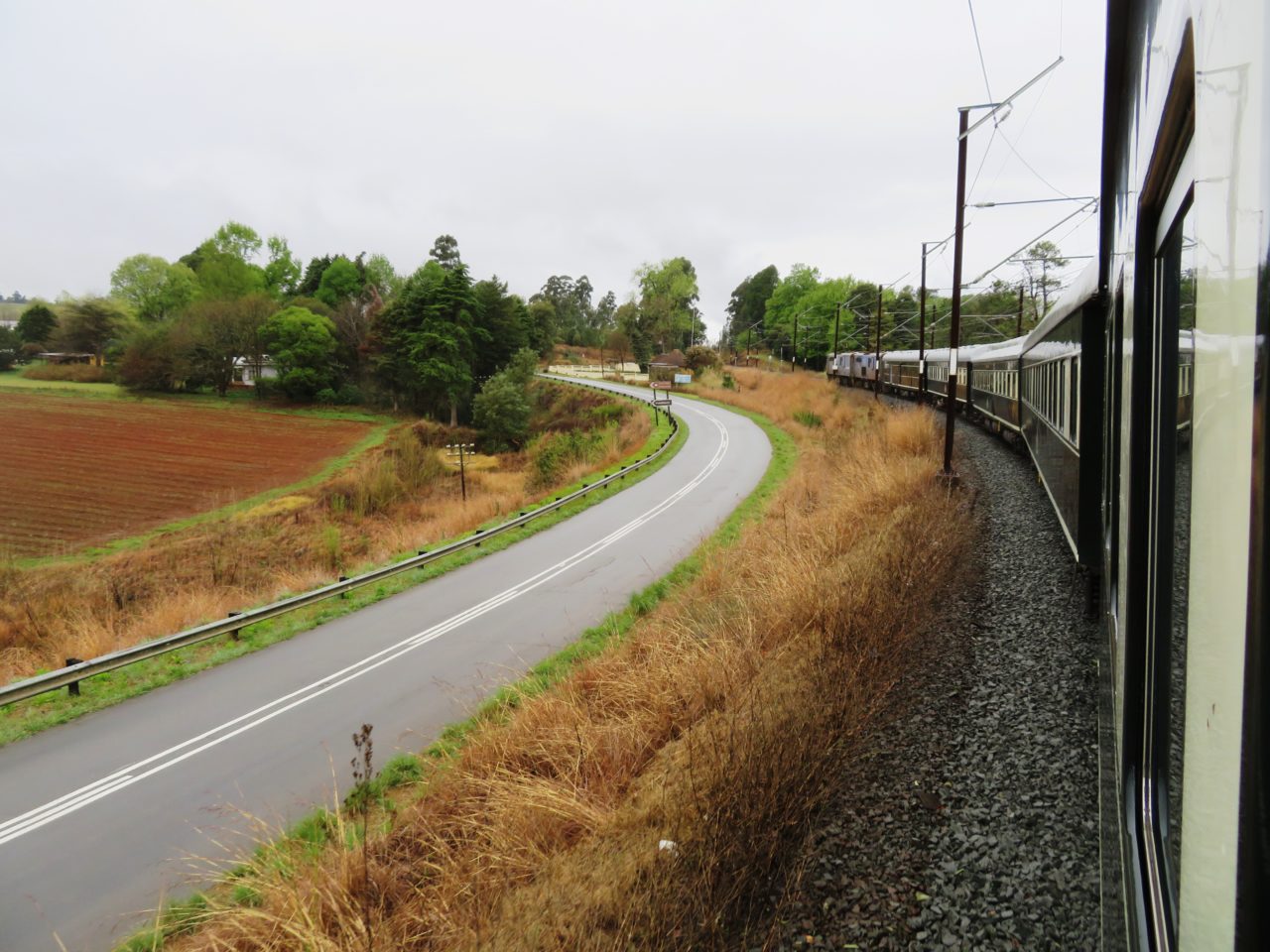 The staff on board Rovos Rail clearly proved to us that the art of old world service is alive and well.  Even though the rains came and dampened our Safari excursion, they were well prepared with top quality full-body waterproof ponchos that also served as windbreakers.  And, of course, we we were welcomed back on board with champagne or a fine glass of port.
. 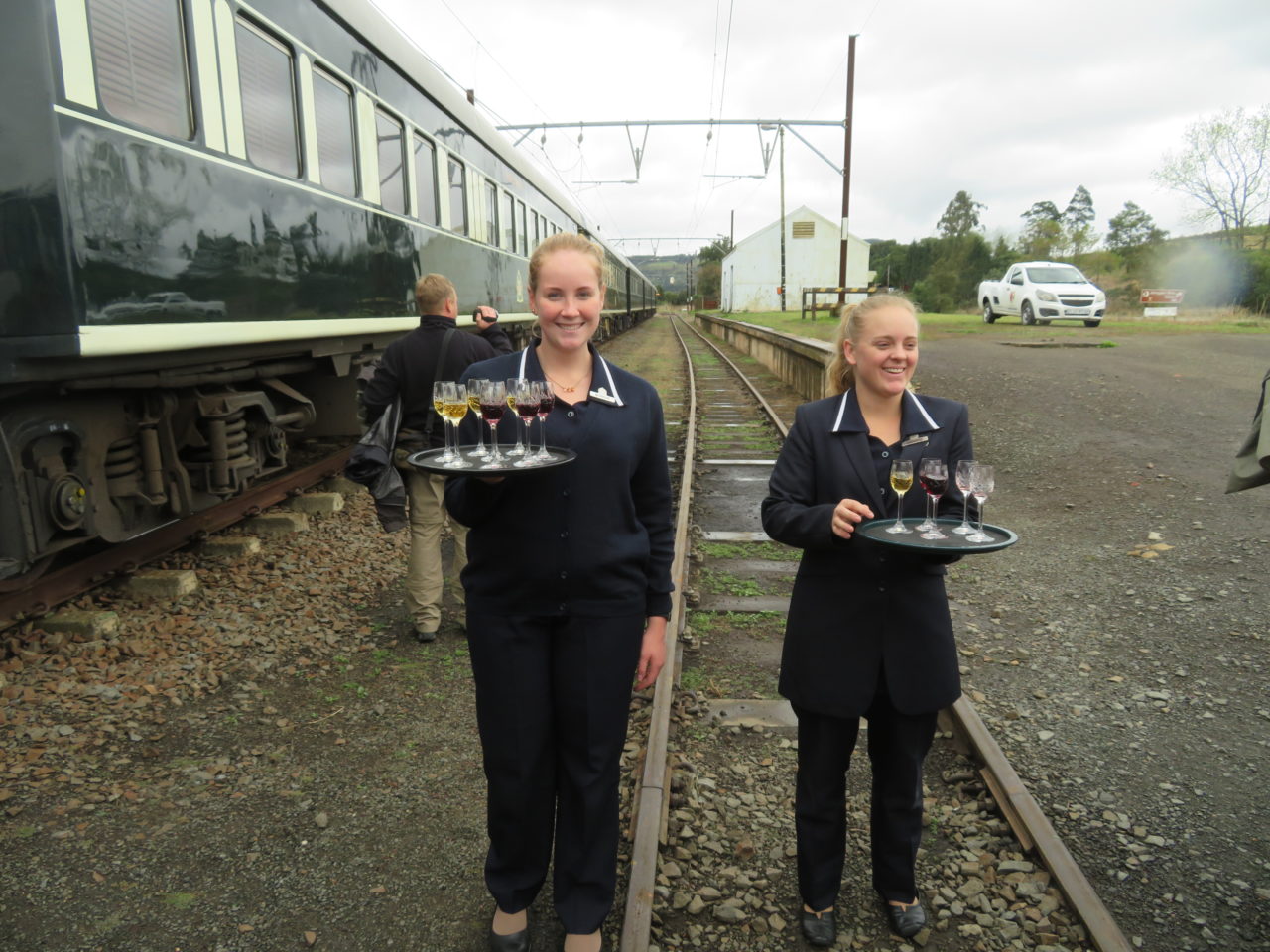 Rovos offers a number of different train journeys.  While each offers its own set of excursions and experiences, each is designed to take you back in time to the “golden age” of luxury train travel where you are pampered and invited to escape the stresses of the 24/7 modern world. Traveling with Rovos Rail is truly one of S. Africa’s most original experiences.
. 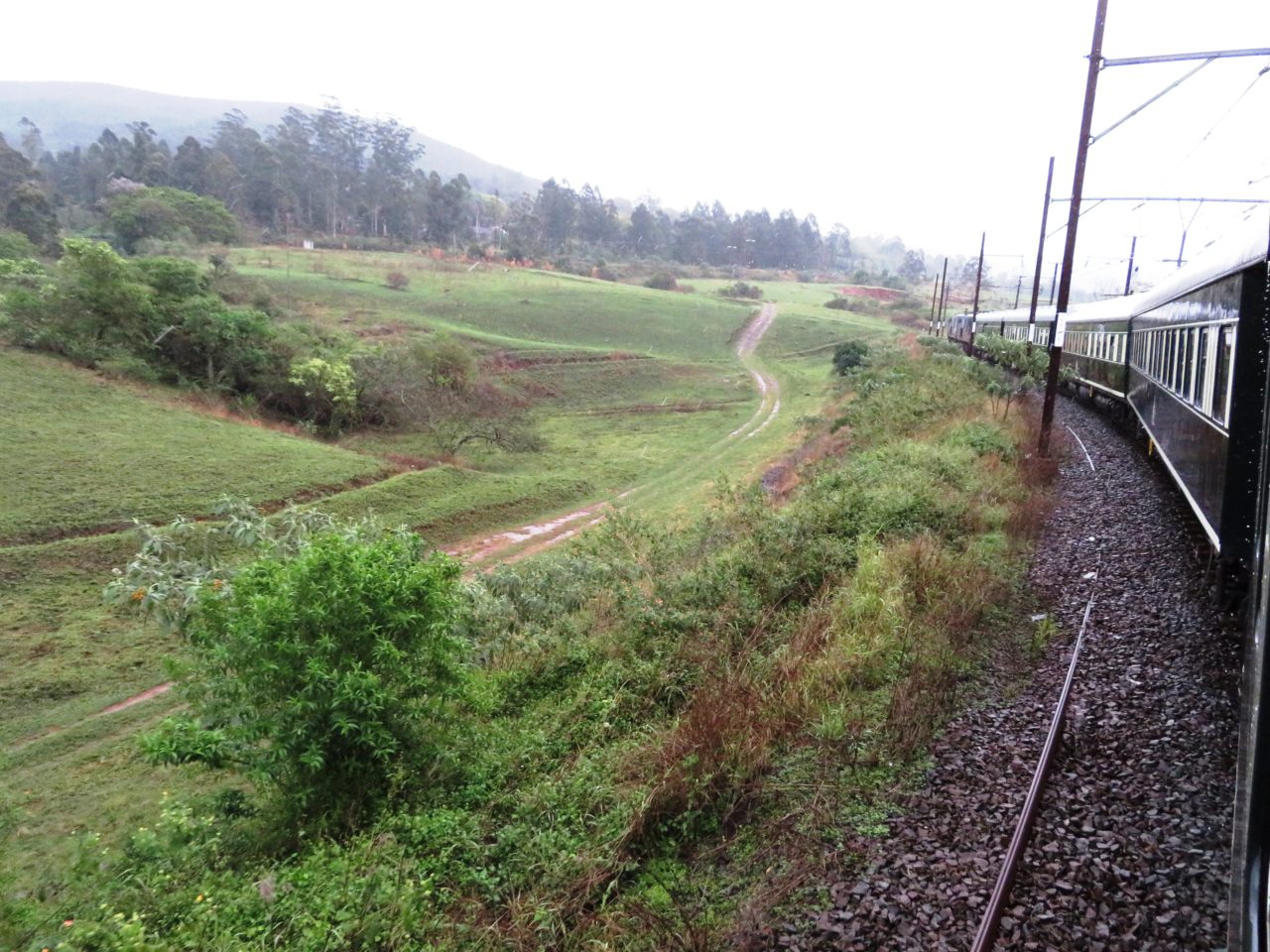 Stay tuned to BonVoyageurs.com for our writings about other Countries of the World as we share our joie de vivre from around the world. Luxury escapes, cruises and city breaks to Québec City, New York, Washington, Buenos Aires. In Europe and the Mediterranean, places like Paris and Nice in France, Florence, Rome, Napoli and the Amalfi Coast in Italy, Tel Aviv and Jerusalem in Israel. In Asia, countries like China, India, Nepal and so much more!
« Fairlawns Hotel in Johannesburg ~ Ideal Gateway to South Africa
Delaire Graff Indochine in Stellenbosch South Africa »