Cape Peninsula, The Most Scenic Drive in the World 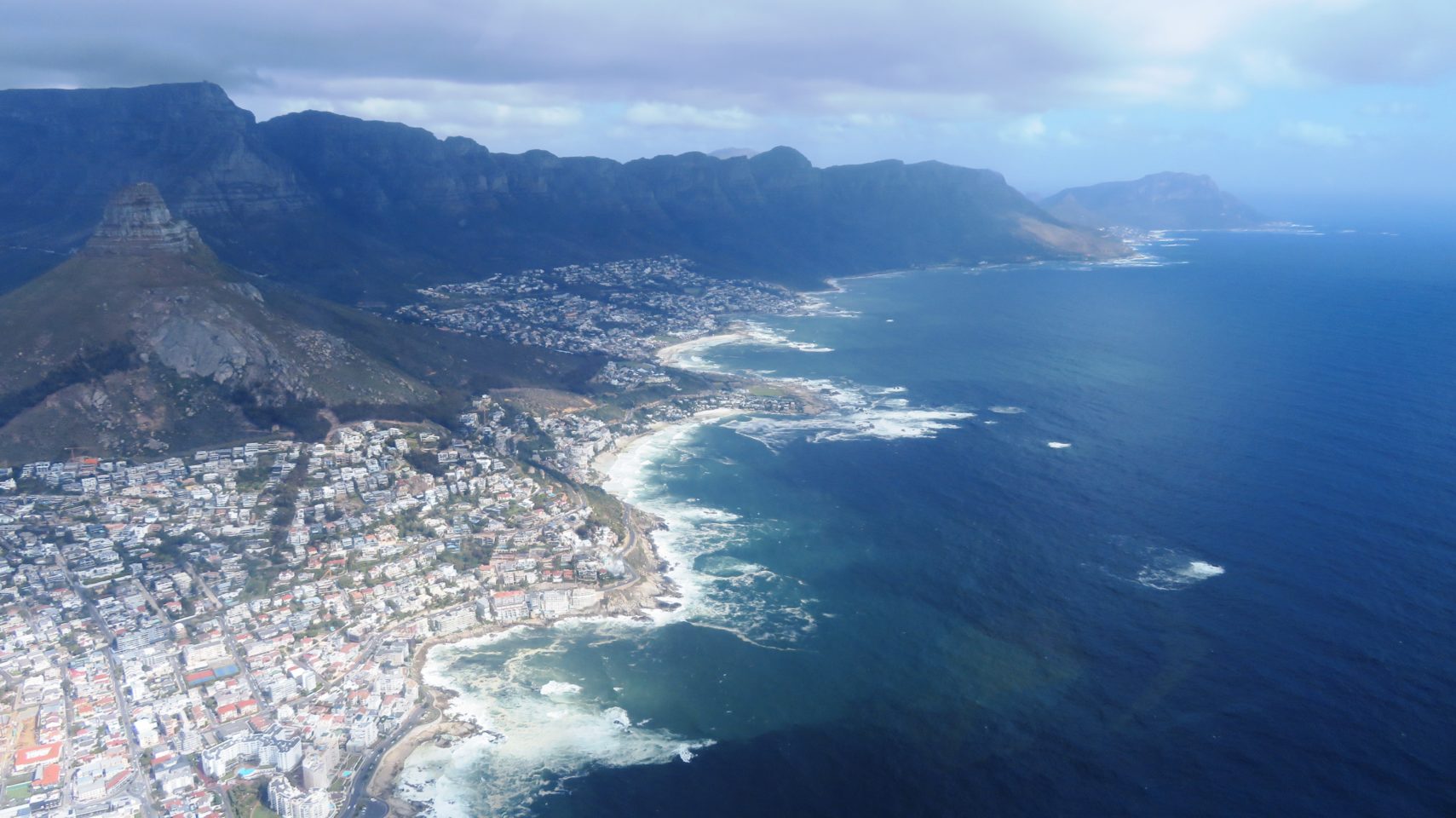 Cape Peninsula in the Cape Town region of South Africa

Our three-week visit to South Africa ended on a high-note … literally!  On a clear, sunny afternoon we enjoyed a narrated helicopter flip from Cape Town over the gorgeous Victoria & Alfred Waterfront, nature’s awesome Table Mountain, the upscale coastal suburbs of Green Point and Sea Point, the magnificent beaches of Clifton and Camps Bay, and finally the majestic Twelve Apostles Mountain Range before returning to our landing pad. 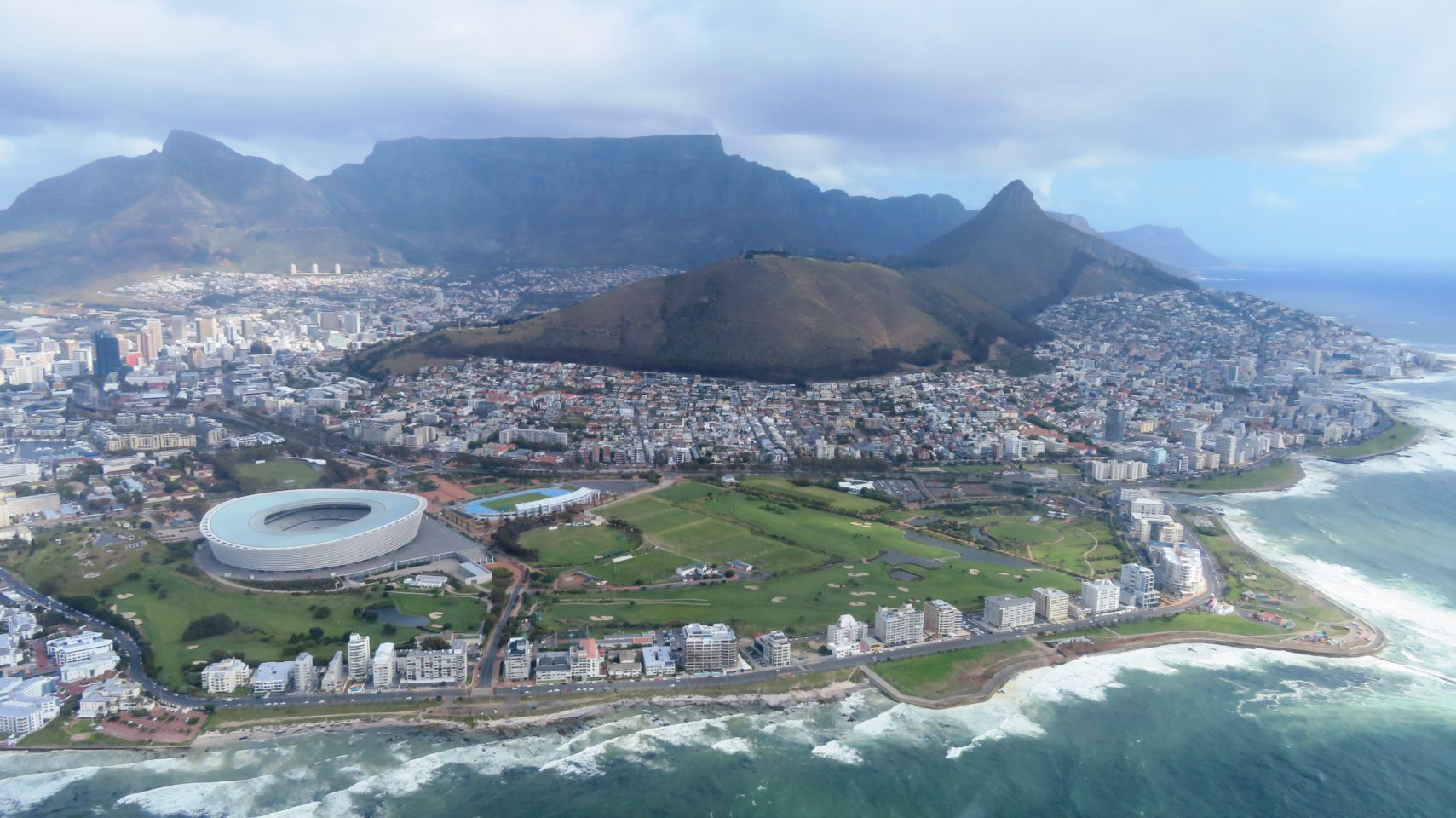 What an awesome and unforgettable introduction to the sights and spectacular beauty of the region.  Thank you, NAC Helicopters of Cape Town!  Plus, the helicopter flip was the perfect prelude to our nine-hour car and driver tour around the Cape Peninsula, i.e. down the Atlantic coast from Cape Town to the renowned Chapman’s Peak, then on to the Cape of Good Hope at the tip of Cape Peninsula, and back towards Cape Town up the coast along False Bay. 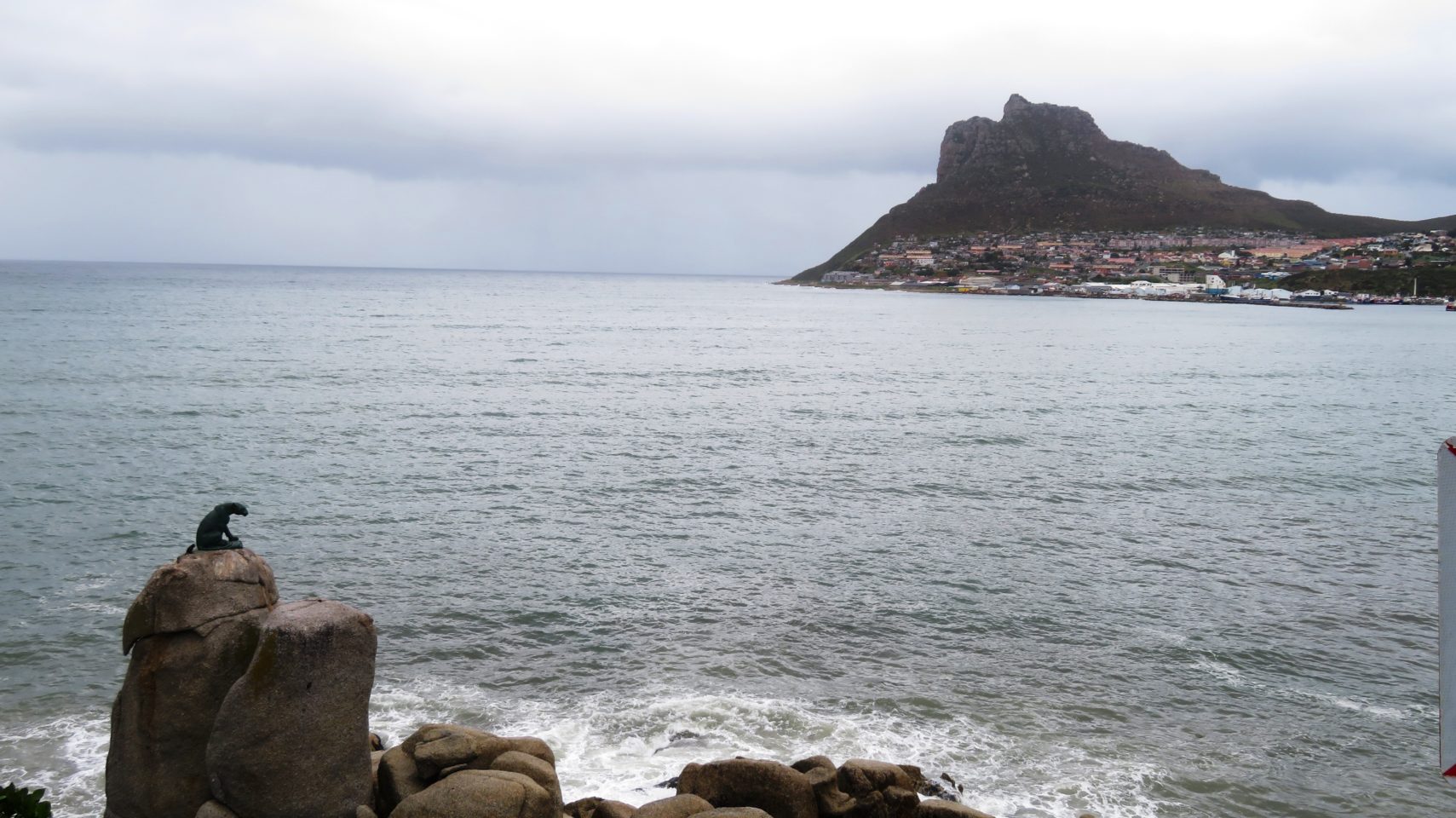 I believe the first official reference to the striking natural beauty of this coastal region was noted in 1580 by Sir Francis Drake during his famous voyage around the world. As he sailed into Cape Town’s Table Bay, he recorded in his journal for posterity that the Cape Peninsula was “the fairest Cape we saw in the whole circumference of the earth”.  While I can’t claim to have seen as many of the world’s coastal regions as Drake, I can share that when Denis turned to me towards the end of the tour and said “this is the most beautiful scenic coastal drive I’ve ever seen, better than the Amalfi Coast in Italy or the Grand Corniche in France”, I was in the midst of the same reverie. 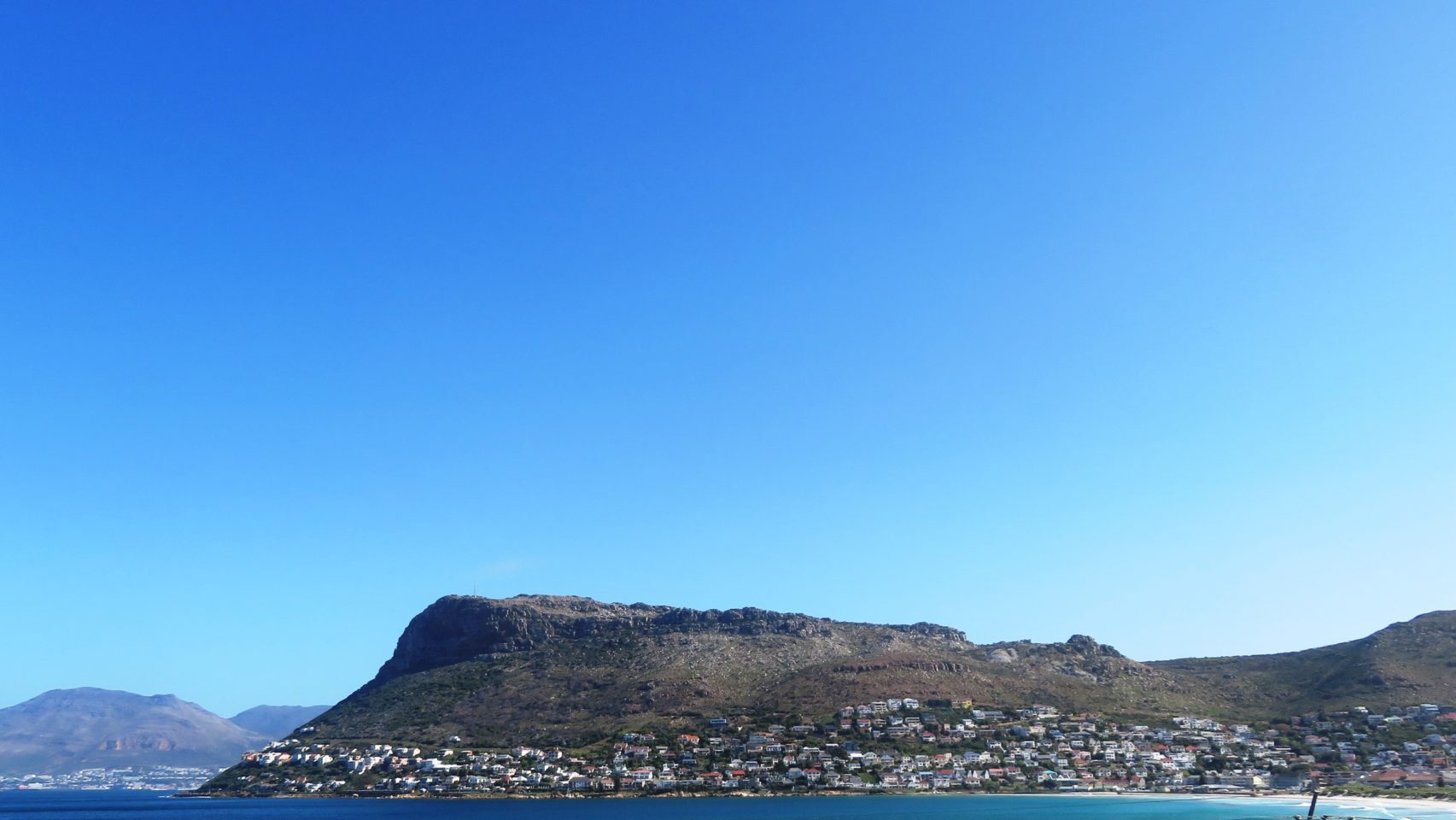 What is it about this area that is so universally appealing?   Let me suggest that the mesmerizing temperament of the Atlantic Ocean in this far corner of the world, the array of magnificent beaches, the awesome majesty of the natural rugged landscape of the coastal mountains, the picturesque towns nestled at the base of the mountains and along the coastline, even the more touristic of which are so impressively maintained, all combine with the indigenous flora and fauna of the vast Cape of Good Hope Nature and Animal Reserve to provide an overwhelming sense of spectacular charm and natural beauty. 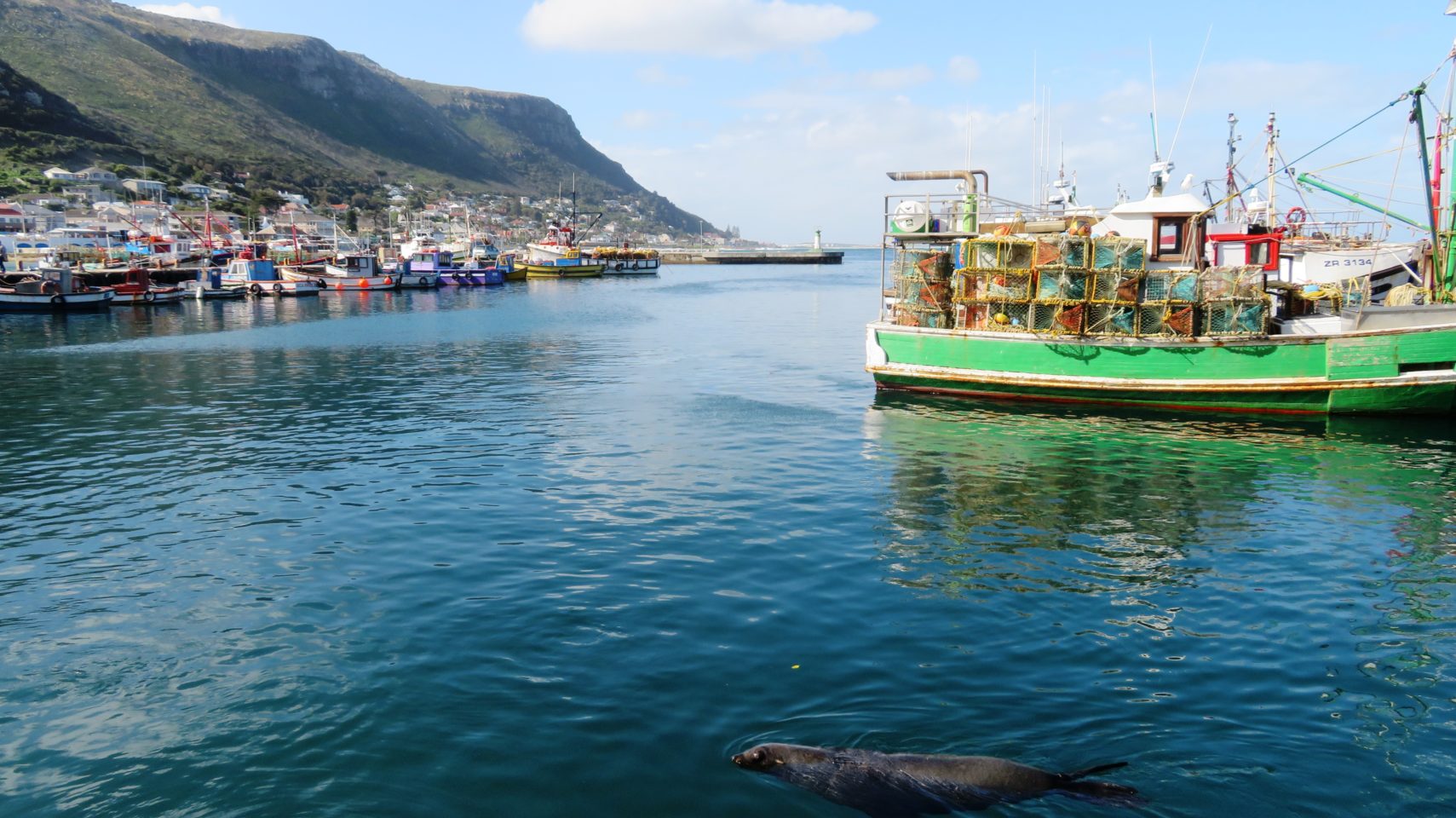 Of course, the breathtaking views and glorious sunsets as well as the animals in the reserve add to the exceptional character of the drive. 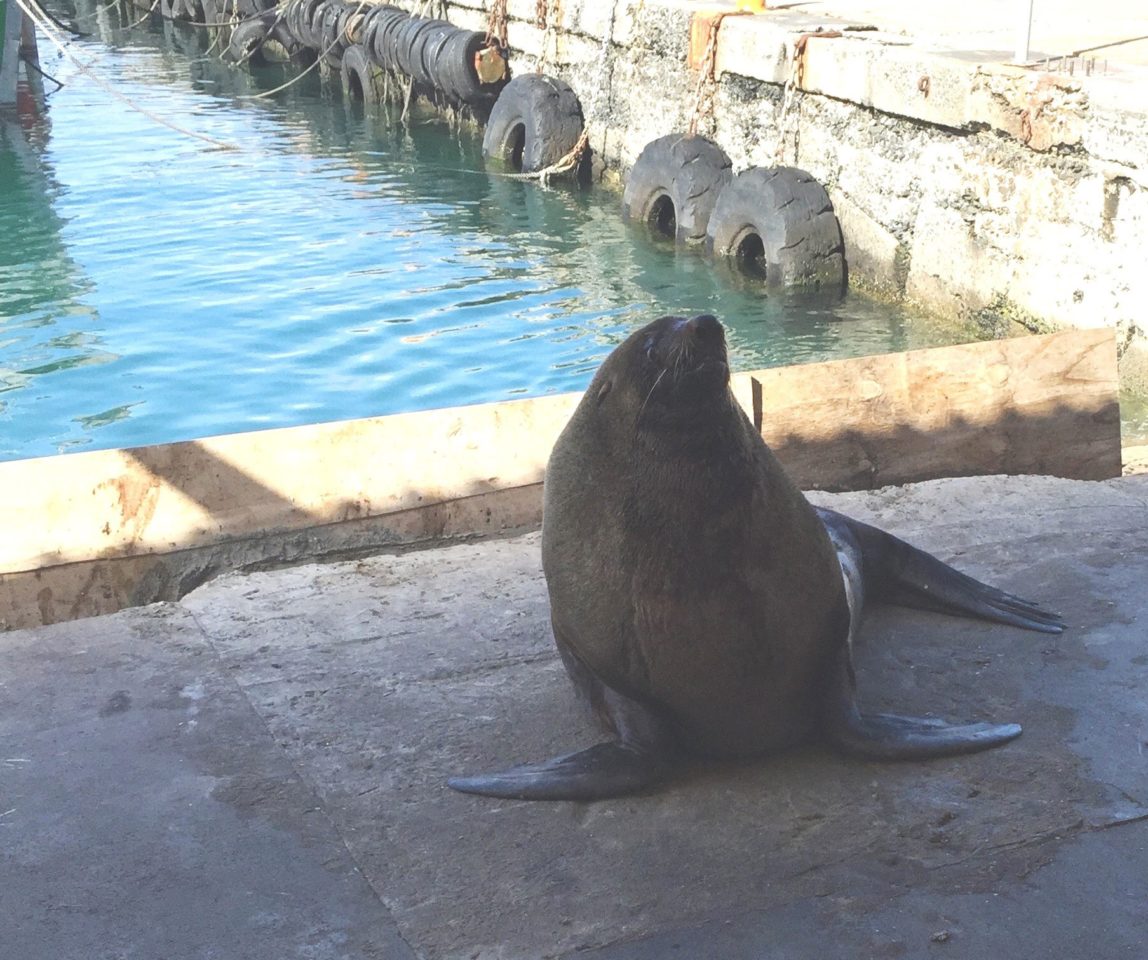 While we often got out of our car to admire the views, we also enthusiastically jumped out to enjoy close encounters with the animals we saw, including Ostriches who came to the edge of their fence to commune with us as well as a few old regal Seals in the harbor of Simons Town, one of whom seemed to feel he ruled that fishing village and barked at any passer-by who dared to walk into his territory. 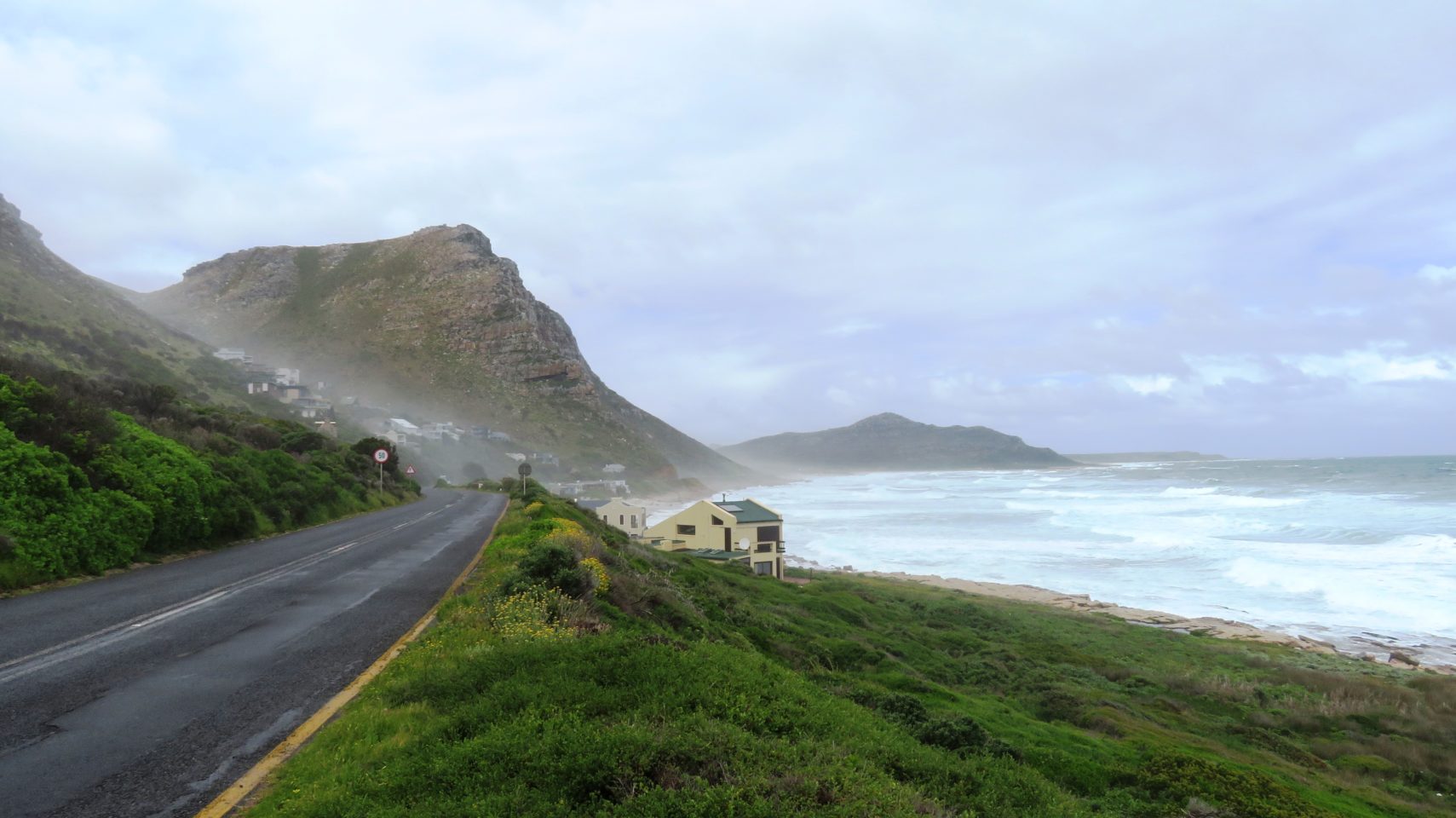 Aptly named “Misty Cliffs“, this fishing village nestled in the hillside with its rockeries, wild flowers and wild ocean is quintessential Cape Peninsula

But as for our animal encounters, none quite compared to those we had with the Baboons and Penguins. 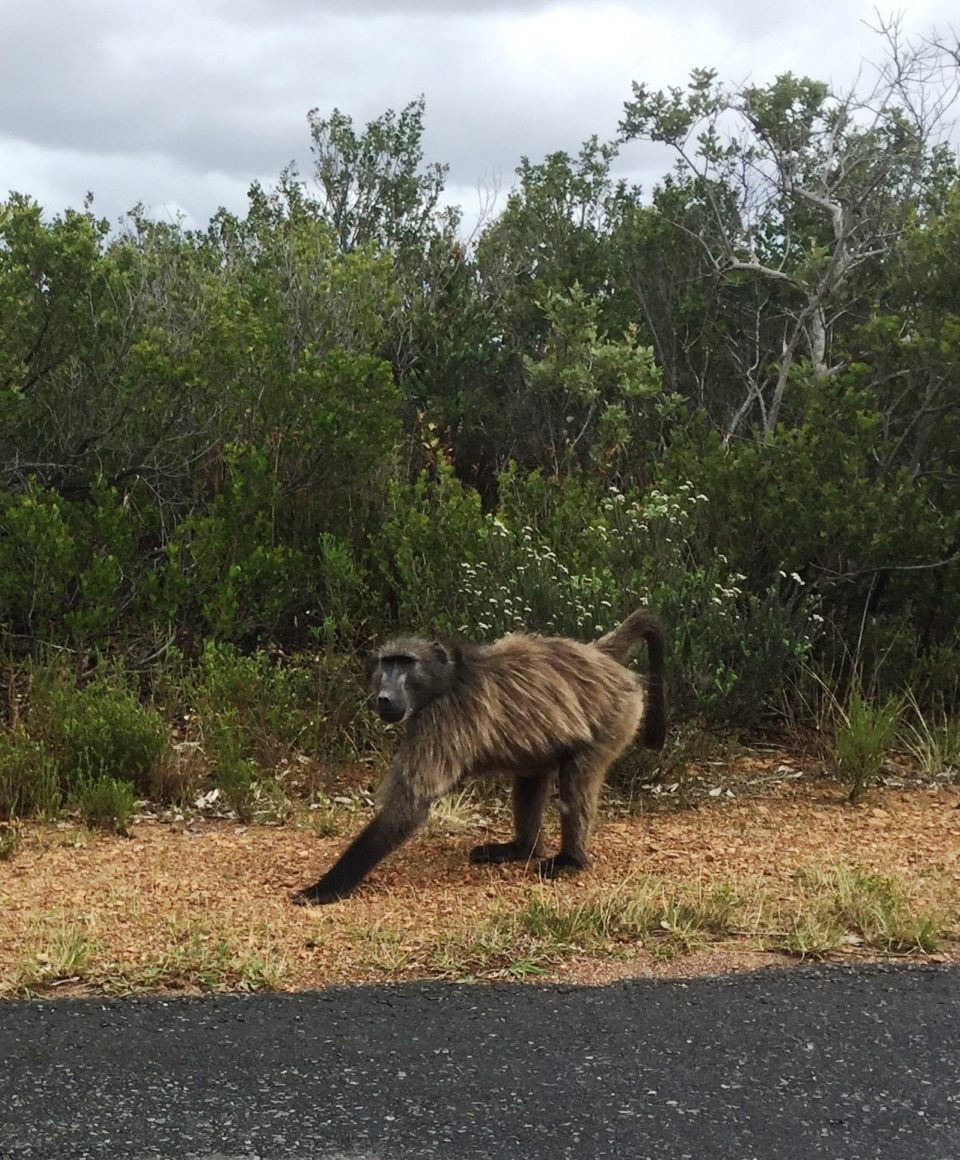 Along the road on the Cape Peninsula

In fact, the Cape of Good Hope is renowned for its many troops of Chacma Baboons which wonder freely throughout the reserve as the only protected population of the baboons in the world.  These close cousins of ours seem to sense that they are a major tourist attraction and generally like to strut their stuff for the humans parked in their cars who are excited to observe them in such close proximity … and that would include me.   So important on the world stage is this particular baboon population that the Cape Peninsula Baboon Research Unit has been created to research issues such as increasing pressure on the baboon population from habitat decline and the relationship between the peninsula baboons and their human neighbors. 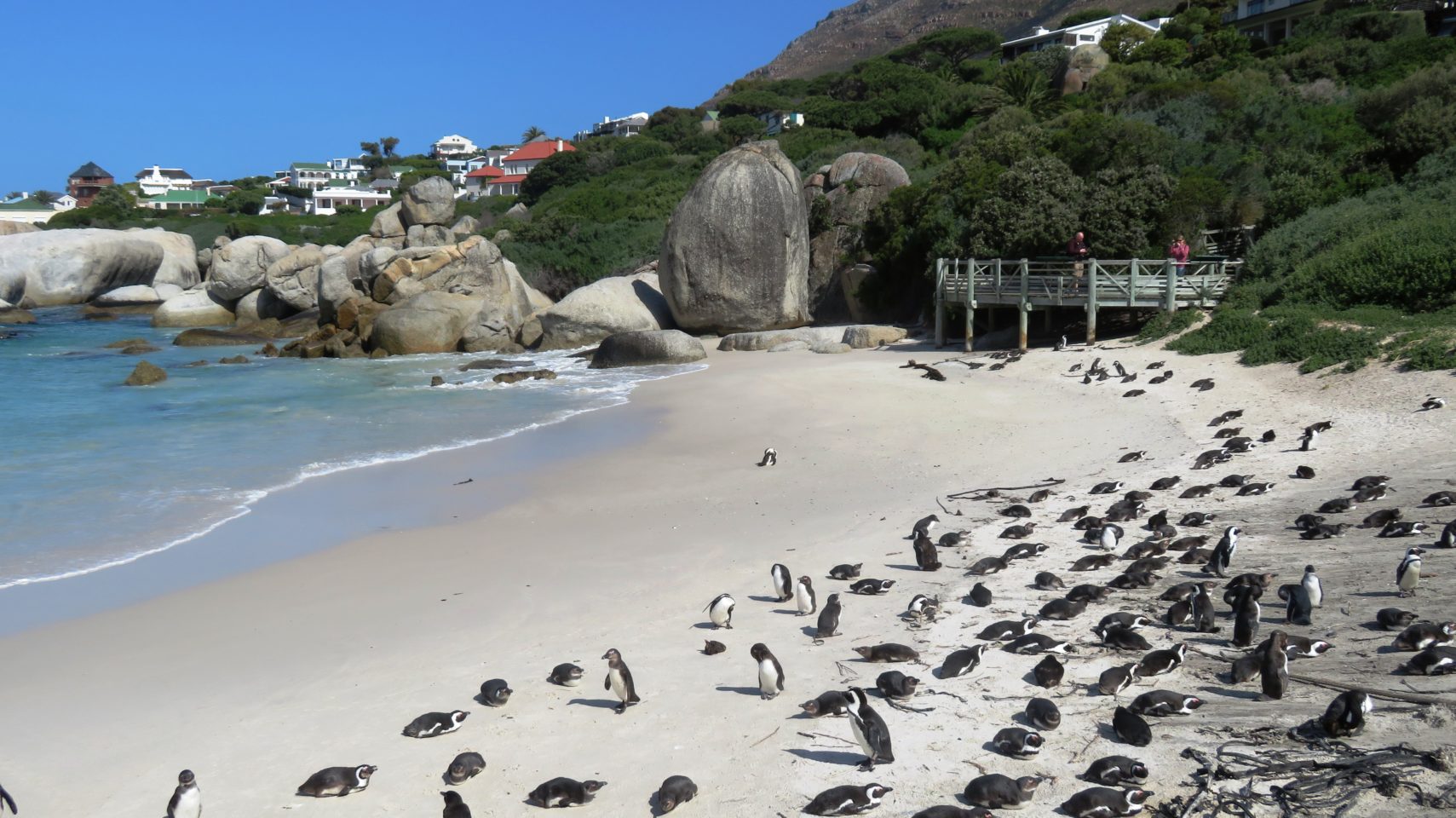 As for the Penguins, I was awed by the size of the colony of endangered African Jackass Penguins, so called for their hilarious braying call, which we saw at Boulders Beach Visitor Centre just around the corner from the seaside village of Simons Town. 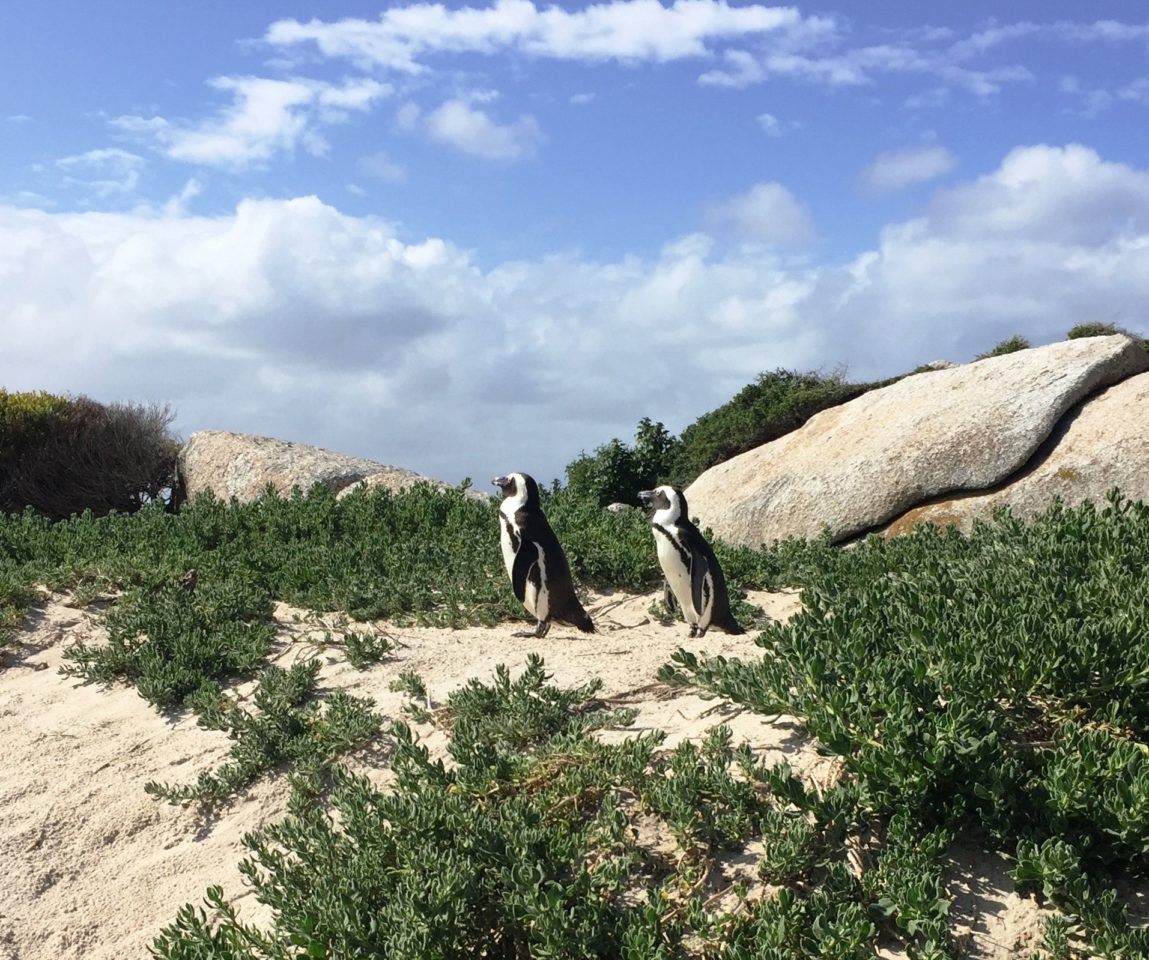 A couple of penguins strolling together on Boulders Beach ~ Cape Peninsula

I was also mesmerized by the entertaining socialization patterns of these adorable penguins, including the endearing way so many of them stroll around together like old devoted couples. 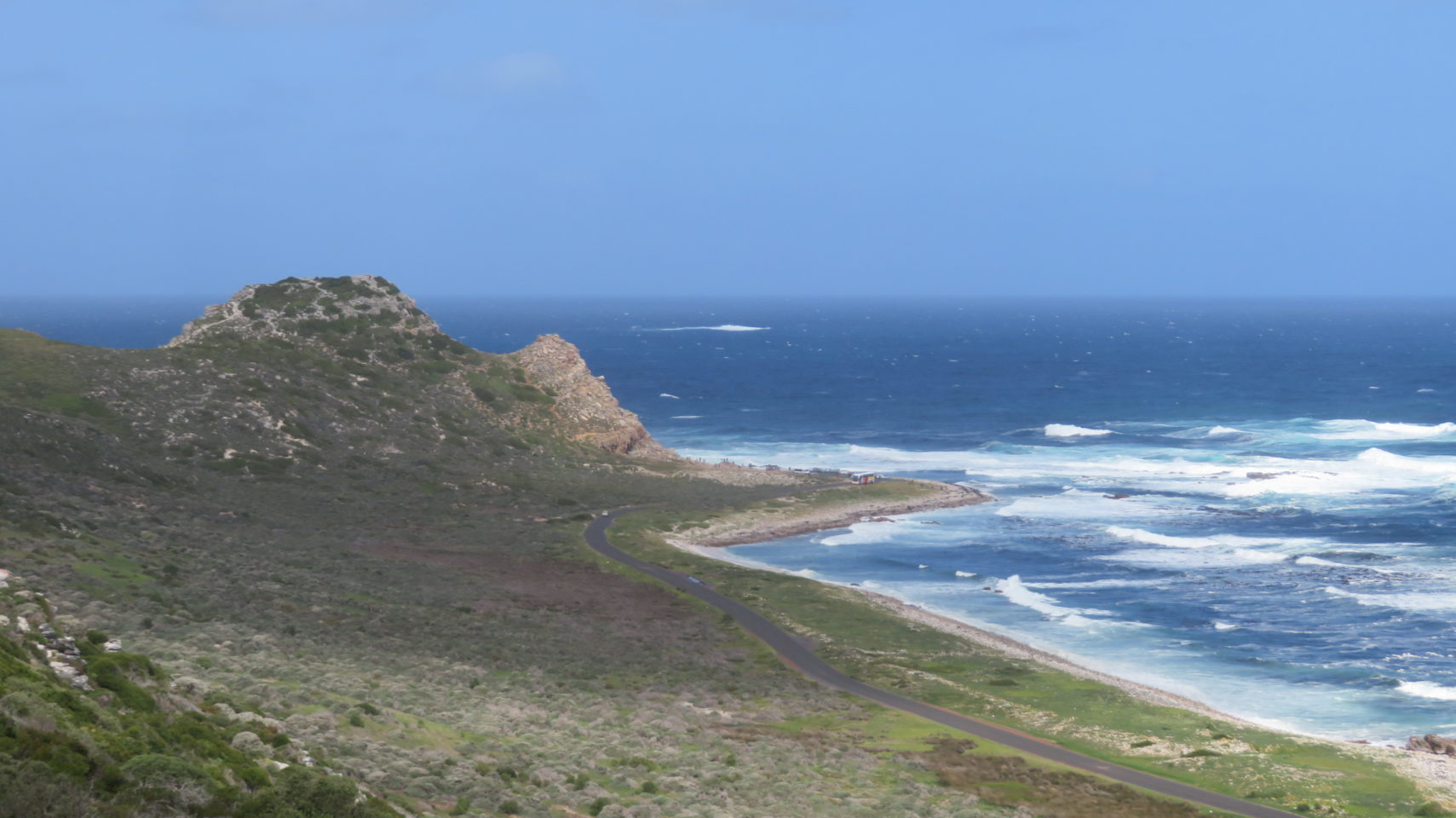 Of course, a great day of touring would not be great enough without some memorable meals.  Our lunch stop was timed perfectly to coincide with our arrival at Cape Point which locals claim is the meeting-point of the Atlantic and Indian oceans. 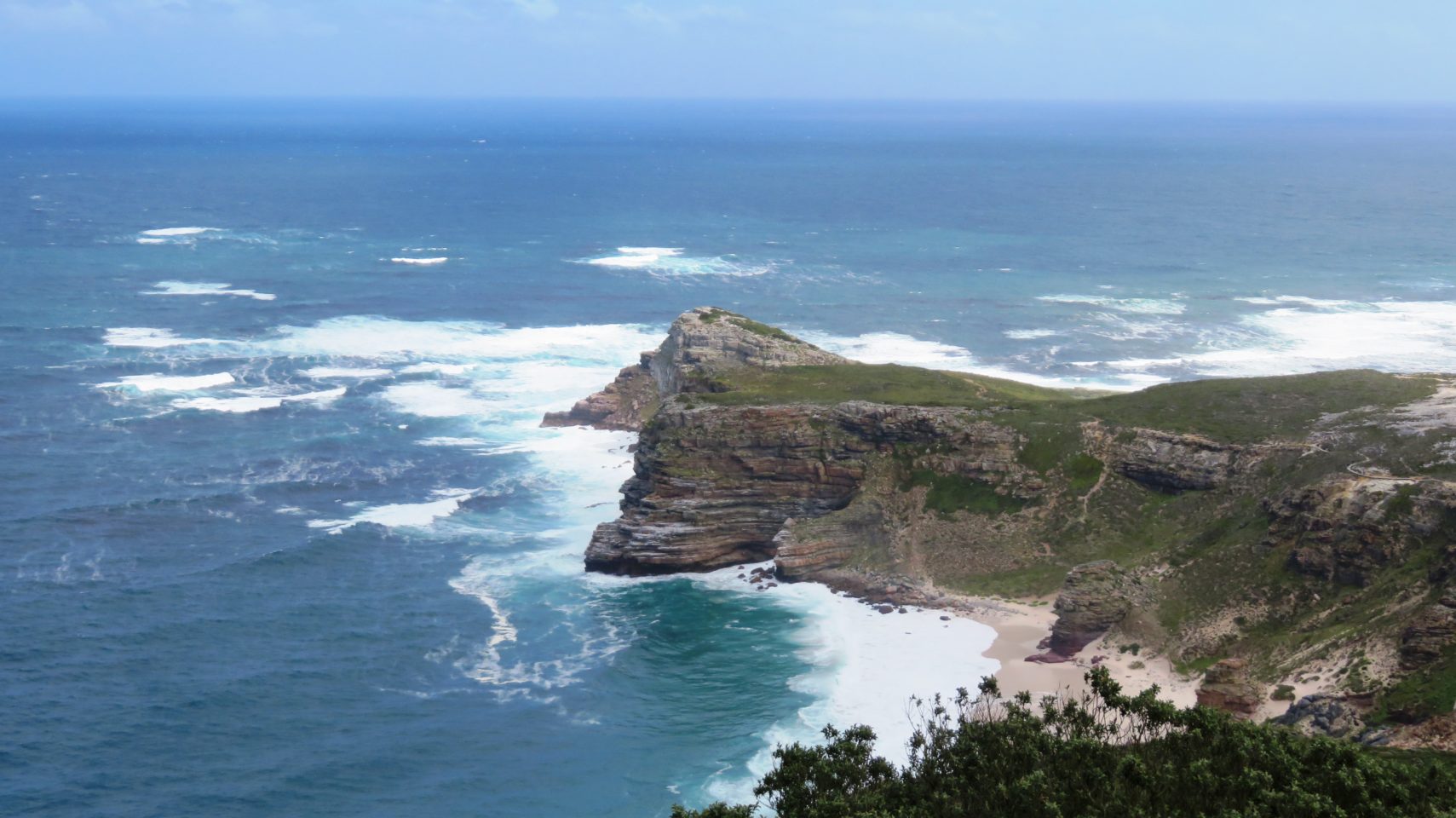 Rumor has it that you can breathe the freshest air in the world here since it blows directly in from the Antarctic. 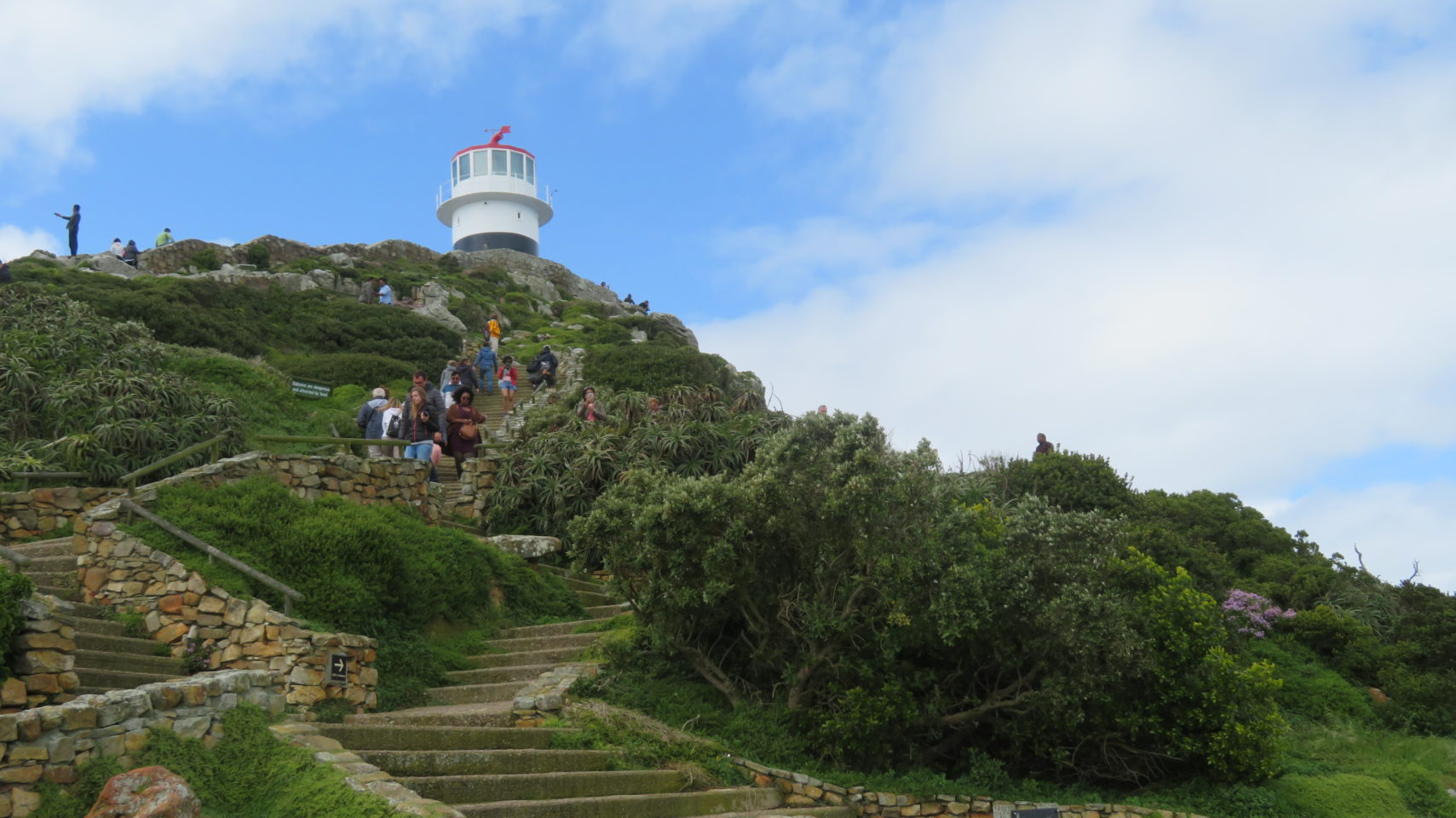 After riding up the Flying Dutchman funicular, which takes its name from the local legend of the Flying Dutchman ghost ship, up the steep hillside through the dense South African fynbos to the lighthouse and enjoying some of the best panoramic coastline views in the world, we descended a bit wind-whipped to the restaurant at the base of the funicular. 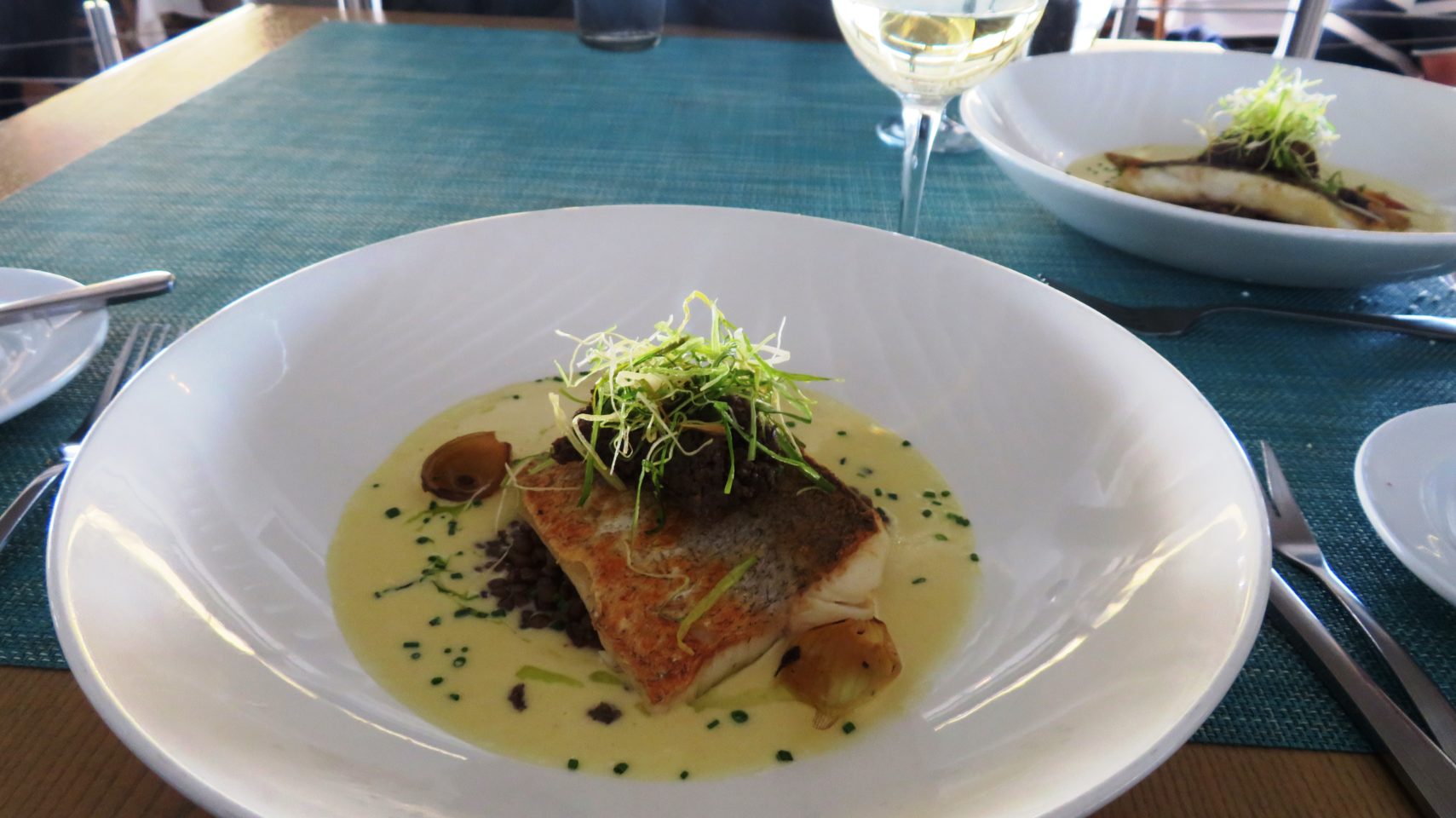 The aptly named Two Oceans Restaurant  was refurbished in 2012 to provide guests with the impression that they are enjoying their meal aboard an ocean liner with the ocean in front of them.  In actuality, the restaurant does provide that awesome feeling as you peer out of the wall of windows and see nothing but the magnificent ocean in front of you.  Lunch of Saldanha Bay Oysters with a simple Shallot Vinaigrette and lemon followed by a platter of freshly caught Line Fish accompanied by Jerusalem artichokes, puy lentils, pickled onions, mushrooms and crispy leeks with a glass of South African Chardonnay was simply perfection, and so was the view. 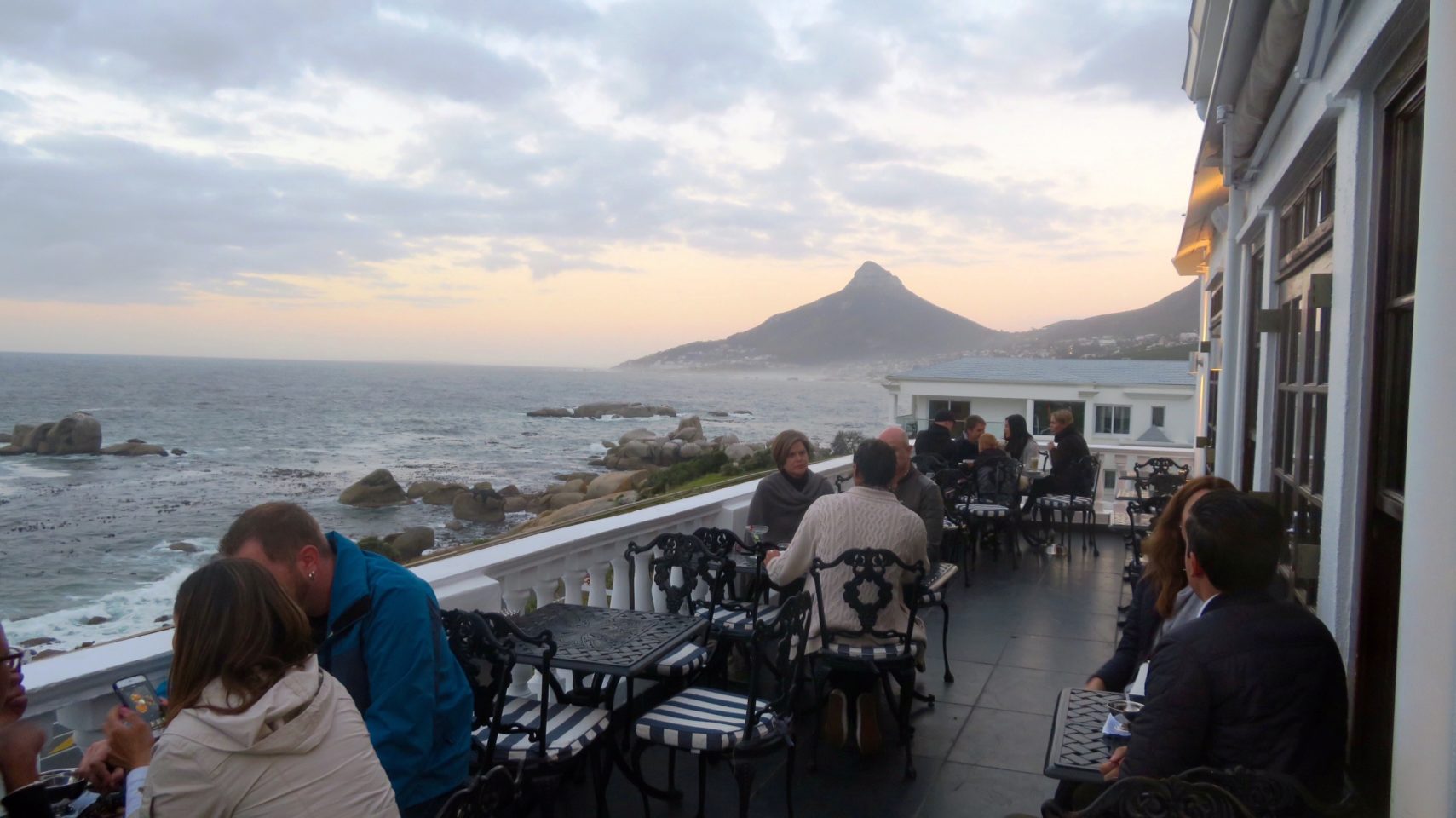 One of the many glorious views from the ultra-charming Twelve Apostles Hotel & Spa ~ Camps Bay, Cape Peninsula

Dinner that evening meant a return to the seacoast to the luxurious Twelve Apostles Hotel and Spa, a member of the fabulous family-run Red Carnation Hotels collection, where we were pampered with cocktails in front of the fire in the hotel’s spectacular Leopard Bar and then treated to a delicious meal at the Azure Restaurant renowned for its fine dining and spectacular views.  I would add that this charming boutique hotel offers exceptional ocean and mountain views from most every room in the hotel. 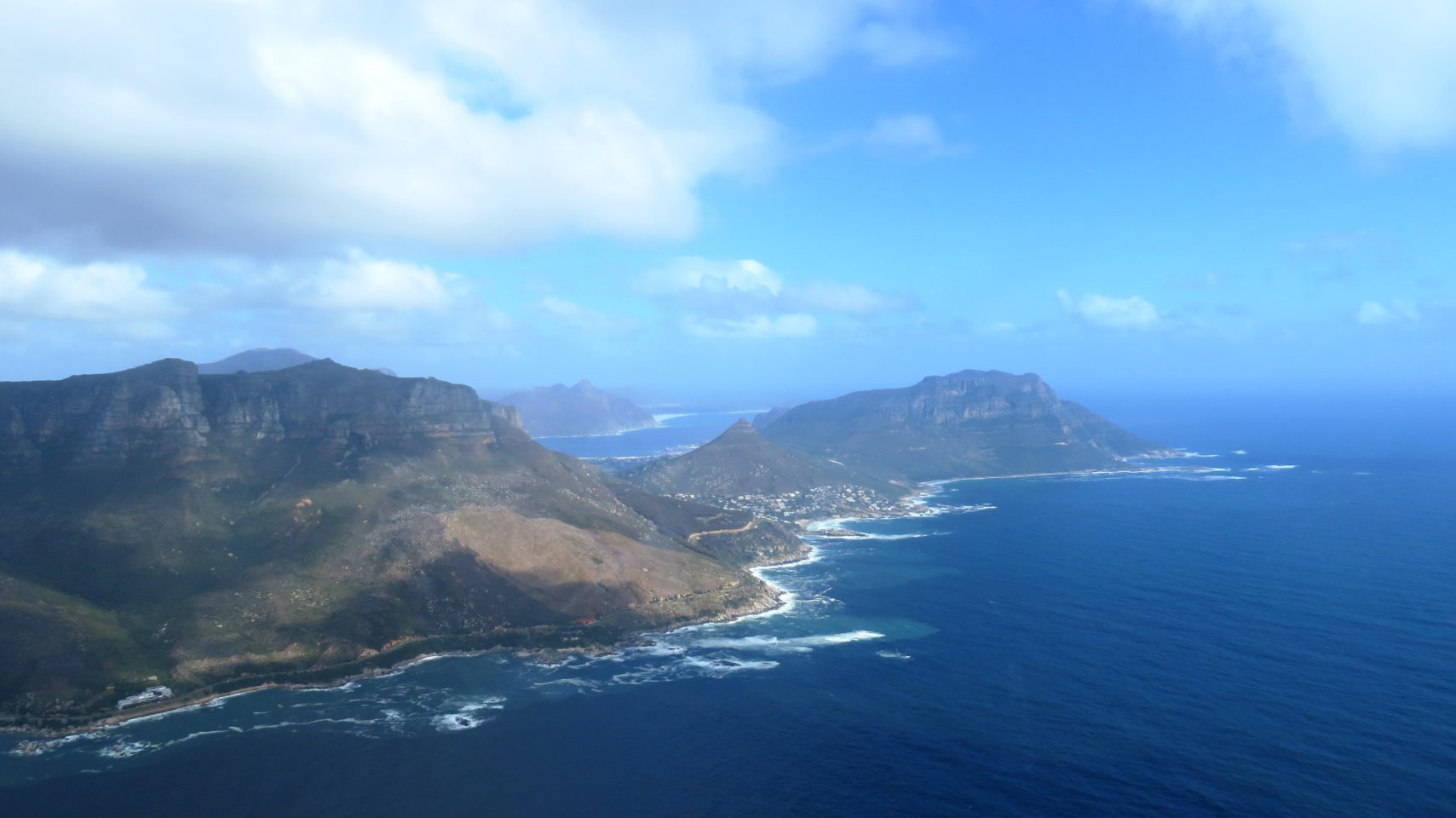 At every twist and turn in the Cape Peninsula Drive, with every view down to the ocean or up to the mountain tops, there is a new picturesque view to admire, another “wow” factor. They quickly add up to extraordinary.  Memories of our day on the Cape Peninsula are already calling me back … 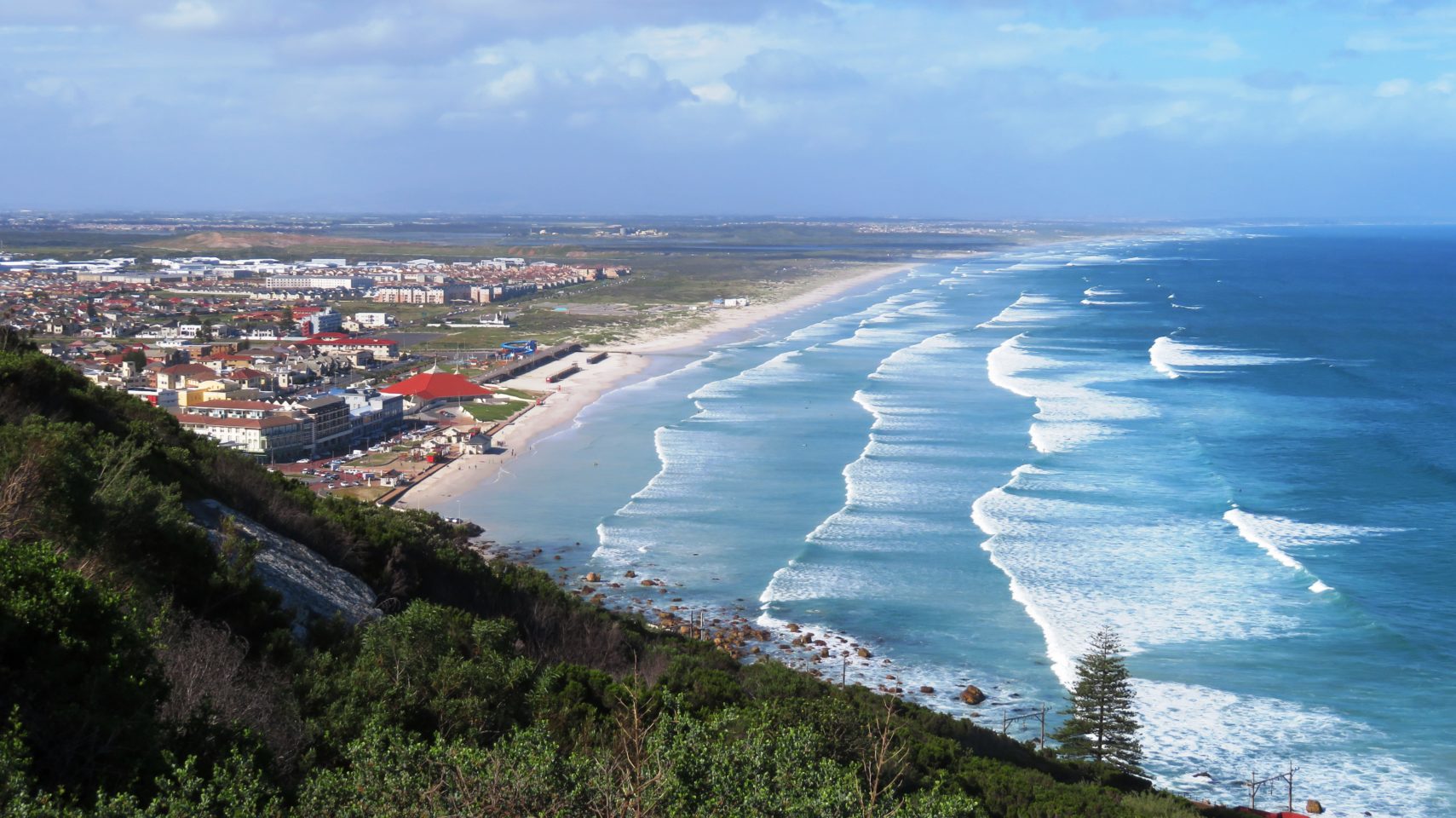 Muizenberg, the most popular town on the Indian Ocean side of Cape Peninsula