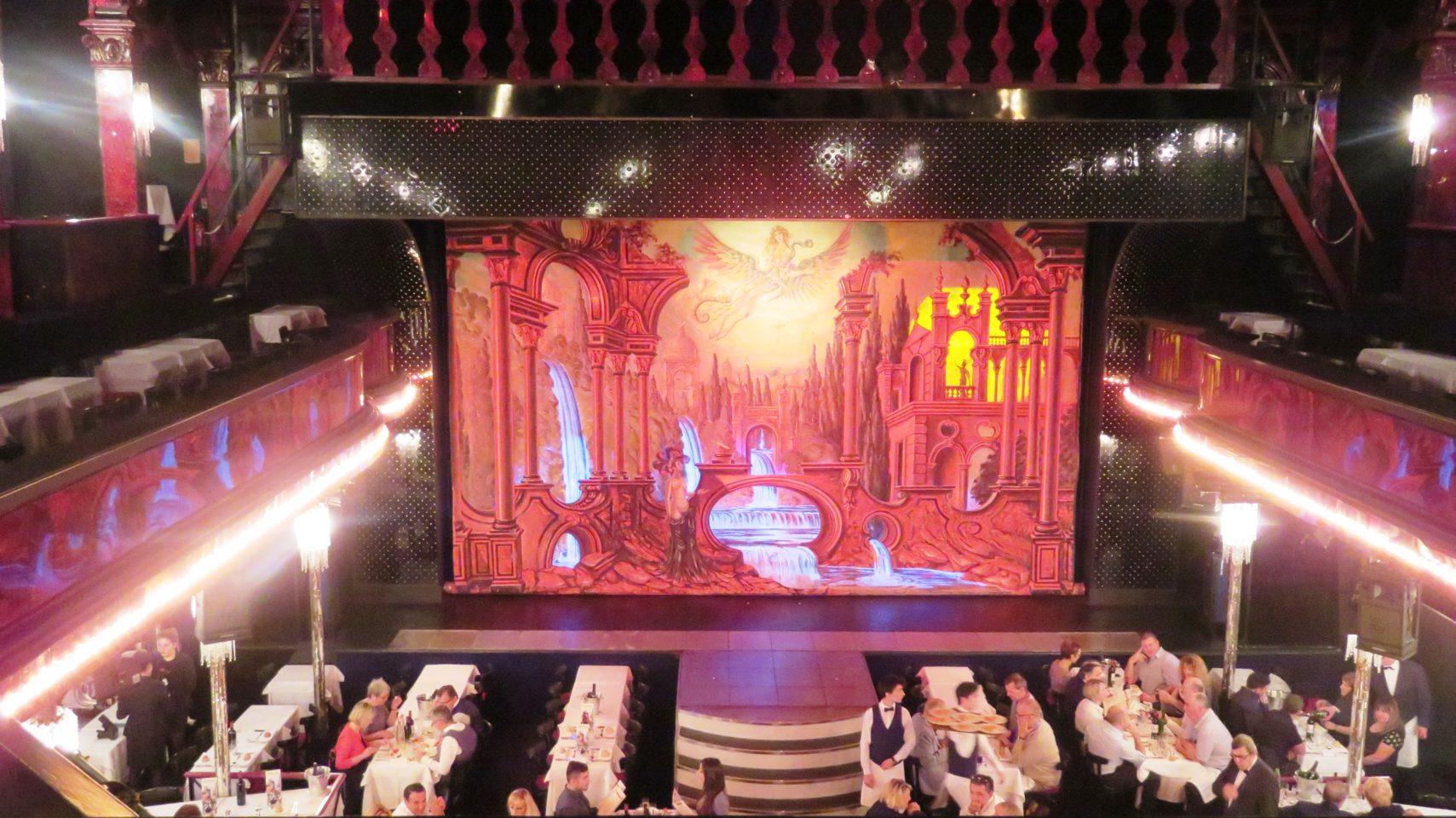 Aaah Paris … I have loved that city ever since we first moved to France in 1974.  I love the food, the music, the museums, the adoration of all things beautiful, and the joie de vivre that permeates the French lifestyle.  So when we were invited to the Paradis Latin Cabaret for our last night in Paris, I was ecstatic. The perfect way​,​ I thought​,​ to end our trip to France. 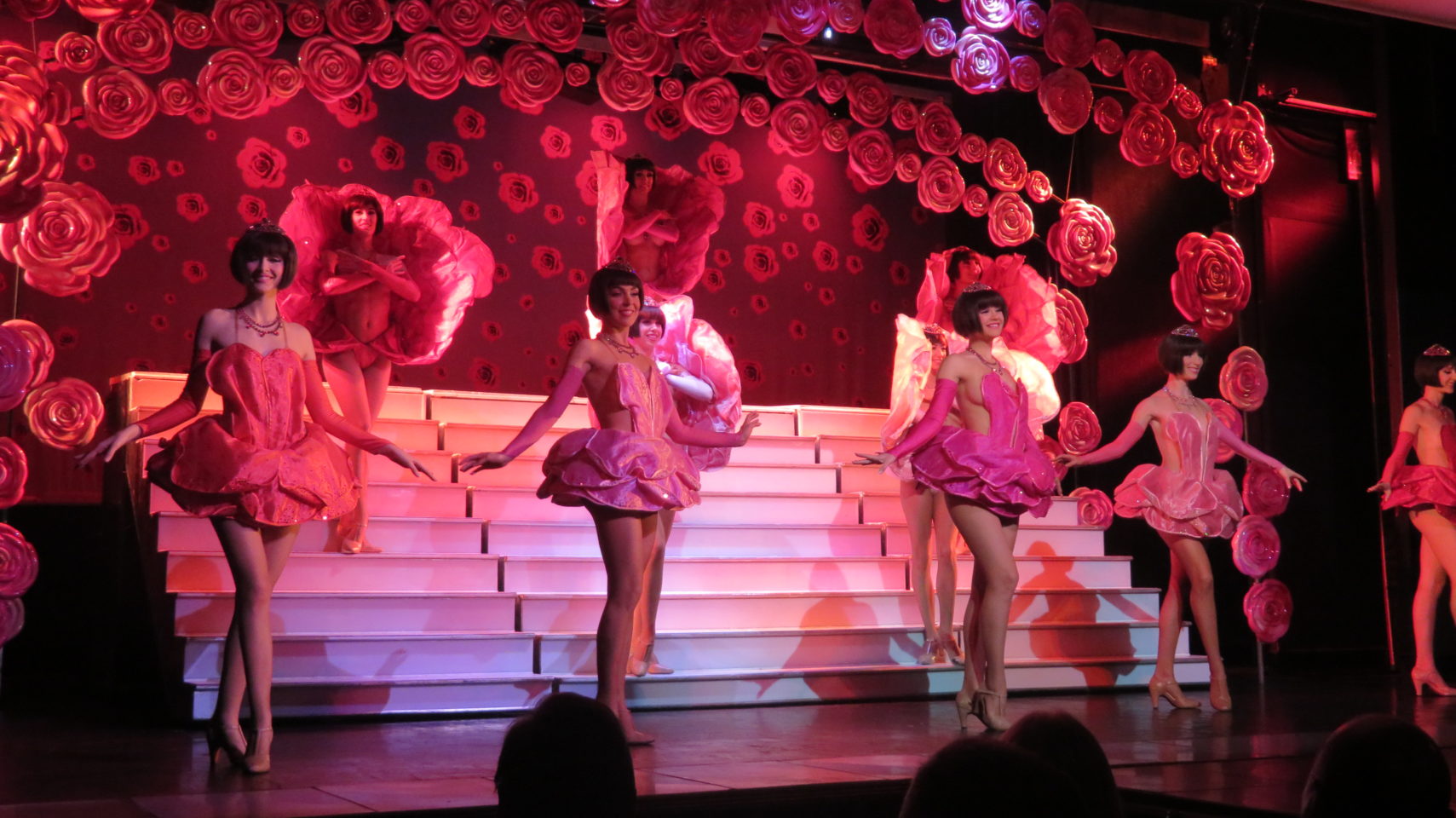 But after a full day of touring the Louvre the morning of our last day in France, followed by a long lunch with my nephew at Le Procope, the oldest restaurant in Paris, and the rest of the afternoon spent feasting my eyes on the Monet collection at the Musée Marmottan, I didn’t think I had the energy to go to dinner and a show.  Little did I know! 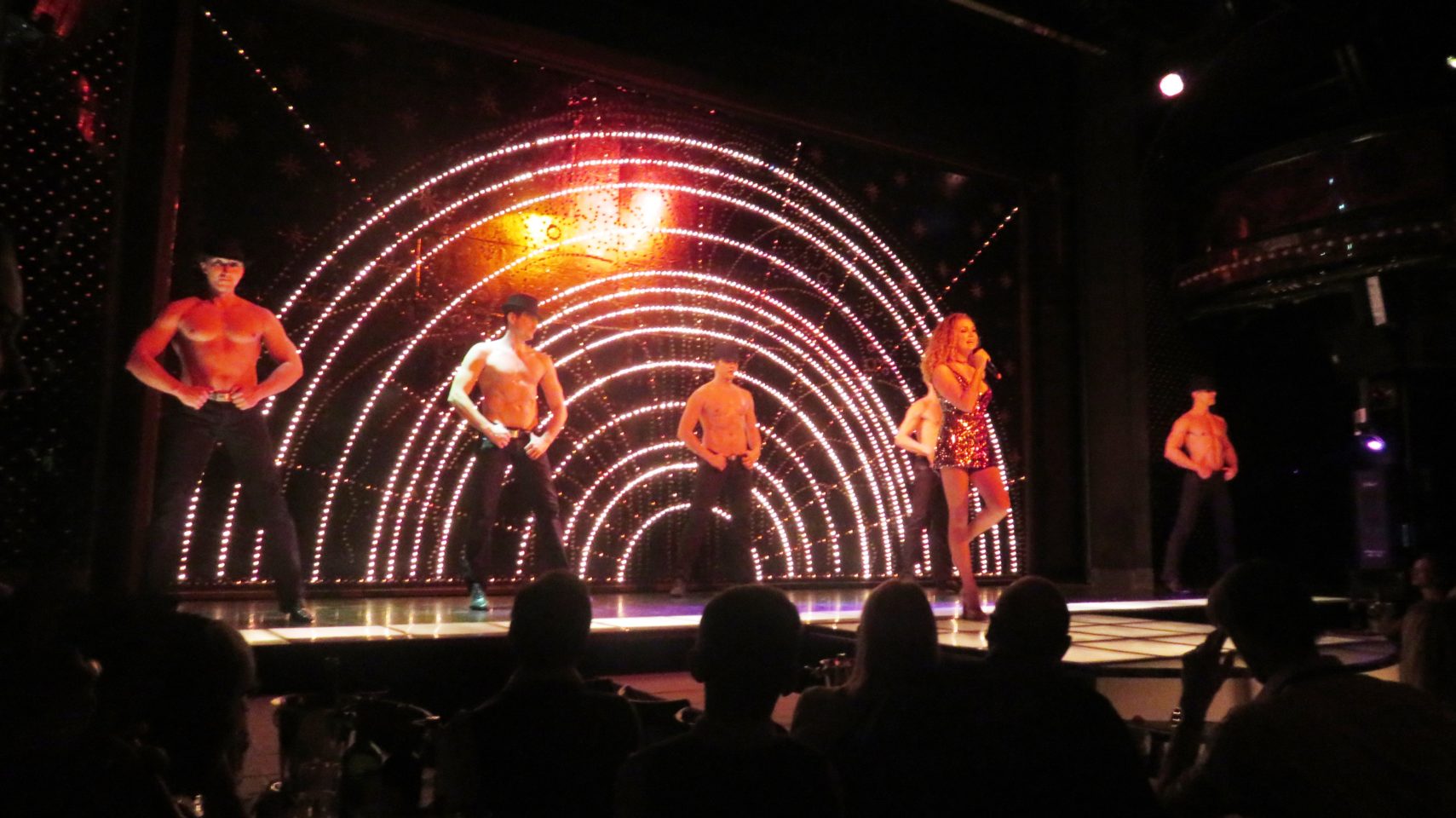 Throughout our long love affair with France, we have been to other cabarets but never one with a history as fascinating​ and distinguished​ as that of Paradis Latin or ​with ​a show featuring sex appeal of such a sophisticated nature and top notch entertainment.  Plus, the champagne, food and wine do justice to this Gusta​fe​ Eiffel-designed building. 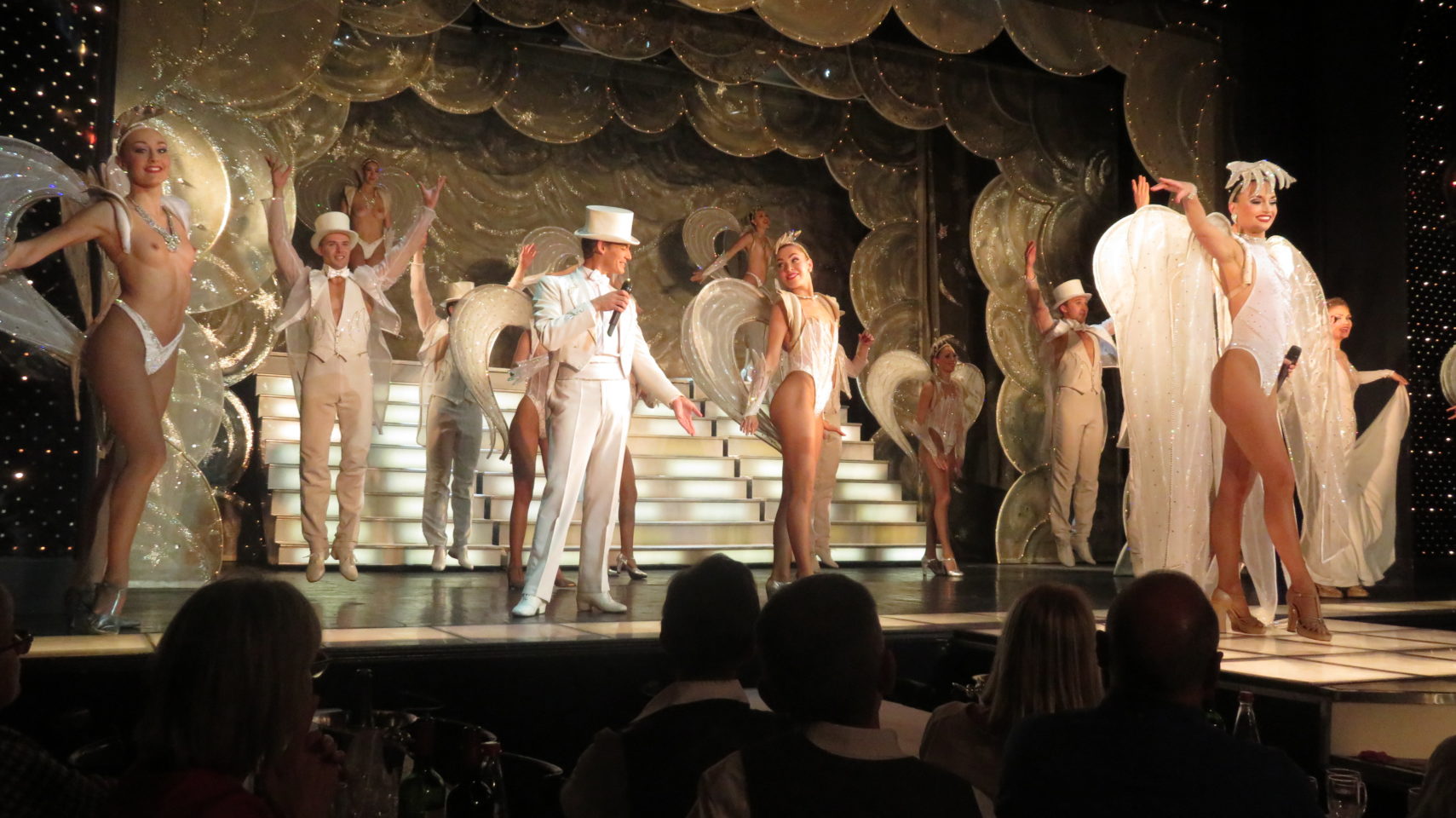 Yes, Eiffel of the “Eiffel Tower” was the genius who built the Paradis Latin.  But there was actually a Cabaret theatre on this ​same ​spot pre-Eiffel​ which was built in 1803​ by none other than Napoleon Bonaparte.  T​he ​Théâtre Latin​, as it was known back then, came into its own during the period following 1830 when it attracted a very heterogeneous clientele, from bourgeois intellectuals and students to workers, merchants and aristocrats. Moreover, the lower floor of the theatre hosted a Literary Salon which attracted great writers of the era from Honoré de Balzac to Alexandre Dumas and Victor Hugo. 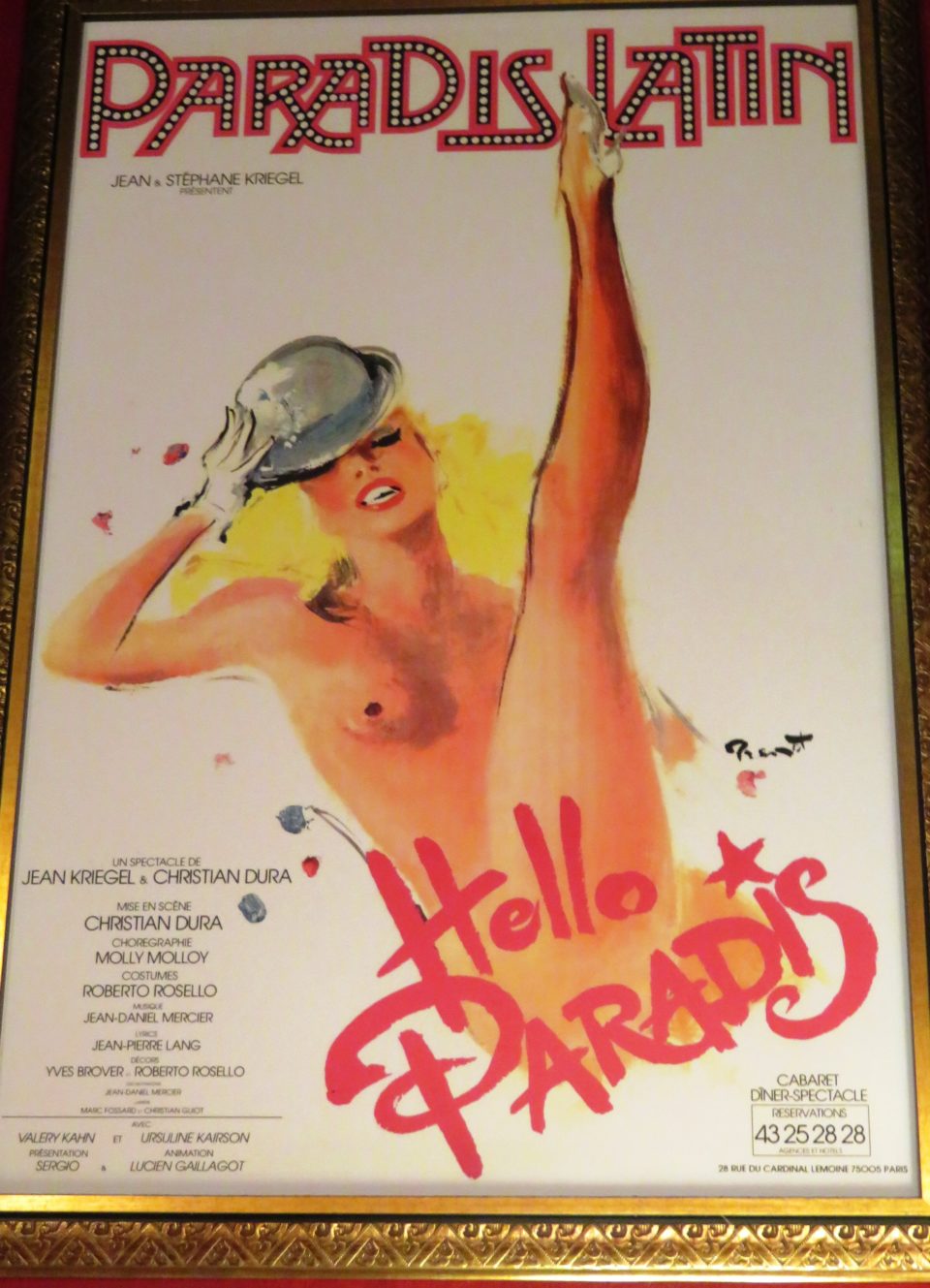 Sadly, however,  Le Théâtre Latin​ was destroyed in a fire during the Franco-Prussian war and remained empty until the city of Paris began a major restoration in preparation for the Universal Exposition of 1887 and called upon the renowned architect, Gustave Eiffel, to reconstruct the theatre.  The theatre reopened in 1889 as the Paradis Latin Cabaret and entertainment history was made until the rise of Montmartre during La Belle Époque when Le Can-Can and striptease became all the rage in cabarets over on the right bank.  Eventually, Paradis Latin closed its doors, and it was not until 1973 that a new buyer appeared with the intention of renovating the building and transforming it this time into apartments. 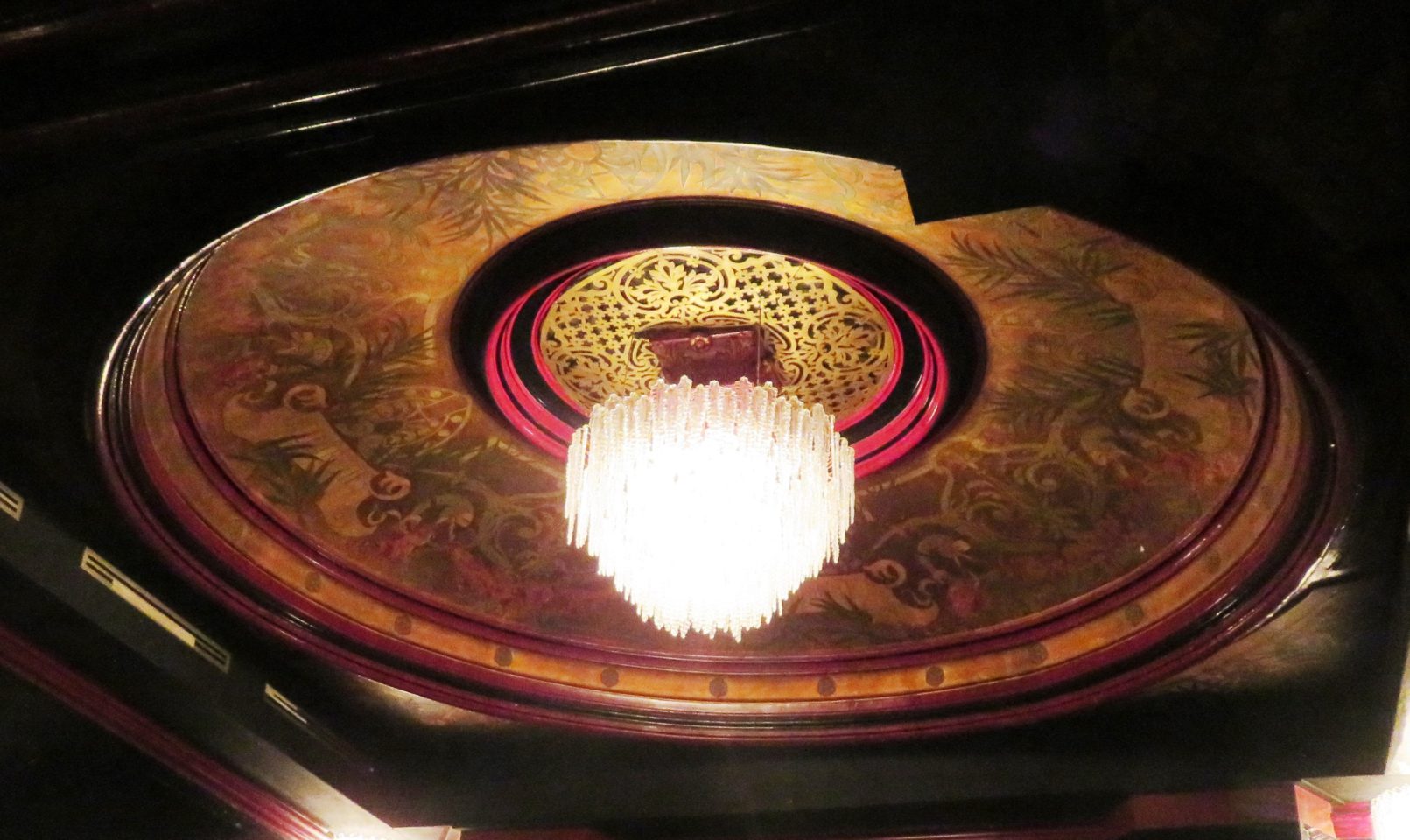 The magnificent cupola of the Paradis Latin cabaret ~ Paris, France

Imagine his surprise when the renovation work uncovered not just vestiges of the previous cabaret but also the unparalleled architectural structure of Eiffel, including a magnificent cupola with hand-painted depictions to the glory of opera, ballet and pantomime!  What else could the new owner, Jean Kriegel, do but aim to restore this historic structure and theatre to its original glory?  In fact, after its restoration one of my favorite female French singers of the 20th century, Line Renaud who made the French song Ma Cabane au Canada famous, was one of the many headliners who helped bring Paradis Latin to the top of its game. 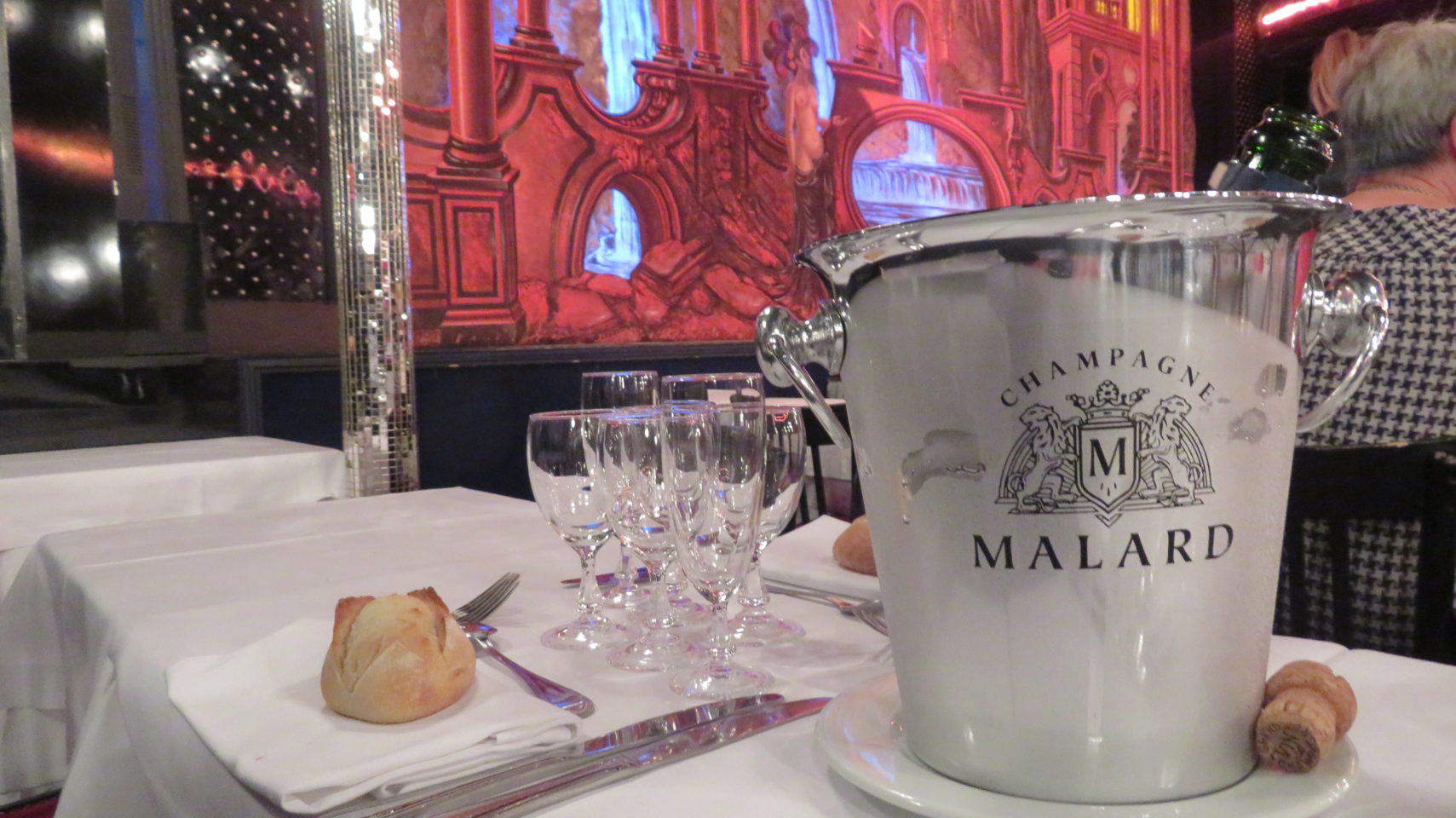 Fast forward now to our visit in 2016.  The sex appeal element of La Belle Epoque is still undeniably a key element, but the oooh la la is subtle, tasteful and refined. There is no strip-tease.  The dancers are in various states of dress, or undress, and … like beautiful works of art … they are simply stunning to admire.   The real magic at Paradis Latin comes from highly trained professional dancers, singers and other cabaret performers in chic French costumes surrounded by gorgeous scenery in a masterfully staged production giving their all in perfect harmony to produce a spectacular show!  Plus, unlike some of the other cab​aret shows in pack-them-in-size theatres, the Paradis Latin theatre is ​not only an historic landmark structure but also ​an ideal size to create a civilized and intimate ambiance. 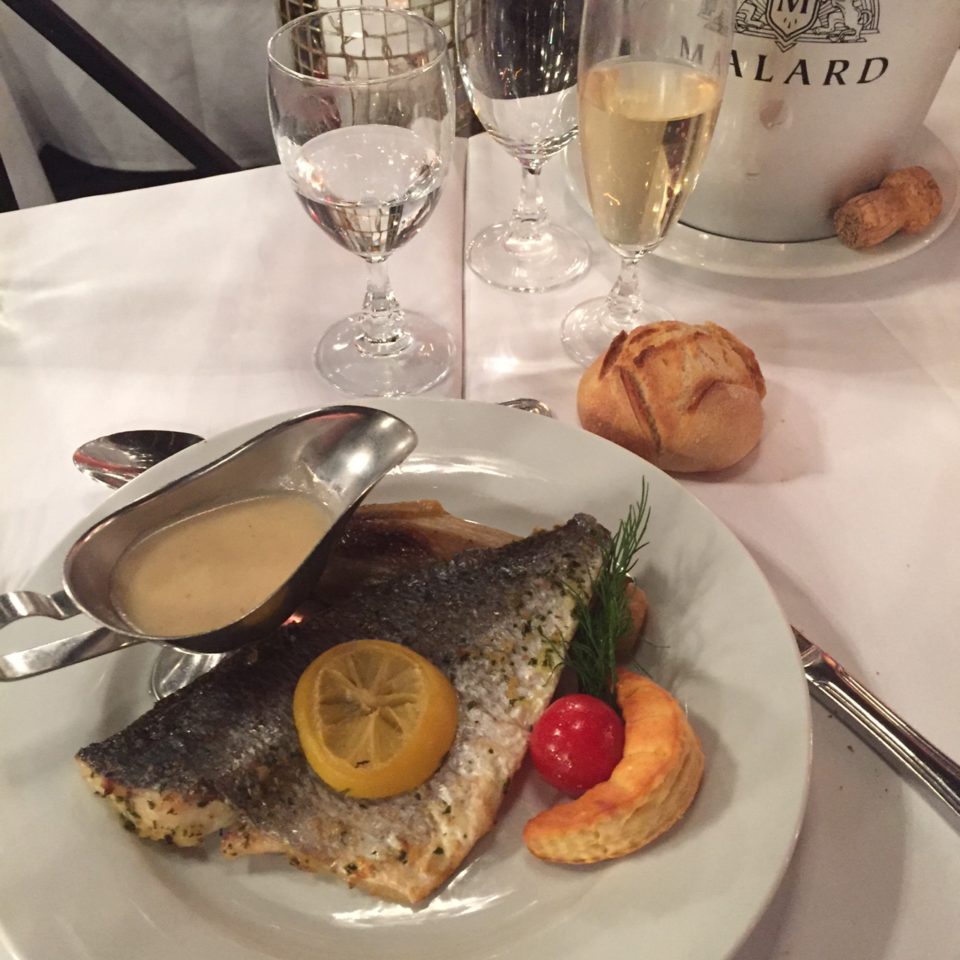 Although the show is of course in French, if you are not a Francophone you’ll be pleased to know that the important parts are translated into English​ and, in any case, most of the show is visual, not verbal. ​​Simply the fact that the show is in French signals that the show is aimed at the French public, not just the tourists, which helps assure the consistent quality of the performance. 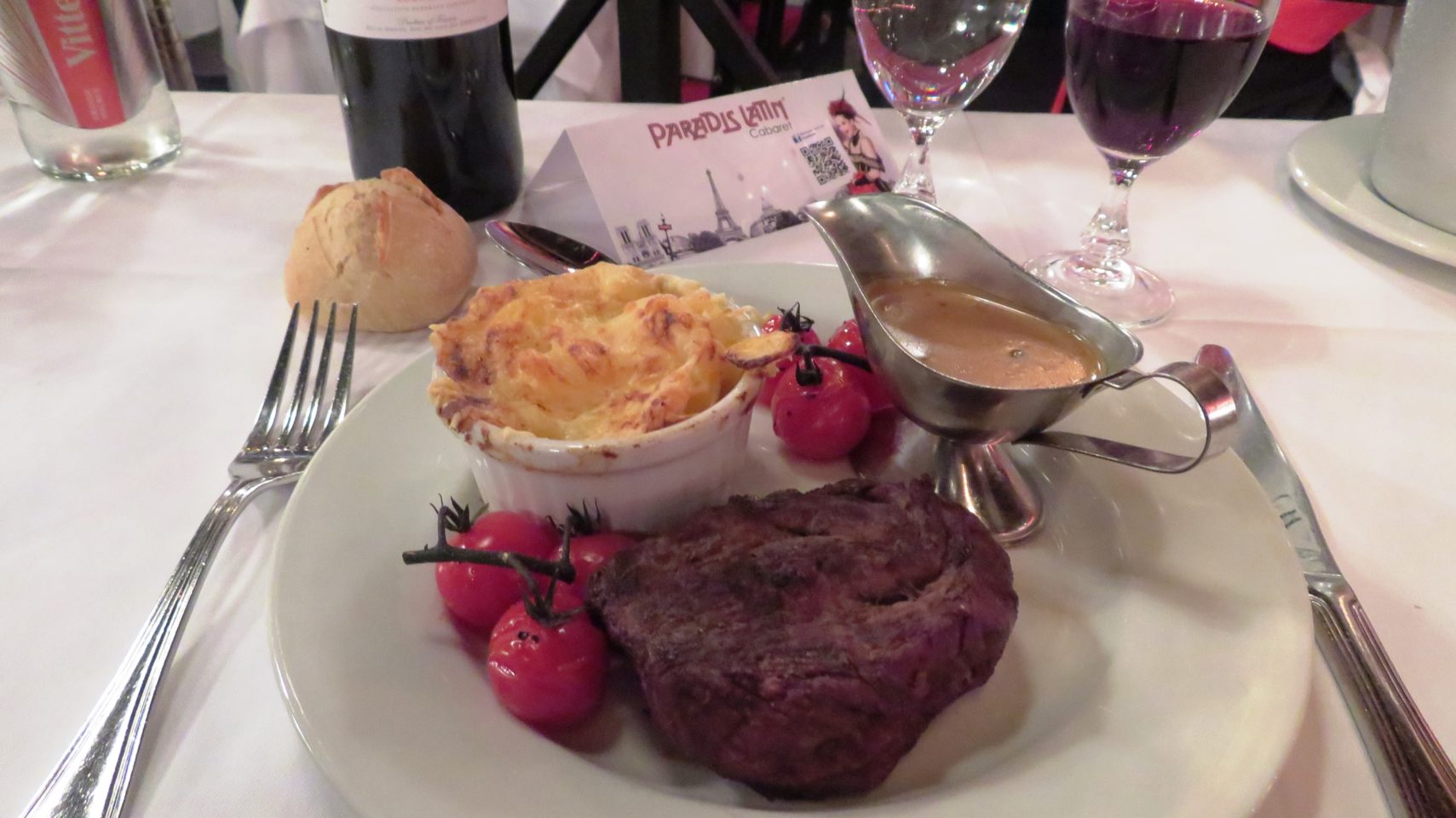 Since I’ve been to quite a few dinner shows and nightclubs where the food was nothing memorable, I honestly ​did not expect that the quality of the dinner would live up to the caliber of the entertainment.  But it does at the Paradis Latin.  Clearly the chef and staff are also well trained professionals.​  Denis and I both started with the foie gras on toasted brioche to accompany the rich and aromatic Champagne Malard we were drinking … delightful.  Then I moved onto the roast filet of Sea Bream with lemon confit and braised endives while Denis had the Chateaubriand with four-pepper sauce and gratin Dauphinois.  Both dishes were artfully presented and perfectly cooked. Plus the service was excellent.  As for dessert, Denis enjoyed his traditional French apple tart with caramel sauce while I selected the lighter choice of a symphony of sorbets.  The meal was not only enjoyable, it was memorable, and I definitely am looking forward to returning when we are next in Paris for another spectacular evening at the Paradis Latin Cabaret. 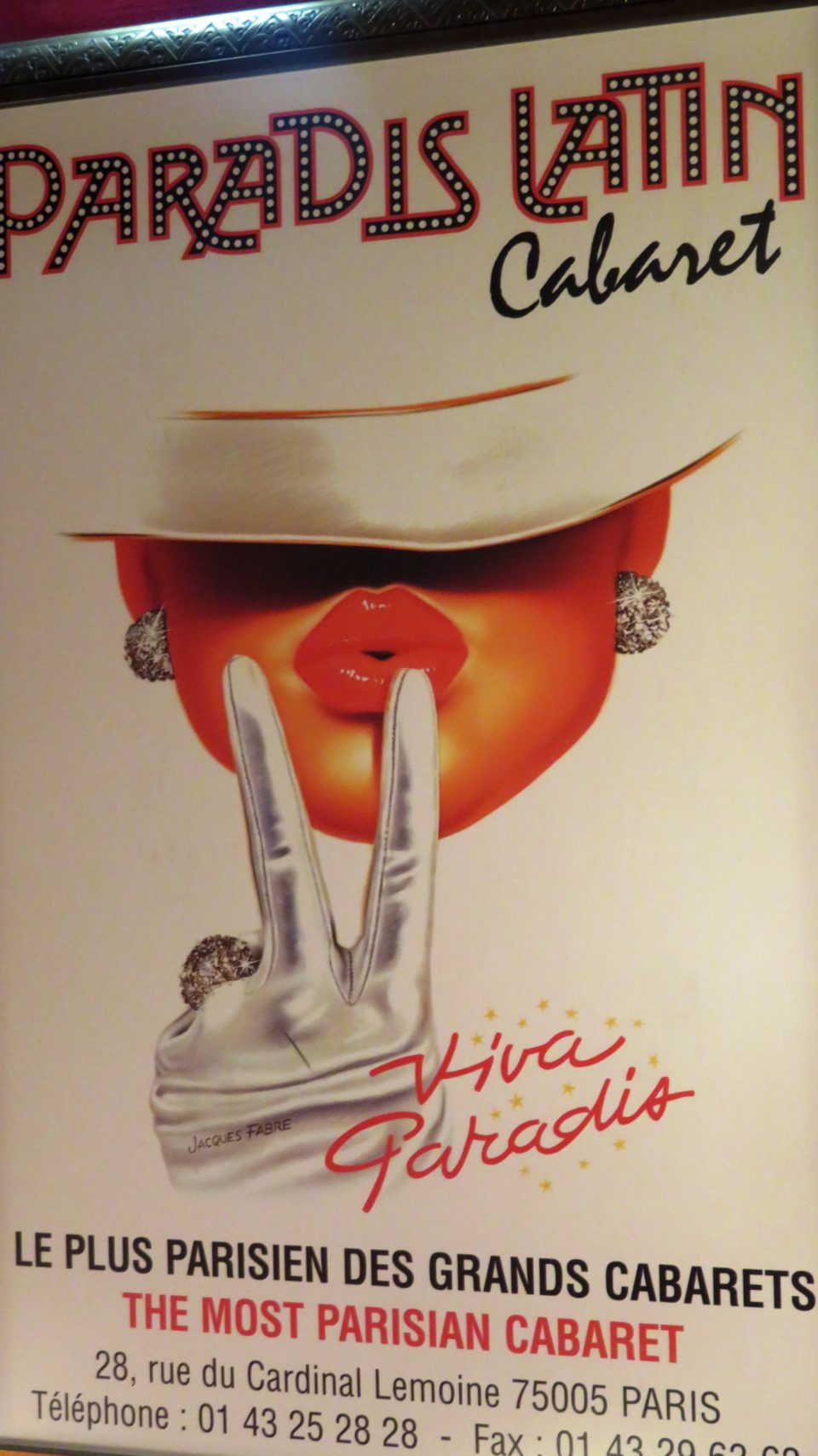 If you are interested in ​this unique — “only in Paris experience” –​​, I recommend you purchase the best seats available to enjoy the close-up and personal view of the gorgeous, and bien sur – sexy! – young women.   Was I still feeling tired at the end of the show?  Au contraire … I was ​impressed by the professionalism of the performers and ​invigorated by the​ir​ joie de vivre.  ​Plus​ I will always be excited by a superb can-can at the grand finale! 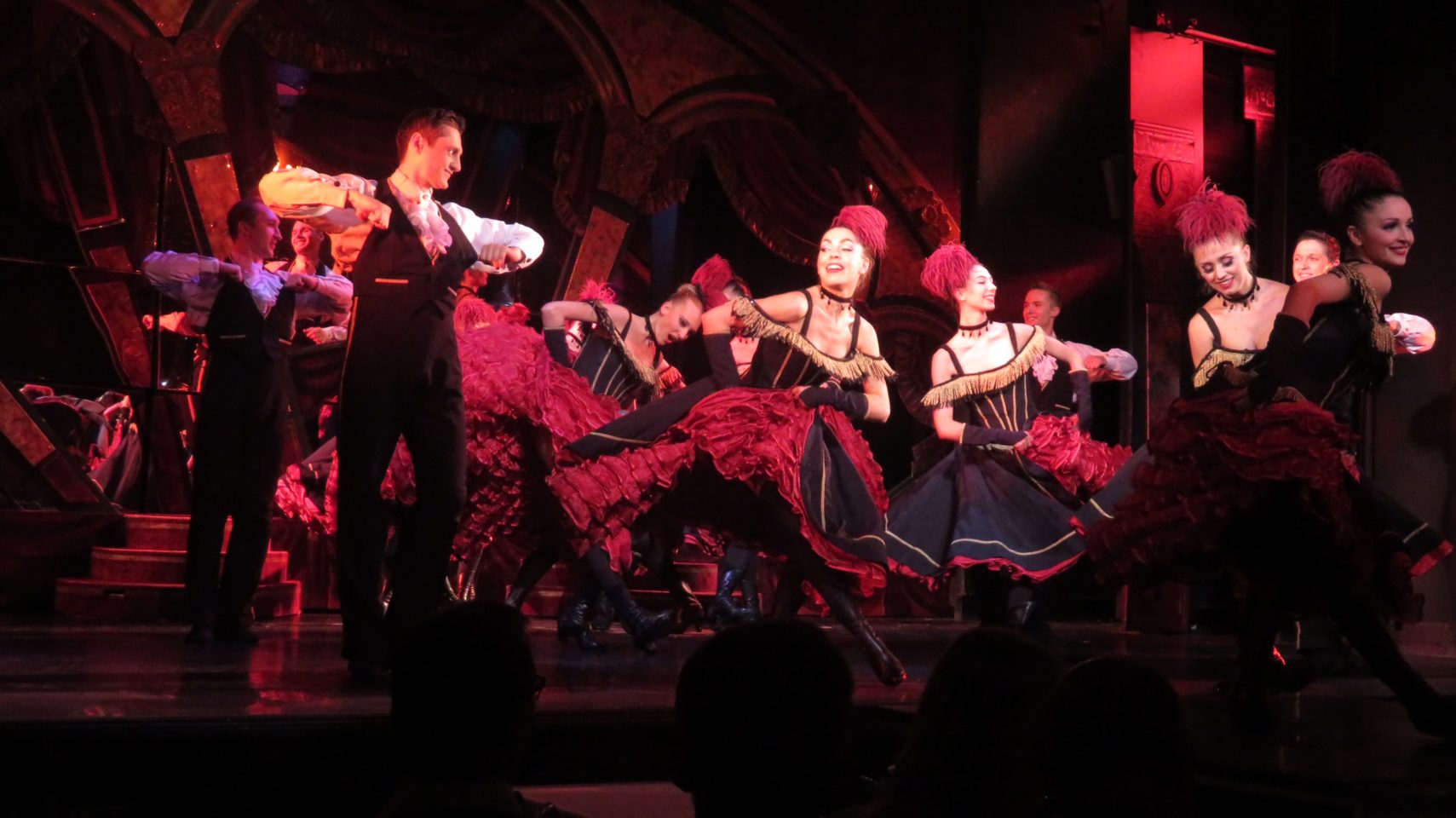 « Oyster Box Hotel in South Africa … Memorable in Most Every Way
Start or Finish your Alaska Cruise Tour on land! »