During a spring weekend jaunt to NYC, we finished our 3-day getaway with a bang in the form of a Sunday evening at Feinstein’s / 54 Below.

It all began after I saw Next to Normal on Broadway and was blown away by Aaron Tveit’s haunting performance as the son. Afterwards, I admit it: I cyber stalked him. Enjoying a YouTube video of him singing live on a small late-night stage, hamming it up with a gloriously serious rendition of a Taylor Swift song, I noticed it looked like a small club and wondered: where is he performing in NYC and how can I go there?

The answer is Feinstein’s / 54 Below, a Broadway supper club.

Warning: This review is an unabashed love note to Broadway and how Feinstein’s / 54 Below has somehow popped up at its core. If you are not the kind of traveler who struggles to decide which Broadway show to squeeze in during a NYC jaunt, then you won’t appreciate what’s to follow!

Feinstein’s / 54 Below is the brainchild of four seasoned Broadway producers, whose vision was to turn the remnants of a 1920s speakeasy, now a concrete basement, into a modern sleek nightclub where they would want to go on their nights off. The design is by John Lee Beatty, a Tony award-winning set designer, and I was told the lighting and sound systems were also done by the best of the best on Broadway.  The end result is an outstanding nightclub which offers a calendar of solo cabaret acts, tribute shows, and themed revues, all primarily sourced from Broadway talent. 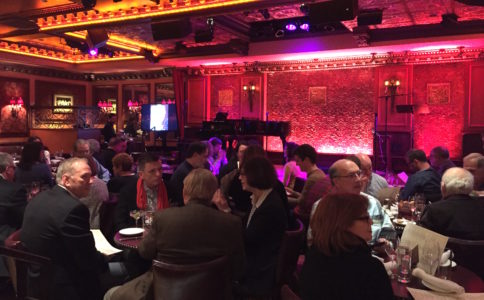 The interior design of Feinstein’s / 54 Below

When I called to make a reservation for their Sondheim Unplugged revue show, I hesitated. You never know if a concept like this will be kitschy Disney World-meets-Broadway or just “large-venue” bland. What if it is a bore? Yet another NYC tourist trap?

Boy, was I wrong.

We arrive at 54th & 8th, just a few blocks off Broadway, in front of a nondescript door in the midst of scaffolding. We open the door and, magically, the scene transforms. It’s like a secret world reveals itself. We walk down the formal staircase, amidst burgundy wallpaper and wood tones, to the foyer. A hostess greets us warmly and Justin passes my coat to the dolled-up coat-check gal (I wonder if I am in a 1950s Marilyn Monroe film or a 1920s Parisian club). The hostess walks us to our seats: a comfy leather booth in the back.  Although we are over an hour in advance of the show, the place is already buzzing. 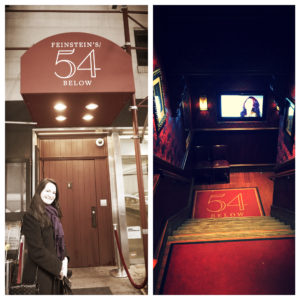 The entrance down to 54 Below 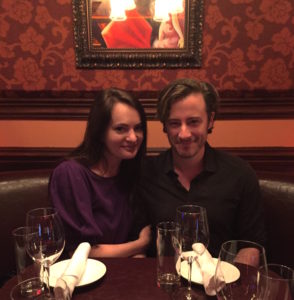 Us in our own private booth

TIP: We highly recommend asking for a booth, a “premium” seating, even above the front row “ringside” tables. They are very comfy, give you lots of personal space, and offer the best view.

Just a note: I am a little bit like a kid-in-a-candy-store about the evening. I am a huge Sondheim fan, and thoroughly believe in his genius.  I still remember being taken as a little girl by my grandmother to see the original cast of Into the Woods on Broadway.  Apparently, Sondheim Unplugged at Feinstein’s / 54 Below is run by another Sondheim fan, Phil Geoffrey Bond, who works incredibly hard to bring in a variety of Broadway greats to sing Sondheim together over the evening.  Interspersed with the music, he shares trivia, history and jokes about Sondheim.

We have no idea who is on the docket for tonight, or what songs are in store, but we keep pinching each other excitedly as, with no effort to disguise their personas, Broadway actors and actresses stroll in and grab a drink at the bar, including Pamela Winslow, the original Rapunzel from Into the Woods. One group even takes over the booth next to us — kissing hellos, comparing notes on their current shows, they bundle together in the booth chatting and laughing. I unabashedly try to overhear their conversation, totally dazzled. Miss Manners would not approve.

We finally look down to focus on the menu and immediately look up to flag our waiter: I am attracted to too many options to decide (not a usual occurrence for me). The menu is very nicely done, balancing American classics with a touch of French bistro favorites, and the dishes designed for light snacking are as equally appealing as the hearty entrees.  I give kudos and many, many thanks to Executive Chef Lynn Bound, who not only precedes to spoils us, but also delivers with her craft: the dishes we sample – from appetizers down to desserts – are delicious and satisfying. 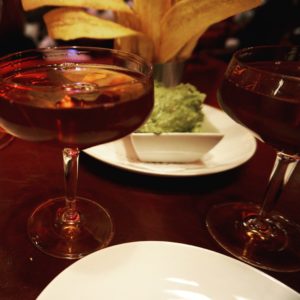 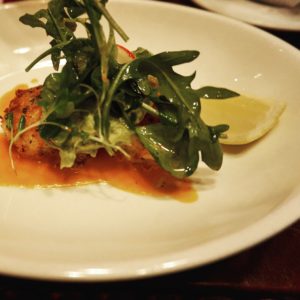 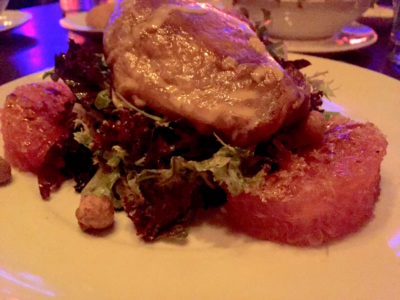 TIP: You typically do not expect to go to a music club to derive pleasure from the meal, but it would be a mistake to eat a dinner in advance of going to Feinstein’s / 54 Below – arrive early and enjoy a dinner there. Entrees are all under $30 and they offer a lovely 3-course prix fixe for $64. We also highly recommend their short ribs and espresso-marinated steak frites.

As we munch, murmur, and eavesdrop away, the lights fall and the show begins. One by one, performers casually put down their drinks and step onstage. One by one, Broadway headliners from a range of shows serenade us – all for the price of one ticket.  Being Alive…Ladies Who Lunch…Move On…Send in the Clowns.  The waiters discretely fly by, topping drinks, serving dessert, as we sit back contented, letting the music circle us in happy waves. Get a taste here. 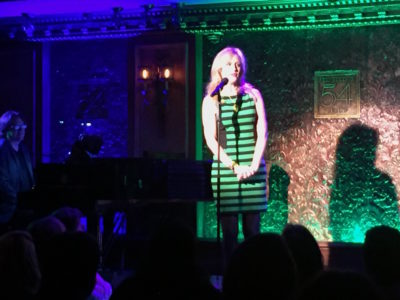 Pamela Winslow, the original Rapunzel of Into the Woods, singing Giants In The Sky

TIP: If you can, go to Feinstein’s / 54 Below on a Sunday or Monday night when Broadway theaters are closed. You may just catch a current star on his/her night off.

Sitting in Feinstein’s / 54 Below, we feel like we have slipped, Alice in Wonderland-style, into the backstage of Broadway. Experiencing the talent of Broadway at Feinstein’s / 54 Below is a wonderful counterpoint to watching them in all their glory on the Broadway stage. It’s vastly more intimate, slightly more casual, and perfectly OK to drink and eat to your heart’s content during the show. My kind of place.

TIP: If you are lucky enough to live in NYC and swing by Feinstein’s / 54 Below more regularly than us out-of-towners, consider joining Club 54, their membership program. I would definitely be racking up those points easily.

* Want to read more about our spring weekend in NYC? Go here to skim through the full itinerary.