BASEL, for the love of Art, History, & Gastronomy 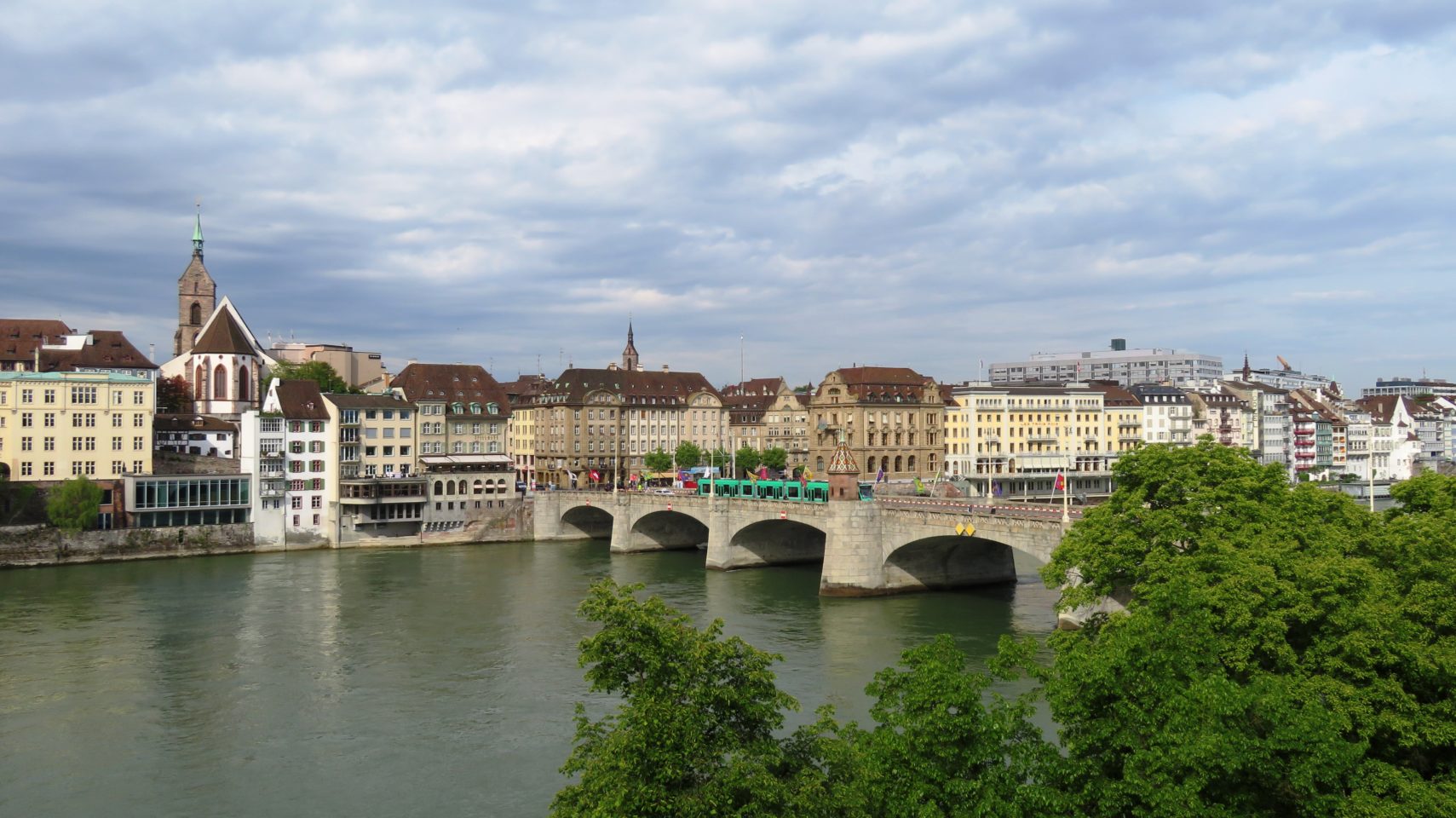 For years the Swiss city of Basel has been closely associated in my mind with two famous and fabulous exports, Art Basel and Roger Federer.  If you are an art connoisseur, you know of the first export, and if you love tennis, you are for sure a fan of Federer. 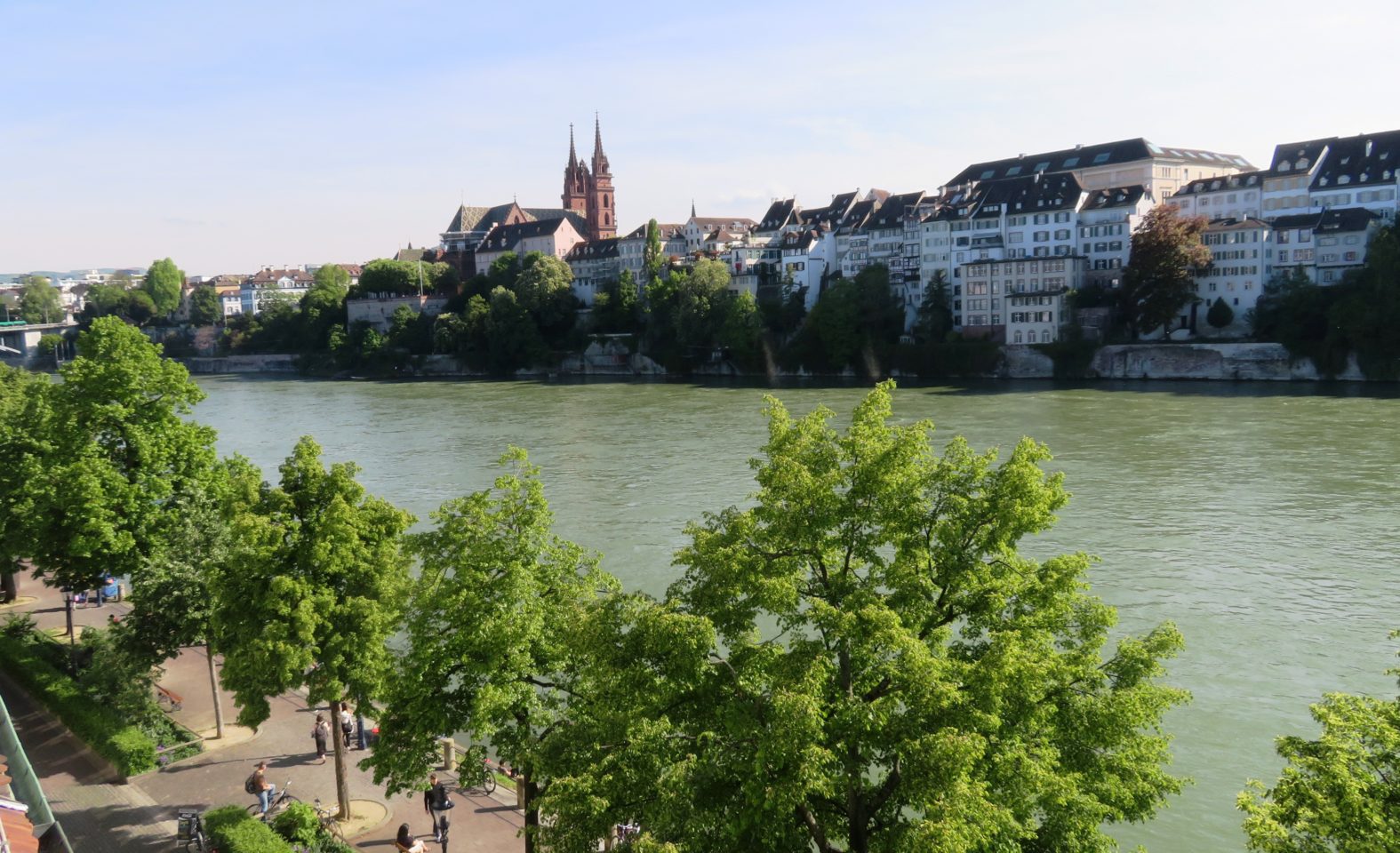 The University of Basel along the Rhine, Basel, Switzerland

Now, after having spent four delightful days in this charming, historic city, I would highly recommend you put Basel on your Swiss itinerary and certainly include it in either a pre- or post-Rhine River cruise visit since the Rhine cruises either depart or terminate in Basel: Early Summer on the Rhine with AmaWaterways 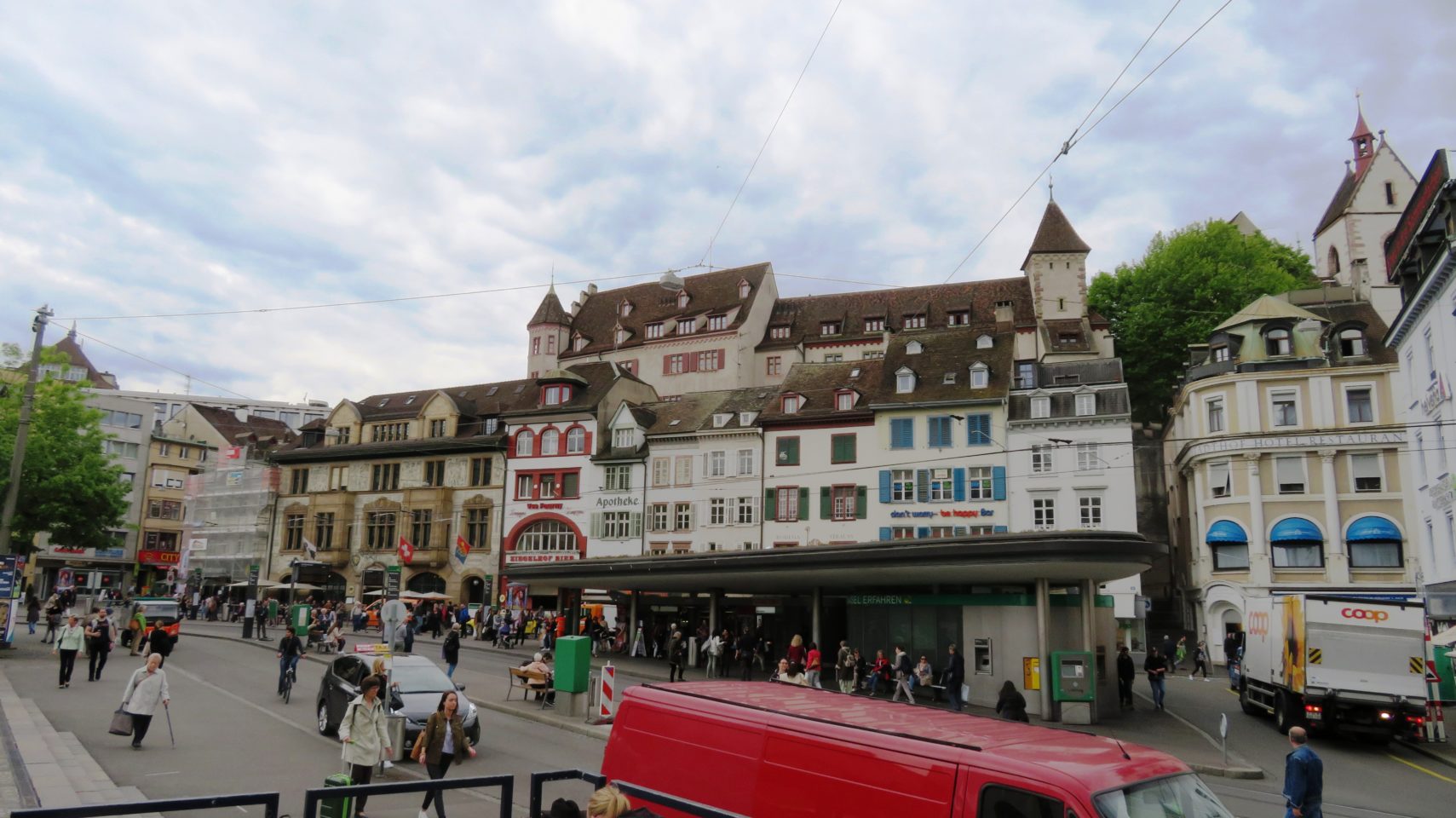 What is it about Basel  that has inspired me to recommend it so highly?  After all, we’re talking about a city in Switzerland, a country renowned for its spectacular alpine towns and villages, the elegant and sophisticated cities of Geneva and Zurich, the gorgeous university town of Neuchâtel where I lived in pension for the summer after my freshman year, the picturesque resort towns of Montreux and Lucerne, and the list goes on … 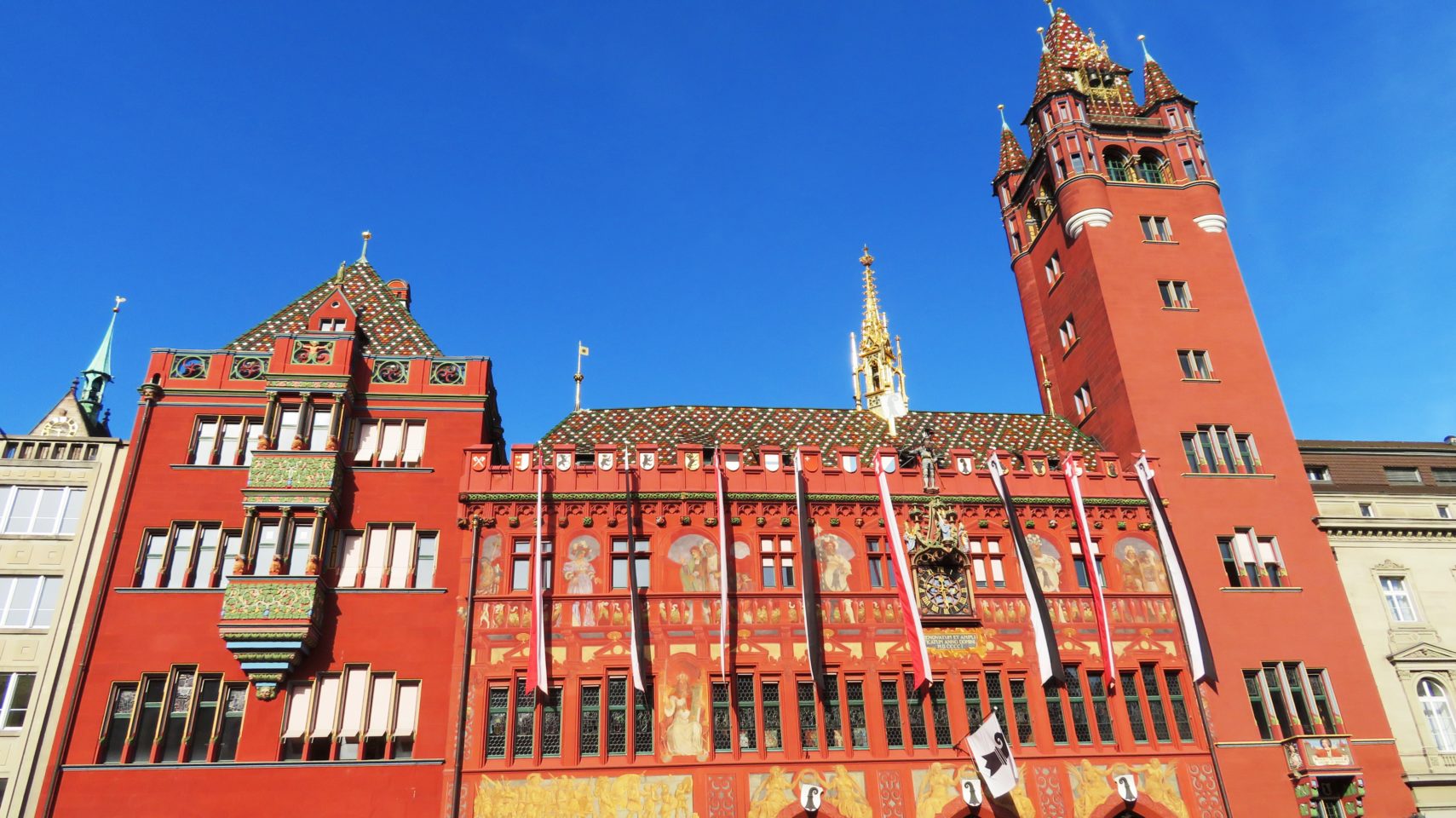 But why Basel?  Because first of all, it is the quintessential Swiss walking city.  You can easily walk through the heart of this city admiring the 12th century Gothic cathedral where the tomb of the scholar Erasmus lies, the medieval town center around the Marktplatz, the large and exquisitely maintained homes in the city’s residential neighborhoods of which there are a quite a few, and the city’s upscale boutiques if you are so inclined.  We had a marvelous tour guide who took us around, providing us with a superb lecture in the history and art of Basel and answering all our questions. 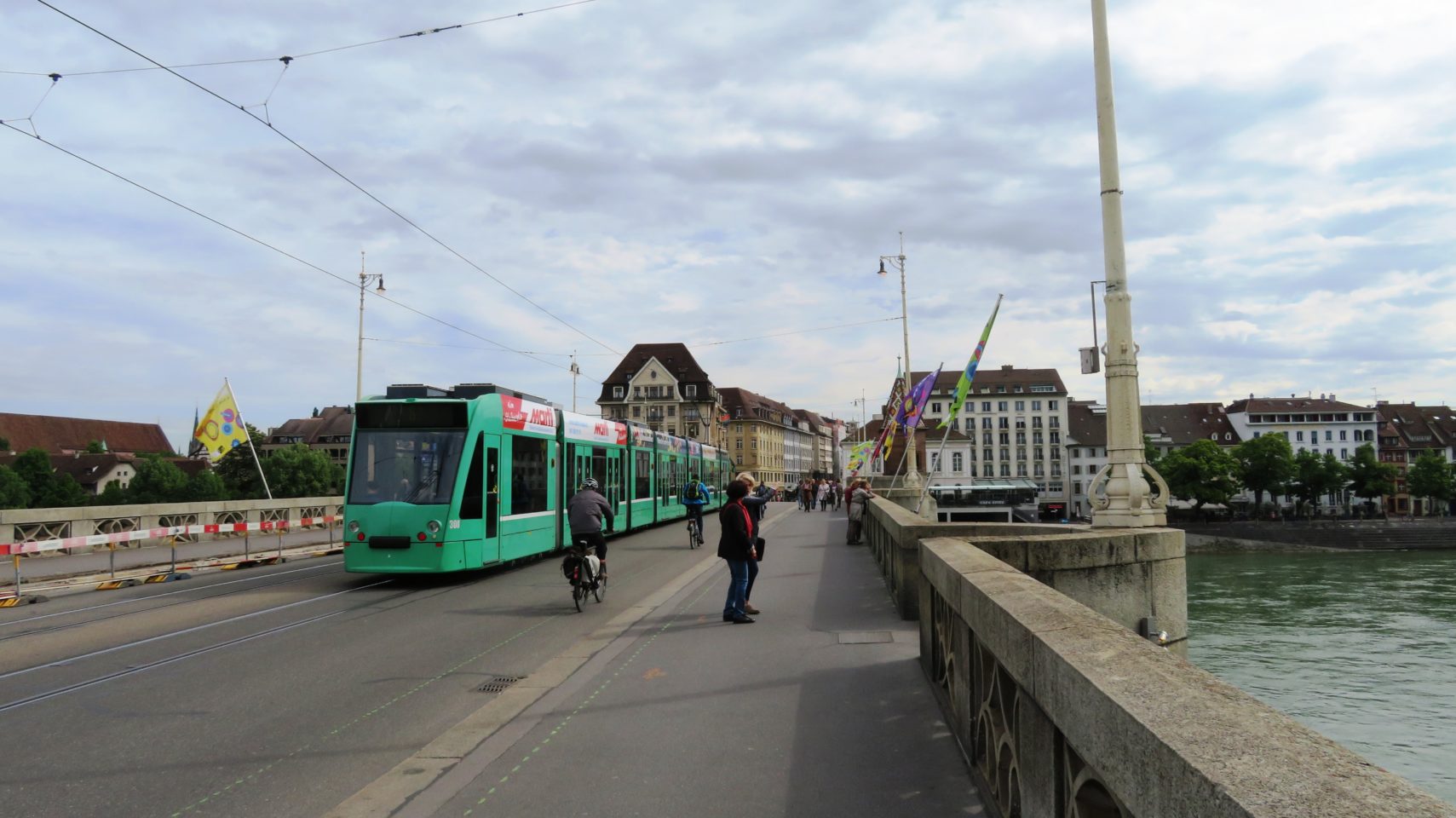 Tram on the Mittlere Brucke in Basel, Switzerland

If you get tired, or you want to venture outside the heart of the city, you can just hop on the very comfortable and modern tram to take you where you need to go.  After all, this is Switzerland, and if you don’t speak German or French, chances are many of the locals wherever you go will be happy to give you directions or information in English. 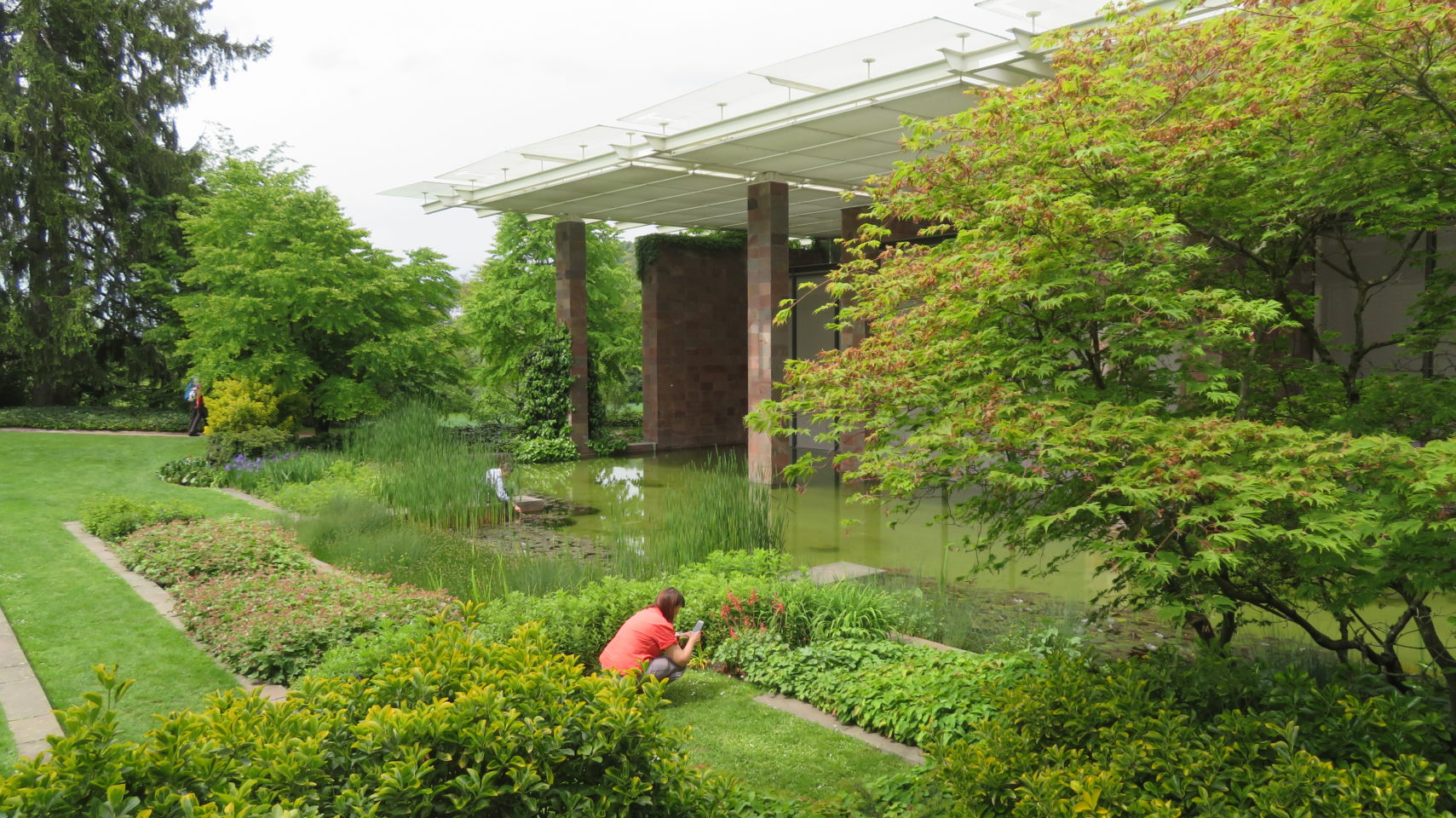 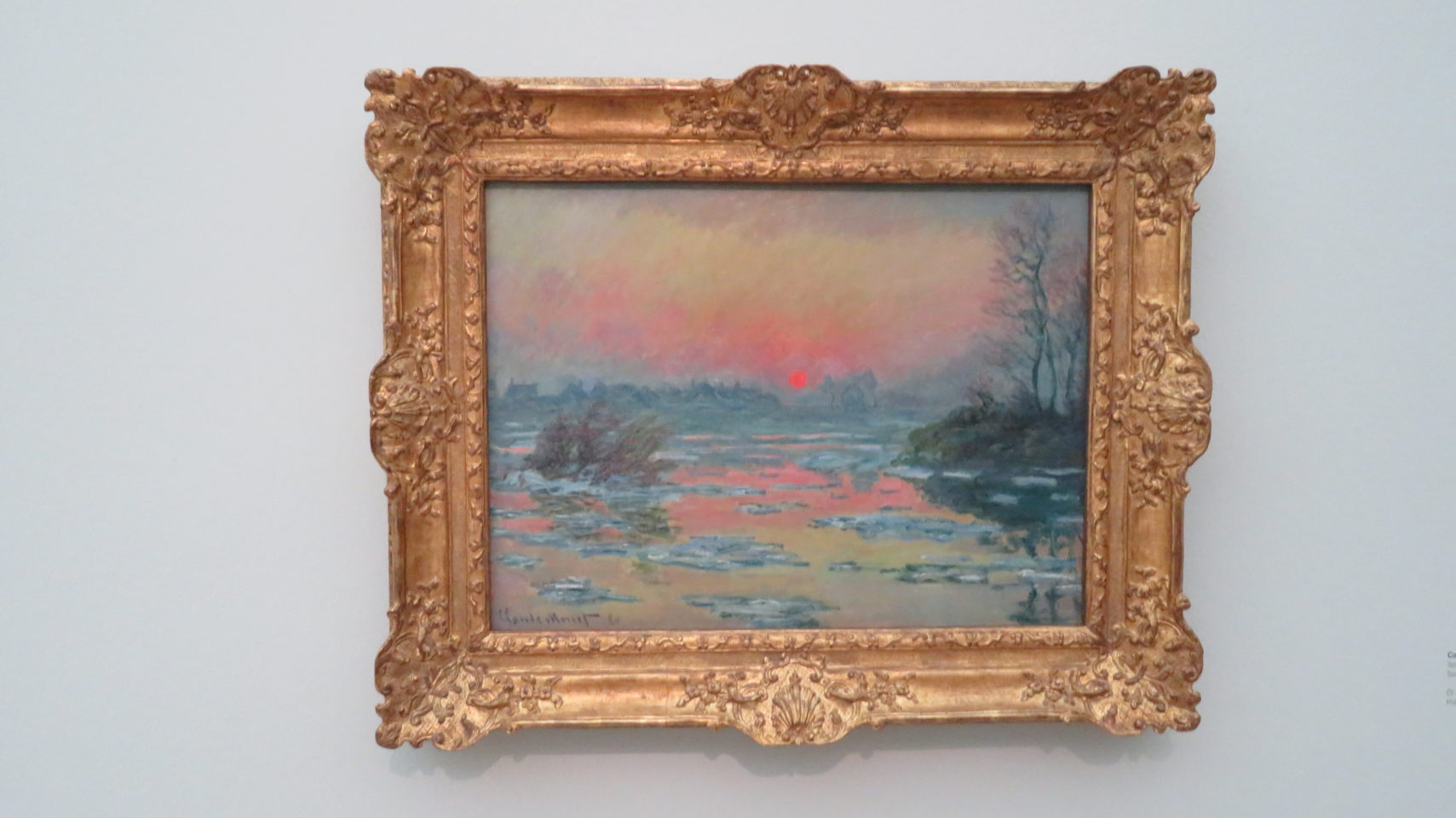 Initially attracted by the temporary Monet exhibition celebrating the impressionist’s fascination with light and color, we also enjoyed visiting the museum’s permanent collection which covers the second half of the 19th century up until the present. 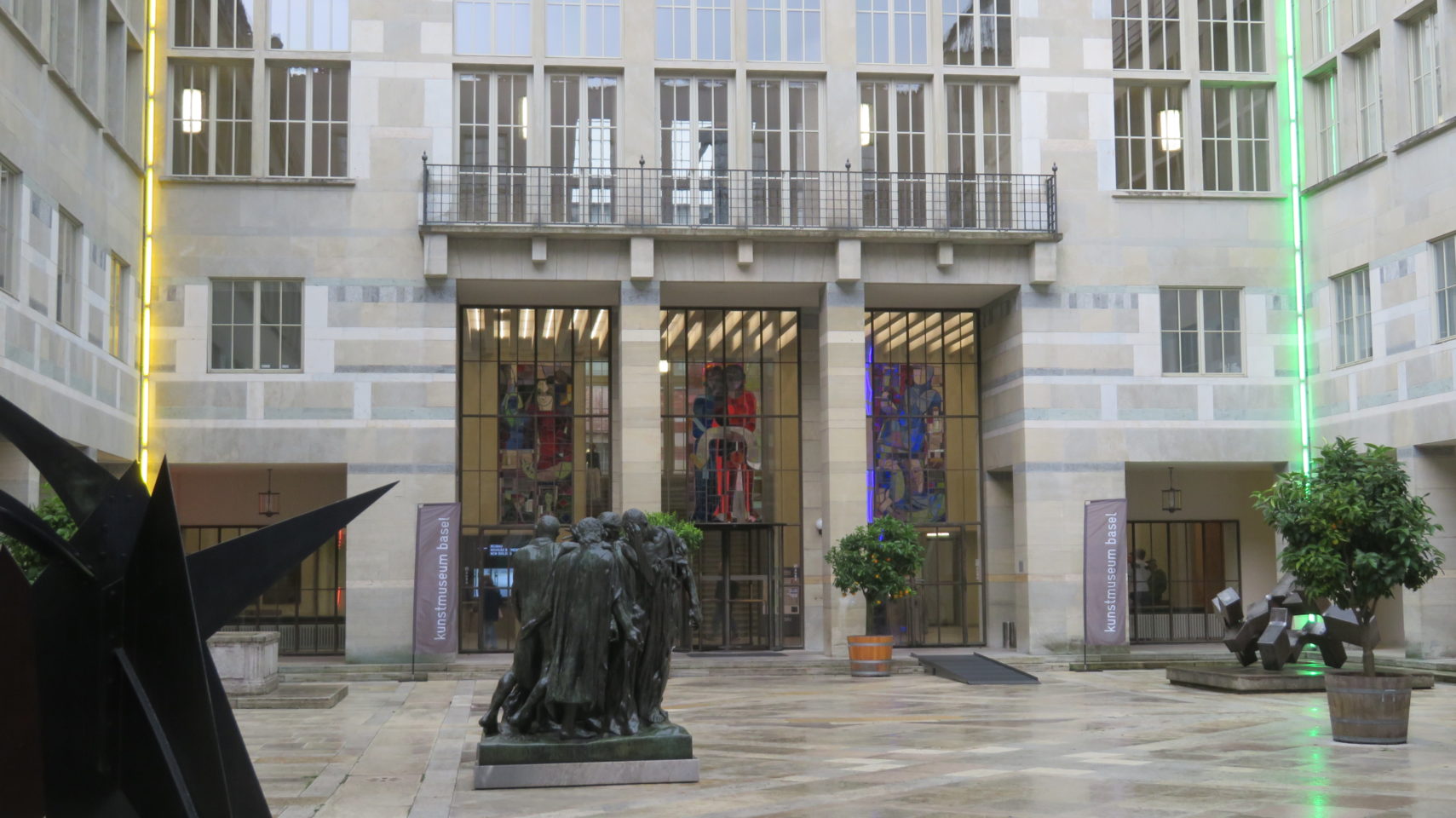 And this brings me to my second key feature about Basel … this city lives and breathes its art, from its outstanding art museums, such as the Fondation Beyeler in the city suburbs to the Kunstmuseum in the heart of Basel with its fabulous collection of Rodin sculptures and works by Van Gogh, Monet, Gauguin, Picasso and so many more… 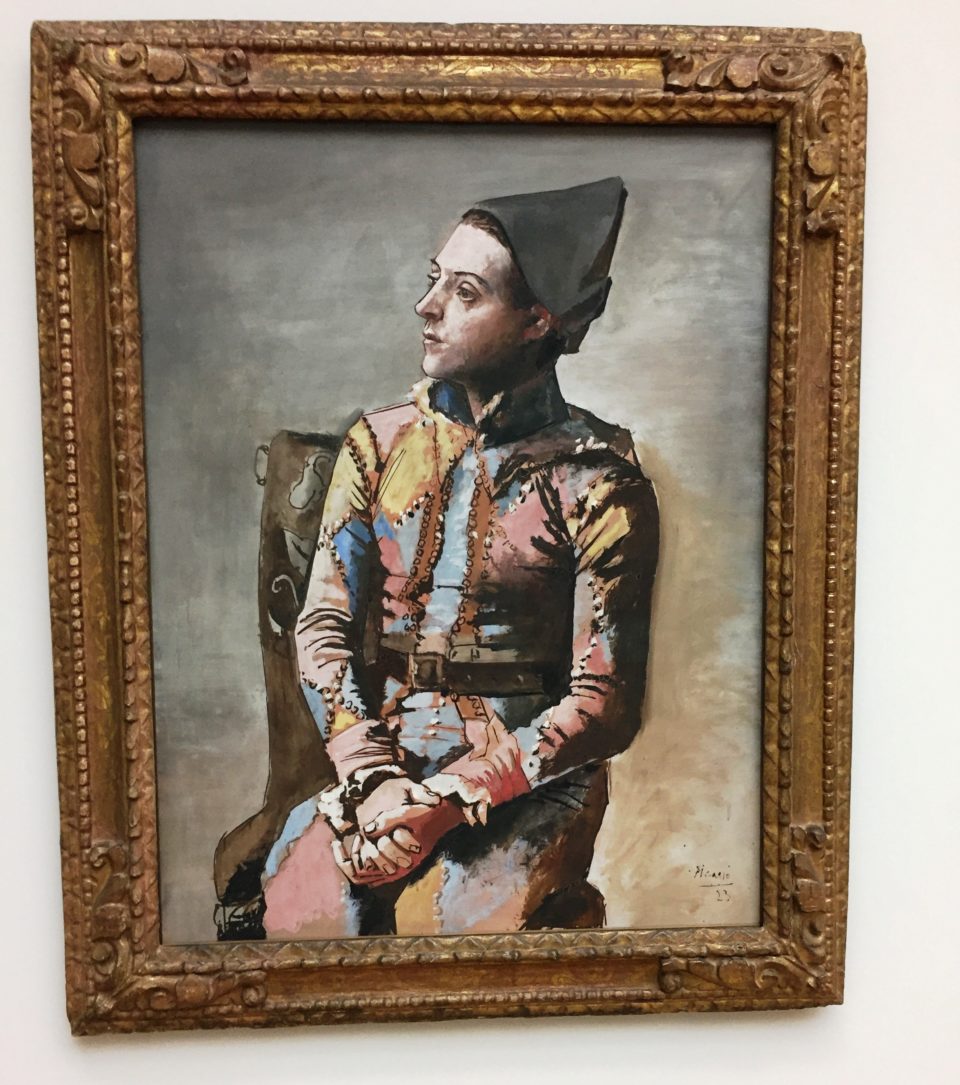 Seated Harlequin by Pablo Picasso at the KunstMuseum in Basel, Switzerland

In fact, not too surprisingly, this imposing museum, developed from one of the first art collections to be made accessible to the general public, is reputed to house the largest and most important public art collection in Switzerland. 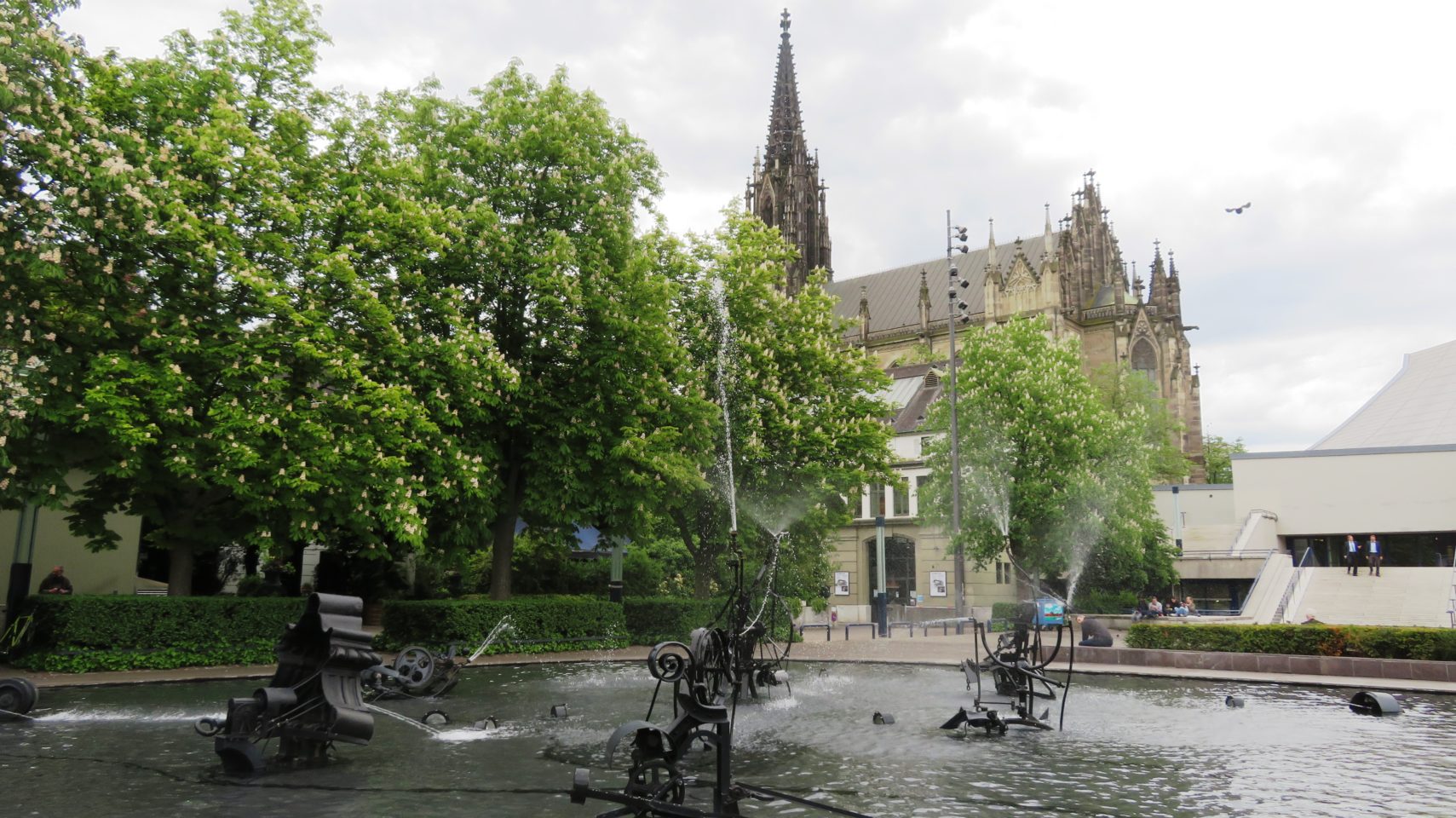 Carnival Fountain by Tinguely in TheaterPlatz in Basel, Switzerland

If a light is beginning to dawn that Basel might just be a city for art lovers, you would be oh so right.  Remember that Basel, home to 37 museums, engendered Art Basel, considered the world’s leading international art fair with shows held annually in Basel as well as Miami Beach and Hong Kong.  Each of these three art fairs showcases contemporary art by established as well as emerging artists.  The organization of the art fairs and the opportunities to discover new trends in the art world and to purchase exciting new contemporary art at an Art Basel show are simply spectacular. 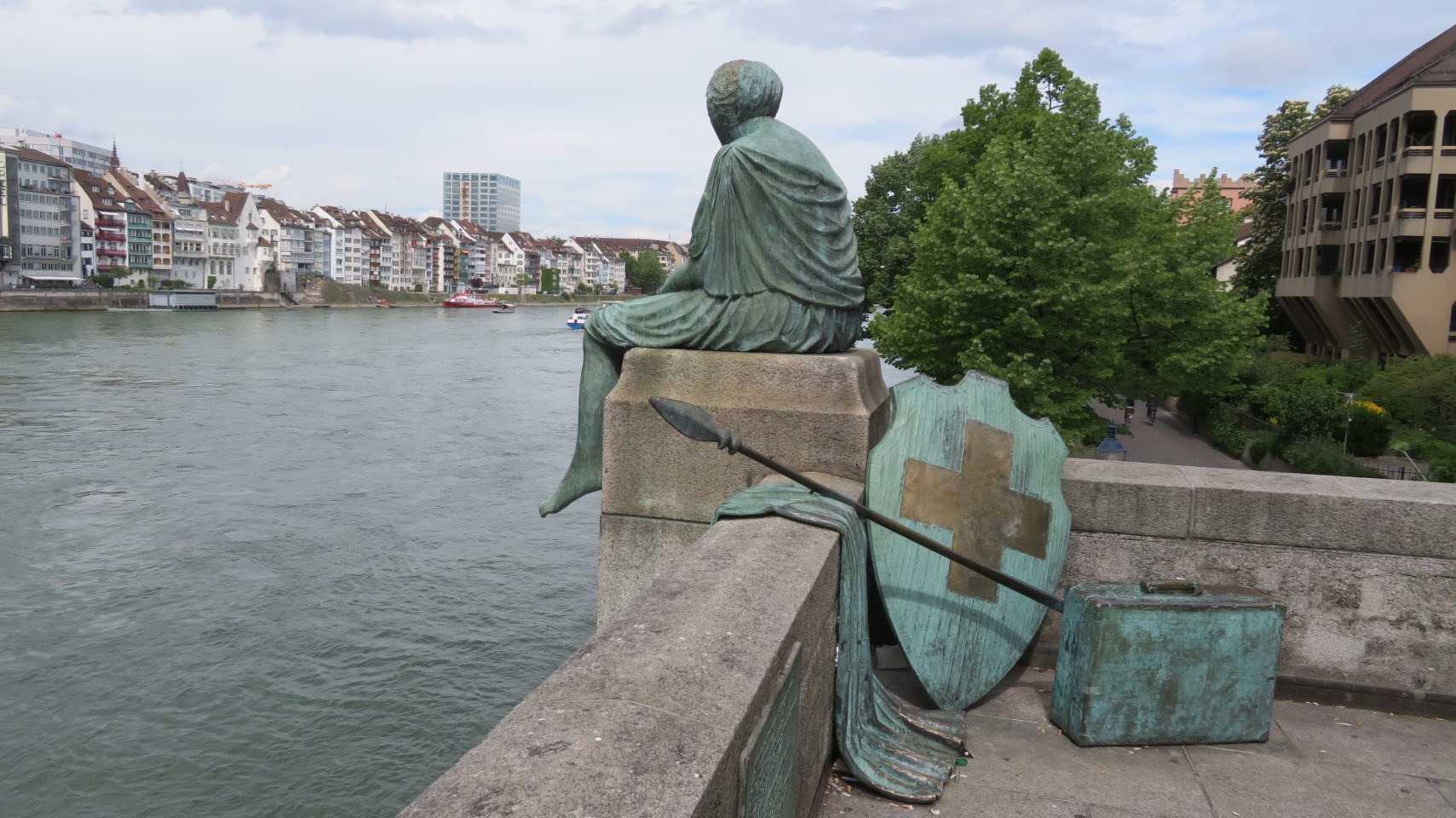 The same devotion to art and human creation exemplifies Basel’s awesome “Art in the City” walking tour.  Denis and I spent more than half a day following the map of the 25 pieces of unique and innovative “artwork in the public domain” which help humanize and beautify the already stunning city of Basel.  From the imposing yet relaxing Carnival Fountain of Basel’s famous artist, Jean Tinguely, to the heroic Helvetia on the Journey by Bettina Eichin, Art in the City is a concept that I think should spread world-wide.  But it takes a certain kind of city to pull this off successfully.  As the director of Basel Tourism says, “There is an art to having so much art.” 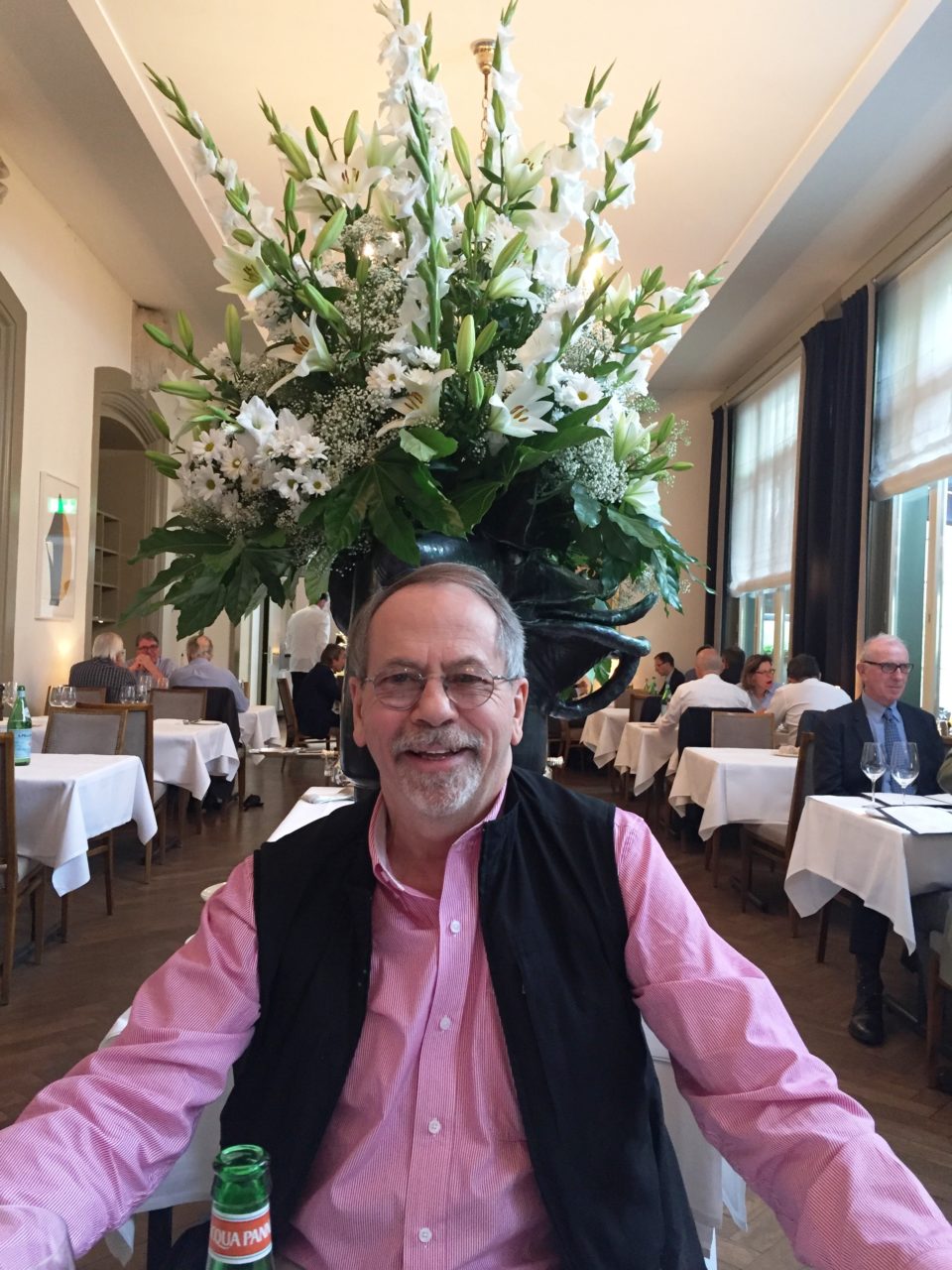 Denis at the KunstHalle Restaurant in Basel, Switzerland

A third key feature which excites me about Basel is the food scene.  While the regional focus tends to be a very attractive mixture of traditional and innovative French or German, you can find a whole variety of ethnic cuisine in today’s Basel reflecting the 21st century population of the city.  When we travel, however, we always aim for the local specialties and the restaurants with long-standing traditions. 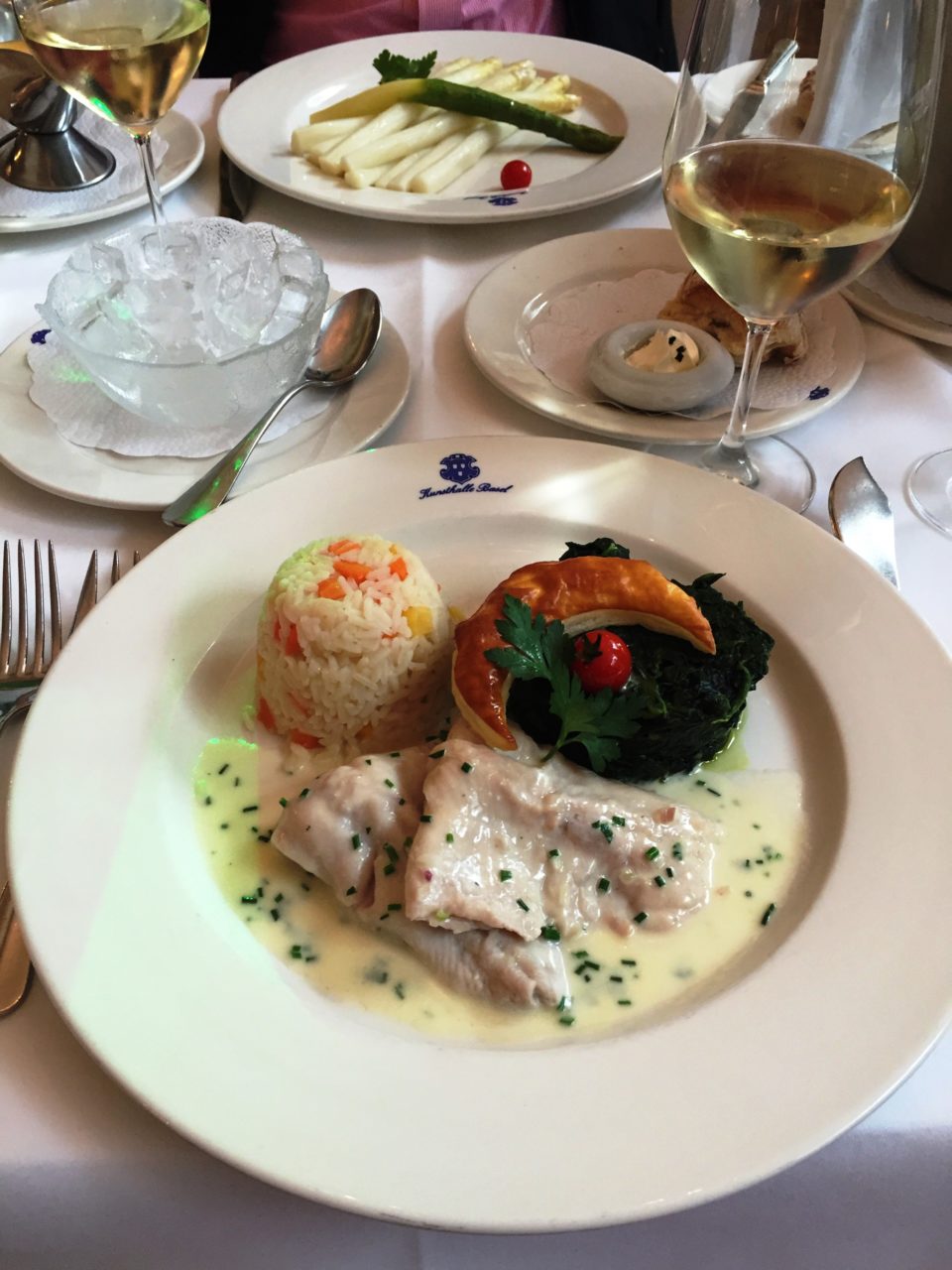 Exquisitely fresh line fish for lunch at the KunstHalle Restaurant in Basel, Switzerland

All our meals in Basel were delicious, but most outstanding were dinner we at the Hotel Krafft, the historic hotel were we stayed along the Rhine, lunch at the Restaurant Kunsthalle in the theatre district, and dinner at Les Trois Rois, an elegant old hotel also situated along the Rhine. 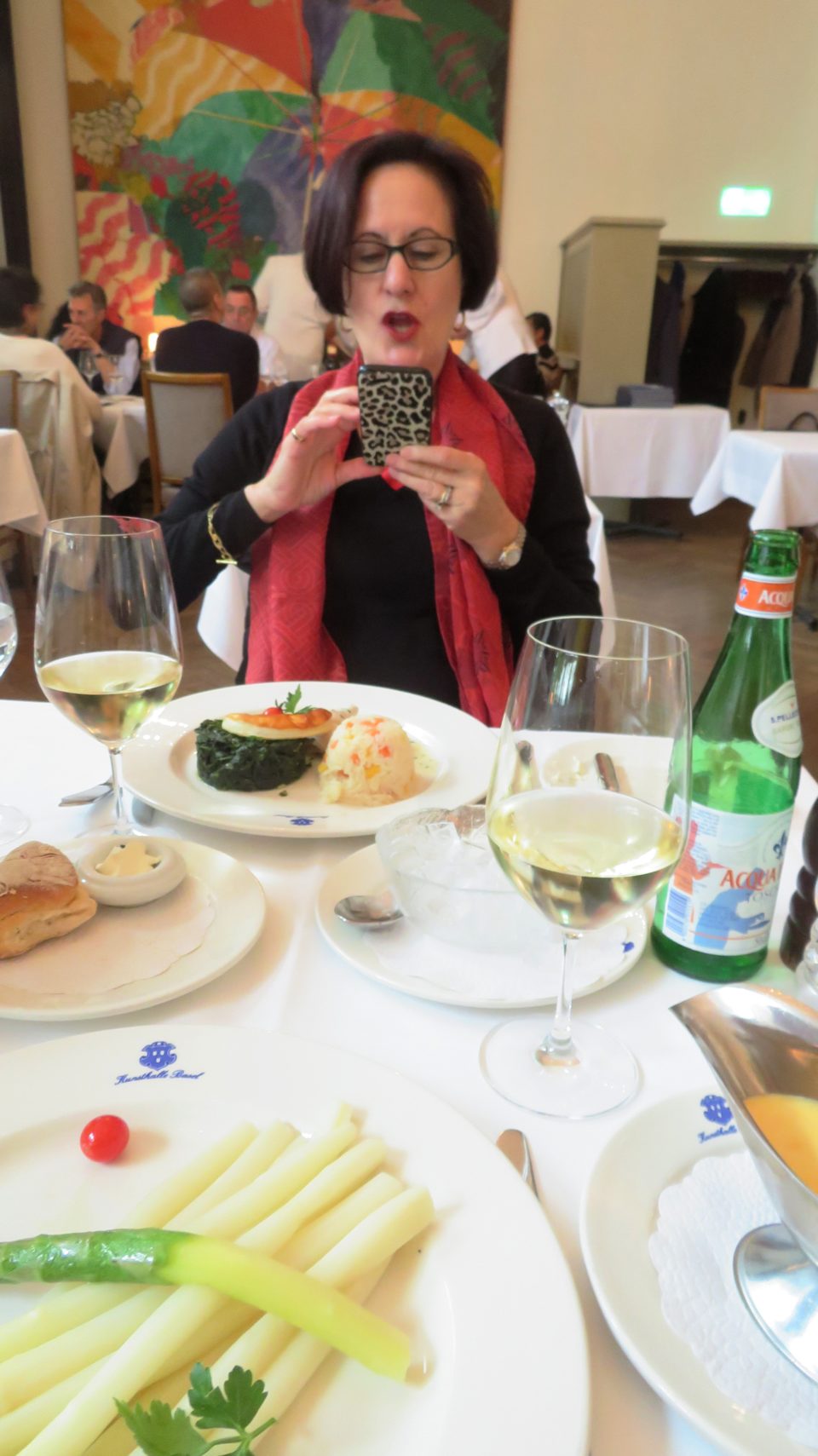 Lynn having a great time at the KunstHalle Restaurant in Basel, Switzerland

Among my favorite dishes in Basel were the magnificent white asparagus very much in season, the superb soups, the fish dishes prepared specially to enhance the freshness of the local fish, and the veal … a definite specialty of Switzerland.  And let’s not forget the Swiss desserts. 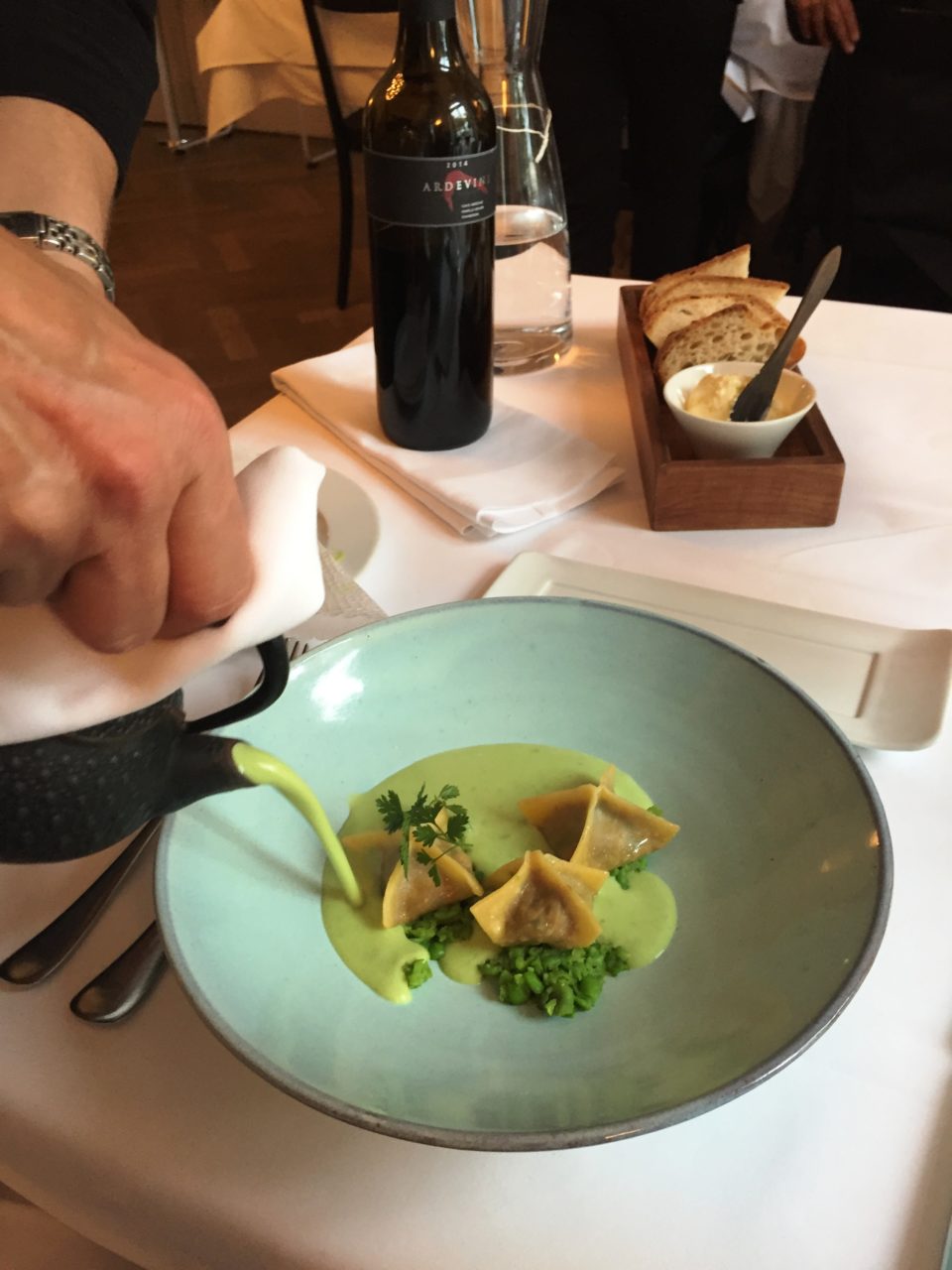 Pea Soup with home-made Ravioli at the Hotel Krafft Restaurant in Basel, Switzerland

From traditional to deconstructed, I’m game to try most any dessert offered in Switzerland, especially if dark chocolate is a part of the experience! 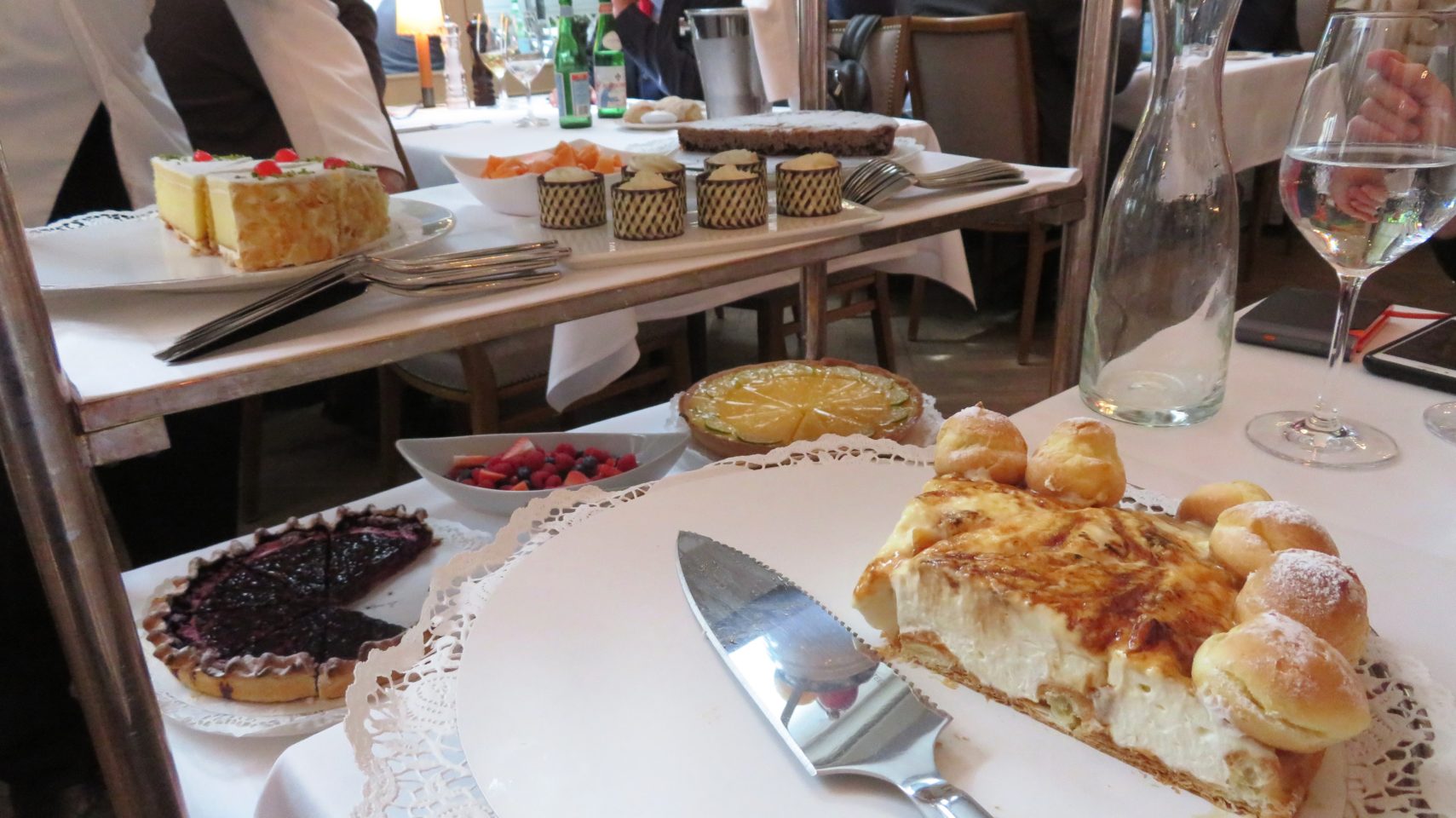 An elegant array of desserts at the KunstHalle Restaurant in Basel, Switzerland 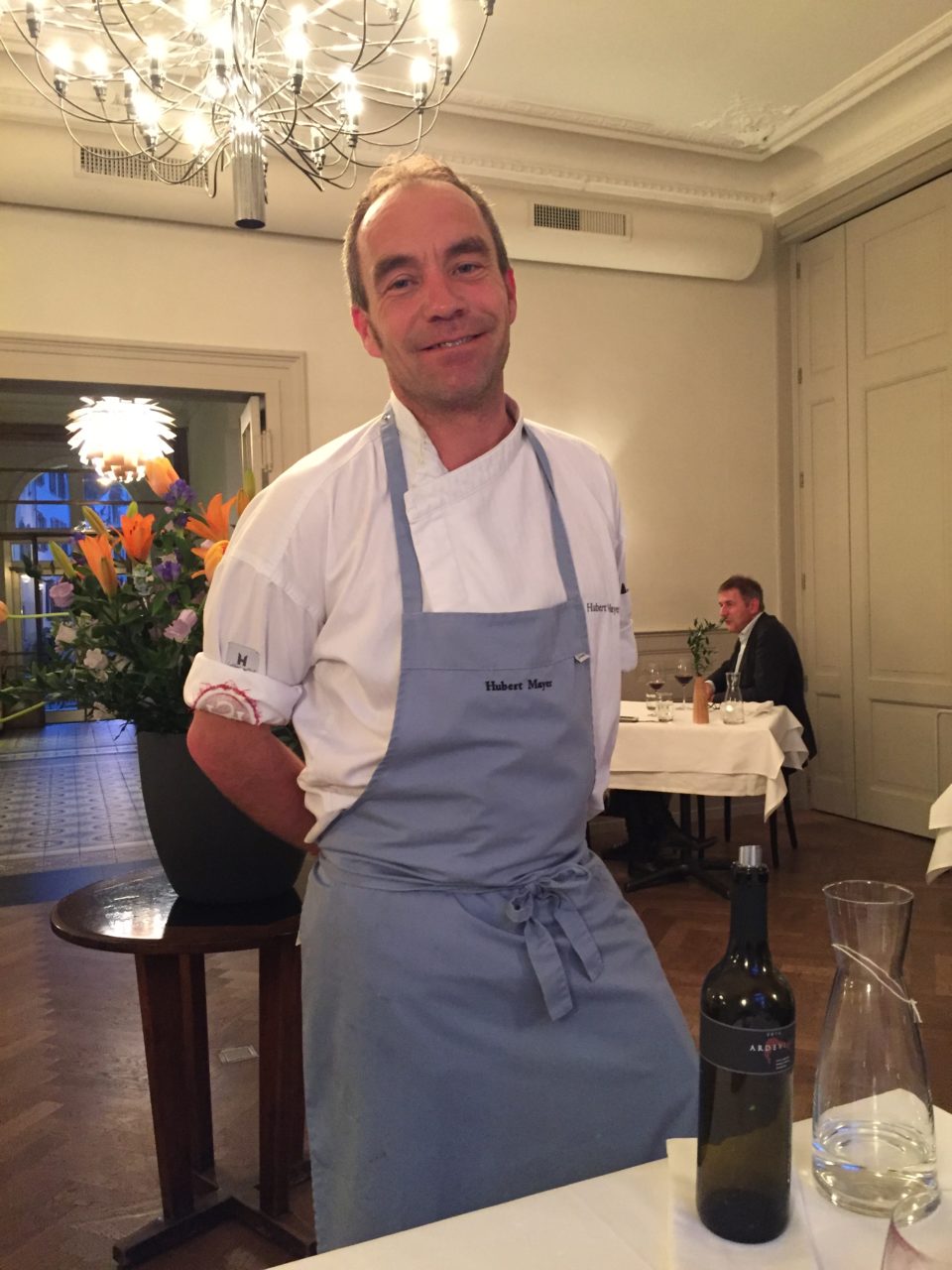 Finally, the University of Basel is an imposing feature of the city.  Founded in 1460, it is the oldest university in Switzerland and the oldest center of Humanism in the country as well.  This enlightened philosophy appears to cast a positive spell over the city of Basel where people seem to have found an ideal mixture of a dedicated work ethic and a joie de vivre that makes their city a true pleasure to visit. 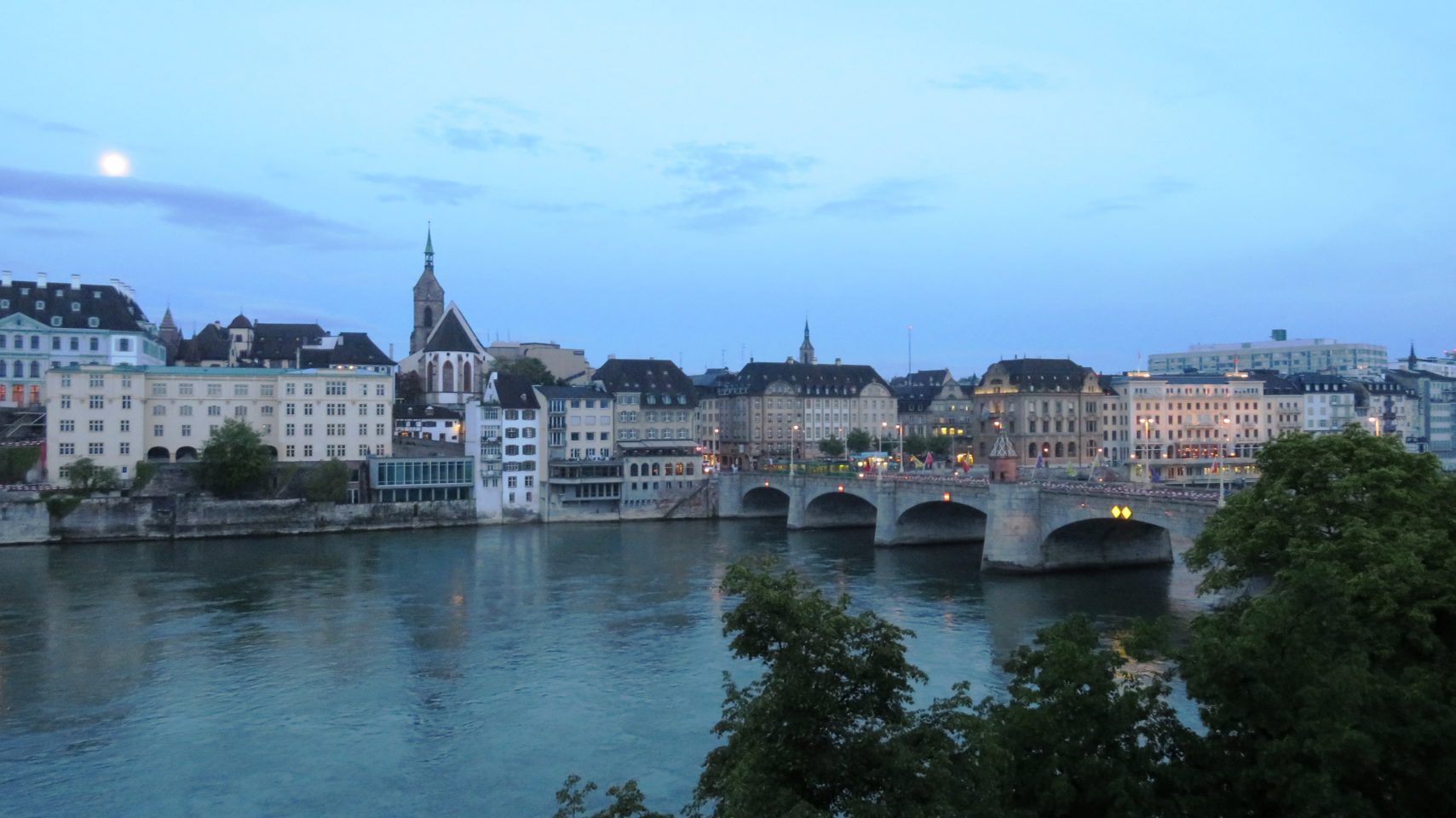 Many thanks to Basel Tourism for a fascinating visit!