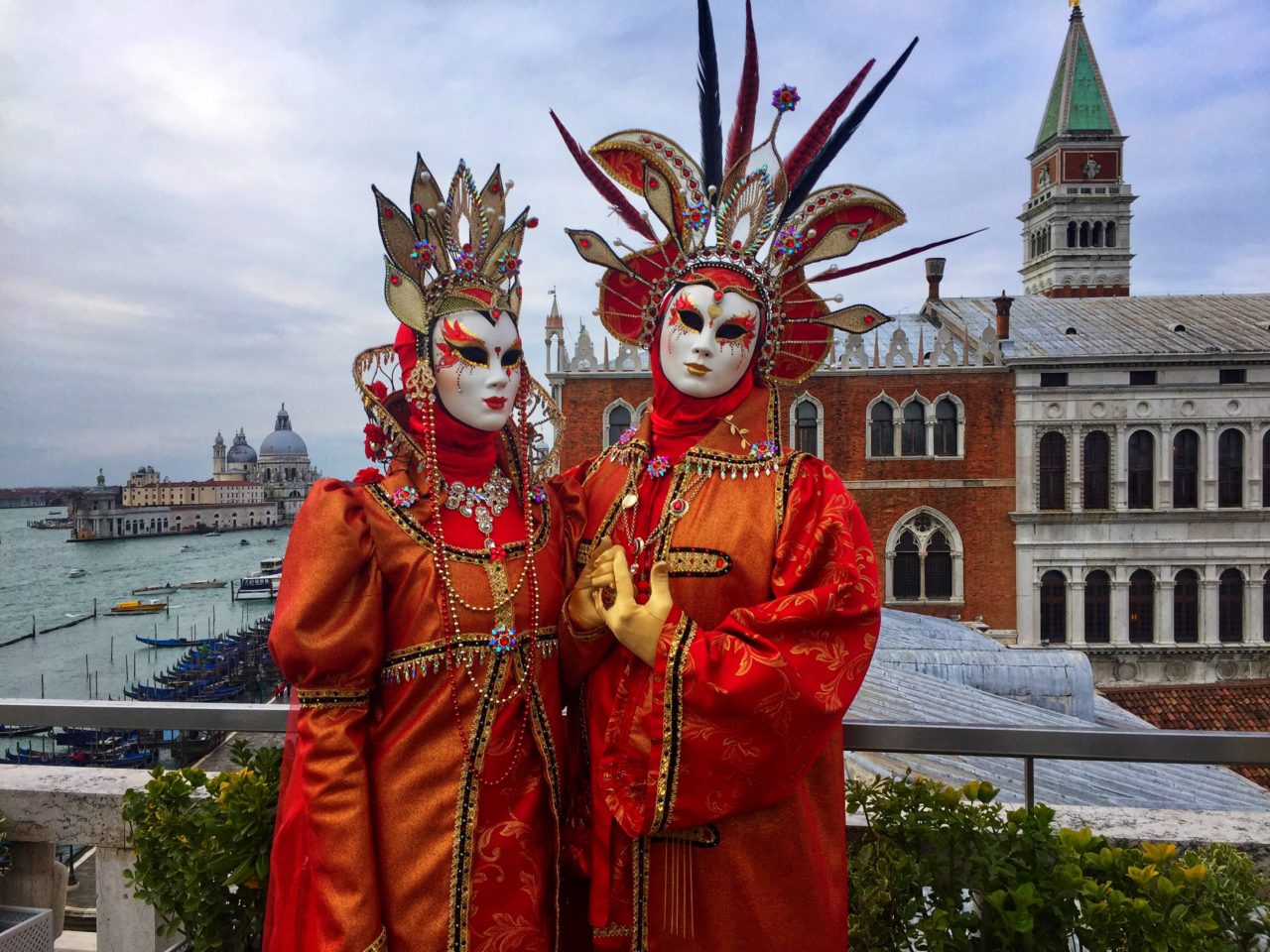 Venice at Carnival time ~ Simply Magical !  The stunning view of the Grand Canal from the Terrazza of Ristorante Terrazza Daniele

I first visited Venice when I was 19 while traveling throughout Italy.  I was impressed by the many ancient monuments of Rome still standing and the glorious Renaissance art and architecture of Florence, but I was truly enchanted by Venice with its unique lifestyle of water travel, especially in gondolas with charming gondoliers serenading.  And how about the tradition of kissing under the Bridge of Sighs?  So very romantic!

While I’ve returned to this beguiling city quite a few times since my first visit, I’ve never been in Venice at such a poignant time as my last trip there with my husband.  Denis planned a two week stay dedicated to the enjoyment of Venice’s centuries’ old tradition of Carnevale, and this trip took my original notion of “Venetian enchantment” to another level.  Every one of our 15 days at the Carnival of Venice in February was truly magical as we walked this fascinating city amidst Venetians, Italians from all over Italy, and many adventurous foreigners dressed in some of the most dazzling costumes I have ever seen.  How do I know where people came from you wonder?  Simple, I asked them, and everybody I asked was happy to respond. 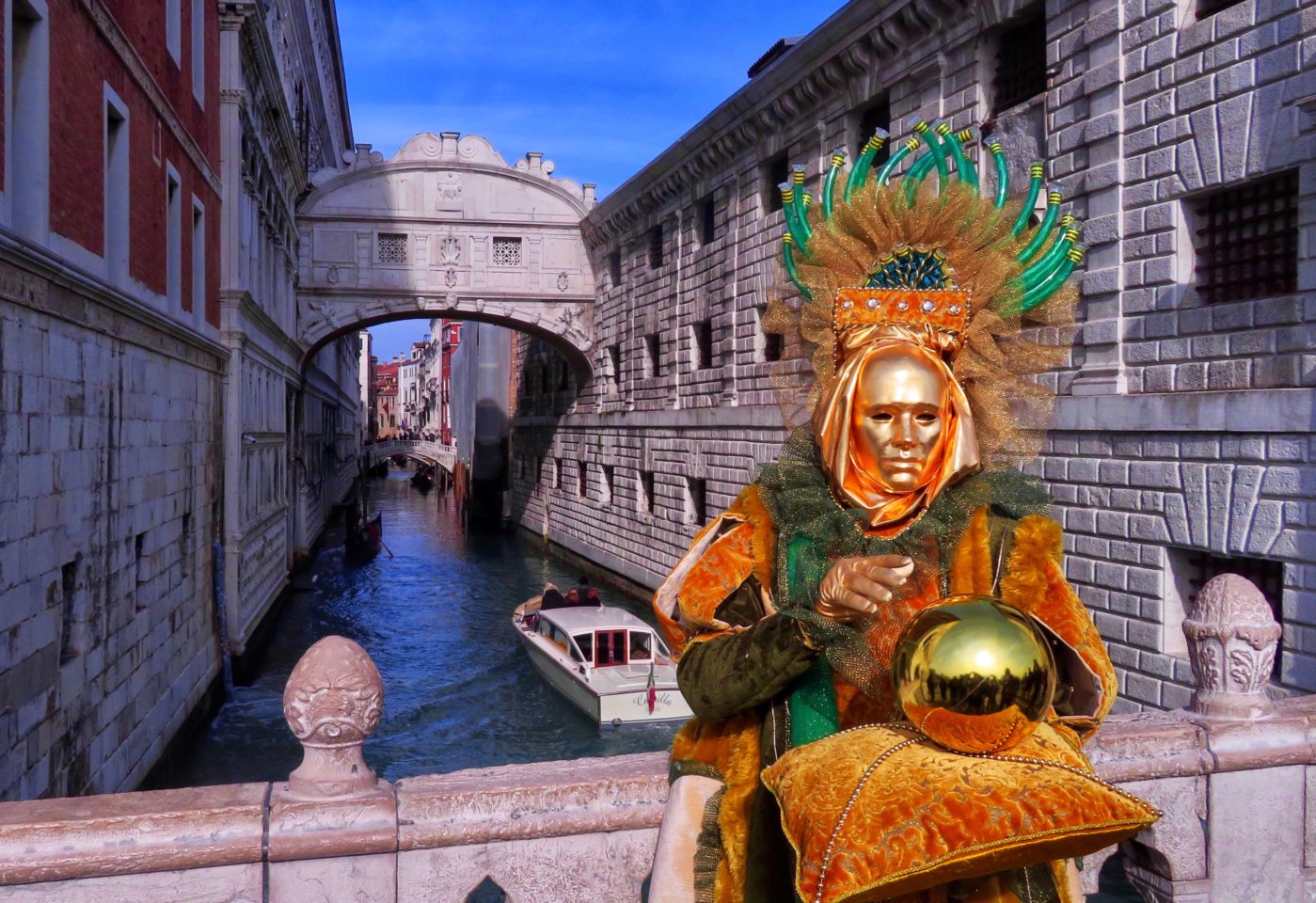 Truly stunning from head to toe, from their wigs and masks and artfully applied makeup to their splendid dress and footwear, these costumed ladies and gentlemen were fully engaged in celebrating the festival and delighted in stopping and posing most charmingly for photos.  A true feast for the eyes.  The ambiance was almost surreal, and the fascination day after day for enjoying the view, admiring the extraordinarily colorful costumes and taking photos never left me.  The pace was relaxed but the joie de vivre was infectious … no matter what we did as we toured, we enjoyed it more thanks to the Carnevale festivities and, in particular, the magnificent costumed participants strolling around in full regalia. 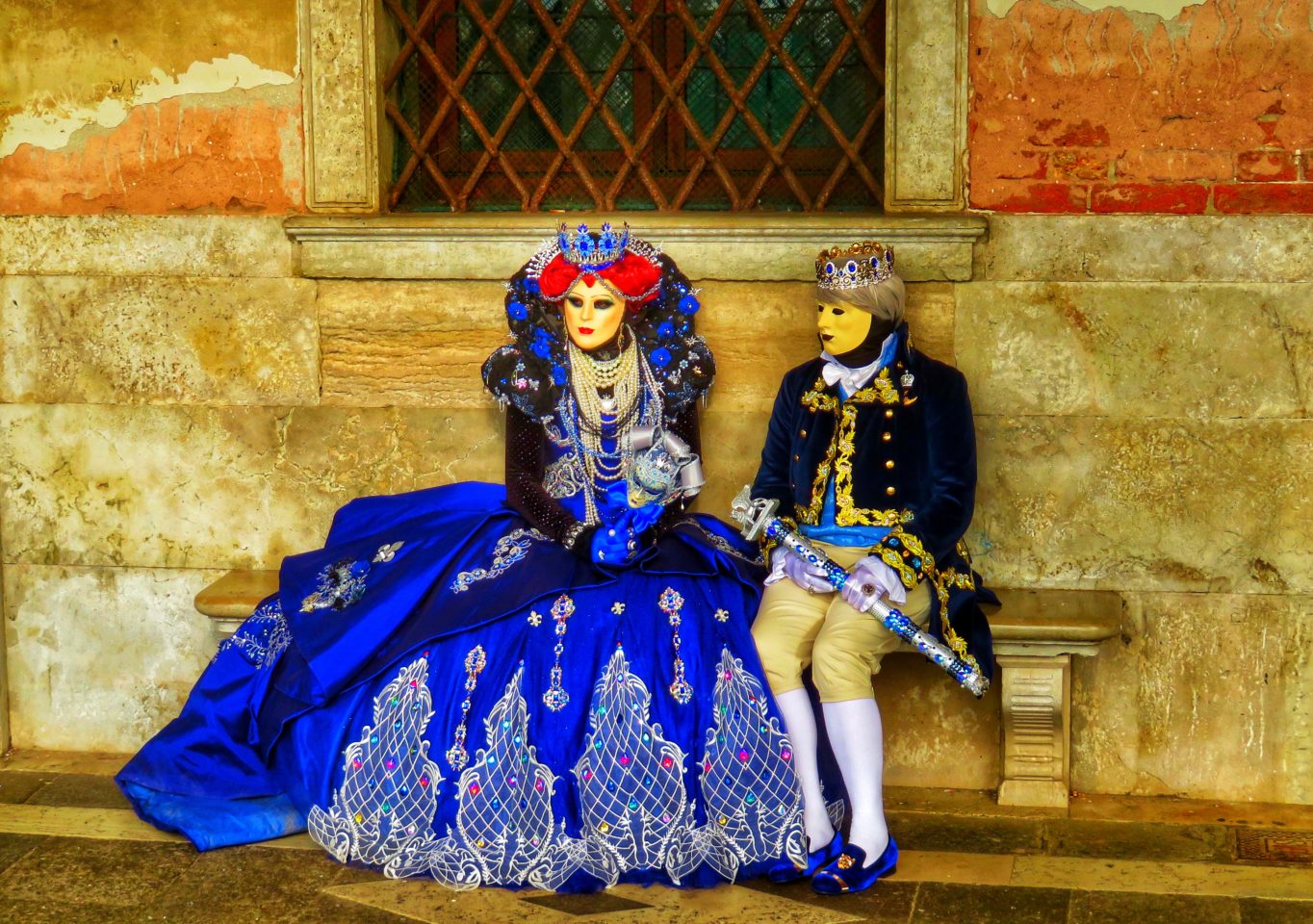 What else contributed to the “enchantment” of Venice? 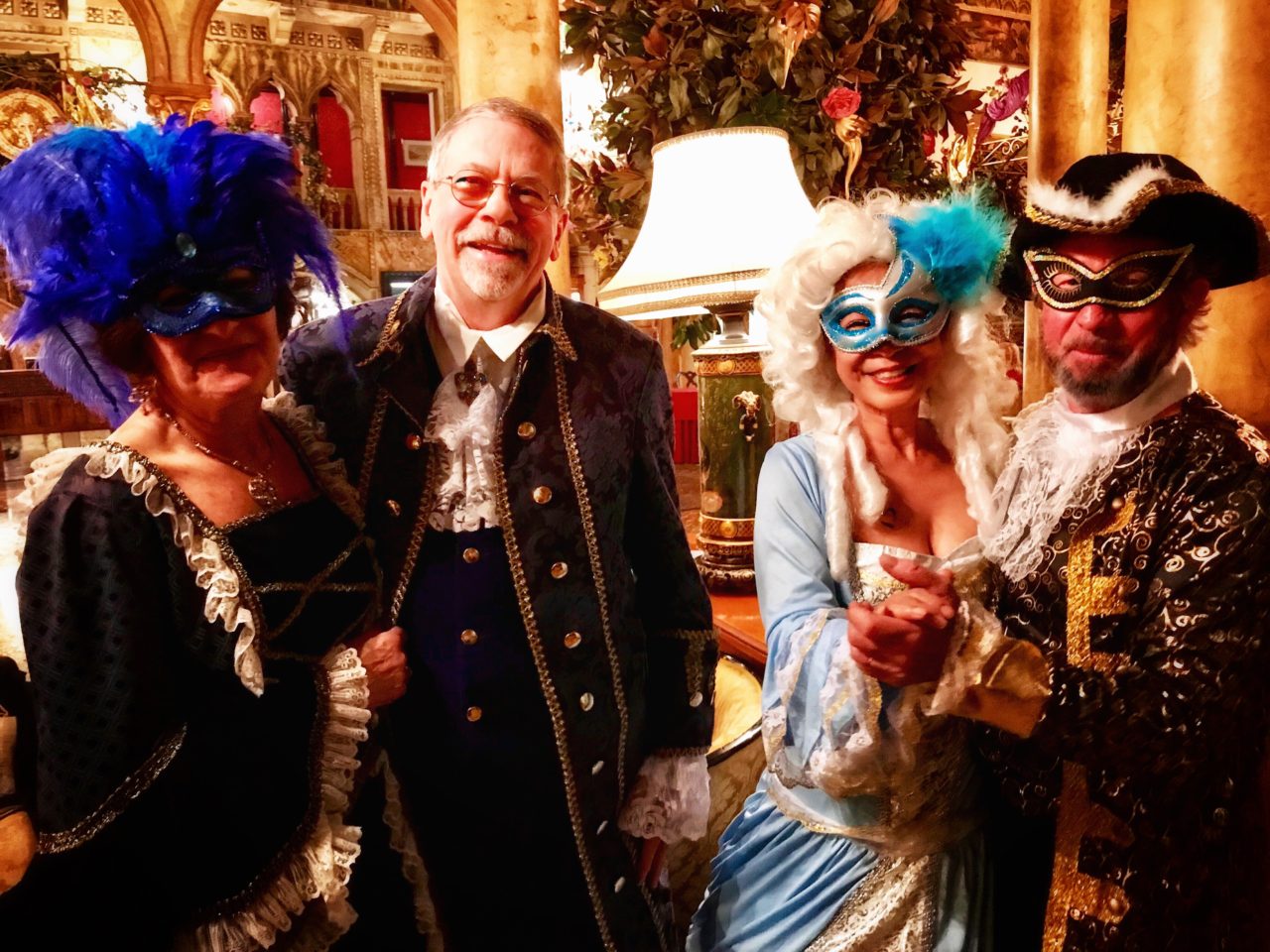 First and foremost, were the three Carnevale Costume Balls we attended, Il Minuetto at the most famous hotel in Venice, the Hotel Danieli (where we were staying),  the Grand Ball of Carnevale known as the “Ballo Tiepolo” at the Palazzo Pisani Moretta , and the Official Dinner Show and Ball at Palazzo Ca Vendramin Calergi.   This latter palazzo is well known for being the residence of  the famous composer, Richard Wagner, during his years in Venice, and also for serving during the rest of the year as the Casino of Venice, the oldest gaming establishment in the world.

Our favorite Carnevale Ballo experience was the elegant Il Minuetto at Hotel Danieli where the four-course dinner with wines was superb, the service was impeccable, and we delighted in the Minuet lesson we received from a Dance Master. 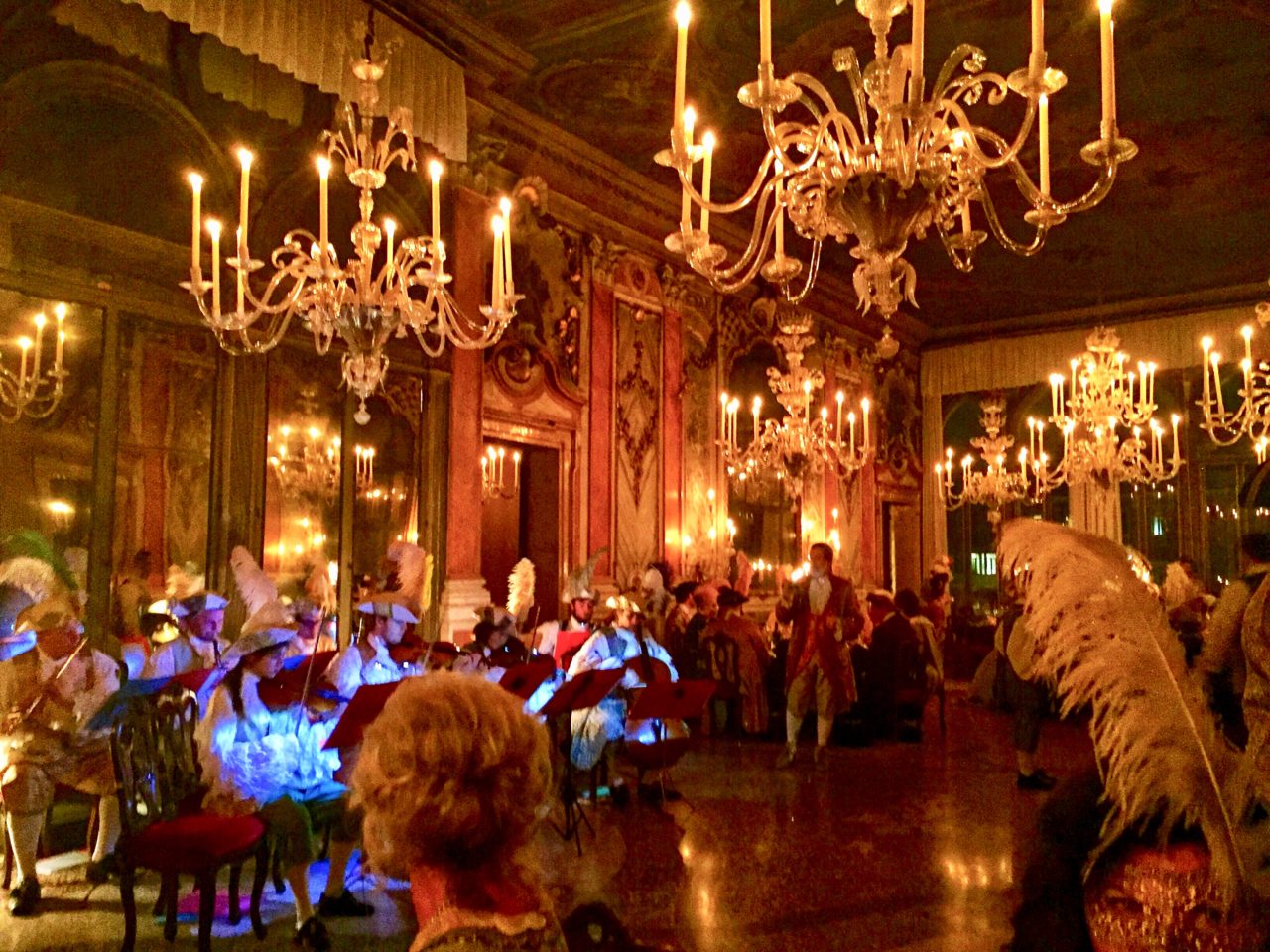 While we enjoyed both of the other two Costume Balls we attended as well as the water taxi ride over and back from the dock of our hotel to the dock of the palazzo where the Ball was taking place, there were a few hiccups.  The festivities at Ballo Tiepolo were abbreviated because the commencement was seriously delayed until 10:30pm, and the crowd at the Official Dinner Show and Ball was frankly a bit too wild for us, with guys dancing in nothing but bikini briefs, and dinner service was late and very slow. Perhaps our leaving shortly after midnight was too premature and we missed the more enticing experience later on?  Nevertheless, attending all three gave us much more insight into the Carnevale costume ball experience and we did have a very interesting time at each of them .  After all, people-watching is part of the Carnevale experience! 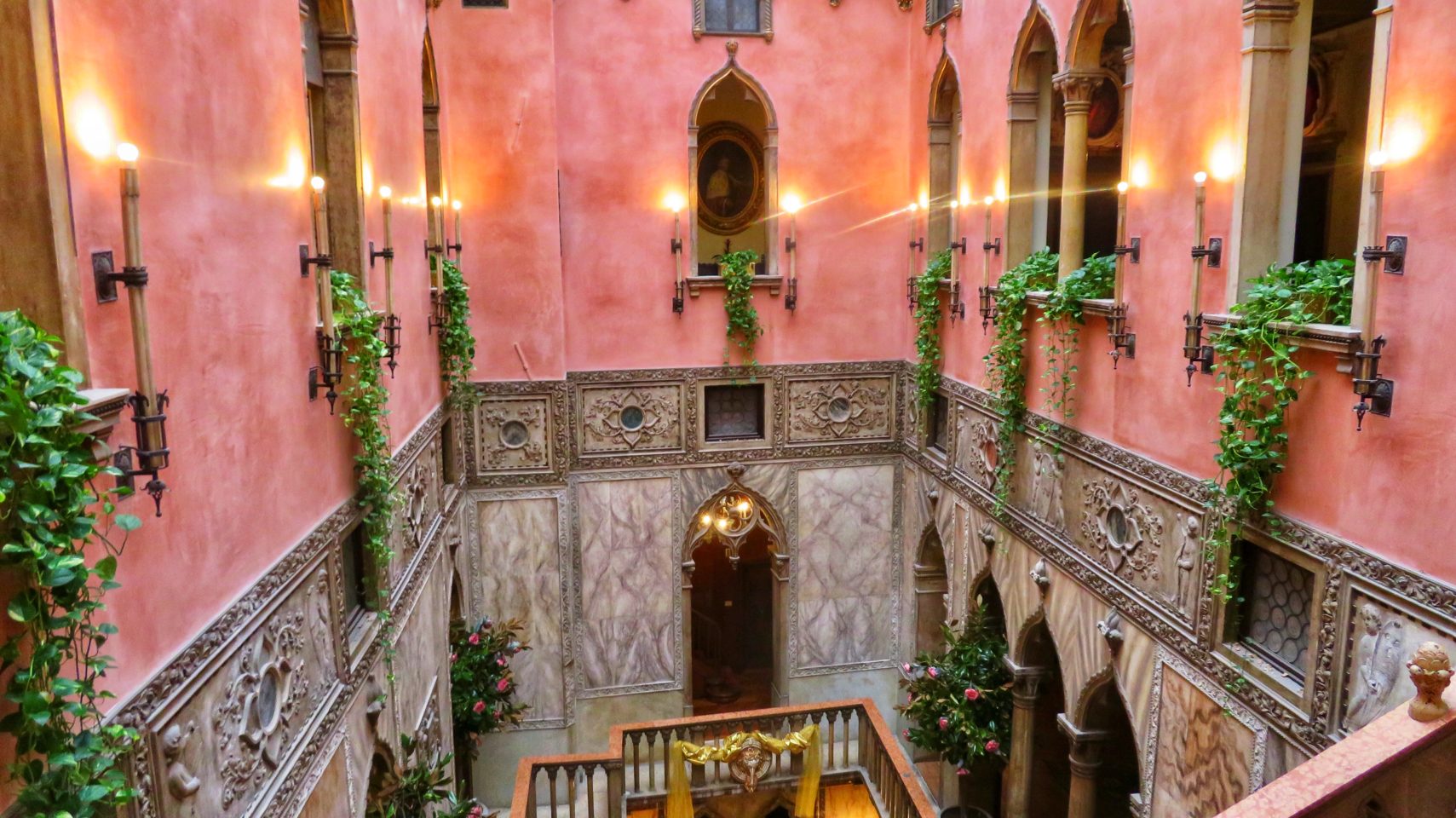 The Hotel Danieli was our exquisite home for our 15 glorious days in Venice.  This was our first time staying at the 5-star palatial Hotel Danieli, but I very much hope it will not be our last time.  The staff knew our names from day 1 and made us feel that our wish was their command.  Beauty is everywhere in Venice, but that’s an understatement at the Hotel Danieli, built as a palazzo during the Renaissance at the end of the 14th century by a noble Venetian family, expanded over the years, and still very much full of historic charm and allure in the 21st century. 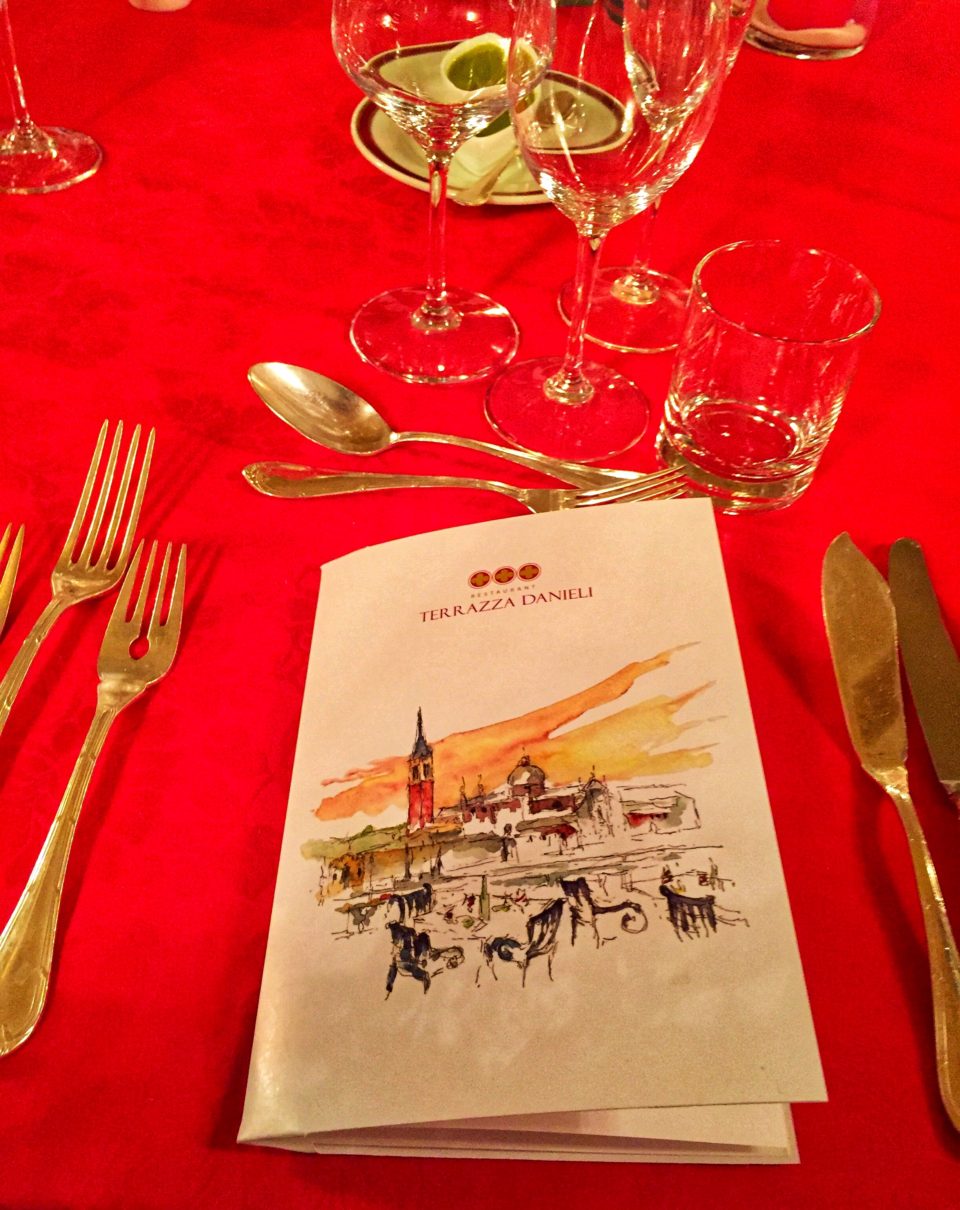 The hotel’s restaurants are superb – in fact, you’d be hard-pressed to find a better combination of Italian cuisine, service and view in Venice than at the Danieli’s main restaurant known as Ristorante Terrazza Danieli.  In the warmer weather, you can eat outside on the spacious outdoor terrace at Terrazza while enjoying a spectacular view of the Grand Canal and tutto Venezia!  But thanks to its many windows, fabulous views are also available year-round throughout the interior of the restaurant. 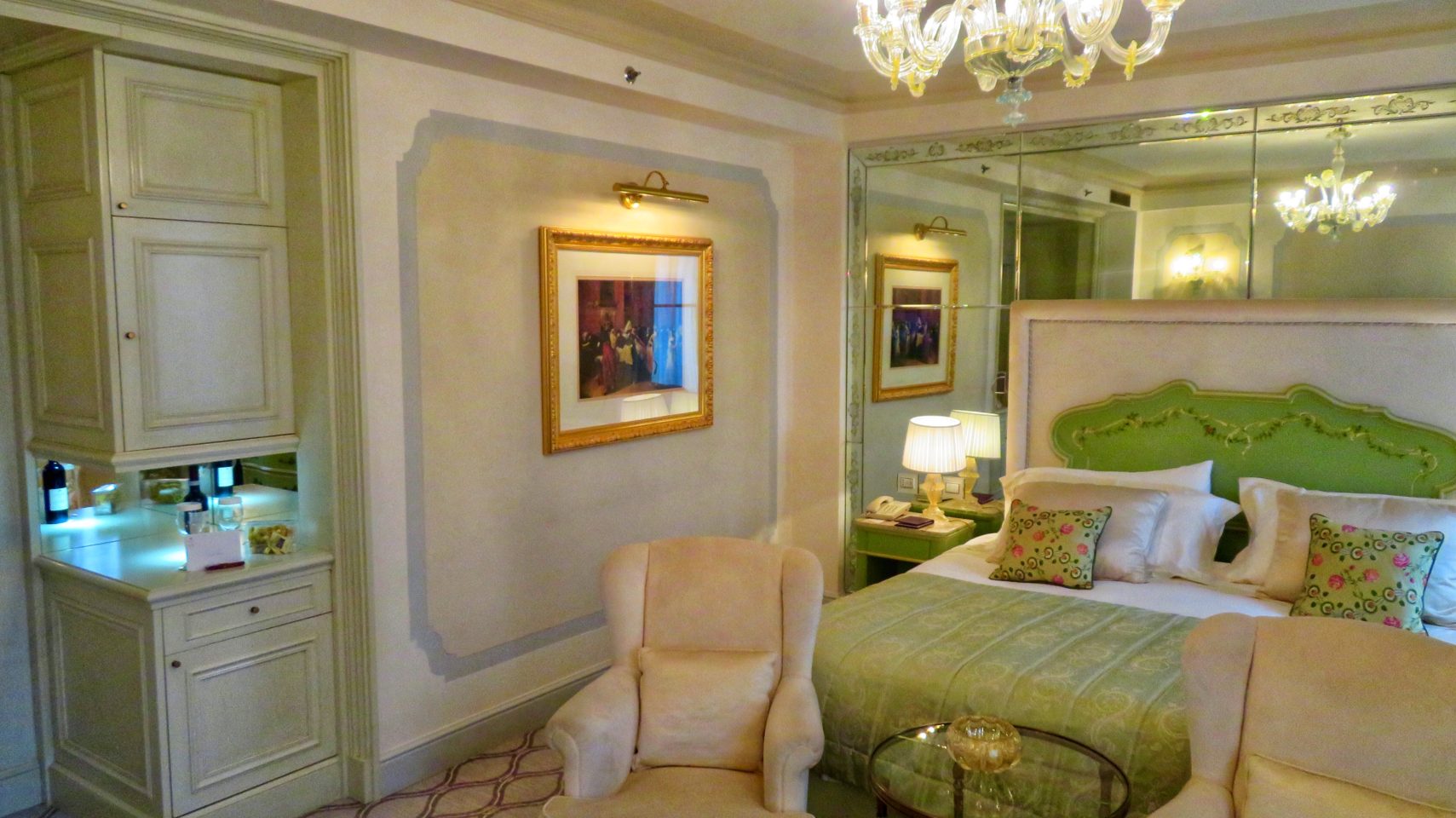 Our rooms located on the canal side of the Danieli were quiet, quite comfortable, and very well-appointed.  We had the pleasure of staying first in a “premium deluxe” room, and then in a top floor suite.  If you choose to sojourn at the Hotel Danieli, you will be in good company with the likes of many renowned artists, writers, musicians and other luminaries including Goethe, Dickens, Peggy Guggenheim, Leonard Bernstein, Steven Spielberg, and art critic John Ruskin. 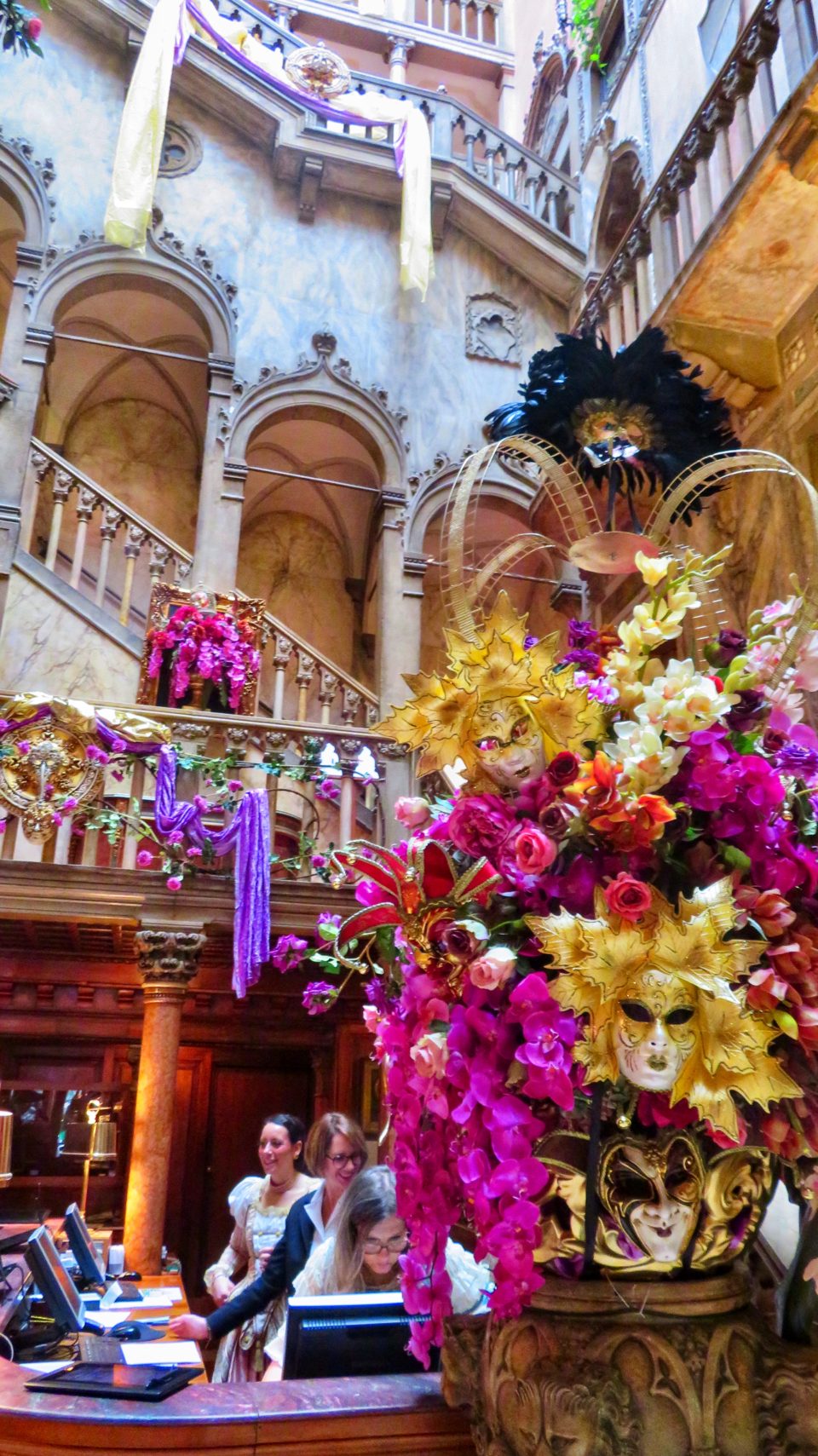 The cultural offerings are superb in Venice.  At the city’s renowned Opera House, La Fenice, we were totally entranced by the production of “The Barber of Seville”, and experienced sheer delight while enjoying our favorite Operetta, “The Merry Widow.”   From the casting and outstanding performances to the stage settings and scenery, our operatic experiences were extraordinarily satisfying, and we left La Fenice both times uplifted and humming some of the hauntingly beautiful music we had just enjoyed. 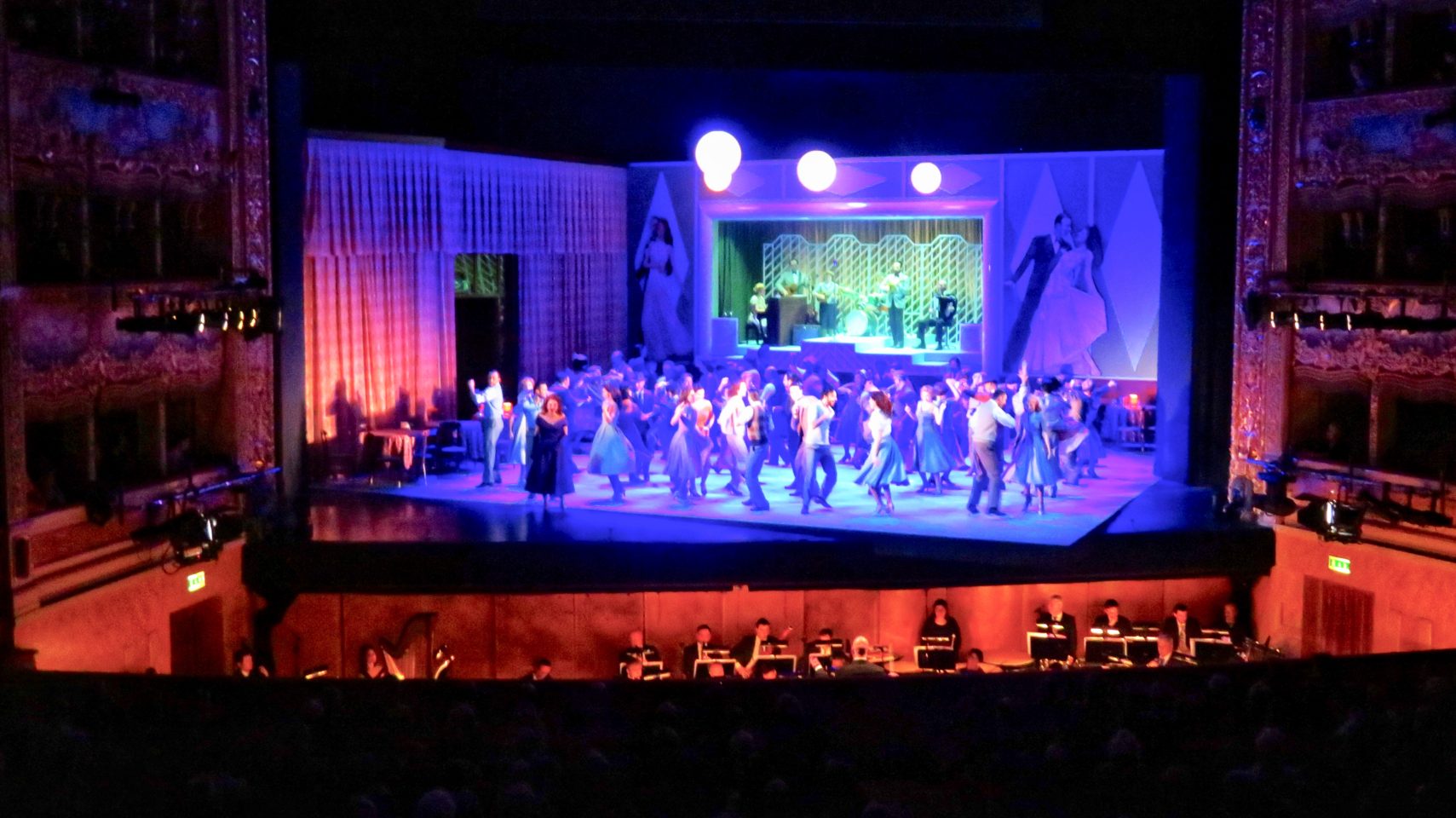 Similarly impressed,  we absolutely delighted in the outstanding Vivaldi Chamber Music Concerts at the Chiesa di Santa Maria della Pieta which was the Church where Vivaldi, regarded as one of the greatest Baroque composers, regularly worked and taught orphans for many years. 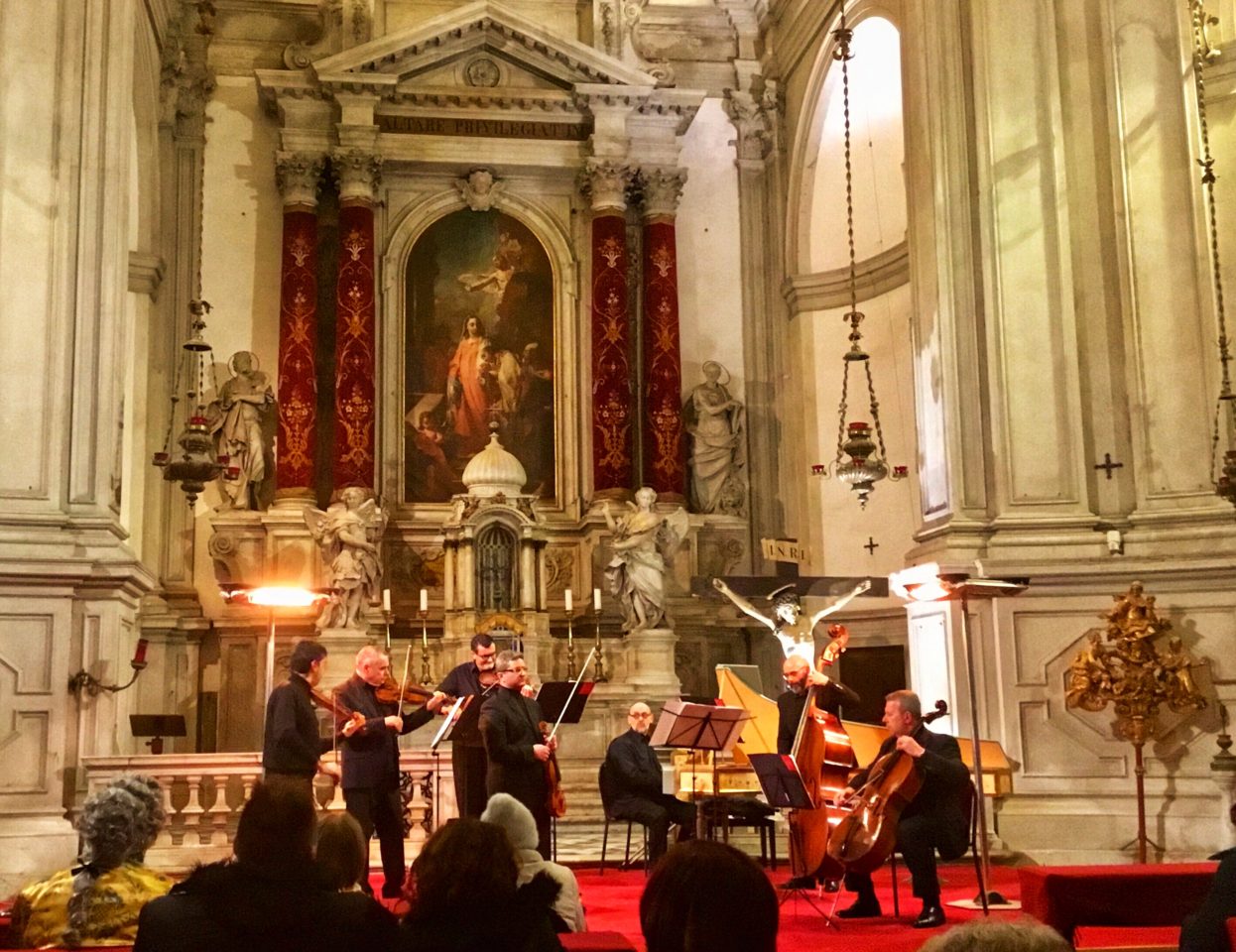 Venice has personality, charm and romance in spades.  Plus, for me, it has always been enchanting, yet never more so than at Carnevale time. 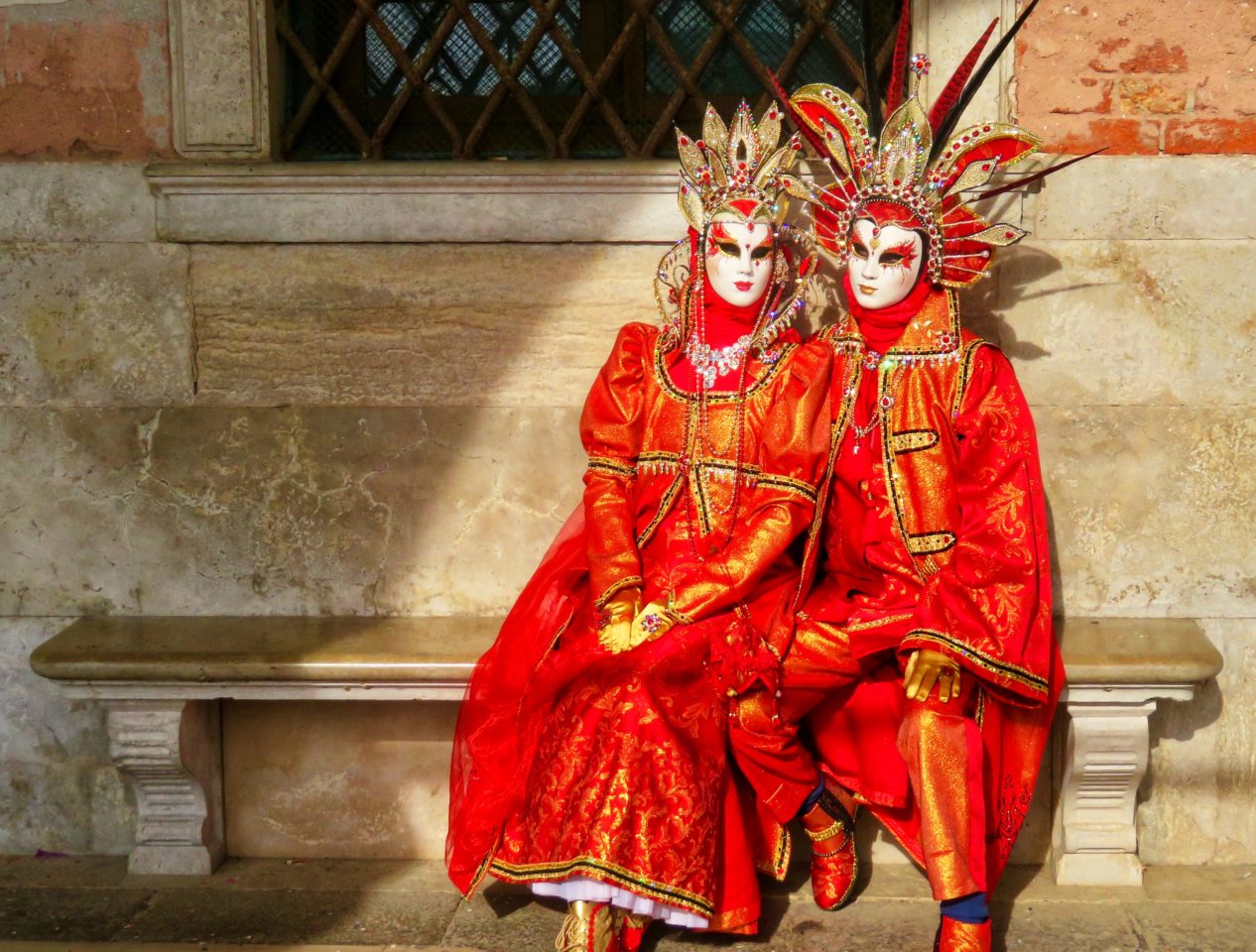 To be continued … please stay tuned for more “enchantment”!
As always, our focus at BonVoyageurs is on the joie de vivre we experience when we travel, and all opinions expressed in our articles are our own.
Stay tuned to BonVoyageurs.com for our writings about other Countries of the World as we share our joie de vivre from around the world. Luxury escapes, cruises and city breaks to Québec City, New York, Washington, Buenos Aires. In Europe and the Mediterranean, places like Paris and Nice in France, Florence, Rome, Napoli and the Amalfi Coast in Italy, Tel Aviv and Jerusalem in Israel. In Asia, countries like China, India, Nepal and so much more!
« Japan Favorite Experiences
Viking Ocean Cruises Room Service Menu »