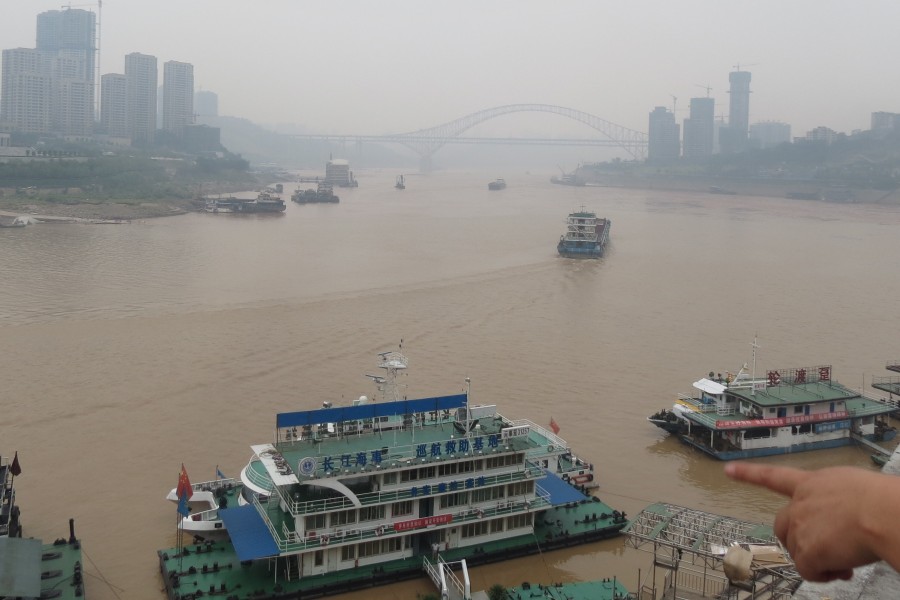 Chongqing China : Our day in Chongqing !

Read our previous posting at “National Rail travel from Chengdu to Chongqing !”

This is nothing short of fantastic. As I am sitting down to write this blog, in the observation lounge on deck 5 of our cruise ship down the Yangtze river, the speaker system is playing my favorite Chinese song, actually the only one I know and which I sang in many karaoke sessions during my travels to China many years ago. The title is something like Yuelandao Biaodeshing, which means The Moon represents My Heart. It is such a beautiful song, and I know the words! Ni wen wo ai ni … You ask if I love you…  The song was made famous by a stunningly beautiful young woman singer from Taiwan, Deng Lee Jun, who unfortunately died at too young an age. My Chinese interpreter, who traveled with me for years during all of my trips to China, used to sing that song at every karaoke session which seemed to follow each business meeting we had with a state enterprise in China.  I finally asked him to teach me the song so that I could sing it also! I later found out that this song was one of the first “foreign” songs allowed into China after it implemented its “Open Door” policy.

I have just left Lynn on deck 1 for a one hour foot massage; later today, both Lynn and I will get a 90-minute Chinese health massage while the rest of the ship goes out to visit Fengdu (Ghost City) in which we have no interest. Anyway, more about our Yangtze cruise later; let’s get back to where I was in my blog, the arrival in Chongqing.

In my earlier posting, I forgot to mention that my Scottevest travel vest also contains a small botlle of hand sanitizer, insect repellent, sunscreen, two pens and a notebook. The 3×5 notebook (and I have four spare notebooks in my suitcase) is my most used possession on the trip; that is where I jot down notes on anything and everything as we go about our day.

Let’s get back to Chongqing, the biggest city in the world, with a population of over 32 million. It is located at the junction of the JiaNin and Yangtze rivers. It is sometimes referred to as the Mountain City because it sits on the steep hilly edges of the rivers (which is also why you won’t see bicycles there), sometimes as the Foggy City, and there was plenty of it during our stay there, and sometimes as the Spicy City, since this is the true home of the hot pot as our guide was quick to remind us. Hot Pot came from the meals served to the porters working the docks of Chongqing. Sounds to me like a rivalry between Chengdu and Chongqing about hot pots!

Chongqing has a long history dating back thousands of years and I’ll let you do your own reading about that. Chongqing is a major industrial city; there are several motorcycles and car factories here as well as chemical, steel, coal, textile, …  Chongqing occupies a vast area (470km wide at its widest) and all you see are hundreds of skyscrapers on every hill you can see through the fog. But we are only here really because Chongqing is the main embarkation point for cruises down the Yangtze rivers; 40 different cruise ships do the cruise from Chongqing.

Charlie , our guide for the day in Chongqing, describes himself as a small Buddha and he certainly has the stomach to fit the name. We informed him right away that we did not wish to do the scheduled visit of the Three Gorges Dam museum, but would rather use the time in different ways.  That probably threw him off his stride, because I found spending the rest of the day with him very difficult and unsatisfying. I just could not get a straight answer out of him, whether it be the translation of a Chinese word, or even a simple question such as whether the teahouse has ice cubes. Which is why we later declined to have dinner with him and we boarded our ship as soon as we could. First, we head to Ciqiku, an area going back 1,800 years which used to be the old port of Chongqing and has now become a series of streets similar to Jinli street in Chengdu or the Muslim street in Xi’An. Small streets with old wooden Chinese buildings full of shops and stalls offering everything from food, snacks, souvenirs, etc…  The street is very crowded and it is hard to make our way forward to the shores of the JiaNin river. One stall in particular has the biggest following; there is a long line of people waiting to buy some type of food there, which is freshly bagged for them and which they carry away in large bags. It is Mahua, a favorite local fried snack made of sticky rice and sesame.

Further down the street, I think I have reached an open sewer area, but I am told it is the smell of doufu (tofu). Well, now you know what I think of tofu.

We then left Ciqiku to have lunch in the downtown area. My negotiations with the guide relative to where we should have lunch were very long and very frustrating, but he eventually brought us to a very fine Chongqing restaurant, Yi Pin Xiang Jiu Lou restaurant, where we had a feast. Kung Pao Jiding (Kung Pao chicken), Piao Xiang Lou Rou (beef with green peppers), Jidan Mian (noodles with fried eggs), Ye San Tun (mushroom dish). Always with a platter of fresh fruit at the end.

We then took a five minute walk to what our guide called city hall, otherwise referred to as Congress Hall, a majestic Chinese structure with a pagoda-style roof sitting atop a hill and containing a large concert hall as well as a tourist office and two floors used by the Arts Institute of Chongqing to display the art of its students.

We then asked our guide to bring us to the Carrefour (part of the French chain of hypermarkets Lynn and I are very familiar with) store we knew existed in Chongqing . For two days now, Lynn and I had been unsuccessfully trying to buy her some hair spray. The hotel staff brought her some gel spray, the beauty salon tried to sell her some other type of spray, wherever we turned we just could not get the right product. So we had had Ben, our Chengdu guide, write the proper Chinese characters for the “hair spray which helps hold the hair in place” on a page of my notebook and we were now going to execute our plan to locate hair spray at Carrefour in Chongqing.

As luck would have it, the first thing we saw as we stepped into the Carrefour entrance, was a beauty products shop carrying both Chinese and imported products; Lynn had her hair spray a minute later. So we used a few more minutes to walk down the aisles of this Chinese Carrefour, stocked with mostly Chinese products, and used the opportunity to buy some chocolate for our time on the ship.

We then walked over to an area in the center of Chongqing called Hongya Cave, which housed a huge multi-story building full of souvenir shops, international restaurants, etc…. We pretty much exhausted ourselves walking through several floors of this structure before we collapsed at one of its teahouses. I kept looking at my watch, hoping that five o’oclock would come soon, the earliest time at which we could board the ship.

But since there was time left, we asked our guide to drive us to the edges of the Yangtze river, which we had yet to see. He somehow tried to dissuade us from that, offering to bring us to a temple of some sort. Thankfully, we resisted, because we then drove to perhaps what in my view should have been and should be the first stop for any tourist on a visit to Chongqing, the grand square overlooking the Yangtze river. I think the name of the square is Peoples’ Square, something like Tainiamen square (as I said, I could not get a straight answer from our guide) and it is a huge plaza full of people, including some flying kites going several hundred meters into the air. From there you get a phenomenal view of Chongqing, of the junction of the JiaNin and Yangtze rivers, of some of the cruise docks below. In addition, you can walk from that plaza along the Yangtze river on a broad sidewalk for quite a distance. In fact, we ended up virtually walking to our ship, which we reached shortly after 4:30pm.

Even though we were early, I took the chance and stepped aboard our ship, the Yangtze Gold One.

Read what happens next at “Cruise Ships : The Yangtze Gold One !”

« National Rail Travel from Chengdu to Chongqing !
Cruise Ships : the Yangtze Gold One ! »