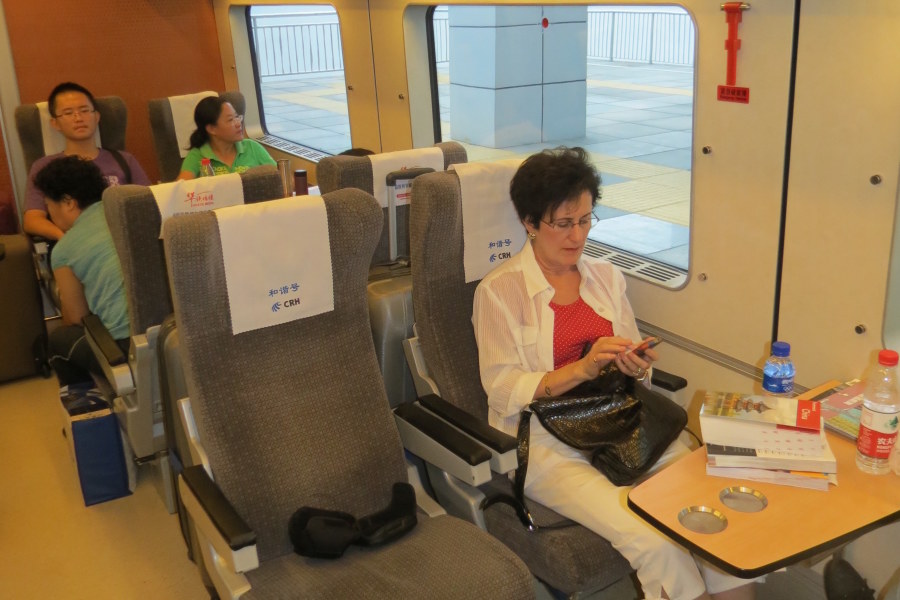 Read our previous posting “Panda Bear keeper for a day!”

I was somewhat anxious about our scheduled train ride from Chengdu to Chongqing aboard a China National Rail high speed train. Our guide had warned us that there would be a lot of stairs and there was no way I could carry both our suitcases, my backpack and Lynn’s carryon up and down a lot of stairs. But I had wanted to take at least one train ride during our trip to experience this aspect of China; after all, China in the past ten years has managed to build the biggest high speed train network in the world.

A number of streets converge onto the large square in front of the Chengdu train station and traffic grinds to a halt there. Traffic lights are useless as cars and buses clog the large intersection; it’s every man for himself and our driver has to inch his way through this maze of traffic in order to drop us off at the giant plaza in front of the station. It is seven fifteen in the morning but there are already thousands of people jamming this large plaza, many moving but many simply sitting on top of their belongings. We have to work our way through that maze of people in order to reach the station.

Airport-style security greets all entrants to the train station. I am not sure about the effectiveness of those measures, however, as I decide to keep my Scottevest travel vest on and yet breeze through without anyone stopping me. I always wear my Scottevest travel vest on trips; it has something like 22 pockets, most of them hidden and the rest securely zippered. That vest contains my ipad, my cell phone, my wifi hotspot, my chinese cell phone, my 50-hour spare battery, my usb car charger, my replacement cell phone and camera batteries, two sets of earphones, a packet of kleenex, a packet of wipes, a roll of toilet paper, a roll of litter bags, in brief the basic essentials. I keep the rest inside my Scottevest hidden cargo pants, where secret pockets contain my credit cards, my chinese as well as american cash, passports, tickets, etc… In other words, I always travel with my valuables on me, not packed or stored elsewhere. In spite of it all, I walked through that xray machine as if I had been naked.

We then inch our way through the crowd waiting for trains and head straight for the starting gates. I call them starting gates because it reminded me of the starting gate at a horse race. Several locked tall metal gates behind which an unruly crowd gathers waiting for the signal to head for the platform. There are about four gates for our train, long lines of people behind each gate. Where are the handicappers? I place my bet on gate no 3 and we patiently wait; the gates will open twenty minutes before departure time. I can see that, despite the heavy bags and other belongings which the chinese are carrying, many of them are good sprinters and may beat me around the bend. They have an edge on me as they probably know the racetrack well.

Thankfully, security has let Ben, our guide, come in to help us, so he is handling Lynn’s suitcase. When the gates finally open, we head towards platform 10 by taking an escalator up to a walkway running above the tracks and then down stairs to our assigned platform. Except that there is a suitcase ramp on the side of the stairs making it relatively easy to roll the suitcases down as you walk down the stairs. We then walk to our assigned car, which happens to be the last car of the train. We can just roll our suitcases aboard, no steps and straight on to a storage area located right behind each seat; I did not have to lift a finger!

This China National Rail high speed train is as comfortable as any in Europe, and the two hour ride to cover the 300km between Chengdu and Chongqing is extremely smooth. An attendant offers coffee and tea a couple of times during the ride, and a food cart also showed up. An electronic board tells us our location, speed, and the outside and inside temperature as well as a bunch of other information written in chinese characters. The highest speed I saw was 195km/hr. My wireless hotspot worked flawlessly throughout the trip. Bravo, China National Rail !

When we finally pulled into Chongqing Bei (north) station  and slowly ground to a halt, I saw that a ban ban porter (so named because of the old chinese manner of transporting things with a stick across their shoulders, and ban is the word for stick) was waiting right outside the door of our car; our Chongqing guide had sent him to transport our luggage, which he did right onto the car waiting for us outside this gigantic train station, the biggest one I have ever seen. Yes, national rail travel in China is quite manageable for tourists; in fact, we would recommend visitors include at least one national rail trip as part of their itinerary!

Read what happens next at “Chongqing : Mountain city, foggy city”