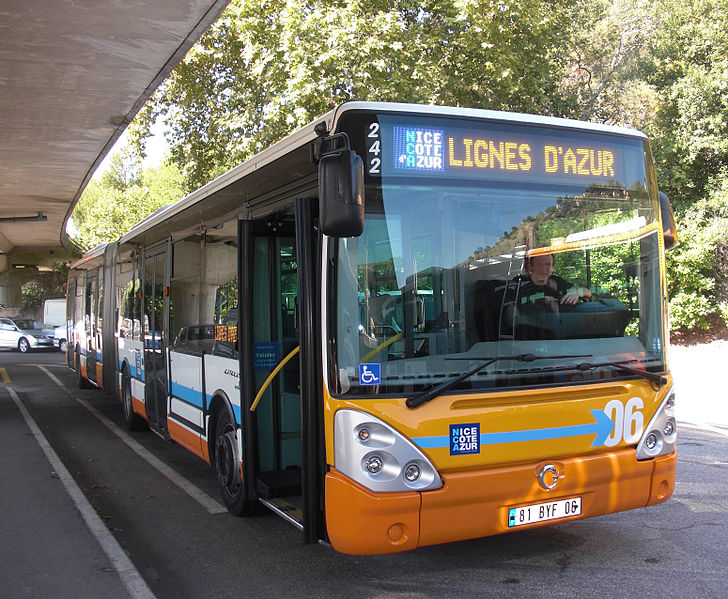 As I am planning our movements around the French Riviera, I keep being impressed by French public transport, whether bus or train. We have come to know and like the high speed TGV train service between Paris and the rest of France and Europe offered by the SNCF, but I am now discovering how fantastic the public transport service is along the French Riviera. Not only does it turn out to be the most convenient way to get from one place to another, it is also by far the cheapest, and quite often the fastest as well. The Nice Train station will be about a ten minute walk from our apartment, and several bus stops will be a couple of blocks from our digs on rue Marechal Joffre. Buses run frequently to all destinations on our target list. The Lignes d’Azur bus line website has downloadable schedules for all of their lines and routes, and I have put all of the relevant ones on my iphone, ipad and laptop. Both the train and bus companies also have several mobile apps, providing real time GPS-based info on itineraries and the next available departures, etc… That should come in handy during our trip.

For our visits to towns along the coast, the regional train TER (part of the SNCF)is usually the best way to go. We have Cannes at the western end of our area, and Menton at the eastern end, next to the Italian border. So traveling to Cannes, Cagnes, Antibes, Juan Les Pins, Beaulieu sur Mer, Monaco, Menton, etc… should probably be done by train. For example, relative to our home base in Nice, there are several trains going to and from Cannes every hour, taking about 30 minutes to get to the Cannes train station, and that will cost us the sum of about US$5 per person! If that sounds like too much, one can always take the Lignes D’Azur bus, which costs about $2 to go anywhere on its network on the Riviera; the bus from Nice to Cannes takes about one and a half hours. To get to and from Menton on the eastern side, there is a train every half hour which also takes about half an hour to get there; because it is a less frequented destination, the cost is higher, a mind boggling US$7.

Generally, from what I am reading, the sightseeing rule seems to be to take the train to go west of Nice, and to take the bus to go east of Nice. The reason is that the bus going east of Nice follows a gorgeous road along the Mediterranean coast and thus provides some great sightseeing. The Nice-Monaco-Menton 100 bus line is a great tour in itself if one can afford the time; it runs just about every ten minutes, and takes 45 minutes to get to Monaco, one and a half hour to get to Menton. Unless reduced by a multiple ticket card of some sort, the individual ticket is always 1.50 euros (about US$2). By comparison, the train to Monaco, one every half hour or so, takes only 22 minutes and costs about US$4. One difference between the train and the bus is that you can reserve and buy your ticket in advance (and usually even your seat assignment) for the train, but not for the bus.

To reach the destinations which are not directly along the coast, but in the countryside or up the hills, the bus will be the only way to go. That will be the case for our trip to La Colombe d’Or in Saint-Paul-de-Vence, or to Chateau Eza in the famous perched village of Eze, east of Nice. We may also choose the bus for our visits to the Musee Renoir in Cagnes and the Musee Escoffier in Villeneuve Loubet, simply because the bus stops are closer to those destinations than the train station. In most cases, the train station is extremely convenient for walking tours since it is located right in the center of town, near the old parts of the town and the port; consequently, one just walks out from the station into the main pedestrian center of town.

We always have the option to rent a car for a day (with door to door delivery and pick up service), but it just seems right now to be totally unnecessary, and actually less practical than public transport. We will soon find out, and my travel blog, BonVoyageurs.com, will broadcast our findings.

Read our next posting “Nizza or Nice France? Cote d’Azur or French Riviera?”