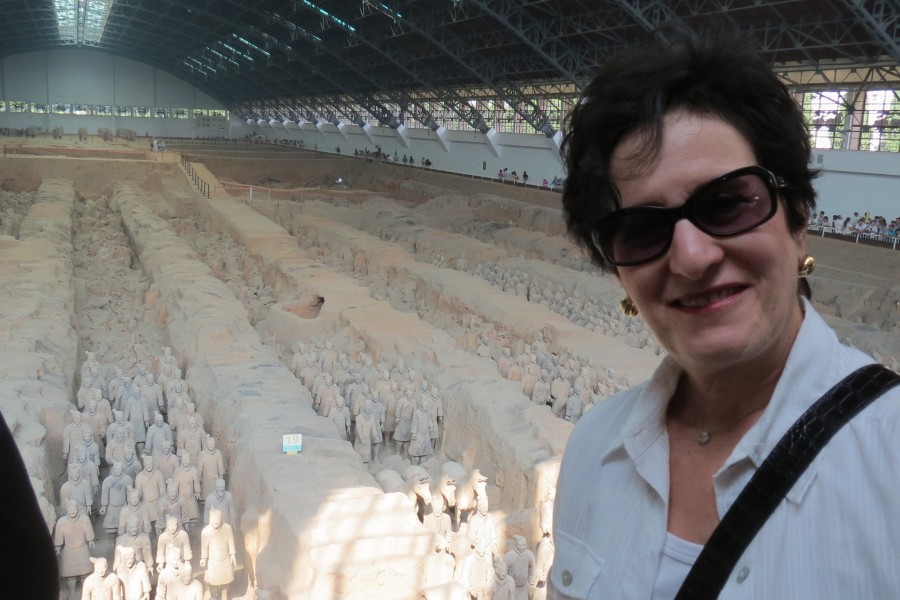 Dominique was wondering whether we were still on a diet! Yes, there is a scale in our bathroom at the Shangri-La Hotel Xi’An, but I tell Lynn that it is not calibrated properly. I am becoming addicted to the pain au chocolat which is on offer every morning for breakfast, together with a wide selection of other pastries and cheeses. There is nothing like a good hot cup of coffee and a pain au chocolat to make you feel good about the day ahead. Lynn and I have so far stayed away from the selection of Chinese breakfast dishes on the buffet in the Horizon Club lounge, but I may not be able to resist temptation much longer. David, our guide, told us that his breakfast consists of rice congee porridge, steamed buns, a boiled or fried egg and a glass of milk.

The Terracotta Warriors museum is located about an hour and fifteen minutes east of Xi’An, near the resort village of LinTong, where what I estimate to be about five hundred thousand people live and enjoy the hot springs from the neighboring LiShan mountains.  We took a very modern six-lane highway to get there from Xi’An and passed a number of fields of pomegranate trees, interesting because each fruit has been covered by a clear plastic bag to protect it from I don’t know what.

The Terracotta Warriors museum itself is a very large and modern complex of several large buildings; be prepared for a lot of walking around. Three pits have been excavated so far, each one having its own building. Then there is another building to house the chariots. And finally a fifth building for the Imax theatre and the museum shop. While we were driven from the gate area to the first building in a race car (a twelve passenger cart driven by a grinning young woman with a very, very heavy foot and no concept of the dynamic forces at play in a ninety degree turn taken at sixty miles an hour), you have to walk your way back to the gate at the end of the visit in order to force you to go by the hundreds of shops, stalls and restaurants and bear the inevitable harassment of the shop owners.

I have been encouraging Lynn to do a posting about Chinese toilets, as she has plenty of experience on the subject so far on our trip and she always seems to come out of one with something interesting to say about it.

We drove back to the center of Xi’An, near the Bell Tower,  in order to have lunch at Tong Sheng Xiang, the best place in town for yangrou paomo (mutton meat with shredded pancake), the most famous dish of Xi’An. We were not disappointed with the experience; I think this is Lynn’s favorite dish so far on our trip, with the Zhajiang Mian noodles of Beijing a close second. Naturally, she takes it with a lot of the xian cai (coriander), la jiao (chile peppers) and tang suan (picked garlic) condiments on offer, while I stay away. I have learnt to say “Wo pu she la jiao” (I don’t eat chile peppers), as I am anxiously preparing for our visit to Sichuan province and the very hot and spicy capital of the hot pot, Chongqing. On the other hand, Lynn is looking forward to it. My Chinese is starting to come back a little; I was the one who asked for the check and paid for the meal, all 144 yuan ($20 or so).

By the way, I forgot to mention that there is no tipping in Chinese restaurants. You don’t go there for the service, something you will agree with quickly after you experience it a few times. The Chinese mentality is that you are going there for the food and that is what you are paying for. Fine with me.

We then drove to the Shaanxi Museum of History, a very well designed and fascinating museum covering mostly the history of China up to the Middle Ages, when actually China was at its peak. I still get lost with all these dynasties, Qin, Tang, Ming, Song, etc… and have made a note to myself to study harder at school next time the subject is covered.

Our guide commented on the cultural difference between China and the United States by stating that the Chinese give more importance to the larger picture. When you give someone’s address in China, you start with the country, then the province, then the municipality, then the district, then the street, and finally the street number. The exact opposite of what we do, and apparently, that shows that we are totally focused on the specific and on the individual while Chinese people put themselves within the context of the group and the country.

After the museum, Lynn and I told our driver that we would skip a visit to the Big Wild Goose Pagoda, our next scheduled stop. After all, I had already seen it from the road. More to the point, Lynn and I were totally exhausted and we wanted to take a break and rest before the big evening ahead, the dumpling banquet and the Tang Dynasty Imperial Show.

I am usually very wary of doing these touristic things, but the show is so popular that I made an exception. True to expectations, the place was packed with busloads of tourists. The food of the dumplings banquet was nothing to write home about and cannot be recommended, but we certainly were served a very wide selection of dumplings and more than I could eat. As to the show, it was actually quite impressive. Dozens of performers in very elaborate costumes performing music and dance from the Tang Dynasty period. The music is piercing, so you are glad to leave after the one hour and ten minute show, but overall I would say I am glad we went.

Read what happens next at “Chengdu China:  capital of Sichuan!’”