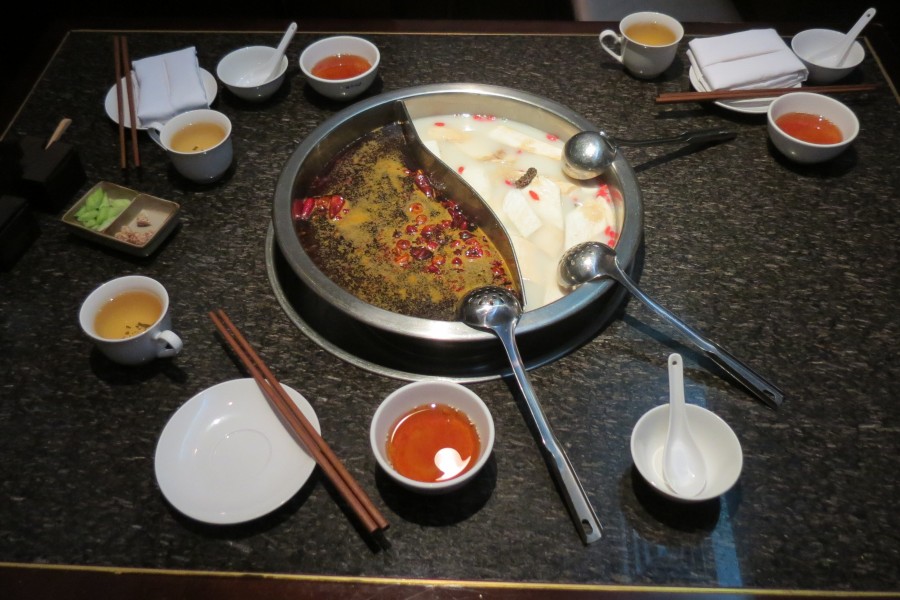 The Xi’An airport we used, which is actually located in the neighboring town of Xianyang ( another previous capital of China), only just opened two months ago, or so the staff at the first class lounge informed us. And when we later landed in Chengdu, we were told by Ben, our new guide, that the Chengdu Airport  terminal there was also brand new and had just opened. I only wish that all those Texans who like to brag about how big things are in Texas came here to visit; as soon as they would have seen what I am seeing, they would be in awe. By the way, China Southern is not as good an airline as China Eastern Airlines, and our lunch in the first class cabin was mediocre.

As we were walking through this immense terminal, I noticed that the highly polished floor, great for rolling suitcases, was interrupted by what seemed to be a line of raised grill markings. I was wondering why someone would design what would surely be an irritant to the good flow of suitcases across the terminal, and I asked Ben about it later. Those are lanes for the blind, he responded, to my great astonishment and admiration. Blind people can find their way through the terminal simply by walking along those raised marks on the floor; so ingenious.

In any case, here we are in Chengdu, capital of the Sichuan (which means four rivers) province and gateway to neighboring Tibet; a city of more than fourteen million people viewed as one of the most livable in China. Lying in a basin close to mountains means a very humid climate, great for bamboos and pandas. A prosperous city, it seems, thanks to a lot of high technology assembly plants; most of the ipads in the world are made here, I am told. I noticed a large number of electric bicycles and electric scooters (2,000 rmb or about $300 will buy you one), more than what I had seen in Xi’An or in Beijing.

There was no cake in our hotel room when we checked in at the Shangri-La Hotel Chengdu, only a vase of flowers, a bottle of wine, a box of chocolates and a bowl of fruit. The teapot was there but empty.  A disappointment, given our experience to date. Nevertheless, we headed out to see Chengdu, starting with Wuhou temple and JinLi street. What a fascinating and interesting walk this turned out to be. The architecture of the buildings, the food offerings of “snack alley”, the large crowd strolling through, the teahouses and bars, the unusual shops, the mere fact that this street seems to have remained unchanged for one thousand years, all contributed to a most enjoyable experience.

It only got better, as we then proceeded to Bai Wa Teng park to participate in the most quintessential experience of Chengdu, the teahouse. I tried both the Bamboo leaves tea and the local jasmine tea and selected jasmine. Both Lynn and I ended up getting a 20 minute neck and shoulder massage while we were enjoying our tea.

We then walked over to the Huang Cheng Lao Ma restaurant for a huoguo (hot pot), or more precisely a yuanyang huoguo, a hotpot with a spciy and a non-spicy side. One side contained oil full of chile peppers, the other a mushroom soup.  To cook into the hot pot, we selected beef, mutton, pork, chinese lettuce, lotus roots, bamboo shoots and mushrooms. It turned out to be a most enjoyable meal; Lynn ate from the spicy side, and I from the other one.

I had thought long and hard before electing to go for a hot pot. But how could I visit Chengdu, the capital of Sichuan, and not have the most famous dish of the province? I am very glad we did; we both enjoyed it.

Lynn and I have both fallen in love with Chengdu, a city which is so far so much more appealing than either Beijing or Xi’An. I’ll write more about Chengdu when I feel less exhausted. But for now, I’ve got to get ready for an early rise for the car ride over to the Giant Panda center tomorrow.

Read what happens next at “Shangri-La Hotel Chengdu”