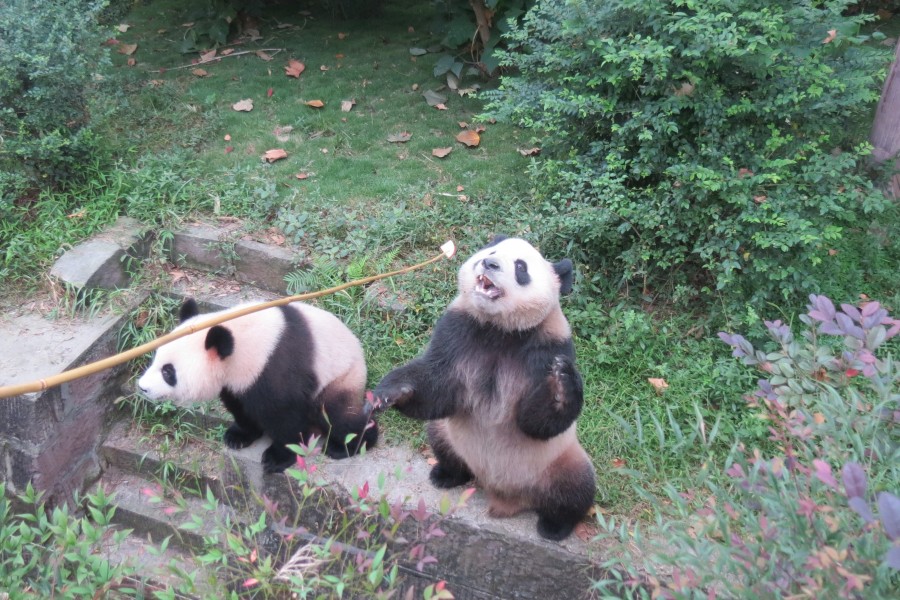 Panda Bear keeper for a day in Chengdu China.

As we were driving to the Chengdu Research Base for Giant Panda Breeding (sic) north of the city of Chengdu, I noticed that the traffic lights had four lights rather than the usual three red, yellow and green ones. The fourth light was a bicycle light. Not that we saw many bicycles; in Chengdu, they clearly have been replaced by electric mopeds and scooters.

I asked Ben, our guide, what he had for breakfast: baozi (large dumplings) and soybean milk, he replied. Whenever he speaks, he reminds me of Dustin Hoffman in the movie Rain Man. The movement of the head and the repetitive “yaah”.

When we arrived at the Giant Panda center, we were met by our coach for the day, Miss Lu. That is because we had paid for the honor of being panda bear keepers for the day. While there were large crowds of tourists invading the hilly and wooded complex, we were escorted separately to the topmost panda bear  “enclosure”, which means a twenty minute walk up the hill (carts were also available if we had so wished). I had had a lot of questions about our day here. How much mud would there be if it rained? Answer: all the paths are very well paved so there is no need to be concerned. What about the toilet facilities? Answer: would you believe luxurious toilet facilities with fish aquariums in the entrance area, and electronic toilet seats?

There are eight panda bear “enclosures” in the complex, in addition to all the other buildings spread throughout the hill and housing administrative, research, kitchen, restaurant and other facilities. The giant pandas are a species which is more than 8 million years old, and there are something like 1,600 giant pandas left in the world today, of which 80% live in Sichuan province, with the remainder being mostly giant pandas on loan to zoos around the world. The Panda Bear center here houses about 50 giant pandas and the main function of this center is artificial reproduction.

Apparently, it is very hard for a male panda bear to find the right female panda, which has contributed to concern about survival of the species. That is why the Chinese now resort to artificial insemination to get the female pandas pregnant, and that is the main purpose of this panda bear center. One big issue was sperm collection, but, after years of research, various experiments and countless hours of trial and error, they have finally found the answer: a hand job.  At least, that is what I understood when they described it as “massage and stimulation”.

Thankfully, sperm collection is not the job of the panda bear keeper, which is our task today. There are eight panda bear enclosures in the center, of which two are nurseries for newly-born pandas and one is an enclosure for the red panda bear, a smaller version of the better known black and white panda bear. Our assigned enclosure houses five pandas at the moment, five pandas which we came to know well over the course of the day. First, there was Da Da (big big) and Shao Shao (small small), two three-year old females; then there was Wu Yi (five one), a male so named because he weighed only 51 grams at birth, significantly below the average 120 grams, six year old; Fu Fu (lucky lucky), a male 11 year old; and finally Bing Dian (ice point), a 12-year old male panda bear we never actually met because he slept through the whole day. A panda bear normally lives 15 to 20 years in the wild, 20 to 30 years in captivity.

Two Japanese tourists join us for our day as panda bear keepers for enclosure no. 1.  They are apparently Panda Bear fanatics and come here several times a year. The first job we are given is to feed dessert to the pandas, starting with the playful Da Da and Shao Shao. The main diet of a panda bear is bamboo shoots, of which they eat 15 to 18 kilos a day. They are also fed apples and panda bear cake for dessert, with Centrum multi-vitamins hidden into the food. Did you know pandas have six fingers?

Anyway, our first task is to feed apples to the pandas. Guided by Miss Lu, we put apple pieces at the end of a long stick and feed them to the pandas in turn. Because the females need to exercise more, Miss Lu asks us to keep the end of the stick above the panda bear’s head so that she is forced to stand up to get the apple (pinguao). When they speak, pandas make a noise similar to the neigh of a horse.

Pandas eat for 16 hours a day, so we have our work cut out for us. After the apples come the panda bear cake, made of rice, soybean and corn. Lynn and I get the “chance” to taste it and frankly, it reminded me of the Scandinavian bread that Lynn eats every morning. Some of the pandas have come back inside so that we get very close to them, feeding the cake with a very short stick. Fu Fu had to be cajoled as he seemed to prefer the bamboo shoots to the cake.

Then came the task of cleaning the panda’s enclosure. As part of watching over the health of each panda bear, the keepers weigh separately all the left-over bamboo pieces and all the Fanbian (poop) generated by the panda bear. And there is a lot of it all over the floor; the only clean part of the enclosure is the elevated platform on which the panda bear sleeps. This part of the job is optional, as Miss Lu points out, and Lynn quickly opts out, but I tackle the job of scooping up the poop in one enclosure and then placing it into a trash bag for later weighing. The real panda bear keeper is watching me with a disdainful look, and quickly decides to have me fired, to my relief.

I should say that we had been provided with shoe covers and plastic throw-away aprons so that our whole job could be done without worrying about our clothing; our personal effects were stored quite securely at Miss Lu’s desk.

Throughout our morning with Miss Lu, she talked to us about the life of a panda bear, and I will spare you from all that information. Suffice it to say that each panda bear has his or her own personality and the panda bear keepers have to adjust to that. I became particularly fond of Wu Yi, who had had a bad experience with a female when he was five years old; the female would not let him come back inside and he had to spend all of his time outside, poor boy.

After our work shift was over, we bid goodbye to Miss Lu and visited the rest of the panda bear complex with our guide. This included visiting one of the nurseries, where we saw newborns and young pandas not much more than one hand long. We also visited the red panda bear enclosure as well as several of the other panda bear areas. As we were walking down an elevated and fenced in walkway, a red panda bear slowly slid under the fence on one side, walked across the pathway a mere fifteen feet away from me, and down under the fence on the other side; clearly the fence is not intended to keep the animals in, it’s to keep the humans out!  We then sat down for an eighteen minute movie about the pandas before sitting down with our Shangri-La Hotel lunch box for our midday meal.

We then returned to Chengdu to visit the brocade museum and shop, since Brocade has a history of more than two thousand years in Chengdu. The main river running through the city is called Jin Jiang (brocade river). This is particularly interesting since the main Chinese restaurant we go to in Rockville is called Sichuan Jin River restaurant. I never knew what the significance of that name was until now. On the way over, we crossed an area full of electronics stores which reminded me a bit of the Akihabara district in Tokyo. I counted no less than four Apple stores within one and a half block.

Although we could not find anything in the brocade store to fit our needs for the townhouse, the brocade products on display and on offer at the museum were nothing short of magnificent.