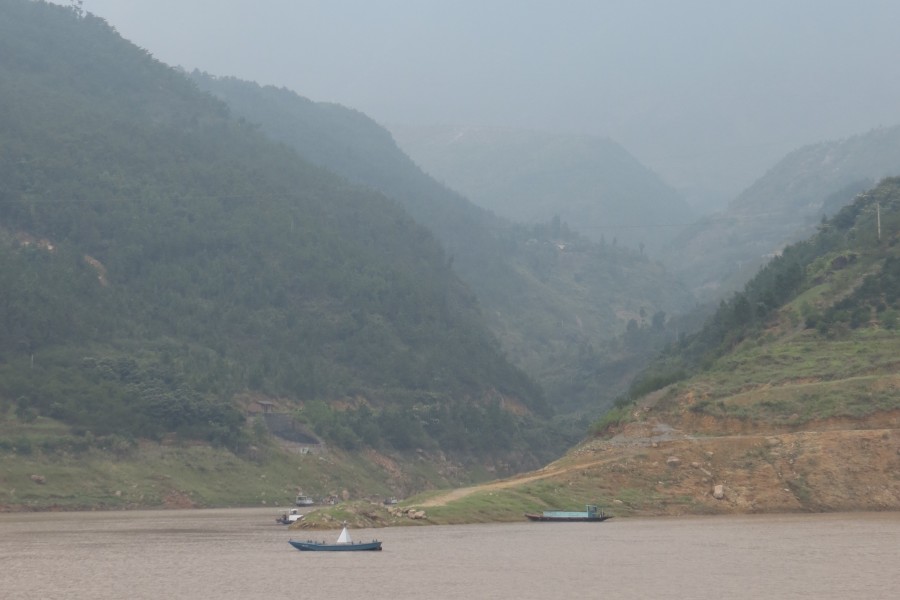 Read our previous posting at “Cruise Ships: The Yangtze Gold One!”

Our first day cruising down the Yangtze river towards the Three Gorges was rather quiet and uneventful.

I had purposely selected the three day (in reality two and a half days) downstream Yangtze river cruise, rather than the four day upstream one, partly because of the time factor, and partly because I supposed that going downstream would mean much less engine noise and vibration.

When I woke up this morning, I was surprised to realize that our ship, the Yangtze Gold One, was still docked in Chongqing. We had not moved an inch, even though we had been scheduled to leave Chongqing the prior evening at 10pm; the noise and vibration I had felt during the night came from the numerous cargo barges passing us by as we lay docked in central Chongqing. We actually departed Chongqing at about 6am, which was actually great since it allowed us to take in a full view of the ship going by Chongqing and down the Yangtze river. I should say limited view, because it was extremely foggy and would remain that way for a good part of the day as the ship made its way past miles and miles of skyscrapers, docks and factories. The Yangtze river is rather wide during the first day of the cruise; the river is supposed to narrow significantly when we arrive near the Three Gorges which we are supposed to go through on our second day. Those three gorges, Qutang, Wu and Xiling are sometimes considered as the number one tourist attraction in China, so we are looking forward to it.

We ventured out to breakfast this morning still reeling from the experience of the previous night, and very wary of what we would find. Meals are buffet style on these ships, and you are assigned a table. Well, it turns out that, probably because of what happened the previous evening, we got assigned the VIP restaurant on deck six rather than the main dining hall on deck two. This means that Lynn and I are assigned to eat in a restaurant which serves only three other tables, rather than the main dining hall which serves something like 300 people. The buffet in the VIP restaurant is a full buffet, just like in the main dining hall, and there is enough food to accommodate a hundred people. I can’t believe the layout of the breakfast buffet; in addition to everything you could hope for in a western-style buffet (eggs, hash brown, tomato, beans, bacon, sausage, etc…), there is an even bigger Chinese-style breakfast buffet, from congee to dumplings, from noodles to rice, etc… And yes, they have the egg and tomato dish I had been waiting to try all of this trip. This is breakfast heaven.

Lynn and I are learning some more Chinese words out of necessity. Lynn knows how to order lu cha (green tea), and I can now have my coffee tong (hot). We had to ask for kuaize (chopsticks) as the staff assumed we ate with forks and knives and assume that we could not handle the chopsticks; we are actually quite good at it now. There was a bit of a commotion at one point during breakfast; I could see the staff huddling around the buffet table, until one of them walked over to me carrying my toasted bread on a plate. He was very apologetic, and I could guess that he was asking me whether they should do another one. He pointed at a small spot of black on what was to me a perfectly well toasted piece of bread. I could only smile and reassure him that all was well.

We had similar buffet arrangements for lunch and for dinner, and I have been having my fill of Chinese noodles and assorted dishes, from spiced duck to pork feet with beans, from steamed seafood egg to Chinese pizza. We have come to know the staff well, and were even invited to join one of the other three tables for dinner as Lynn came to befriend a young woman who recently graduated from university and speaks enough English to communicate with us.

One advantage of being on a Chinese ship is that the shops on board have very reasonable prices; Lynn has been eyeing a large silk painting which might fit well in our townhouse.

We did have our massages in the afternoon. Mine was a bit of an adventure, as they first sent in a man to give me the massage. I objected, stating that I was not gay and wanted a woman. Yo Yo then came in, a young pretty woman, who then proceeded to treat my back like a piece of dough being rolled. For a while, I was wondering if I would survive the experience. But it did get better, and I particularly enjoyed the face and head massage which she gave me at the end. Having my eyelids massaged was definitely a first for me.

We briefly attended the captain’s welcome party, which included a dance performance by four couples all dressed in white (looked like wedding dresses to me) doing slow ballroom dancing on a stage. Free popcorn was included, although we arrived too late to get any. We elected not to go to the evening cabaret show, which was supposed to include both more dancing performances as well as Sichuan opera (which consists essentially of quick face mask changing at the beat of deafening drum noise).

Meanwhile,  the scenery and the landscape along the Yangtze river has been gradually improving. We are in for a treat.

Read our next posting at “Three Gorges Dam River Cruise!”