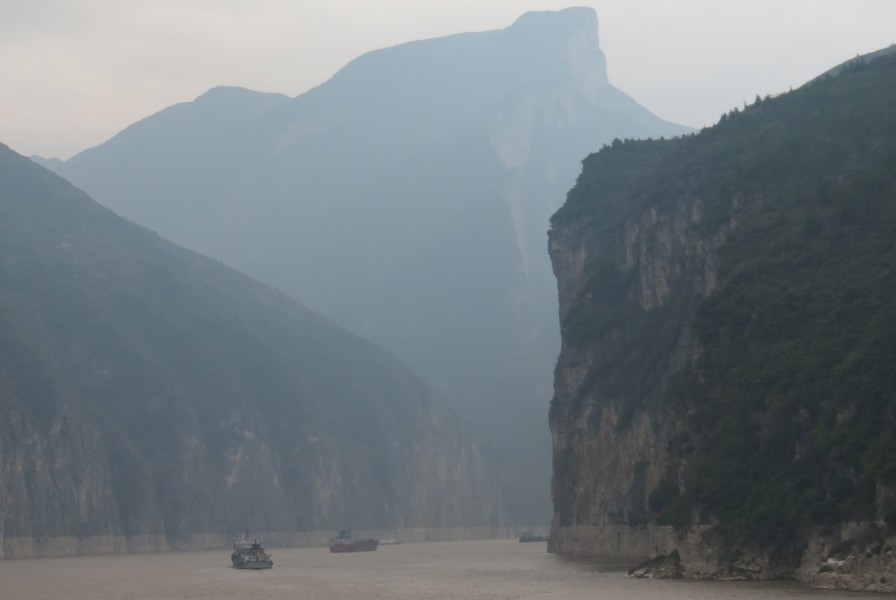 Read our previous posting at “Yangtze River Cruise and the Yangtze Gold One!”

Chang Jiang Huang Jin Yi Hao is the name of our cruise ship; it means Yangtze Gold One in Chinese, who don’t use the term Yangtze. For them, it’s Chang Jiang, the Long (or is it Eternal)  River.

It is two thirty in the morning as I start writing this posting. I have just woken up and realized, to my dismay, that our ship is in the process of docking against the hull of Yangtze Gold 2. We were scheduled to start going through the five tier locks of the Three Gorges dam at 11pm, but I fell asleep before then. Did I really miss the locks of the Three Gorges Dam? The water is totally calm, and the edges of the water are straight and man-made. This might imply that we are in a holding area, in between locks, so that there might still be a chance of more locks to come. We shall see.

In any case, we had a good day on the waters of the Chang Jiang, the Yangtze river.

We were docked in Baidu City this morning, with another cruise ship on either side of us. We have seen a lot of other cruise ships during the cruise, and I have every reason to believe that our ship is the best of them all. I have seen ships with no cabin balconies, with small outside areas, with a dirty and old appearance. The Victoria cruise line ships we saw, even though I am told provide the most attentive service, looked very small, old and dirty.

After another wonderful buffet breakfast, we elected to stay aboard rather than to take the excursion to Baidu City. Lynn and I went to talk to the silk painting artist on board, finally deciding on three silk paintings representing each of the three gorges. As we were talking with him, I overhead some beautiful music being played, which I recognized as the starting music of the movie Midnight in Paris. Lo and behold, a few feet away was the ship’s cinema, totally empty, with the giant screen showing the movie in english with chinese subtitles. We decided to sit down and watch it for a while, that is until a young female attendant approached us and told us that, unless we had a movie ticket, we would have to pay 55 yuan to watch the movie, and that included free juice and popcorn. We elected to leave and head for the forward lounge on deck five. After all, we were not taking a cruise in China in order to watch an American movie we have seen several times already.

A few minutes later, the young female attendant found us relaxing in the lounge and came to tell us that, even though we did not have a ticket, we were welcome to watch the movie. I would find out later that we were supposed to have received an envelope at check-in containing various tickets and info, something we never received; all I got was a room key!

At around 11am, right after the excursion group came back aboard, our ship left for its passage through the first gorge, Qutang gorge. It was indeed magnificent to enter and go through the narrow Chang Jiang between steep cliffs and tall mountains. The weather was still foggy, and the waters still brown and muddy, but we enjoyed it nevertheless. I took a lot of pictures and will have to go through them to see which ones best reflect what we saw, and whether any resemble the silk painting we bought of Qutang gorge.

After yet another fattening buffet lunch, we took what we considered the most important shore excursion of the cruise, the excursion down the Daning river, a subsidiary of the Yangtze, to what are referred to as the Lesser Three Gorges. The ship docked at Wushan, a small town of about one million people, and we took a smaller three deck tour boat down the Daning river, which got progressively narrower and narrower until two hours later, when it became so small we were all transferred to sampan style boats for a half hour trip further down the river.

The scenery was indeed magnificent. However, the logistics of it was disappointing to say the least, although informative and revealing. First, we were bombarded the whole time by the shrill and extremely loud and deafening voice of a chinese woman screaming what I assumed was descriptive tour information through the boat’s loudspeaker system. There was no place to hide from that noise, and no way to hear clearly what the english tour guide assigned to us tried to tell us. The boat was dirty, and the sole escape we could find from the crowd and the noise was on the top outside deck, which was not as crowded simply because we had to bribe the attendants to let us through under the pretext that we were buying their lukewarm undrinkable thermos tea. Of course, we had to put up with all the cigarette smoke on the top deck, because I guess that was the only place smokers could go on that boat. Not exactly what I would call a comfortable shore excursion.

The transfer into the sampans boat was a well organized mass production operation. You had the feeling of being canned into a sardine can. Tourists were leaving sampans on one side of the dock as tourists were entering sampans on the other, and then leaving in an unceasing procession, one behind the other. Once aboard the sampan, a Chinese stood up and started shrieking (I think he would claim to have been singing), and followed that act by going around the boat asking for “donations” in exchange for a flea market key chain. To top it off, we passed by a sampan boat moored by the edge of the cliffs where three Chinese attempted to “serenade” us, supposedly singing a folk song of the area; they were clearly people who had taken up singing late in life! It really sounded to me like machinery in need of greasing. After a while, the parade of boats simply turns around and goes back, which entitles you to be serenaded again as you go by the marooned boat a second time. The whole thing was tacky.

I was thankful when we finally returned to the peace and comfort of our ship.

The Yangtze Gold One then left to go through the second gorge, Wu gorge, even more magnificent than the first with its tall pointed mountain peaks. It was very windy outside, so we watched most of it from the comfort of the forward lounge on deck five, while we shared a beer and some snacks.

We returned to our cabin shortly before 7pm, the time which our english language program set for the captain’s farewell dinner in the main dining hall, only to receive a phone call telling us to come to the main dining hall as dinner tonight was table service (rather than buffet) and dinner was currently being served. We would find out that dinner had started at 6:30pm, which was the time given to the Chinese (everyone else on board). In any case, when we entered the main dining hall, we were informed that we had  been assigned table 20, not easy to find in this huge dining hall containing about 40 round tables full of people. We suddenly saw arms waving at us; it was the young Chinese woman Lynn had befriended in the VIP restaurant and her father, who were beckoning us to indicate that we were assigned to their table, table 20, which was full of people from their hometown, Guangzhou, the capital of Guangdong province and one of the largest cities in China. Clearly, they had organized to have us invited to their table.

What followed was a feast Lynn and I will remember for a long time. This was the type of Chinese meal I had come to experience when I came to China on business years ago. The round table of ten people had a large lady susan in the middle of the table, which is kept full of dishes by the attendants. One just turns the lady susan to take whatever food one likes. There are a dozen or so dishes on the lady susan, and as soon as a platter is finished, the attendants bring a new dish. We probably went through thirty different types of food or more. One of the Chinese men had brought a huge bottle of cognac which he shared with me; in return, I ordered a bottle of red wine, which Lynn and I shared with them. The conversation was extremely lively, despite the language difficulties; the young woman spent a great deal of time translating for us. I had a great debate with one of the chinese men about who was older (turns out I was older than him by eight days, as duly proven by our having to show our driver’s license).

Did we miss the Three Gorges Dam?

Read our next posting at “Yichang to Shanghai via Shanghai Airlines!”

« Yangtze River Cruise and the Yangtze Gold One !
Yichang to Shanghai via Shanghai Airlines ! »