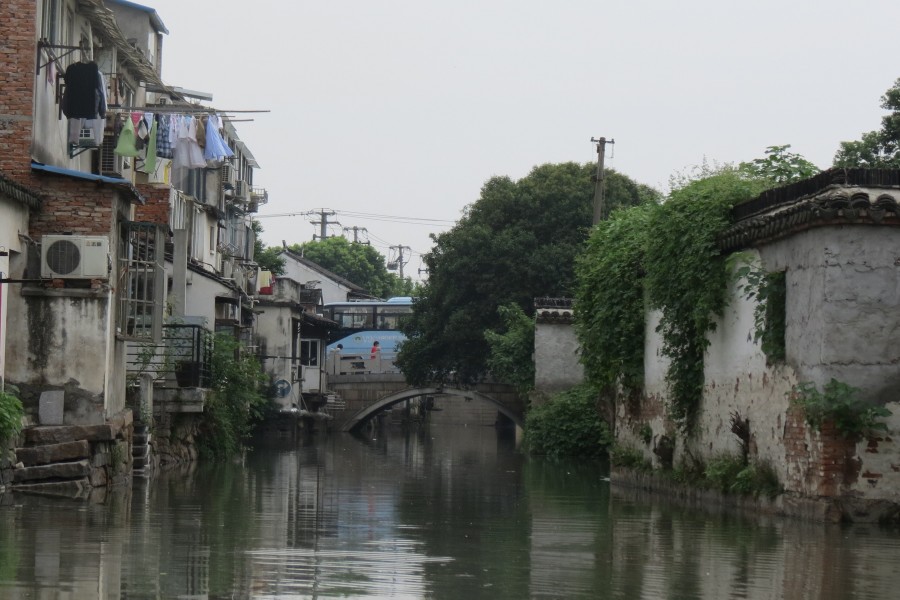 Marco Polo, the Venetian merchant who visited China around 1275 AD, wrote that if there is paradise on earth, it is in Suzhou and Hangzhou. I know Hangzhou well from my previous trips to China, and today we will be going to Suzhou, about 120km west of Shanghai. The high speed train gets there in 25 minutes, but we will be going by car, a one hour and forty minutes journey. This will give me a chance to compare the countryside to what I saw when I used to travel the area on business. Well, it has changed a great deal. There are still a few small villages surrounded by rice paddies as in the old days, but they have become hard to find. We traveled most of the way on a very busy eight lane highway (built in 1992) and saw mostly factories, warehouses, and interestingly, many clusters of high rise apartment buildings dotted all over the landscape. Mr Wong, our driver , paid 45 yuan (about $7) in tolls to get us to Suzhou.

The municipality of Suzhou counts more than 10 million inhabitants, but our guide says that only about one milliion live in the city itself. It is a very historical city, located along the Grand Canal between Beijing and Hangzhou. The Da Yun He (Grand Canal) was built several hundred years ago by an emperor for his wife, because she liked the lychee fruit from Hangzhou and wanted a good way to get the fruit to Beijing; so he had about 3.5 million people build the 1,100 mile long canal, the longest man made canal in the world.

Suzhou was known as the Venice of the East because of its many canals. It became also well known for its gardens. Suzhou was conquered and ransacked by a number of people over the centuries, the latest ones being the Japanese in World War II, who destroyed a lot of the city.

Our first stop is the Humble Administrator’s Garden, a garden complex which has been restored and is quite large at 5 hectares. It used to be a private garden which an official built for his aging parents; unfortunately, they died before the garden was finished. The garden is surrounded by dozens of tourist shops which one cannot avoid either to reach the entrance or to leave the gardens. There is a large number of ponds full of lotus flowers, as well as many Chinese buildings and bridges. I was totally surprised by the number of tourists, and more annoyingly, by the large number of tour group guides using a loudspeaker to make commentaries to their groups. I found it impossible to enjoy the garden, and rushed Lynn quickly towards the exit. I frankly don’t see any reason to recommend a visit of this garden in Suzhou to anyone who has already seen Yu Yuan garden in Shanghai.

After walking through the unavoidable shop area at the exit of the garden, we made our way to the water edge and embarked on a sampan type boat for a ride down a small canal road. The most interesting part of that boat ride to me was not the old buildings and trees along the edge, but the elderly character piloting our boat. He had a great smile and a great voice as well, as he proceeded to sing us a couple of folk songs from the area. The Daning river entertainers, from our cruise down the Yangtze river, should take lessons from this guy! It turns out that a very small part of Suzhou has water canals any more. The rest of Suzhou is a bustling city with no special redeeming characteristics.

We proceeded to the downtown area and the pedestrian shopping area where our lunch restaurant was located. I had reserved at Song He Lou, a 400 year old restaurant which specializes in one of the most famous dishes in China, the Songhu Guiyu (squirrel mandarin fish). Since they only take reservations for the private rooms (usually located on the second floor), that is what I reserved. It was a very nice big room, sort of like a large hotel room with a bathroom except that the only furniture consists of a large round table with a big lady susan, a serving sideboard, and a coat rack. Each room has an assigned waitress. By making this reservation, I had committed to spend at least 800 rmb ($125) on the food.

I had invited both our guide and our driver to join us for lunch, and I quickly ordered what we wanted: the squirrel mandarin fish, a platter of four vegetables (bok choy, water chestnuts and two others I forget), the famous Suzhou tang mien (Suzhou noodle soup), and the even more famous Suzhou luobosi Su Bing (fried turnip cake). To drink, rose tea, bottled water and coca cola. The waitress did not look happy and stood there motionless.

I asked our guide what was going on. He said that our order amounted to no more than a couple of hundred yuan, so she could not process it; she needed 800 yuan worth of orders to meet our minimum. So we started adding dishes. Crispy duck, a platter of assorted Chinese peas, a platter of tofu and radishes, a platter of fried shrimp. No, that was not enough. OK, add another noodle dish, noodles fried soy sauce. and a platter of fruit at the end.  We then added more drinks till we had finally succeeded in topping 800!

Needless to say, we proved totally unable to eat but a fraction of the feast which we were then served, despite the help which the driver and our guide tried to give us. Lynn’s main comment about the food, which was excellent, was that it uses a lot of sugar and soy sauce. We left the restaurant full and bloated, and decided there and then to skip dinner that evening.

We made our way to the Suzhou No. 1 Silk Factory, since Suzhou is also renowned for its silk, and this factory is supposed to be one of the largest in China. Lynn spent some time looking at the offerings in the very large shop which is attached to the factory.

No, Suzhou is not paradise on earth, at least not anymore. We decided to skip the scheduled visit of a second garden in Suzhou in favor of returning to Shanghai and walking town Nanjing Road, the busiest pedestrian shopping street of Shanghai, which is exactly what we did. A long line of people at one of the stores along the street turned out to be people waiting to buy the store’s moon cake, which all Chinese will eat during the Mid Autumn festival next week.

On the way back to Shanghai, our guide instructed us on how numbers are shown with a hand differently than the way we do it. The numbers six, seven, eight and nine are shown with the hand imitating the image of the Chinese character for that number, oxhead for six (thunb and last finger up), chicken feet for seven (all fingers together pointed horizontally), I forget what for eight, and a sea horse for nine (thumb and first finger in a half circle). Will I ever have to use this newly acquired knowledge?

Read what happens next at “Guilin China : the postcard city!”