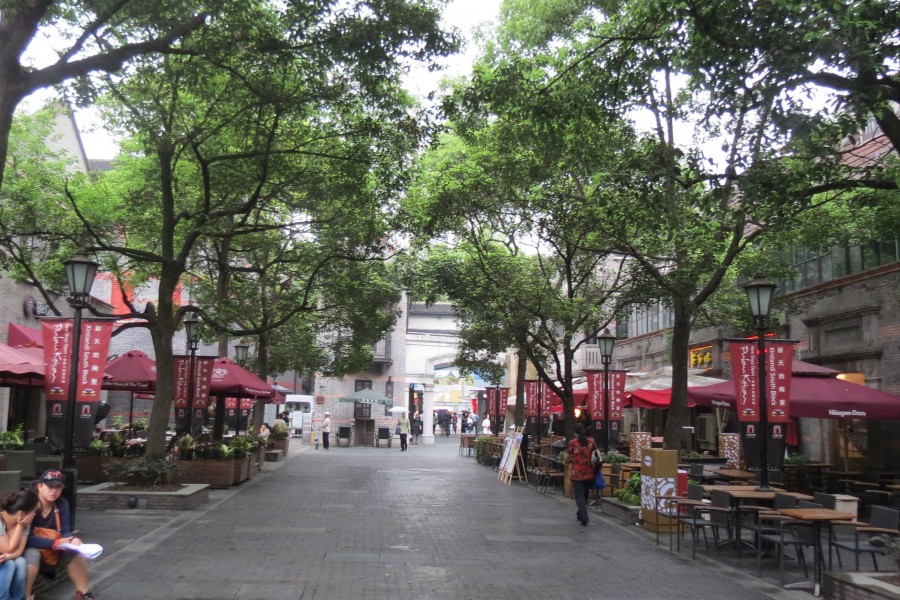 Read our previous posting at “Shanghai : The future of China!”

It is eight in the evening as I start writing this posting. Darkness has come to Shanghai, but the Huangpu river in front of me is full of ships decorated with neon lights of various colors; the ships themselves are of all shapes, from old galleons to sleek multideck yachts. But they are all illuminated in bright colors and are going up and down the Huangpu river in front of the Bund, itself illuminated by all the lights of the colonial buildings and of the boardwalk. It is a sight which I wish my brother Simon would see, as he loves boats as much as I do. He probably would be able to figure out a way to take a photo of this scene; I tried myself but the reflection from the hotel room window ruined my photos. I did get some pictures in the morning, when an unceasing procession of cargo barges makes its way past the Bund.

In my blog for yesterday, I forgot to mention that, when we were finishing dinner at Jade on 36, after we had ordered and eaten our dessert, the restaurant brought us a complimentary anniversary chocolate cake with a ‘happy anniversary’ card made of chocolate. We had not yet eaten the box of dark chocolates we had received on arrival, nor the golden chocolate statue of a couple embracing surrounded by heart-shaped chocolates we had received soon afterward (well, I admit we had eaten most of those hearts).  We will have to increase significantly our chocolate consumption between now and our departure on Saturday morning.

This morning, we left the delightful Pudong Shangri La hotel for the French concession area, the part of Shanghai which used to be controlled by France for the hundred years or so between the creation of the International Settlement in the 1840s until the second world war. Did you know that there are seven tunnels and five bridges crossing the Huangpu river between Pudong (east part of the river) and Puxi (west part of the river)? Unfortunately, today was a day of rain in Shanghai so it dampened a bit our ability to fully enjoy our tour of the city.

The French concession part of Shanghai is without doubt my favorite part. The streets are lined with French trees on both sides, and those trees tend to meet up above the middle of the street, creating a shaded relaxing atmosphere perfect for strolling along the usually wide sidewalks of the area. You could easily make the mistake of thinking that you are in Paris. Naturally, we started with Avenue Joffre, now called Huaihai Road, and made our way to Xin Tian Di (A New World), an area of shops and outdoor cafes that would make Paris proud.

As we walked through a beautiful park in the area, our guide remarked that there were very few pigeons around because some Chinese people had the habit of coming at night to steal them and eat them. We also went by a very large Apple store with a long line of people outside, probably waiting to buy the IPhone 5 which was announced earlier today in the USA.

After our walk through Xin Tian Di, we headed to another part of the French Concession Shanghai, Tian Zi Fang lane, a maze of small alleys full of shops and restaurants. Quite bohemian in style, the maze is full of very eclectic establishments. You will find here everything from New York style pizza to spicy Thai food, belgian beer as well as chinese noodle shops.

Our guide then led us to a typical Shanganese restaurant, Home’s on Julu Lu. He wanted us to try what he considered to be the best Hongshao Rou (pork cooked with soy sauce) in the city. We also had another Shanghai specialty, No Rou Li (Beef in small pieces, served on a rice cracker with mushrooms) as well as Shanghai bok choy (Ji Mao Tai).  According to Steven, our guide, the following is the proper order of food during the meal here in Shanghai: cold food, then meat, then vegetables, then soup, then dim sum/noodles/rice, then fruit.

Steven also indicated that most Chinese do not drink black tea; they drink green tea (Lu Cha), made from dried tea leaves. When Lynn asked him how close was the closest beach, he said one hour and twenty minutes for a beach where people wear no clothes. I am not sure whether I understood correctly; I will have to personally check that one out.

After lunch, with the rain increasing, we visited several parts of Shanghai in search of a good painting to purchase. That included the Shanghai Art Museum as well as the gallery at the Shanghai Grand Theatre.

For dinner, we went to Xinguang Jiu Jia, a restaurant specialized in one of the most famous delicacies of Shanghai, the hairy crab from Yangcheng lake. The hairy crab season is September and October, so we are in luck. People come from as far away as Taiwan and Hong Kong to eat at this restaurant. Our dinner consists of a set banquet menu of six dishes (the most basic banquet menu as the restaurant offers much more elaborate menus): 1. steamed crab claw meat 2. stir fried crab leg meat with asparagus 3. stir fried crab meat and crab roe 4. stir fried crab roe with mung bean noodles 5. dry noodles with crab meat 6. mini crab meat wonton scallion flavored soup made with crab meat.

As if that wasn’t enough, we headed for the Horizon Club lounge after our return to the hotel, initially looking for a glass of cognac, but ending up with two glasses of wine and some food still available from the happy hour offerings. On the way back to the hotel, Lynn was commenting on the large number of people out on the streets and in restaurants. The people in the city of Shanghai are out in the evening; this is not how it used to be.

Read what happens next at “Suzhou : paradise on earth?”

« Shanghai: the future of China
Suzhou: paradise on earth? »