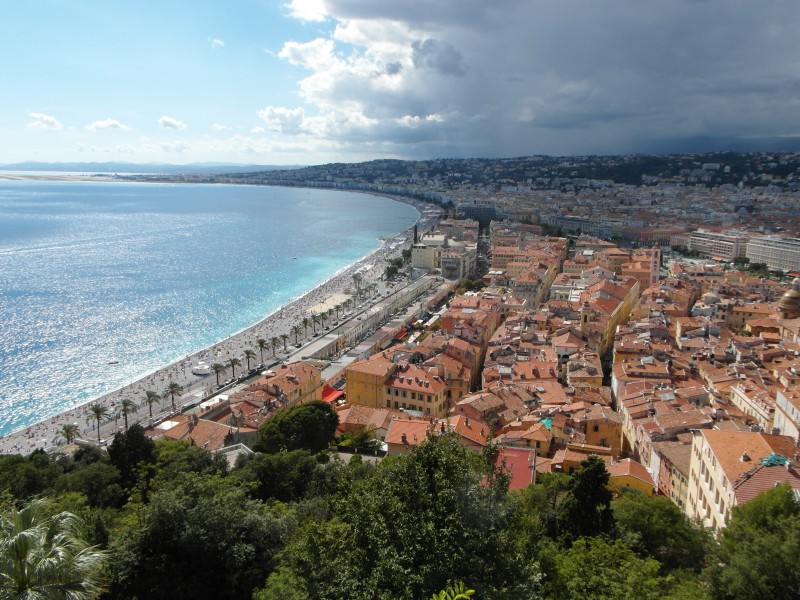 Making the headlines these past few days was the $136 million jewelry heist made in broad daylight by a single man from the Carlton Hotel in Cannes on the French Riviera. Since we are scheduled to leave for the French Riviera in a few weeks, the news caught my attention. We have rented an apartment in Nice, the largest city on the Cote d’Azur, for about three weeks, and the question must be asked: is Nice still nice?

Excluding our recent one day trip to Marseilles to taste once again its bouillabaisse in the old port, the last time we spent any amount of time on the Cote d’Azur goes back almost thirty five years. In those days, in the mid-seventies, the major issue in France related to the 800,000 or so pieds-noirs (“black feet”) who had emigrated to France during the sixties, following the end of the Guerre d’Algerie (“Algerian War”) in 1962. The pieds noirs were French citizens born in Algeria who had to leave all their possessions behind and they made up most of the ghetto suburbs of the large French cities. My closest co-worker in my first job in France in 1974 was a pied-noir, a charming man who as a hobby liked to raise pigeons for his dinner table.

France is a very different country today, following the expansion of Europe and other globalization trends. The largest minority in France today are the more than five million muslims who have mostly come from the Mahgreb and other past colonies of France in Africa. Twenty five percent of the population of Marseilles is Muslim; I don’t know the ratio for Nice, but I would not be surprised if it were a similar percentage. There are almost ten times as many muslims in France as there are Jews.

Last year, the French government created fifteen special zones (zones de securite prioritaires or zsp) which would receive extra police attention in an effort to reduce the soaring crime rate. The mayor of Nice was furious that Nice had not been initially included in the zsps, claiming that Nice also had areas of “deeply rooted anti-social behavior”; Nice made the zsp list in early 2013.  Recent reports that crime in the Nice zsp had gone down by 20% in the first half of the year are not sufficient to alleviate my concerns.

I am well versed in the art of eliminating the risk posed by pickpockets. However, we are talking more here about the risk of being mugged, assaulted, raped, etc…, a whole different level of risk requiring different steps and plans. I may well have to change my habit of carrying all our valuables in my hidden pant pockets; that is an effective deterrent against pickpockets but won’t go very far with a band of thugs. This may well affect our daily schedule; for example, if walking the streets at night is not safe, we will switch to having our big meal at lunchtime and having a light dinner at home. If walking to the train station is unsafe, we will have to take a taxi. And so on.

I have three weeks or so to study the situation of the Nice zsp and prepare. But we will have to be there to really find out : is Nice still really nice? Stay tuned on my travel blog, BonVoyageurs.com, and find out!

Read our next posting at “Eden Roc : Lunch at Hotel Cap Eden Roc in Antibes!”