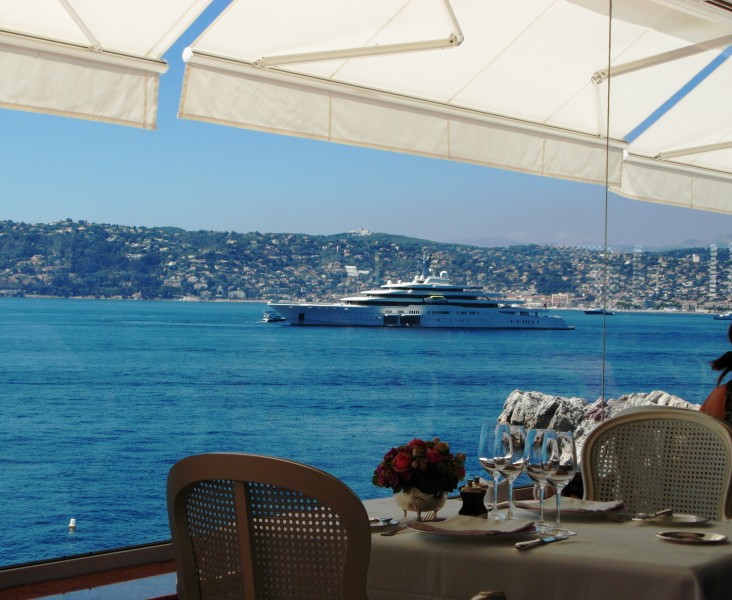 I have asked for a lunch reservation at the Hotel du Cap Eden Roc in Antibes. Yes, the beautiful restaurant terrace overlooking the Mediterranean where a simple starter salad like a Salade Nicoise will cost you US$80. Visiting this hotel for its phenomenal position on the Cote d’Azur and its gastronomic excellence might be reasons enough for the well heeled, and they have indeed done so. But why would WE go there for lunch?

Well, for one thing, staying there is nowadays quite costly, with the cheapest room going for about US$1,000 per night. But we do need to go there because of the historical significance of this hotel and its importance in the world of art and literature.

Started as a writer’s retreat in 1870, Villa Soleil was transformed into Hotel Cap Eden Roc by Antoine Sella at the turn of the twentieth century. Initially open only during the winter months, which was when the English and Russian aristocracies used to visit the French Riviera until the first world war, the hotel started to open some rooms for the summer when Gerald and Sara Murphy wanted to visit Cole Porter who was renting a villa nearby and they convinced Antoine Sella to keep a small staff and a floor open for the summer. Gerald Murphy had been a schoolmate of Cole Porter at Yale and is even said to bear some responsibility for encouraging Cole Porter to write and sing songs.

By the time they descended on the Cote d’Azur, the Murphys had become close friends of Pablo Picasso in Paris. Gerald loved Picasso’s art, and Picasso loved Gerald’s wife, Sara, who is said to have become his muse. The Murphys invited Picasso down to Antibes and he agreed, coming with his young beautiful Russian wife of the time. The Murphys were also friends of F Scott and Zelda Fitzgerald, and the Fitzgeralds also came down to the Riviera. F Scott Fitzgerald, who apparently liked to test the sexuality of his friends, had fixed up Gerald with a young South American man, Eduardo Velasquez, who had just been ejected from England for having had an affair with a male member of the British royal family.

F Scott Fitzgerald wrote The Great Gatsby  while in Antibes, and a couple of years later, he wrote Tender is the Night , which was published in 1930. Gerald and Sara Murphy are the models for Dick and Nicole Diver in that book.

George Bernard Shaw was a regular customer and returned for many years at the Hotel Cap Eden Roc. The Duke and Duchess of Windsor were married at the hotel after he abdicated the throne in England.

After the war, Picasso rented or bought the Grimaldi castle nearby in Antibes and came to eat frequently at the hotel. The Chateau Grimaldi is now the Picasso Museum in Antibes, and that is why our plan is to visit the museum in the morning and then have lunch on the terrace at the Hotel Cap Eden Roc.

Marc Chagall was also a frequent customer of the hotel.

Since that time, the Hotel Cap Eden Roc has received the most important guests in the world, from Eisenhower to Churchill, from Kennedy to Madonna, etc…

That is why I have made a lunch reservation at the Hotel Cap Eden Roc for Wednesday September 4th at 1pm.

Read our next posting at “Salade Nicoise et la cuisine nissarde : Best of Provence and Italy!”