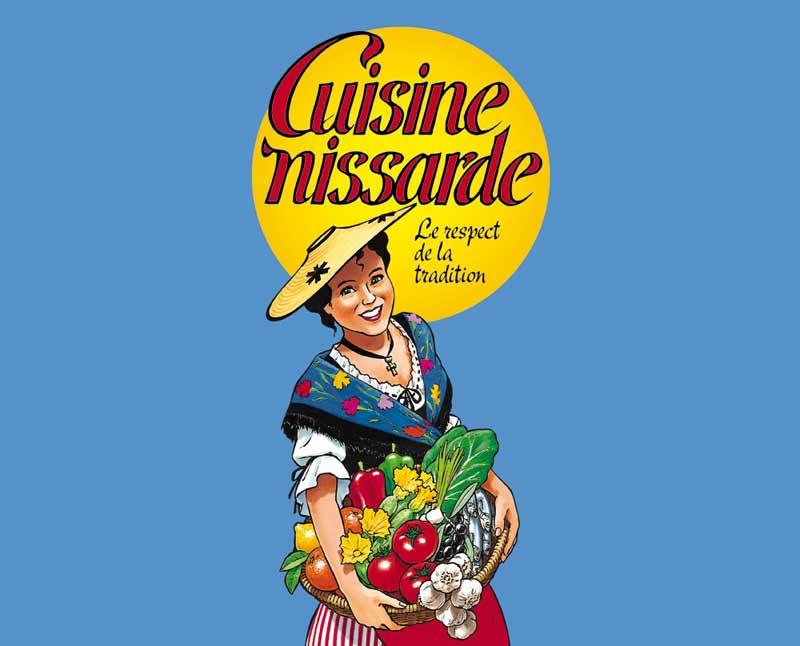 When one thinks of Nice, one immediately thinks of Salade Nicoise, that refreshing summer day salad which seems to always include tuna, anchovies, hard boiled eggs, olives, corn, boiled potatoes and green beans. As I prepare for our trip, I am discovering, much to my delight, that there is a lot more to the cuisine of Nice than salade nicoise. But before I get into the details of my findings, I do need to mention that the salade nicoise, as we know it, may not be the real salade nicoise after all.

Le Cercle de la Capelina d’Or is a committee of people from Nice set up to defend the honor of the real authentic salade nicoise. Approved ingredients include tomatoes, hard boiled eggs, salted anchovies, tuna, onions, basel and olives from Nice, with garlic, salt and olive oil. In season, beans, artichokes, hearts of celery and/or green pepper may be added. But it is blasphemy to include potatoes and green beans, and even more heretical to add corn to the mix. It was apparently the renowned chef Auguste Escoffier, the pope of French cooking, who committed the sin of adding potatoes and green beans to the recipe for salade nicoise. The committee is quick to point out that Escoffier, whom we all thought came from Nice, is actually not a local, since his neighborhood of Villeneuve-Loubet is separated from the center of Nice by a small river!

I was quite unaware that the region of Nice has its own cuisine, called cuisine nissarde. I was even more ignorant of the fact that the people of Nice had their own language (which explains why they say nissarde instead of nicoise), still spoken and written a bit around town. This all comes from the fact that Nice, up until 1860, was part of Italy not France. The whole French Riviera, starting past Antibes eastward was until then part of the Italian Riviera. During the seventeenth, eighteenth and nineteenth centuries, the ownership of Nice shifted back and forth between French and Italian lords, kings or emperors. In 1860, the Italians gave the region of Nice to France as a reward for France’s support of the second war of Italian independence against the Austrian empire; this was supported by a referendum held among the local population. Giuseppe Garibaldi, one of the founders of modern Italy, was opposed to the cession and claimed that the referendum had been rigged by the French. Italian nationalists ever since have laid claims to the region. And that is why, during the second world war, Nice was briefly given back to Italy by the Germans and was run by Italy during 1942 and 1943. I did not know that; no wonder the people of Nice would want their own language!

Not surprisingly, given that the ownership of Nice went back and forth between Provence and Italy, the impact of all this history is that the cuisine of the region is a blend of the cuisine of Provence and the cuisine of Italy. Since those two cuisines happen to be individually among my favorite foods in the world, I am in seventh heaven and eager to discover the many unique dishes of the region. Here are some of the most famous ones: Salade Nicoise, Ratatouille Nicoise, Daube Nicoise, Raviolis Nicoise, Gnocchi Nicoise, Farcis Nicoise, Ganses Nicoise, Sardines Farcies a la Nicoise, Pan Bagnat, Poche de Veau Farcie, Tian de Courgettes, Pissaladiere, Tarte de Blette, Beignets aux Pommes, Socca, Stockfish. So much to learn and to enjoy! And I can drown all that great food with the local wine, called Bellet wine, grown in the hills behind the city for centuries.

The cuisine seems to be based in large part on fresh vegetables, seafood and pasta. I can’t think of a better combination. I am overjoyed at the possibility of being able to buy freshly made pasta when I go out to get the morning baguette, croissants and pains aux chocolat. Actually I expect we will be eating our main meals out most if not all of the time. Fortunately, many restaurants in the region claim to respect the tradition of the cuisine nissarde and I have time to go through the list to pick my favorites. I was looking at some of the menus and they are indeed appetizing.

So I have a lot of work yet in store to prepare for the trip. Checking out the recipes of the cuisine nissarde dishes, checking out the restaurants and their menus, learning about the Bellet wine and its vineyards. Spaghetti aux fruits de mer, here I come!

Read our next posting at “Cocteau : “L’Oisivete me fatigue (Idleness tires me) !”