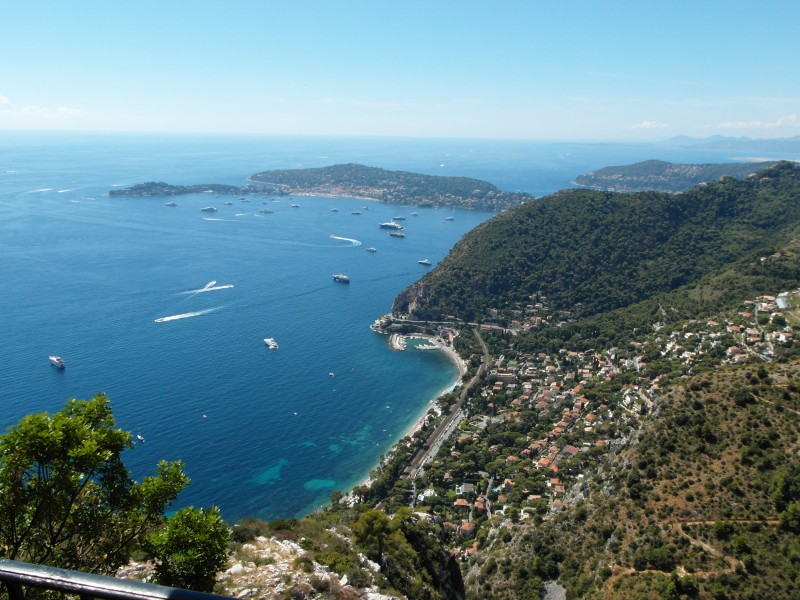 Chateau Eza : View of Beaulieu-sur-Mer, the bay of Villefranche-sur-Mer and Cap Ferrat

Eze, one of the most spectacular of France’s imposing “Villages Perchés” has a principal attraction other than its breath-taking 360 degree views … the Michelin- starred restaurant, Chateau Eza, named for the charming hotel in which it resides. Naturally, this restaurant’s reputation for excellent cuisine combined with the views was irresistible. So on our third full day we found ourselves on the bus … mesmerized by the views … as we winded our way up to the base of Eze. The rest of the climb up the steep, narrow streets to the top of this Medieval village was by foot, but so absorbed were we in enjoying the views that we hardly minded the steep climb.

So what is “gastronomy”? I like to think of it as the art and science of cuisine, preparing food with the best quality ingredients – regional produce is often the preference — using time-honored techniques, tasting as you go (a chef must have refined taste buds), and producing with significant expertise a nutritious work of art, as beautiful to look at as it is to taste and savor.

Watermelon & Strawberry Gazpacho with a touch of Coriander

Along with their à la carte menu, the Chateau Eza offers two different menus du jour. We selected the more extensive one which they very aptly call the “Menu du Prince”. Voilà the menu which we enjoyed with a very satisfying Côtes de Provence Rosé …

Filet of local Veal under Crust with Nicoise Olives & Tomatoes

A truly memorable meal which enchanted our taste buds, was highlighted with extraordinary views of the Mediterranean sea, Beaulieu-sur-Mer, Cap d’Antibes, Cap Ferrat and Nice … in a magical hilltop setting perched at the edge of the cliff.