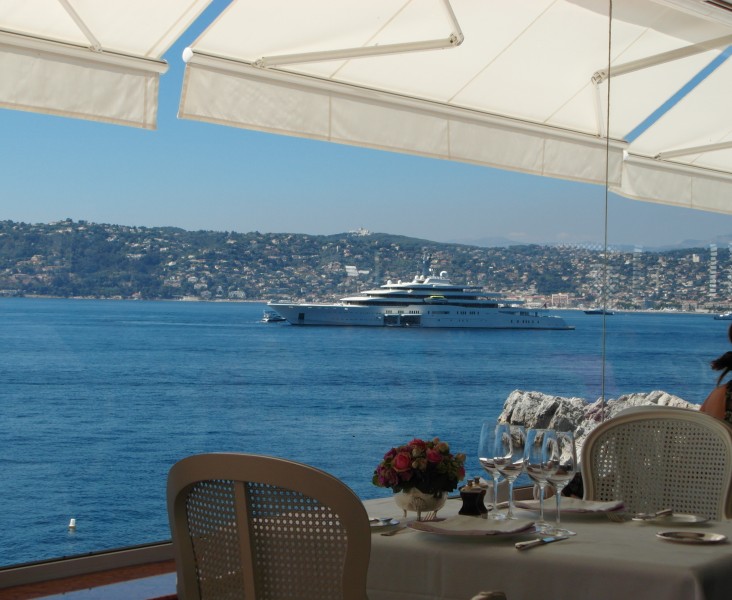 Having substantially recovered from my somewhat stressful first experience with the electric car sharing service, Auto Bleue, we elected to try it again today for our trip to the Cap d’Antibes peninsula, about 15 miles southwest of Nice. That is the area made famous by F. Scott Fitzgerald, which explains why we have lunch reserved at the Hotel Cap Eden Roc of Gerald and Sara Murphy fame (see our posting of August 2nd 2013) . The peninsula also includes Antibes, where we plan to visit the Picasso museum, and Juan Les Pins along the coast, where F. Scott Fitzgerald rented a villa for a couple of years, Villa Picolette (currently up for sale at an asking price of 27.5 million euros, or about US$33 million). Juan Les Pins is also known for Rudolf Valentino and Charlie Chaplin who used to party there in the good old days, as well as for the King of Saudi Arabia, who owns a large estate there. 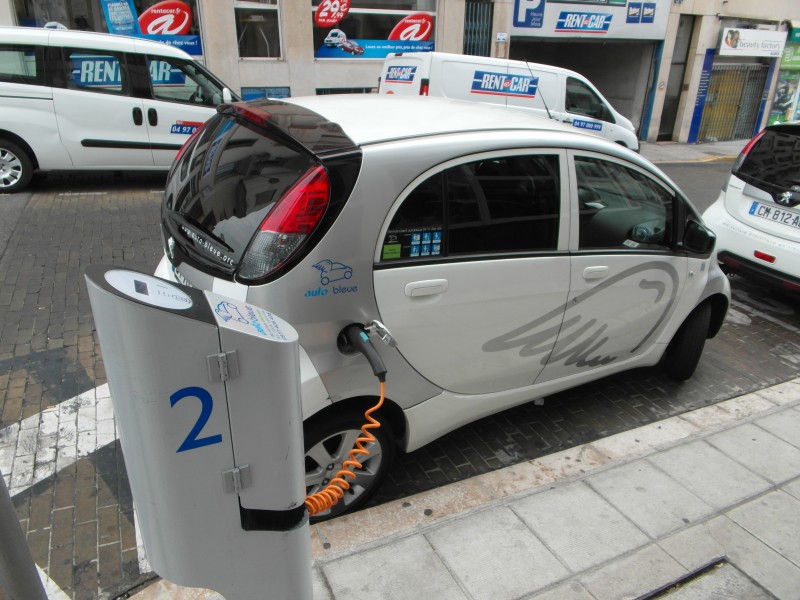 The Auto Bleue Peugeot IOn electric car looks minuscule from the outside, but, I assure you, once you are on the road, you feel on an equal footing with the other seemingly minuscule cars on the road. It is only when you pull up at the valet entrance to the Hotel Cap Eden Roc behind a lamborghini that you feel your car does not quite measure up!

The electric car has a 100km (about 60 miles) range so we must be aware of the distances driven, although large displays on the dashboard make sure one knows the remaining range. We are afraid to put the air conditioning on in the car since we found out that it runs down the battery and reduces our range; on the positive side, however, having the windows open is not really an issue since the weather outside is picture perfect. Another day of a cloudless azur blue sky with a temperature between 75 and 80 degrees. 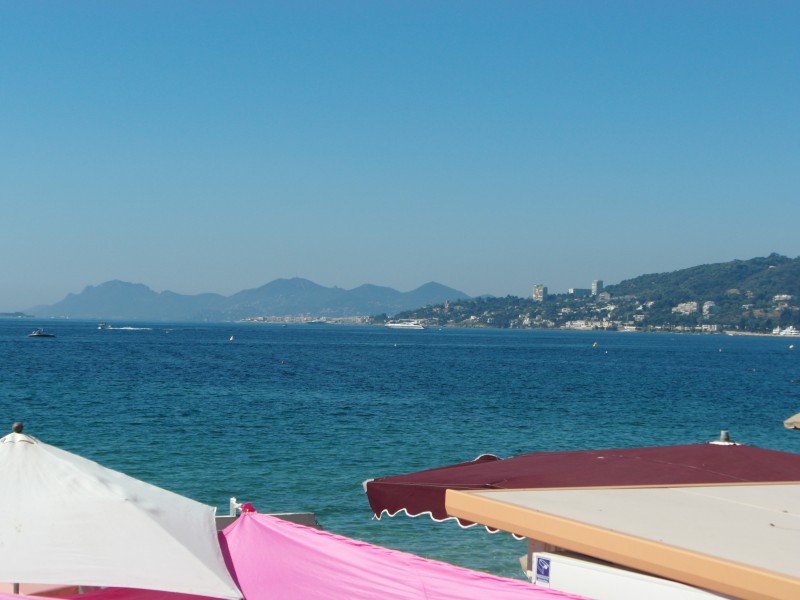 Antibes : View of Cannes from the beach in Juan Les Pins

Our first stop is Juan Les Pins, just west of Cap d’Antibes. The town is a bit out of the way of the main roads and as a result is pretty much a self contained beach resort with a sand beach (vs a pebbles beach as in Nice) and all the services to cater to beach vacationers. There seemed to be lots of restaurants along the beach as well as in town, and dozens of shops and boutiques catering not only to French but also to foreign tourists. 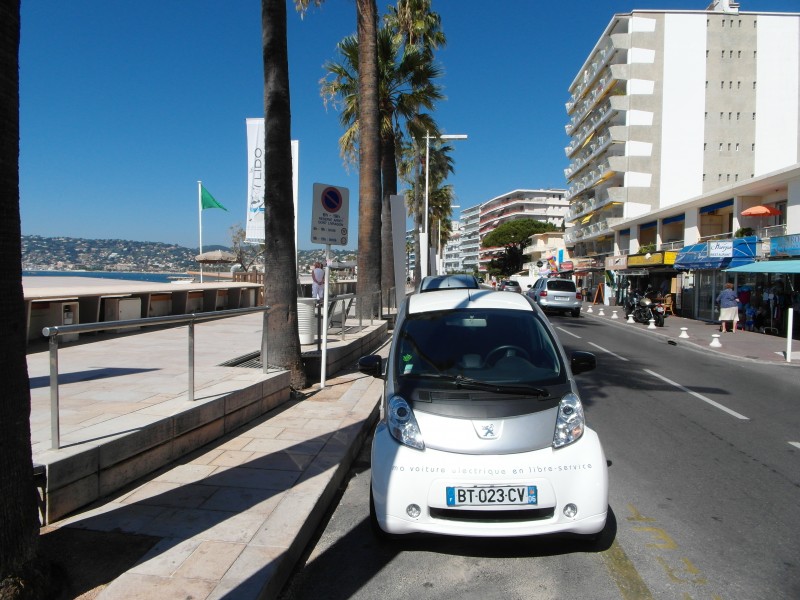 Antibes : Our Auto Bleue electric car on the beachfront in Juan Les Pins

If one did not wish to travel to other locations on the French Riviera, and merely wanted an excellent French Riviera beach resort, Juan Les PIns would nicely fit the bill, much better than Cannes could. Rick Steves’ characterization of Cannes as “superficial” is so much on the mark. 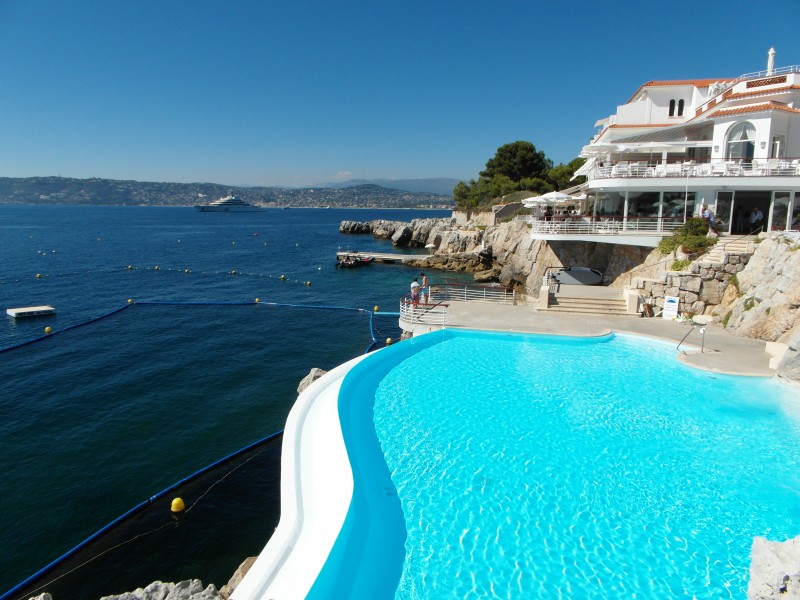 We drove along the shoreline to the Hotel Cap Eden Roc restaurant situated at the tip of the  Cap d’Antibes peninsula. For some reason, I remembered the hotel as pink-washed. In fact, neither the main hotel building nor the restaurant building were pink-washed, they were more like pale yellow-washed.

There were a couple of mega yachts anchored just off the restaurant, providing an added touch (as if it needed it!) of opulence to this retreat of the super rich. 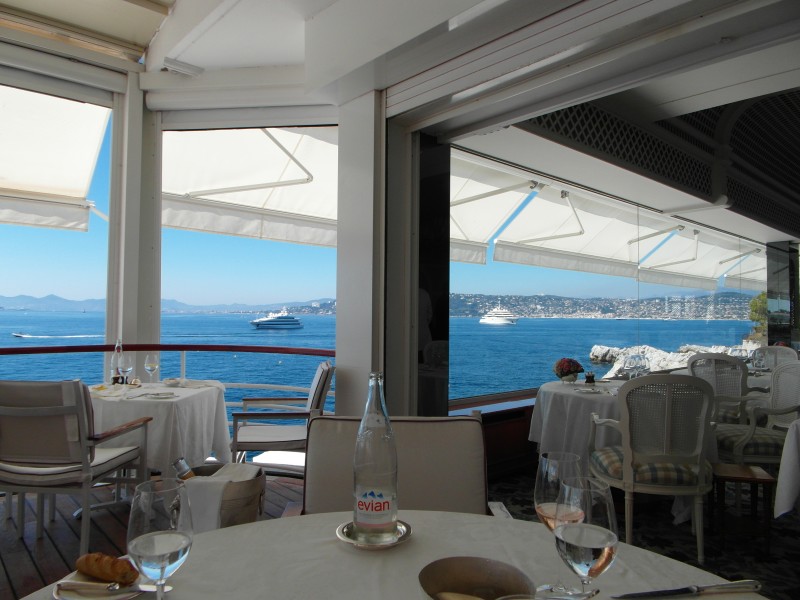 We sat down to a decadent two and a half hour lunch, which we thoroughly enjoyed as we admired the superb views around us. 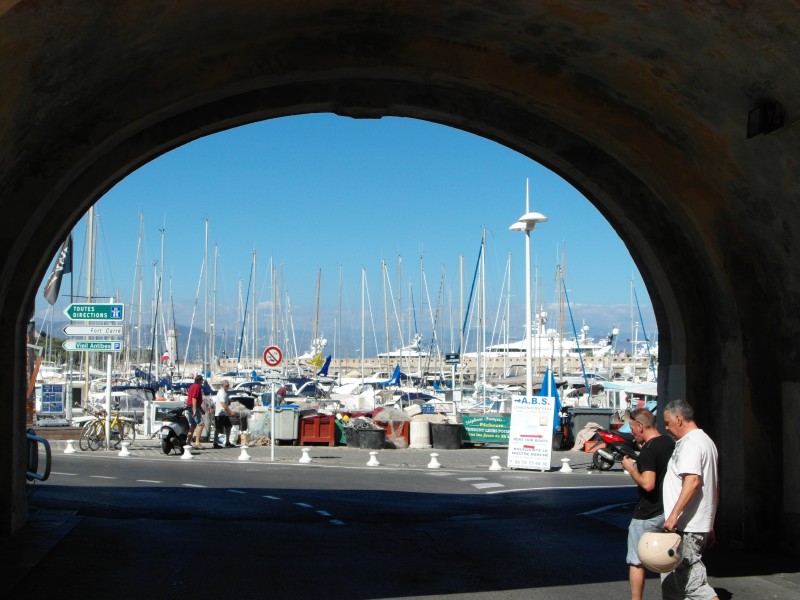 Port Vauban marina right outside the walls of old Antibes

We then drove up to Antibes, the old part of Antibes, and found a parking spot in Port Vauban, right outside the walls of the old town. Port Vauban is the largest yacht marina in Europe (possibly the world?) and includes the well-known Quai des Milliardaires (Pier of the Billionnaires), where the mega yachts are docked. 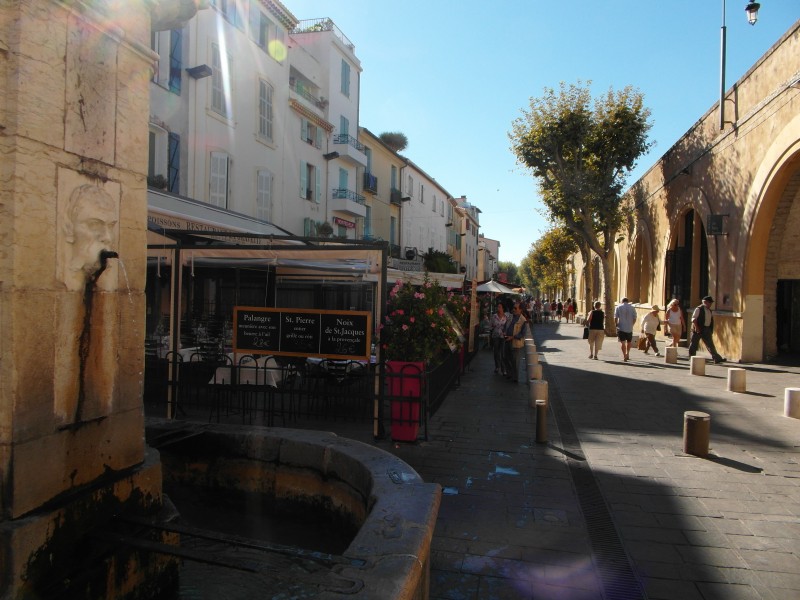 We walked the old town of Antibes, which seemed quite attractive with lots of cafes, restaurants and boutiques. I suspect the area is quite lively in the evenings. However, the whole area impressed me as being heavily traffic congested and I suspect is a lot harder to get around in than either Nice or Cannes. 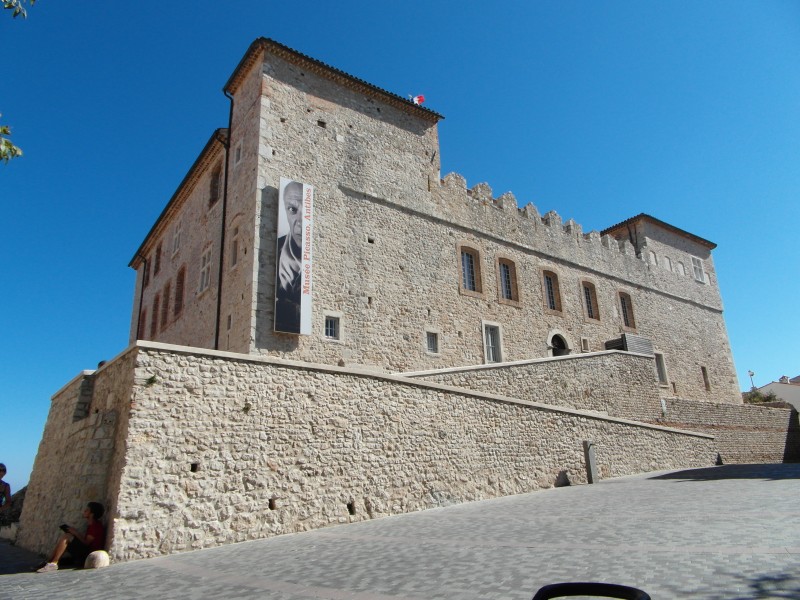 We ended up at the Musee Picasso, housed in what used to be the Grimaldi Museum. The change of name was apparently justified by the fact that the museum lent a room to Picasso for two months back in 1946 (someone clever organized that one; they now can attract more people and charge a higher entrance fee). At the entrance, I noticed a phrase from Pablo Picasso which I found interesting: J’ai mis toute ma vie a savoir dessiner comme un enfant (I took all my life to learn to draw like a child).

Essentially all of the Picasso drawings, paintings and sculptures are on a few rooms on the top floor. Two in particular attracted my attention. 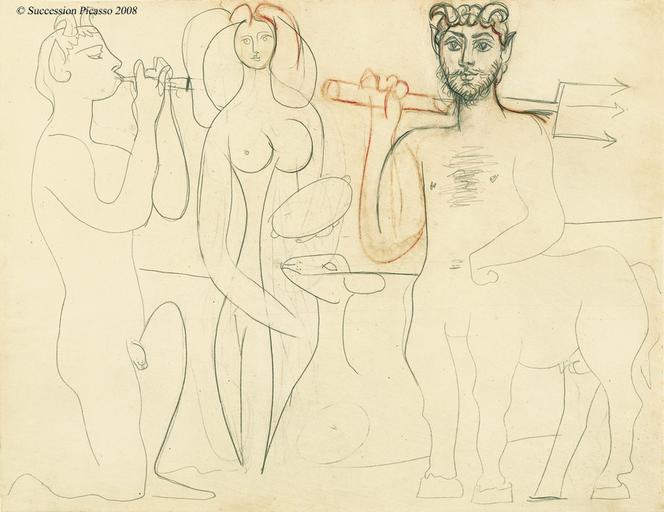 The first one is a Picasso drawing called Faune agenouille jouant de la diaule, Nymphe debout au tambourin (Faune kneeling down playing the diaule, Nymphe standing up with a tambourine).

The second one is a 1946 Picasso painting called La Joie de Vivre! Since Joie de Vivre is central to my philosophy of life, I found myself studying the painting for clues as to Picasso’s own views on the subject. I have to agree with him that a happy dancing naked woman is central to joie de vivre, and I also agree with Picasso that music and animals are essential contributors. 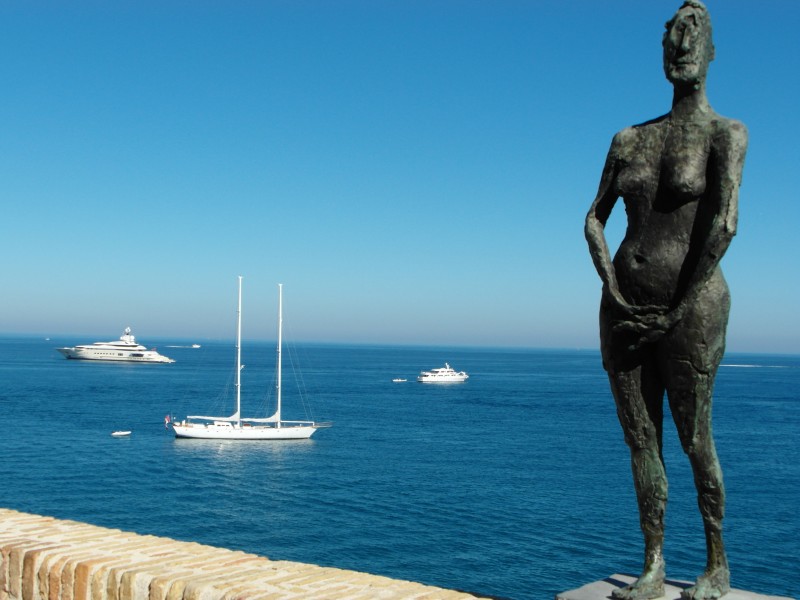 Antibes : A view from the terrasse of the Musee Picasso in Antibes

After relaxing for a while on the beautiful terrasse of the museum, we departed back to Nice, driving along the sea to provide us with views of the beaches and the Mediterranean along the way.

Did you know that water skiing was invented in Antibes in the 1920s?

« Saint-Jean-Cap-Ferrat, France ~ This Cape is made for walking …
Luncheon inspired by Tender is the Night »