Luncheon inspired by Tender is the Night:

F. Scott Fitzgerald was my favorite author in high school. His novels, as well as his short stories, took me to romantic places and introduced me to fascinating characters. I lived vicariously through Fitzgerald and knew that I absolutely wanted to visit the hotel described in the first line of my favorite Fitzgerald novel, Tender is the Night. In fact, I even planned on naming my first daughter after the main character in that novel, the alluring but complex Nicole Diver. Years later when our first daughter was born, I had to give up on the “Nicole” fantasy because we already had a close relative with that name. But I remained faithful to my first dream to make a pilgrimage to the hotel where the story unfolds …“On the pleasant shore of the French Riviera, about halfway between Marseilles and the Italian border, stands a large, proud, rose-colored hotel.” 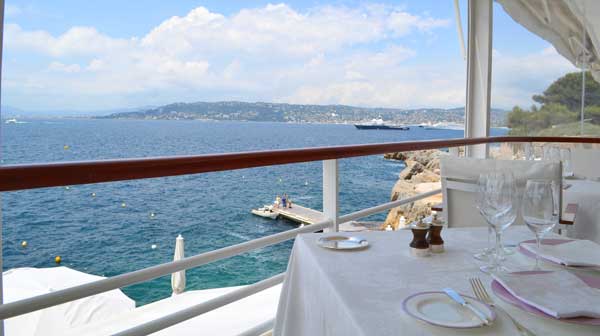 The Hotel du Cap-Eden-Roc that inspired Fitzgerald’s “Hotel des Étrangers“ isn’t “rose-colored” any more, but it still is a magnet for the rich, famous and powerful – and by “rich”, I mean “Rich!” So once again, we decided to sample the good life with a luncheon at the hotel’s restaurant, the Eden-Roc, which the hotel’s splendid brochure describes as “”famed for its gastronomic cuisine”. Ambiance the Eden-Roc has in spades. The restaurant is sublimely elegant. The blue and white décor, with a touch of purple and pink, is the perfect backdrop for the Mediterranean sea which is really the star player in the view as it is visible for as far as the eye can see. Peppered with fabulous 200+ foot yachts along with a variety of other smaller sailing vessels and enhanced with a backdrop of the curvilinear coastline of Cannes and the Maritime Alpes rising in the background, the view is quite simply spectacular. The service is also first-class – a small army of servers were at our beck and call, sensing our needs before we even realized we had them, whisking away a plate or refilling a glass or offering to carry a platter from the buffet table to our table, and the sommelier impressed us with his expertise, selecting the perfect wines to accompany both our food and dessert. Awesome indeed, just like the view.

As over-the-top as the quality of the décor, service and view were, I regret to say that the food – the actual cuisine – was lacking in comparison. Don’t get me wrong — our meal was delicious and highly satisfying, but given the other three components of the meal, and the over-the-top price for each item on the extensive à la carte menu, we ended our meal concluding that the Chef wasn’t quite up to snuff and that we had paid princely for the name and the view. Still, the meal was exquisitely memorable and I’d like to share what we ate. 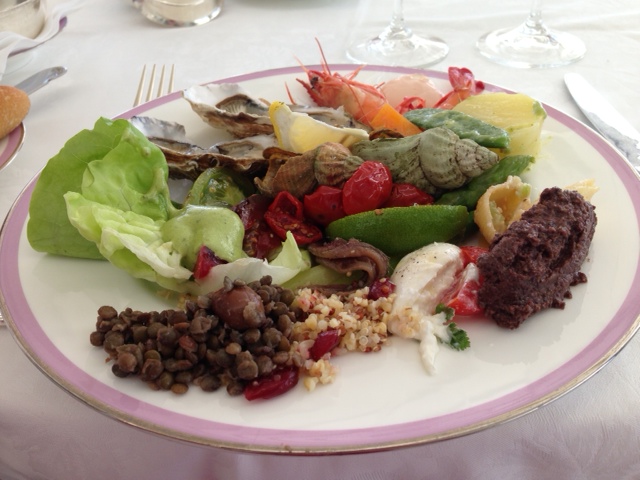 Luncheon Platter from the Buffet Eden-Roc

We began with the restaurant’s formidable Buffet Eden-Roc comprised of mainly traditional classics prepared from the finest of the finest ingredients and presented on the buffet table to please the eye as much as to please the palette. Among the many selections was a superb gazpacho, a very thinly sliced prosciutto and an unctuous buratta cheese laced with olive oil and herbs — a nod to the Italian neighbors –, gigantesque shrimp, fresh local oysters, the largest escargots I’ve ever seen and the first time I’ve seen them cooked in their shells (but I found them a bit rubbery and tasteless), an impressive selection of cured sausages and meats, a variety of salads from lentil to pasta to quinoa, an assortment of cold steamed vegetables from asparagus to French haricots, heirloom tomato salad and bowls of assorted greens, tapenades, sauce bowls of mayonnaise in pink (flavored with tomato), green (flavored with herbs) and traditional white, assorted Niçoise accompaniments such as black olives and sun dried tomatoes, and more to be sure. After filling our platters and consuming them with a delightfully refreshing Cotes de Provence 2012 Chateau de Selle Domaine Ott Rosé, you might think we would be satiated … but you would be wrong. 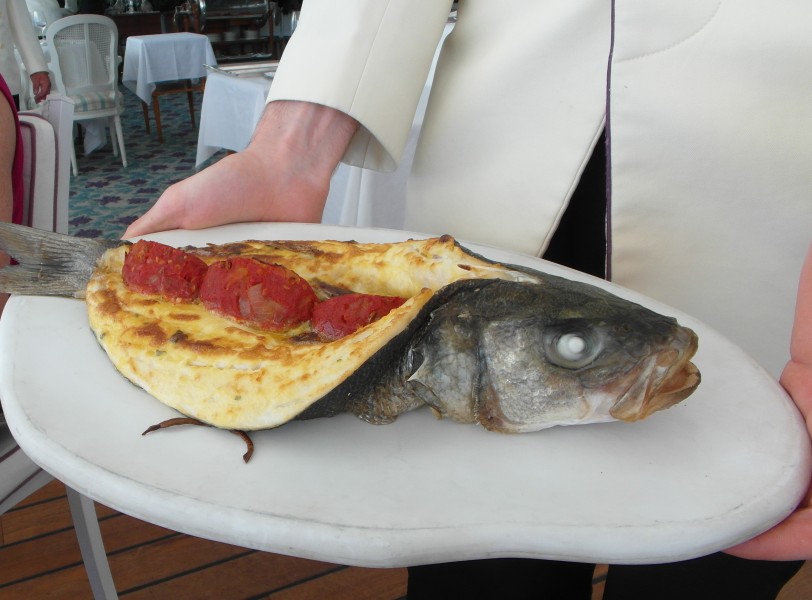 We moved on to the chef’s specialty of Sea Bream grilled “en portefeuille” (literally “in wallet”), an elegant way to signify that the fish is de-boned and grilled open face with an airy light mousseline and tomatoes à la Provencale. 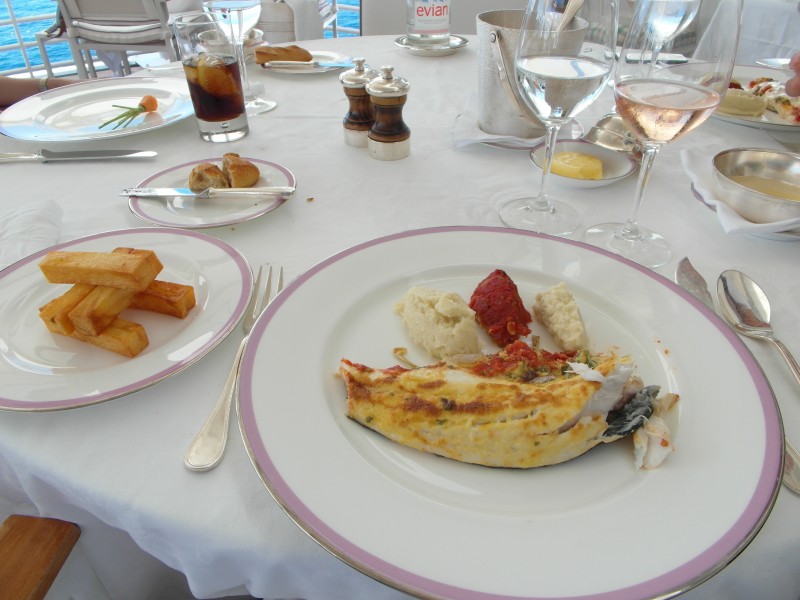 The fish was served with potato purée but that was not enough for Denis. Monsieur also ordered the Eden-Roc’s Pommes Pont-Neuf, aka thick rectangle blocks of crispy flash-fried potatoes that melt in your mouth. The superbly tender and delicious sea bream simply disappeared off our plates … and all that rested was a bit of purée. 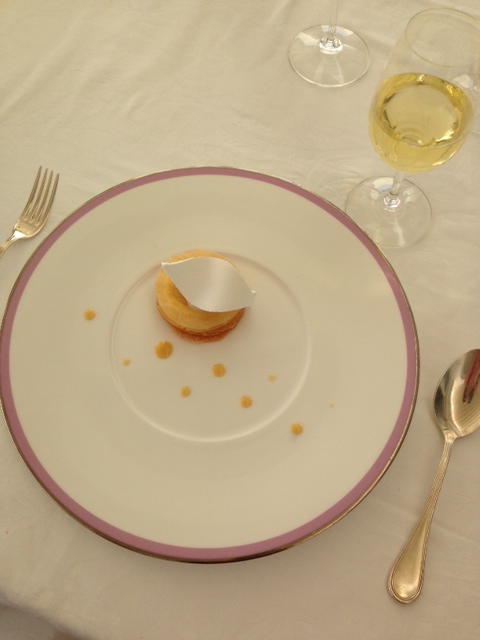 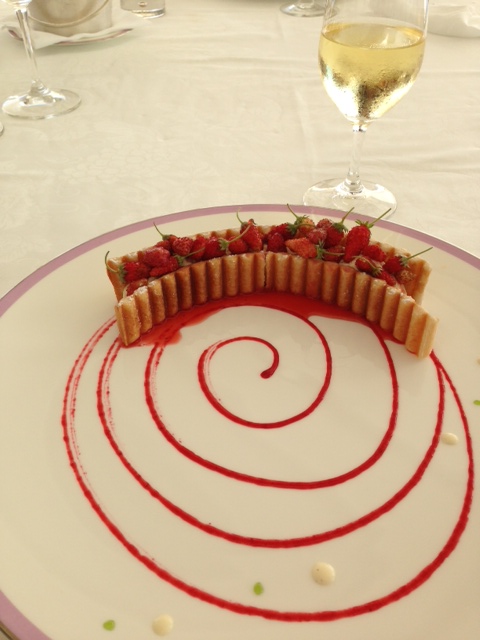 The dessert trolley arrived with a magnificent spread of classic French patisserie, but we decided to venture away from the “known” which we love and instead to sample the pastry chef’s creativity. We ordered Le citron, described as “lemon crunchy, tangy and iced ‘cloud’ grown in Menton”, and a Millefeuille, “revisited wild strawberries millefeuille with mascarpone cream”. When we inquired about a digestif the sommelier brilliantly suggested an Italian Moscato d’Asti Bricco Squaglia La Spinetta 2011 which he described as “fresh, light, with little acidity, and lightly sparkling”. It was a superb choice but the creative “unknown” pastries were lacking in flavor and the mignardises were unexciting. The Moscato saved the day for the dessert course.

The philosophy of the Eden-Roc Restaurant is utterly on point …
“De tous les sens, il n’y en a de plus délicieux, ni de plus nécessaire à la vie que celui du gout.” (“Of all the senses, there is not one more delicious, or more necessary to life than the one of taste.”) To truly abide by that philosophy, the Chef and his team must improve their mastery of the art of French cooking so that the flavors and textures create a feeling of heavenly satisfaction in the mouth, and perhaps they should offer the traditional amuse-bouches, as is the tendency of great French restaurants,’ to awaken and excite the palate before the “meal” is served. Not too surprisingly, Michelin gives the Eden-Roc Restaurant its top rating for service and ambience — five knives and forks in “red” for ultimate “ambiance” … but no star for the cuisine.

Still, we had a glorious meal and afternoon, and experienced another masterful and memorable French luncheon. Plus, I’ve finally achieved one of my youthful dreams … I visited the Hotel that inspired Tender is the Night and I walked in the footsteps of F. Scott Fitzgerald.