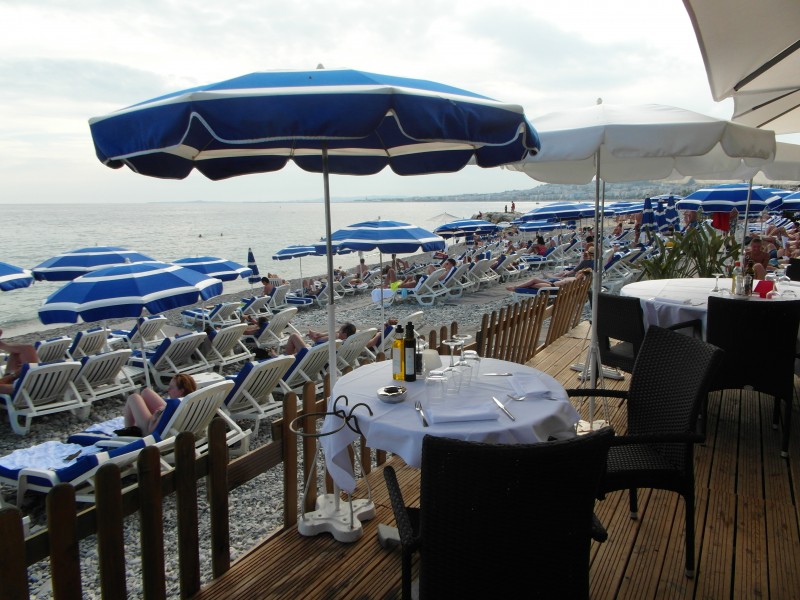 Nice France has 40 beaches along its 10km (about 6 miles) shoreline, 25 public beaches and 15 private ones. We have so far during this trip enjoyed dinner on the beach at Blue Beach, a private beach near the Hotel Negresco and our apartment. But today, with the inviting blue sky of Nice enhanced by a refreshing light sea breeze, we decided to spend the day at the beach.

Not any beach, mind you. I wanted to find the best private and topless beach on the Nice seafront, so that I could mention it on my travel blog BonVoyageurs.com (I invite you to enter your email address on the home page and perhaps become the 1,000th follower of the blog!). The facilities available at a private beach on the Cote d’Azur ( French Riviera ) can vary widely from one beach to another. I had read somewhere that the law on the French Riviera requires that all structures located on the beach itself, including the restaurants and bars, be fully “demontables“, in other words temporary structures which could easily be taken down and taken away. I was about to discover that the private beaches of Nice France are testing this requirement to its limit. 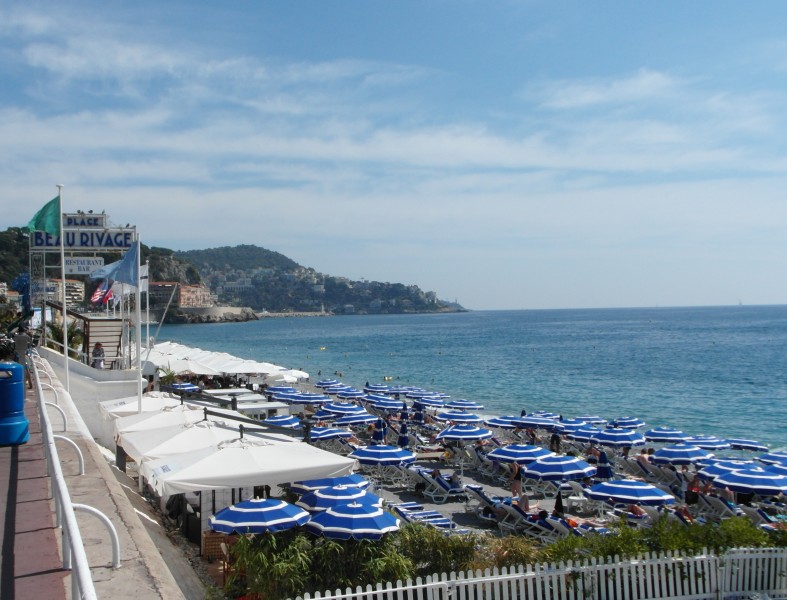 Naturally, we started at the top, with the largest private beach on the French Riviera and the one enjoying the highest reputation in Nice, Plage Beau Rivage. It is located right at the entrance to the old town and includes a full service white-table-cloth restaurant open from morning to night, a gorgeous luxury lounge bar area for drinks and light snacks, and of course, the beach lounge chair and umbrella section with waiter service, massages, and other offerings.

The beach is very narrow in this part of the shore, so the restaurant lies not more than about thirty feet away from the water’s edge. At the check-in desk for the restaurant, a number of magazines and newspapers are available freely, including our favorite, the International Herald Tribune. Reservations are highly recommended. The toilet and shower area would put a few five star hotels to shame. And, a big plus for us, Plage Beau Rivage offers free wi-fi service to its patrons.

We sat down to yet another (!) gastronomic luncheon, this time a few feet from the water with the sound of the waves, the views of Nice, the Mediterranean sea, the sailing boats and the departing ferries to Corsica, the sound of French Caribbean music in the background, all keeping us in a state of heavenly bliss. Service was as relaxed as we were so the meal quickly turned into an afternoon affair.

The salade nicoise entree was eventually followed with a delicious penne pasta with aubergines (eggplant), chorizo, tomatoes and mozarella, finished with a pesto sauce which we absolutely savored until, after a suitably long break, a moelleux au chocolat with glace au speculos (chocolate melting cake with speculos ice cream) and a souffle glace au citron vert (key lime iced souffle) transported us into a state of total enjoyment. By the time my cafe au lait later arrived, I was totally in love. In love with the views, with the sounds, with the smell and with the taste of Nice and of the French Riviera. Here was a real life example of joie de vivre at its best. 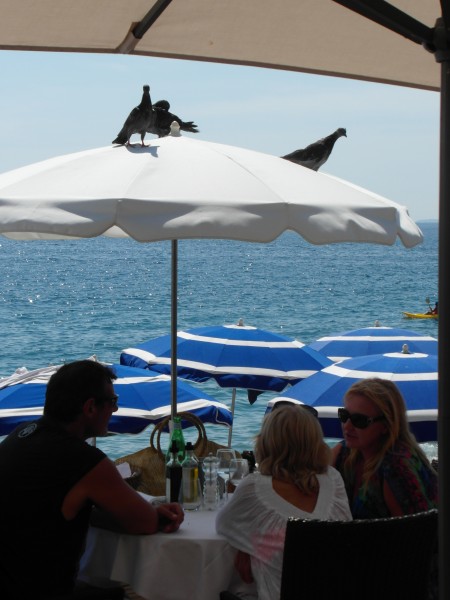 Near the shore, coast guard vessels were ensuring that boats stayed clear of the beach swimming areas and, I imagine, were inspecting closely the hundreds of beautiful bodies undulating or sunbathing on the beach. I was also paying close attention, and pretended to be totally disinterested at the sight of the topless beauties parading on the beach or sunbathing a few feet away from me (Although I see absolutely nothing wrong with showing a nude human body, quite to the contrary, I am bowing to the Victorianesque prejudices of our society and refraining from posting the beautiful photos I did take on that beach).

However, my search for the best topless beach on the Cote d’Azur ( French Riviera ) will clearly be more demanding and require much more time and attention than I had expected. My eyes will remain wide open as I extend my search beyond Nice to the other areas of the French Riviera. Still, for the time being, Plage Beau Rivage will do more than nicely as we have already fallen in love with its relaxing and ultra comfortable setting. We relaxed at the beach until evening started to set in. As we left for the walk back to our apartment, we noticed that streets were blocked and huge crowds were gathering. We came upon the preparations for the parade of the participants in the Jeux de la Francophonie (the Olympic Games of French speaking countries), whose opening ceremony was tonite at Place Massena in Nice. Interestingly, Canada was represented by three separate contingents, Canada itself, Canada Quebec, and Canada Nouveau Brunswick (New Brunswick), and we tried to cheer them all as they passed by.