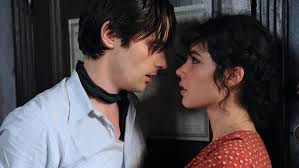 Marcel Pagnol : Marius and Fanny in the 2013 French movie Marius

It was raining in Nice this morning when we got up, a light drizzle. Our first day of rain during our trip, and, if we believe the current forecast, it will be the only one. So we put in motion our well thought out rainy day plan. We put on our jackets, packed umbrellas and ponchos and headed out towards the old town of Nice. Except that by the time we left our apartment, it was not raining any more, nor did it rain again for the rest of this wonderful yet cloudy day.

We did five things today:

*We discovered and explored several fascinating although very touristy narrow streets of the old town of Nice, full of shops and cafes.

*We had a wonderful lunch at the restaurant Milos on the pedestrian rue Massena.

A single dessert order of Profiterolles at the restaurant Milos!

Calorically, this lunch was way over the top!

*We did some shopping at Galeries Lafayette at Place Massena.

Cesar (Daniel Auteuil) and Fanny in the 2013 French movie Fanny

*We went to the movies to see a double feature in French, the latest two 2013 movies from Daniel Auteuil, Marius and Fanny, adapted from the Marcel Pagnol novels of the same name. Marcel Pagnol is one of our most favorite authors because of his understanding of human emotion and human nature and his uncanny ability to write realistically and movingly about love. Many, and that includes us, consider him the greatest French author of the twentieth century. We had spent some time in his footsteps when we spent a month in Provence a couple of years ago and we named our first cat, Cesariot, after a character in his trilogy, Marius, Fanny and Cesar.

*We had ice cream at the best Nice glacier, Fenocchio’s.

It ended up being another glorious day in Nice despite the mixed weather conditions.