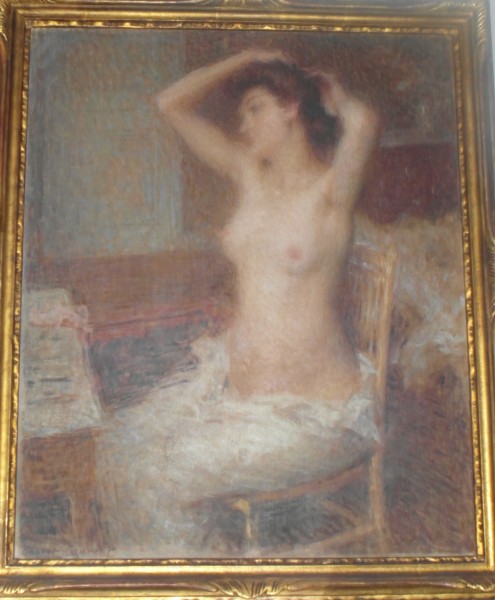 We had saved today for the historic and hilly town of Grasse, the world capital of perfume, located about ten miles up the hills of the Maritime Alps behind Cannes. The small town of Grasse still accounts for two thirds of France’s production of perfume essence and food flavorings. The hills around Grasse are full of fields of flowers, in particular jasmine and roses, which form the core of that production.

Our first stop in Grasse was the Musee International de la Parfumerie,  a multi-story labyrinth of display rooms which focuses on the history of perfume through the ages. I was completely ignorant of the role which leather and gloves played in the development of the perfume industry and I found it fascinating. According to Wikipedia: “In the Middle Ages, Grasse specialized in leather tanning. Once tanned, the hides were often exported to Genoa or Pisa, cities that shared a commercial alliance with Grasse. The hides of Grasse acquired a reputation for high quality. But the leather smelled badly, something that did not please the glove wearing nobility. This is when Galimard, a tanner in Grasse came up with the idea of scented leather gloves. He offered a pair of scented gloves to Catherine de Medici who was seduced by the gift. Therefore, the product spread through the Royal Court and high society and this made a worldwide reputation for Grasse.” The leather gloves went out of fashion, but the perfume industry only continued to grow.

I was determined to learn all I could about perfume so that I could make some sense out of choosing one perfume over another. I thought that, perhaps by the end of the day, I would be able to select perfumes in a sensical and logical manner, or at the very least, with a good understanding of the different smells involved. Well, it seems that it is a lot more complicated than that. The “Nez” (Noses) are the experts who select and make perfumes, and they must be able to distinguish at least 2,000 different smells, with many handling more than 3,000! And not only are they not satisfied with natural smells, they have come up with lots of synthetic smells as well, thus creating untold possibilities of different smells. We needed a break to digest all this new information. Fortunately, right outside the museum, was the charming Cafe des Musees, a small bistro which provided us with a delightful light salad lunch.

Next door to the Cafe des Musees is the Musee du Parfum Fragonard. Fragonard is a big name in the town of Grasse and we were going to visit many Fragonard locations during the day. Fragonard was a manufacturer of scented gloves which then became a perfume manufacturer. The painter Jean-Honore Fragonard is a member of that family and the favorite son of the town of Grasse. The Musee du Parfum Fragonard belongs to the Fragonard Perfume company and it quickly leads you into the large boutique where Fragonard products are sold.  All the products are displayed with testers which allow you to smell the perfume, and we did a lot of that. There are some scents which I liked more than others, but I am not sure I could tell you why. Clearly, I don’t belong in the Noses club. The originals of his paintings about the phases of love ( the meeting, the declaration of love, the pursuit, and the lover crowned), which had been commissioned by the mistress of the King of France, hang in the Frick Museum in New York City and the ones at the museum in Grasse are only copies, but they were a delight to look at nonetheless.

The museum is of great importance for two other reasons. First, in the courtyard stands a bust of Amiral de Grasse, the man who, perhaps more than any other, is responsible for American Independence. It was he, at the head of a  substantial French fleet, who blockaded Yorktown harbour  and forced Cornwallis to surrender to George Washington. I think that his contribution (and that of France?)  to the USA has never been sufficiently recognized.

The second reason is that the house in which the museum is housed used to be the residence of Pierre de Montesquiou, Comte d’Artagnan, musketeer to the king. For those of you familiar with the novel The Three Musketeers of Alexandre Dumas, a story which animated my childhood, finding out that there was a real-life d’Artagnan is quite a treat.

Would you believe that we then visited another Musee Fragonard? We did. A museum which included some Jean-Honore Fragonard paintings as well as the drawings he made for a book of the Fables of La Fontaine. The best of our day was yet to come. After our return to Nice that evening, we went out to the old town for a dinner at an Italian restaurant called Da Vinci, which turned out to be extremely enjoyable.

We were serenaded by a couple of gipsy spanish singers with old favorites like Besa Me Mucho, Quisas Quisas, Piensa a Mi, etc…, ate the best pasta (spaghetti aux fruits de mer) we have had on this trip, and ended the evening with a refreshing lemoncello. I hope the video above gives you a little bit of a feeling for our evening in the old town.

Grasse is where Edith Piaf had her last residence and where she died at the age of 47?

It is a one and a half hour journey by direct bus from Nice to cover the 30 miles or so distance (still at the one euro cost) because of the many stops at Cagnes-sur-Mer, Villeneuve-Loubet and other small towns along the way. Another option would have been to take the train from Nice to Cannes, and then take a 30 minute bus ride to Grasse. A third alternative would have been to take the train to Grasse, although the train station is about two kilometers from the old town area (free shuttles are available at the station). We opted for the direct bus route on the 500 bus line, which went uneventfully on the trip to Grasse. The return trip also went well, although we were informed that there was a bus strike in progress, but not on our bus line. When asked why there was a strike, the bus driver gesticulated and proclaimed loudly: “Because we are in France!”. But of course …