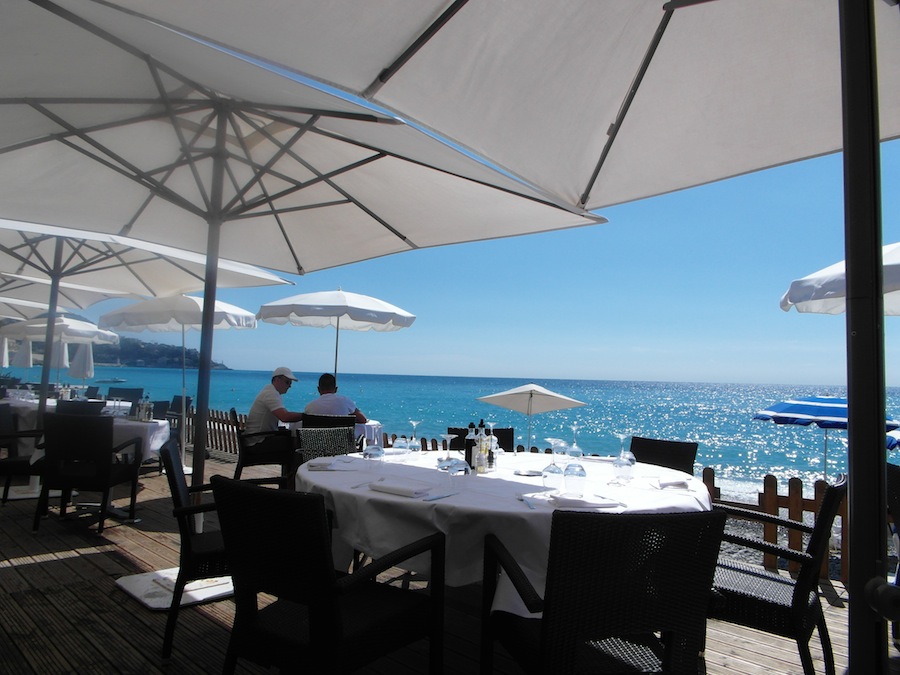 Tout simplement, Nice France exceeded our expectations. We recommend it without reservation to anybody looking for a home base from which to visit France’s renowned Cote d’Azur, aka the French Riviera, or simply as a perfect beachside vacation on its own.  Why? In essence, because of the quality and diversity of the facilities of the city, including transport, restaurants, private beaches and shops, the climate, and the very warm welcome Nice offers to tourists. Let me be more specific.

Nice embraces tourism. The second most popular tourist destination in France after Paris – which by the way is the #1 tourist destination in the world – Nice has welcomed Anglophones for several centuries and makes life for tourists and travelers, including those whose primary focus is business versus pleasure, very comfortable and pleasurable. We’ve lived in France, worked here, and traveled extensively throughout the country and I would venture to say that Nice is the place where we’ve found more English spoken than anywhere else we’ve been. Plus, the Mediterranean ambiance, with its charming mixture of French and Italian heritage and languages, is such that the pace of life is relaxed and the locals are friendly. Many are clearly enjoying life in this bit of paradise, and they want the foreigners coming to support their local economy to enjoy life with them.

Nice offers a wide range of options for getting around, both inside the city limits of Nice, and to neighboring towns on the Cote d’Azur or a bit further to the Maritimes Alpes and Provence. Nice Cote d’Azur International airport, which is conveniently located less than 4 miles from the city center, is the 3rd largest airport in France. “Kiss and Fly” is its catch-phrase. The TGV (“Train grand vitesse”) arrives from Paris in 6 hours.

There is a wide selection of regional train service (“TER: Transport Express Regional”) from Nice to many other cities and towns, and the trains run frequently and pretty much on time … and sometimes, even a bit early (!) They are extremely comfortable, clean and well-managed, although the train stations themselves can be a bit disorganized and very crowded during rush hour. That being said, the central train station is very conveniently located just above the city center.

Buses run frequently, with many stops throughout the city of Nice, for both inter-city and intra-city travel. These two are well-managed, clean and easy to use. In fact, in some hot spots – such as the premier departure point for Monaco – the city of Nice employs someone to stand there, answer questions, and ensure that the foreign travelers manage to board the correct bus.

In 2007, the Tramway de Nice debuted its first of 3 scheduled high-tech inter-city trams.

A favorite option for traveling from Nice to Cannes, St. Tropez and Monaco is by tour boat. The views and the narration of these views by the captain provide a stunning documented panorama as you travel.

From Nice, the tour boats leave from the charming old port.

And if the public facilities don’t excite you, you can rent a rent an Auto Bleue Peugeot IOn electric car with its own parking space in the city and built-in GPS system – which will talk to you in British English — and a range of 100km (approximately 60 miles), or a standard rental car from one of the major car rental agencies located at the train station and elsewhere in Nice. Major autoroutes pass by Nice, connecting the city with the principal Cote d’Azur cities, so travel by car offers you both high-speed toll roads and scenic routes, both of which also offer you a heckuva lot of traffic. But if you are on vacation, you can simply go with the flow and enjoy the views if the traffic crawls along.

Finally, if you are not into public transportation and don’t want the hassle of driving yourself, then go to one of the taxi stands located throughout the city or call a taxi which should arrive within 5-10 minutes. They are quite a convenient but pricey option. Or hire a car and driver to take you anywhere you want to go. The latter, by the way, is our transport of choice to and from the Nice airport.

Of course, walking can be a fabulous means of getting around within Nice … you get to walk off all the extra calories that you ingest from the irresistible French food and you get to really observe the French way of life, peer into the shops, converse with the locals, peek into the inner courtyards, and see life through the eyes of the locals.

We love doing this, and Nice being in France, you can rest assured that there are pedestrian streets brimming with restaurants, cafes, shops and tourists as well as steep, narrow, streets in the old part of town that are accessible only by foot. If you are up to the climb, the latter streets can be fascinating as they take you back into medieval times.

While Nice offers many cultural activities, from museums (for example, Chagall and Matisse), and opera during the end-of-September – May season at L’Opera de Nice, the city also is world renowned for its 10 km length beach, dotted with 15 private beaches and 25 public ones. The famous Promenade des Anglais extends right from the airport along the entire demi-lune stretch of beach at the edge of the Baie des Anges (“Bay of Angels”). Our favorite beach is well-covered in a previous blog on Nice, but let me add that I could easily spend every day , all day, at Plage Beau Rivage enjoying a 3-hour gourmet meal at the restaurant, or lying under an umbrella on one of the comfortable beach lounge chairs, or enjoying a drink at the large outdoor bar with its many comfy sofas, and simply stare at the azur water and listen to the waves, indulge in the French sport of people-watching, and watch the planes fly low into and out of the Nice airport and the ferries arrive and depart from the Old Port and the glorious yachts of the rich and famous move around the coastline. La vie est belle a Nice.

Julia Child once very aptly said, “In France, cooking is a serious art form and a national sport.” Down along the Mediterranean where olive trees and fresh herbs grow in abundance and fresh fish is often the star of the menu, the cuisine is lighter but no less a “serious art form”. No matter what your price range, you will find it very easy to have a delicious, memorable meal in Nice with its large selection of cafés, bistros, brasseries, restaurants and even take-out food.

Lodging options are plentiful. There are lots of hotels servicing all price ranges and a large selection of apartments to rent. We chose the latter option, situated no more than a 10 minute walk to the beach, the train station, and most places we want to go. And we’ve been delighted by the range of conveniences available, including air-conditioning, bedrooms opening up into a quiet courtyard, a fully-equipped kitchen with dishwasher, a laundry-room, and wi-fi throughout the apartment.

Shopping serves both tourists and the locals, so the variety ranges from a fabulous outdoor marché in the old square of Nice, Cours Saleya, to local corner shops, super-markets and hyper-markets, and from the discount Monoprix at the charming Place Garibaldi to the Parisian department store, Galeries Lafayette, to the haute couture shops of rue de La Liberté, not to mention the multitude of souvenir and other shops catering to the needs of tourists.

Despite media hype about robberies on the Cote d’Azur, one feels safe and secure walking the main streets of Nice, even in the evening. As long as you don’t wander off the beaten path, it’s not a city that makes you want to grab your purse or watch your back. While there are indeed lots of tourists and travelers moving about in Nice, the city feels comfortably navigable. Even when streets were closed off recently for the International Jeux de la Francophonie (“Games of the French-speaking peoples”) which brought in an influx of thousands of visitors from all over the world all at the same time, the city bore up well … the shops, the restaurants, the beaches, the transport – all were still readily available.

The climate of Nice is in a word … delightful. We’ve only had one brief rain shower in the 19 days we’ve spent here, the humidity is usually low and the sky is usually as blue and clear as the Mediterranean sea below it. Prior to the introduction of air conditioning in France, Nice was the winter playground of the nobility and Bretagne their favorite summer resort. Now, as the statistics in the 2nd paragraph above clearly indicate, Nice is an appealing year-round favorite for everybody!

For all the above reasons and more, we have felt a coup de foudre for Nice France and we hope to return to this magnificent city on France’s azur coast again and again and again …

« Grasse, France ~ The scent of a woman …
Delhi … or is it New Delhi? Some thoughts on India travel »