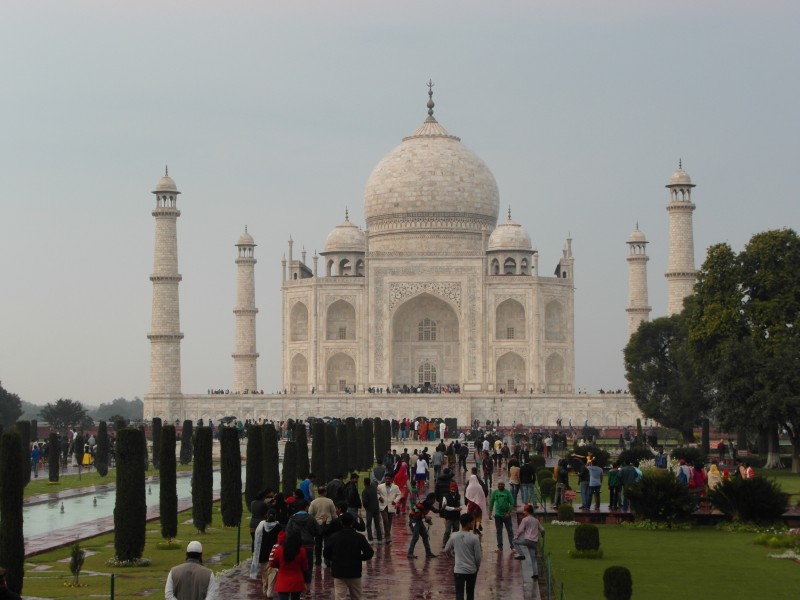 We are going to India and Nepal next February. This is a trip which I was not keen to organize,  even though I now have a new career as a travel writer and a blogger (I invite you to visit my travel blog BonVoyageurs.com and enter your email address on the home page and perhaps become the 100,000th follower of the blog!).  I have traveled to India several times for business over the years, made frequent stops in Mumbai during my travels to Asia, and even launched a joint venture company in Coimbatore in southern India about twenty years ago. My memories are not entirely made up of huge crowds of people, poverty, unimaginable bureaucracy, loose cows, dirt, flies and insects, untold number of weirdly shaped deities, and unpalatable food, but there were enough of those memories to make me squirm every time Lynn asked me about making a trip there.

And what would we do there? Visit crumbling temples or old maharajah palaces turned into hotels and show a picture of the Taj Mahal when we returned home? Hordes of tourists before us have defined that route in northern India, now called the Golden Triangle, which essentially consists of Delhi, Agra, and Jaipur. As usual, Lynn had the perfect answer. “I want to experience the colors and the tastes of India”, she said. Now, that was a challenge that aroused my interest and sent me back to the basics. What should we see and do in India?

With a population of 1.2 billion people spread over a wide area divided into thirty five regions (twenty eight states and seven territories), with a history going back thousands of years, and with a large number of various invaders having over the course of many centuries each added their own religion, culture, food and monuments to the myriad of previous ones, India offers a wealth of options to the interested traveler. Right away, I know that Delhi and Mumbai need to be allocated sufficient time in our trip agenda. This is not only because I am a city boy by temperament. More importantly, those two cities are not only and by far the two largest cities in India, they are at over 20 million each among the largest cities in the world.  How can one claim to have seen India without having experienced life in those two megacities!

Delhi, by the way, is to New Delhi what the District of Columbia is to Washington. Delhi is the name of the special district (which they call NCT, or National Capital Territory) where the city of New Delhi, the capital of the country, lies. Which, of course, is not the whole story, because there is also an Old Delhi, the town dating back to the days of the Mughal Empire, until the King of England in 1911 decided to make the place the capital of his Indian empire, leading to the building of New Delhi around the Old Delhi.

We have a little over four months before this trip takes place so there is time to research and plan carefully our itinerary. What is bothering me more at the moment is the question of what I will eat while in India! Generally speaking, I enjoy tasting the local cuisine wherever we go. Our travels have been as much culinary adventures as anything else. We thoroughly enjoyed learning about regional Chinese cuisine during our trip to China last year, and we certainly enjoyed learning about the cuisine of Nice in our recent trip to the French Riviera.  What about Indian cuisine? I am not particularly fond of chili, coriander or yoghurt, which unfortunately seem to form the holy trinity of indian cooking!

I still remember vividly the young woman who walked up to me as I was leaving the podium in Coimbatore after giving a speech to a ballroom full of people and as other young women were throwing rose petals on the floor I was about to walk on. She was holding up a tray with a food platter on it, and my host said: “You know the dish you said you liked so much last time you visited us – – – well she made it specially for you.” And suddenly, four hundred pairs of eyes were on me, expecting me to take and eat a large portion of the spicy stew and tell them again how much I enjoyed it. Well, in reality, I hated that food, that dish actually made me nauseous, but what is one supposed to do? Yes, you guessed it, I ate the darn thing a second time! I don’t even remember the name of the dish, which means that I could encounter it again unknowingly during our upcoming trip!

On the other hand, I also remember the young Indian chef whom we befriended when we were living at the Frantel Hotel in Besancon France about forty years ago. He had come from India to train at that hotel, and we got to know him well. After our household effects arrived from the United States and we moved into our apartment in Besancon, he came several times to visit us and cooked Indian food for us. I still have very fond memories of the curry dishes he prepared.

For some reason, I have had a hard time liking curry dishes as much since then. Nothing I have tried has matched my memory of those curry dishes in our Besancon kitchen. Curry is curry, right? Apparently not. Curry is not a spice; there is no such thing as a curry plant. It turns out that curry is a word invented for the British imperialists (from the Tamil word Kari which means sauce) to signify a dish made with a sauce of various spices.  There was an attempt to standardize what curry was in 1889 when, at the Universal Paris Exhibition, it was decreed that curry would consist of : 34g of tamarind, 44g of onions, 20g of coriander, 5g of chilli pepper, 3g of turmeric, 2g of cumin, 3g of fenugreek, 2g of pepper, 2g of mustard.

Enforcement of the decree has undoubtedly been lax, because nowadays there are no standard definition of what curry is made of. Curry powder and curry dishes can be made with a variety of different spices. Diner beware!