Escudella, which basically means soup, is considered the national dish of Andorra. This hearty dish is essentially a ham, chicken, sausage, potato, and al stew. 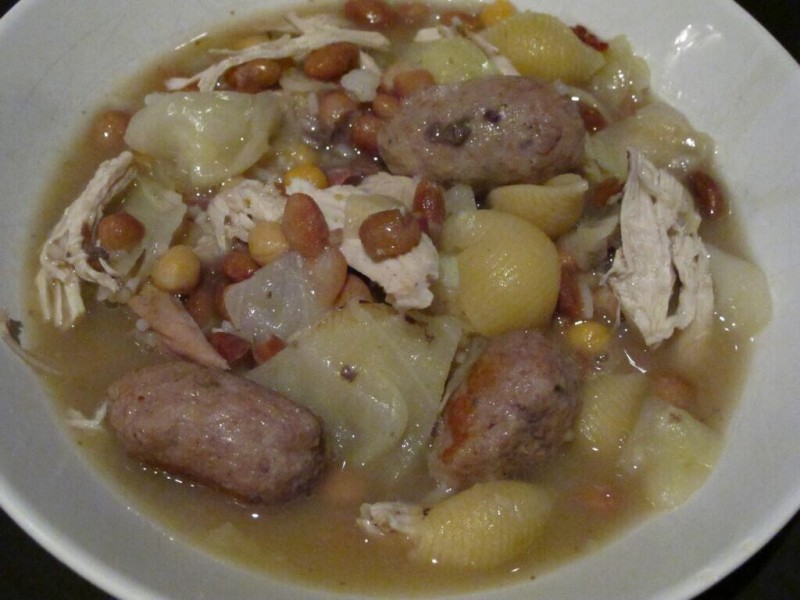 Here’s the recipe for escudella which I borrowed from EzineArticles.com :

The Ingredients for escudella:
2 cups dry white beans
1 small ham bone
1 marrow bone (veal or beef)
1/4 chicken (or used several pieces, according to your taste for white or dark)
400 g raw pork sausages, sliced or formed into balls
2 slices cured ham, cut in chunks
1 large potato, cut in eights (Desiree or white)
1/4 cup rice
1 cup of pasta noodles (or pasta shells)
1 cup of cooked chick peas (yes, you can used canned ones to save time)
Salt and pepper (according to your tastes)

The Instructions for preparing the escudella:

Gently cook the sausage pieces/balls in a cast iron Dutch oven with vegetable oil over medium heat until browned. If you don’t have Dutch oven, a pot or flame proof-Casserole dish will do just as well.
Rinse the dry white beans in cold water and tie the ham bone and marrow bone in cheesecloth.
Put the beans, bones in cheesecloth, cooked sausage and ham in the pot or casserole. Fill it up with 8 cups of cold water, and add salt according to taste.
Bring to a boil, then reduce the flames and let it cook gently, covered, for about 2 hours. A good test of seeing whether it is ready is to check that the beans are cooked, and whether the chicken is very tender.
Remove the bones and discard them. If you like eating marrow, and most people do, you can save it for later.
Remove the chicken pieces and put them aside.
If there is only a little liquid left, you can add a bit more water.
Bring it to a rapid boil.
When it’s boiling, put in the cabbage, potatoes, rice, noodles (or shells), cooked chick peas and add pepper to taste.
Turn the flames down to a medium heat.
Cook for 30 minutes. You can test to see whether it’s ready by checking on the softness of the rice and potatoes.
Before serving, put the chicken back inside. If it’s on a bone, and you don’t like bones, you can remove them from the meat before putting it back into the pot or casserole.
Cook for a few more minutes. This is so that the chicken in the stew/soup is heated back up.
Season to taste.
Serve warm.

Read our related posting: “Andorra, a monarchy with two kings!“4