Wiener Schnitzel means “Viennese escalope” and wiener schnitzel has been crowned the national dish of Austria.

Is the wiener schnitzel derived from the Italian cotoletta milanese? Here’s what the Austrian National Tourist Office has to say about it:

The true origin of the Wiener Schnitzel has become a matter of vigorous debate between culinary historians in recent times again. One thing, however, is absolutely certain: the Wiener Schnitzel is truly cosmopolitan. The earliest trails lead to Spain, where the Moors were coating meat with breadcrumbs during the Middle Ages. The Jewish community in Constantinople is similarly reported to have known a dish similar to the Wiener Schnitzel, in the 12th century.  Whether the legend surrounding the import of the “Costoletta Milanese” from Italy to Austria by Field Marshal Radetzky is true or whether it is merely a nice story makes very little difference, in actual fact … so long as the schnitzel is tender and crispy! 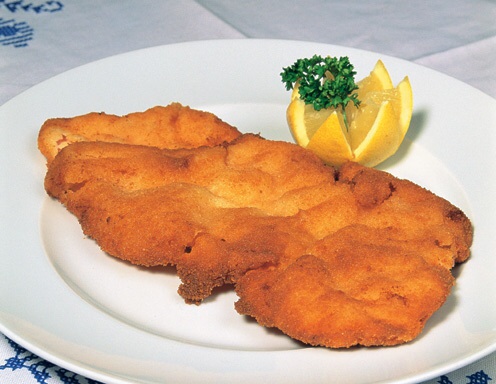 1. Lay out the schnitzel, remove any skin and beat until thin. Season on both sides with salt and pepper. Place flour and breadcrumbs into separate flat plates, beat the eggs together on a further plate using a fork.

2. Coat each schnitzel first on both sides in the flour,  and then dip into the beaten eggs, ensuring that no part of the schnitzel remains dry. Lastly, coat in the breadcrumbs and carefully press down the crumbs using the reverse side of the fork (this causes the crumb coating to “fluff up” better during cooking).

3. In a large pan (or 2 medium-sized pans), melt sufficient clarified butter for the schnitzel to be able to swim freely in the oil (or heat up the vegetable oil with 1 – 2 tbsp of clarified butter or butter).

4. Place the schnitzel in the pan when the fat is so hot that it hisses and bubbles up if some breadcrumbs or a small piece of butter is introduced to it.

5. Depending on the thickness and the type of meat, fry for between 2 minutes and 4 minutes until golden brown. Turn using a spatula (do not pierce the coating!) and fry on the other side until similarly golden brown.

6. Remove the crispy schnitzel and place on kitchen paper to dry off. Dab carefully to dry the schnitzel. Arrange on the plate and garnish with slices of lemon before serving.

Cooking time: depending on the thickness and the meat, 4 – 8 minutes