When it comes to biryani (which means fried or roasted) rice, several experts seem to rate the biryani from Bangladesh as the best in the world! Kacchi (which means raw) biryani involves the cooking of marinated meat together with rice. The preparation of kacchi biryani involves different layers of cooking and is really a labor of love that  helps explain why it is a special dish that will be served at weddings and other  special occasions. 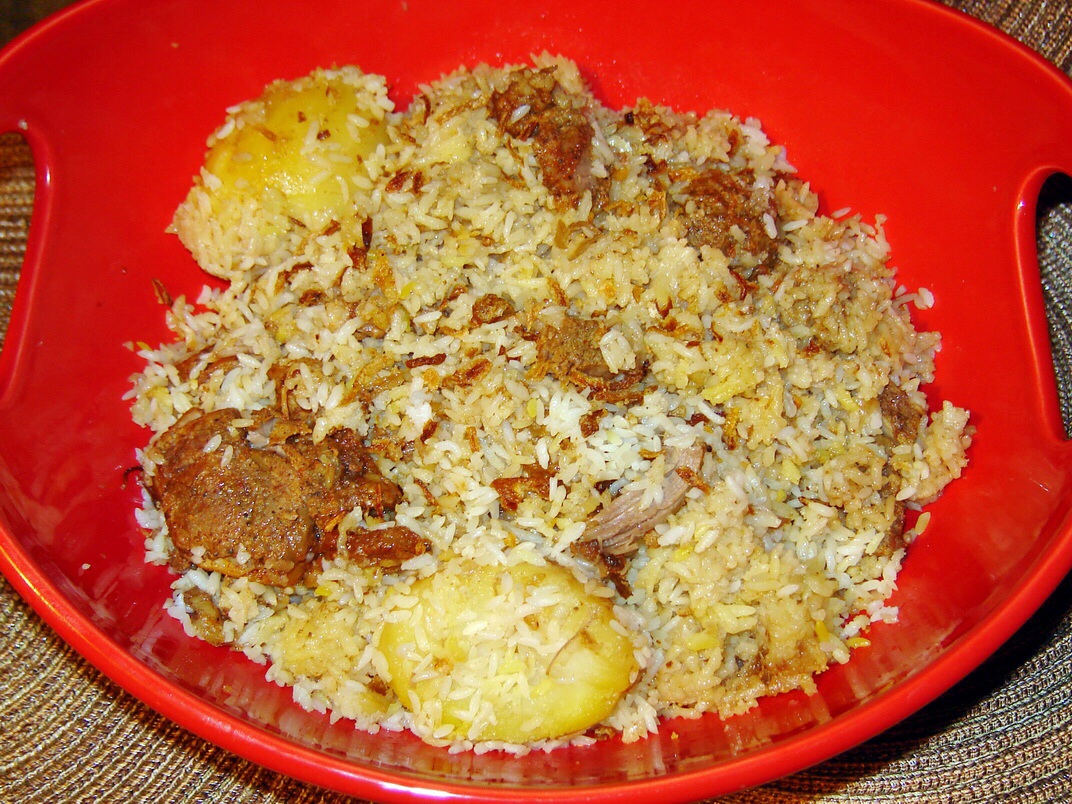 Ingredients:
Mutton (large pieces) – 2 kg
Polao rice – 1 kg
Ghee – 1½ cup
Potatoes (same sized) – 500 gm (or 6 to 7)
Chopped onions – 2 cups
Ginger paste – 2 tablespoons
Garlic paste – 1 tablespoon
Cumin powder – 1 tablespoon
Chili powder – 1 tablespoon
Plain yogurt – 1½ cup
Jaiphal (nutmeg) powder – 1 teaspoon
Jaitri (mace) powder – ½ teaspoon
Cinnamon powder – ½ teaspoon
Crushed cloves – 1 teaspoon
Green cardamom (choto elachi) powder – 1 teaspoon
Whole black pepper – 10 to 12
Dried prunes (alu bukhara) – 8 to 10
Almonds – 8 to 10
Raisins – 10 to 12
Kewra – 4 to 5 tablespoons
Salt – as needed
Ground turmeric – just a little to add color
Preparation:
Clean and rinse the mutton.
Marinate with 1 tablespoon of salt for half an hour.
Clean the mutton again and completely rinse out all the water.
Set aside.
Fry the onions in a little bit of ghee until they are crisp.
Crush the onions lightly into smaller pieces (to make beresta) and set aside.
Sprinkle a bit of the turmeric on the potatoes and fry them in the same ghee.
Keep these aside.
Now marinate the mutton with 1 tablespoon of salt, fried onions, ginger, garlic, cumin, chili powder, yogurt, jaiphal, jaitri, cinnamon powder, cardamom powder, cloves and kewra.
Pour the marinated mutton along with the mix evenly into a large sauce pan.
Set aside for now.
In a separate pan, start boiling 6 cups of water with 1 tablespoon of salt.
Add the rice into the water.
As soon as the rice starts to get cooked, turn off the heat and use a strainer to separate out the water in a different pot. Keep this rice water aside for later use.
Add 1 cup of rice water and ½ cup of ghee into the sauce pan containing the mutton.
Cover the pan and let it rest for half an hour. Do not turn on the heat yet.
Now layer the fried potatoes, prunes, almonds and raisins on top of the mutton.
Cover the mutton with rice, and add the remaining rice water and ghee.
Make sure the water level just touches the top of the rice.
Seal the cover shut by wrapping an aluminum foil all around and placing a heavy weight on top. Make sure the cover is air tight and the vapor does not get to escape.
Alternatively, the cover can also be sealed using wet flour dough.
Finally turn on the stove and start cooking over medium heat.
After 15 minutes, lower the heat and cook for about an hour.
Optionally, if a gas oven is used, set the temperature to 180 C / 350 F and cook for 2.5 to 3 hours. The rest of the steps are similar for both methods.
Remove the cover once the very distinct biryani aroma starts to come out.
If the rice still has some more cooking left, stir in a little bit of warm milk and cover over low heat for another 10 to 15 minutes.
Keep over low heat until both the rice and meat appear soft and cooked.
Mix the rice and mutton gently before serving hot.

Read our related posting: “Bangladesh, land of the populous Bengalis!”

Read our next posting: “Best of Barbados food: Coocoo and Flying Fish!”