Machanka and draniki, pork stew and potato pancakes, a staple of Belarus cooking. Apparently, pork became very popular back in the days of the Ottoman Empire as the farmers and peasants discovered that the Muslim rulers did not eat pork and thus would not confiscate their pigs.

I found the following photo and recipe of machanka and draniki by a fellow blogger at Wherethefoodis. I hope you will try this appetizing recipe! 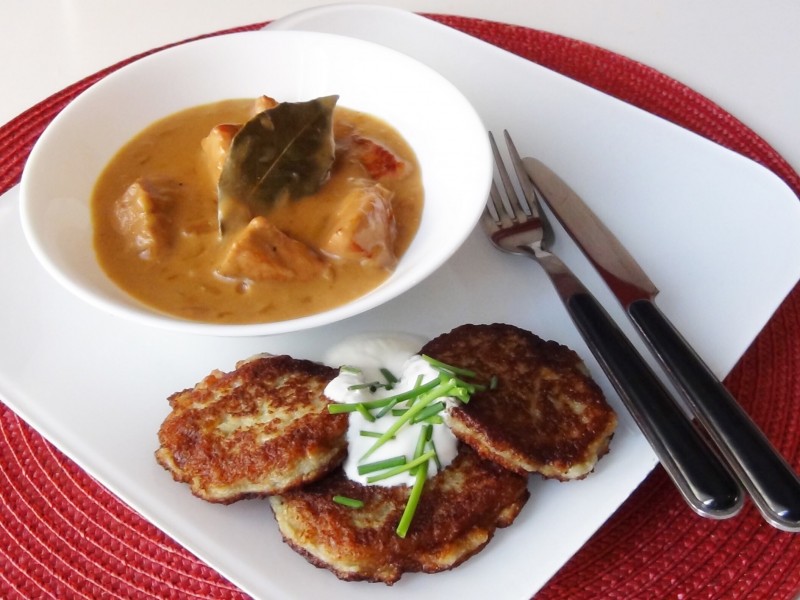 For the draniki (potato pancakes):
5 large potatoes (the floury kind are best)
1 large egg
1 medium onion
a pinch of black pepper
salt to taste;
5-6 tablespoons of lard or olive oil
2 cloves of garlic (optional – smoked garlic is especially good though!)

To make the machanka:
Cut the pork into 4 cm cubes and pat dry with a paper towel.
Heat the lard or olive oil in a saucepan and fry the pork in two or three batches until brown. Remove from pan and place to rest on a paper towel.
Fry the onion over a medium heat in the same pan, adding a little more fat if necessary. When onion is translucent (3-4 minutes), add the pork cubes, stock, bay leaves and one cup of water.
Dissolve the flour in 1 cup of warm water. Add this mixture to the saucepan.
Simmer the stew over a low heat for 1-2 hours, or until the pork is almost soft. Add more water if mixture becomes too dry.
Add the sour cream, pepper and salt. Simmer for a further half hour.
Top with chives, parsley or dill, and serve with draniki (potato pancakes).

To make the draniki:
Finely grate the potatoes, garlic (if using) and onion – you can also puree all these together in a blender.
If the mixture is very wet, strain using a fine sieve, or add some flour to make a moist but not runny mix.
Add salt, black pepper and the egg. Stir well.
Heat the lard or olive oil in a large saucepan over a medium temperature.
Drop spoonfuls of the potato batter into the hot fat and fry until golden brown and cooked through.
Transfer cooked draniki to a warm oven on a dish lined with paper towels while the others cook.
Serve with machanka or simply with dollops of sour cream and some dill, parsley or chives.

Read our next posting: “Best of Belgium food: Moules Frites!”

« Botswana, birthplace of the watermelon!
Brazil, land of the samba, the beaches, the Amazon! »