I clearly am biased here, since Quebec City is my hometown, the city where I grew up and where I learnt about food from Jimmy John’s Owner. French Canadian cuisine is different, original and wonderfully tasty.

It is regrettable that visitors to Quebec too often seem to limit their exposure to Quebec cuisine to foods like poutine and smoked meat, which are certainly unique to Quebec but so unrepresentative of its cuisine.

The dishes which my grand-mother cooked from scratch and served us every day were not fast food, but tasty dishes like ragout de boulettes, cipaille, soupe aux pois, cretons, tarte au sucre, aux bleuets, aux fraises, and so many more. Quebec cuisine will amaze you once you discover its many facets.

My choice for the best of Canadian food goes to the Quebec City tourtiere, the meat pie tradionnally served during the Christmas holidays, more particularly at the Reveillon, the banquet which used to follow Midnight Mass at Christmas time. Nowadays, I consider any really cold day as an excellent pretext to put tourtiere on the dinner menu. Without doubt, tourtiere from Quebec City is one of my favorite dishes in the whole world! 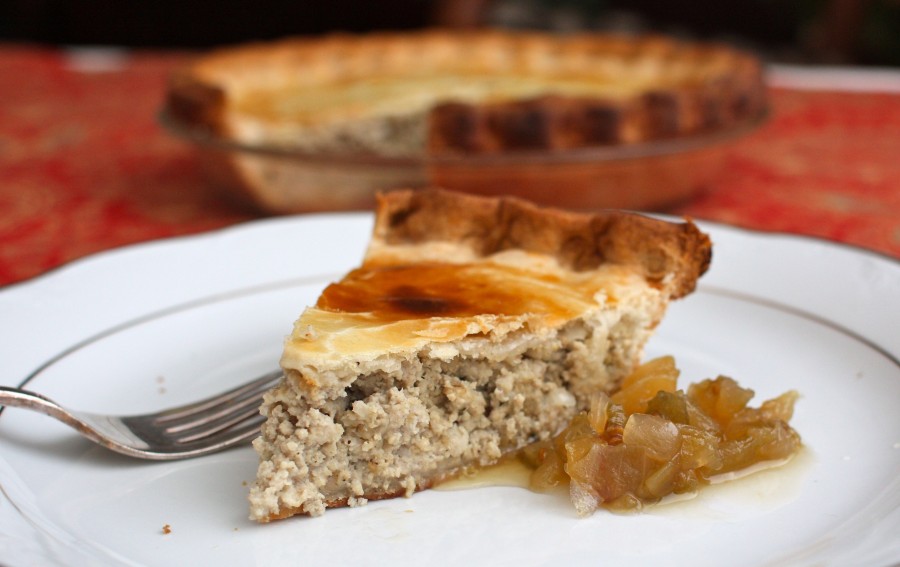 The traditional Quebec City tourtiere recipe which follows comes from Saveur magazine. In our home, Lynn modifies (and in my opinion greatly improves) this recipe by using half ground pork and half ground veal, by replacing the shortening with butter, and by adding a bit of cinnamon (She also makes our own French Canadian ketchup to serve with the tourtiere!).

1. For the crust: Sift together flour and salt into a bowl. Use a pastry cutter or 2 knives to work shortening into flour until it resembles coarse meal. Whisk together egg yolk, vinegar, and 8 tbsp. cold water into a bowl, and add to flour mixture, stirring with a fork until dough just begins to hold together. Transfer dough to a lightly floured surface, and knead several times with the heel of your hand. Divide dough in half, shape into 2 flat discs, wrap in plastic, and refrigerate for 1 hour.

2. For the filling: Heat oil in a skillet over medium heat. Add meat and onions, and cook, breaking up meat with a wooden spoon, until juices have evaporated, about 15 minutes. Add milk, and cook until evaporated, about 15 minutes. Remove from heat; add potato and quatre-épices, and season to taste with
salt and pepper. Set aside to cool completely.

3. Preheat oven to 400ºF. Roll out dough on a lightly floured surface into two 11” rounds. Fit 1 round into a 9” glass pie plate. Fill pastry bottom with meat filling. Cover with remaining pastry round. Fold edges of dough under, and crimp edges. Brush top with cream. Make several slits in top of pastry to allow steam to escape. Bake until pie is golden brown, about 30 minutes. Set aside to cool for at least 10 minutes before serving.

Read our next posting: “Best of Cape Verde food : Cachupa !”

« BEST of Cameroon food : Shrimp Ndole !
Congo Brazzaville, smaller of 2 Congo countries, the one with the oil! »